Cocktail of the Week: The Highball Gimlet

Annie Hayes
No Comments on Cocktail of the Week: The Highball Gimlet

This week’s Cocktail of the Week is the Highball Gimlet – a mouth-watering Mediterranean take on the classic, reimagined by renowned Athens-based bar The Clumsies. Here, we chat with co-owner Vasilis Kyritsis ahead of the team’s five-day residency at London rooftop bar Madison…

The Highball Gimlet is a timely tipple, since it marks the UK arrival of the team behind all-day cocktail bar The Clumsies – currently sitting pretty in sixth place in the World’s 50 Best Bar Awards – who have touched down in the capital for a one-off and rather exclusive residency at Madison from Monday 24 to Friday 28 February. 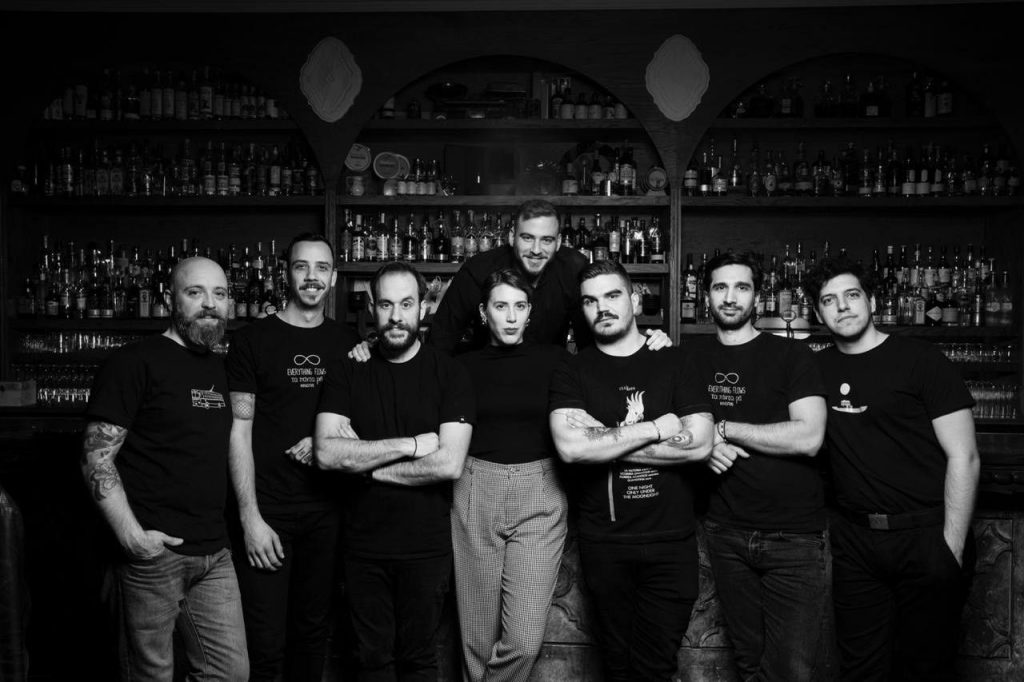 Set in a three-story townhouse that dates back to 1919, The Clumsies is known for its hospitality and charm, homely-yet-refined Greek food, and pioneering conceptual cocktail menus. And now, the team behind the Athens mainstay are bringing their creative flair to the penthouse spot of One New Change, a shopping centre in the City of London.

Teamwork, Clumsies co-owner Vasilis Kyritsis emphasises, is at the heart of The Clumsies operation, in particular their approach to conceptualising and bringing to life each cocktail list – from 2015’s colour palate menu ‘Kaleidoscope’, to ‘Genesis’ in 2017, which was inspired by art and Greek words.  “The whole team is working on the concept for every menu, which changes every year,” he explains. “We always want to include a concept behind our drinks, because we’re staying creative, and [it keeps] our customers interested – what are we going to do to the next menu?”

Taking over Madison, Kyritsis will shake up the bar’s offering with five Grecian creations inspired by current menu ‘Revisited’, which sees the Athens stalwart’s greatest drinks refined even further. “We’ve taken some of our top-selling drinks and favourite recipes from past menus and reviewed them, or reconstructed them, in a different way,” Kyritsis explains. “We’ve given them the same identity but changed the style of the cocktail”.  He went on to say: “The menu that we’ve created for the pop-up in Madison is customised from this menu, Revisited, that we have at The Clumsies,” he continues. “It’s a showcase of what we do at The Clumsies, as cocktails, as inspiration, and the whole design.” 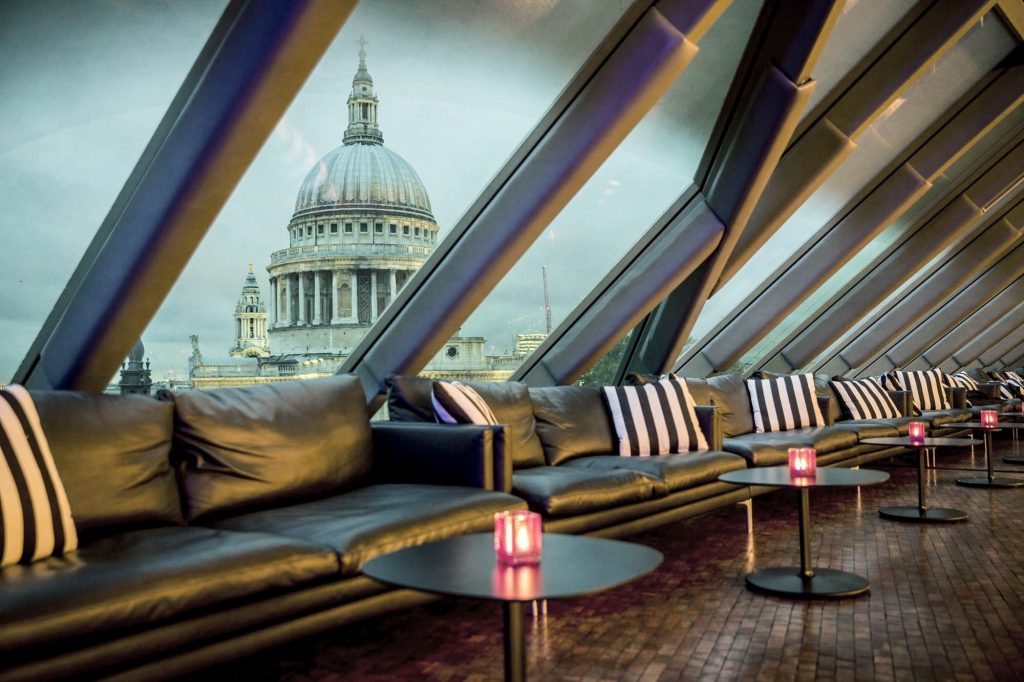 View from the Madison in London. Very nice!

Our pick of the list is the immensely refreshing and flavourful Highball Gimlet. Hailing from The Clumsies’ Colour & Taste Guide concept menu from 2014, the drink is served fresh and tall in a Collins glass and garnished with a green olive. This long, fizzy twist on the classic gin-and-lime juice Gimlet combination sees Tanqueray’s citrusy No. Ten gin lifted further with lemon and lime-infused Ketel One Citroen and balanced out with herbal, earthy wild greens and rosemary, with a touch of bitter-sweet grapefruit. Just delicious.

Further down the list you’ll find the Aegean Negroni, which combines Tanqueray No.Ten, blended vermouth, Martini Bitter, fennel seeds, and diktamus (a native Greek plant) and the Seasonal Daiquiri, a blend of Havana 3 Year Old, pear, apple, cherry, and lime. There’s also the New Fashioned, a mix of Bulleit Bourbon, salted caramel, and citric bitters; and The Conch, which contains Otto’s Athens Vermouth, mezcal, salicornia (another edible plant), and lemon, to round off the limited edition menu.

Ever since The Clumsies was co-founded by Kyritsis and fellow bartender Nikos Bakoulis in 2012, its menu has received international acclaim – shining a light on the burgeoning brilliance of Athens’ bar scene. “A lot of people visiting Athens now from our industry say that it’s one of the most inspirational and high-end bar scenes that you can find all over the world,” says Kyritsis. “At the same time you can find a good combination of restaurants – high-end restaurants, local restaurants – and coffee shops; coffee is becoming bigger and bigger in Athens,” he continues. “I definitely believe that it’s one of the most interesting and innovative scenes all around the world.” 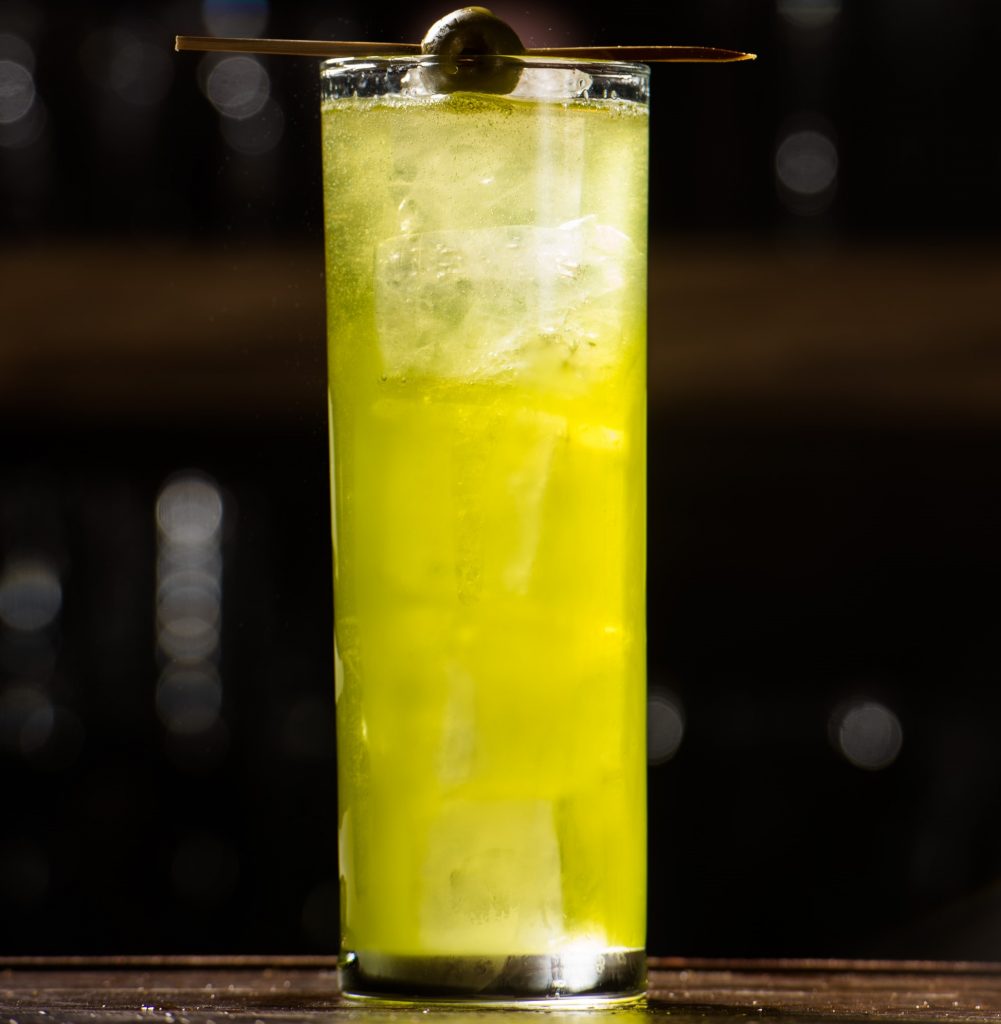 It’s a Highball crossed with Gimlet. What are we going to call it?

Right, that’s enough about The Clumsies, let’s make a cocktail!

Put all ingredients – apart from the tonic – into a shaker and shake them for 10 seconds. Then double strain into a Collins glass filled with ice, and top up with the tonic. Garnish with a green olive.

Explore the world via your tasting glass!