Cocktail of the Week: the Gulliver’s Travels

Henry Jeffreys
No Comments on Cocktail of the Week: the Gulliver’s Travels

It’s often overlooked in preference to rye or bourbon, but Irish whiskey can be a great mixer. This week’s recipe is doubly Irish as it’s not only made with an Irish whiskey, Knappogue Castle 12 Year Old, but also named after one of the great works of Irish literature, Swift’s Gulliver’s Travels. It was created at the Underdog, a bar located right at the tip of Manhattan island in Battery Park. Its creator Sam Stepney began tending bar with a stint at TGI Fridays. Not very cool but a surprising number of successful bartenders got their break at this chain.

From there he moved to a bar on Staten Island with the tremendous name of Bootleg Mannings. Stepney said: “It was essentially a massive warehouse converted into a sports bar with a stage and outdoor space. The owner/manager at the time wished for Bootlegs to be a whiskey/craft beer bar and then proceeded to will it into being. During this process, as I learned more and more about whiskey, craft beer, and now classic cocktails, I was eventually inspired to make my first original cocktail which was a riff on an Aviation called the Frequent Flyer”.

Then three years ago he moved to Underdog, a Manhattan stalwart since 2013. He loves working in New York because “it is constantly growing and evolving. But unlike some other big cocktail cities, we champion the classics, and the heritage of the golden age of the cocktail in New York without being swayed too much by trends or gimmicks.”

The idea for the Gulliver’s Travels came from working at Underdog: “This particular menu needed a stirred and boozy cocktail that was not a Manhattan or an Old Fashioned variation”, he said. “I wanted to do something that would be strong but also accessible, bright, and maybe a little elegant. Essentially, I came up with a more spirit-forward reimagining of a Corpse Reviver #2 or 20th Century cocktail.” 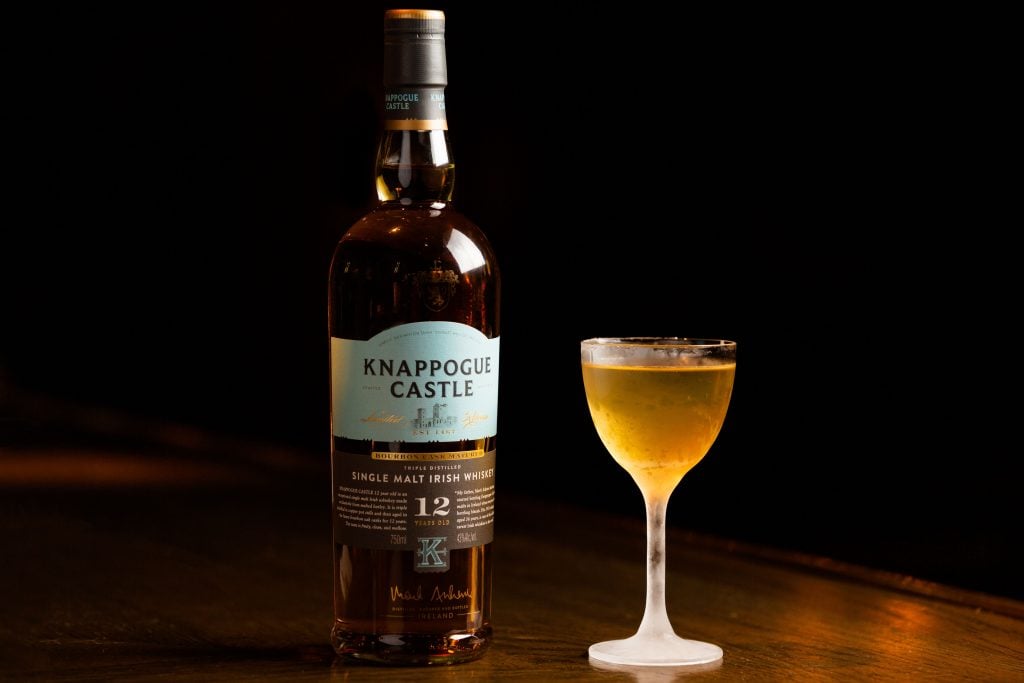 He went on to explain some of the flavours in his choice of Irish whiskey: “I found myself picking up a ton of chocolate, banana and orange notes”, hence the use of creme de cacao and banane du Brésil, “I wanted to augment those notes but only enough to make sure that Knappogue 12 was still lead vocals. I love Lillet, it is one of the few modifiers that I will willingly drink straight, and it has that nice touch of lime/orange citrus that I was looking for.”

He also recommends the 12 year old Marsala cask expression from Knappogue but it’s not all about Irish whiskey: “My other favorites generally rotate during the seasons and whether I’m on vacation or not, but since the pandemic has exiled me to Staten Island, this lockdown has been appropriately rum-heavy”, he said. “The most used bottles at the bar are Cynar and rye to make Ryenar shots for the guests, and at home it’s typically a nice overproof rum, probably Wray & Nephew.” Sounds like he’s doing lockdown in style.

Right, here’s how to make a Gulliver’s Travels:

Add ingredients to an ice-filled shaker, stir until cold and strain into a chilled Nick & Nora glass. Express oil from lemon peel and discard.

Get a head start on Father's Day!