Cocktail of the Week: The Brandy and Soda

Henry Jeffreys
No Comments on Cocktail of the Week: The Brandy and Soda

It’s revival week here at Master of Malt. Not only are we reviving a classic pre-dinner aperitif but we’re making it with an old brand of Cognac that has just been relaunched.

Christmas is going to be a bit different this year but I’ve been musing on Christmases past when we used to have the whole family over for the big day. My brother and I would help my father make drinks. It was a complicated process because everyone seemed to have their own special drinks which had to be made the right way: my grandmother with her Whisky and Soda which had to be made with Famous Grouse; her husband, my grandfather, drank Brandy and Soda; then there was my aunt with her Tequila slammers.

You can date my grandfather pretty accurately by his drink. The Brandy and Soda, or B&S as it was known, was the drink for the bright young things before the war. There’s a famous exchange between Jeeves and Bertie Wooster in PG Wodehouse’s The Inimitable Jeeves:

Now, I’m not sure my grandfather was ever a bright young thing like Bertie Wooster, though he did once win a Charleston competition.

This burst of Yuletide nostalgia has been brought about by the arrival of a new brand of Cognac at MoM towers. It’s called Seignette VS and it’s from Sazerac, the company behind Peychaud’s Bitters, Buffalo Trace and, of course, Sazerac itself. Clive Carpenter, general manager of Domaine Sazerac de Segonzac, explained: “Any new product launch is an exciting moment and for us launching Seignette in the UK has an extra special meaning. We are bringing this historic brand back to the country where it was most in-demand in the 19th century.”

The Seignette family’s history in the region can be traced back to the 17th century. The brand itself was founded in 1804 by Arzac Seignette and, according to the bumf, “became one of the leading brands of the 19th century”. It’s not clear how much the revived brand has to do with the old version but it’s a nice marketing angle. Which is fine, because this is a brand that is designed to look gorgeous on the bar with it’s striking swan label and tall clear glass bottle As Clive Carpenter said: “This is a Cognac for those people who think Cognac isn’t for them.” Happily it tastes good too. As a VS, it has a minimum age of two years so there are lots of fruit young brandies in here. The taste is gently sweet and fruity with notes of peach, honey, orange and vanilla. 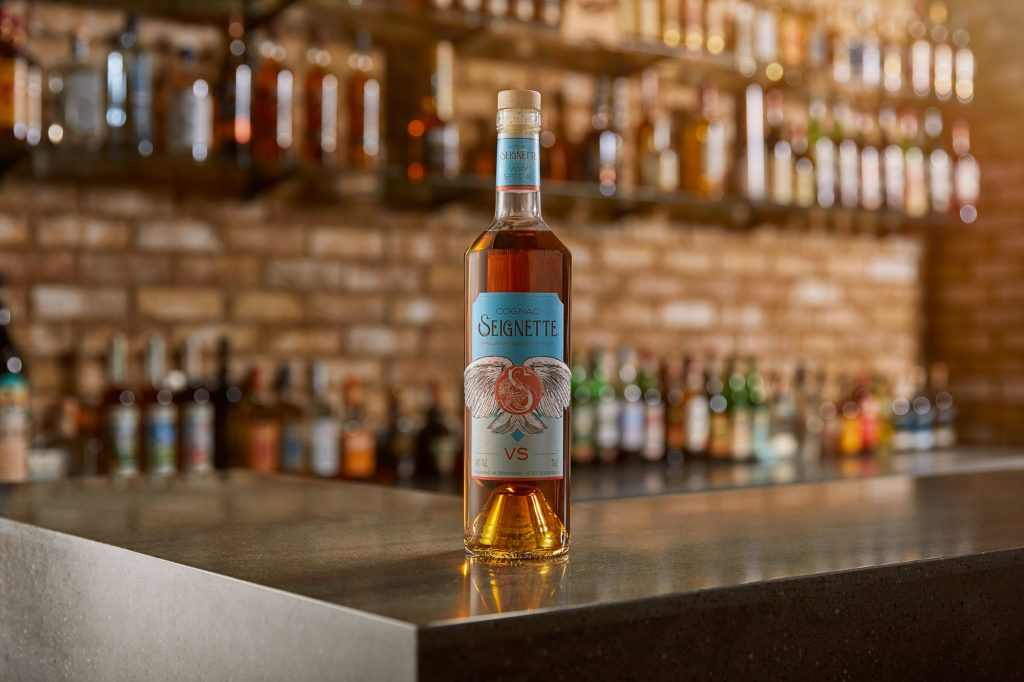 Seignette VS, looking good on the bar

Cognac has been trying in recent years to reinvent itself as a fun spirit. To get away from the balloon glasses and red noses image of the past, rather as Scotch is desperately trying to escape from the tweed and stags image that was so successful in the past. But with Cognac, this reinvention is actually a return because, as we’ve banged on before on this blog, brandy is the original cocktail ingredients. Many of the great cocktails like the Sazerac would have originally been made with Cognac. In fact, the Sazerac is named after a now-defunct brand of Cognac.

So, when the bottle of Seignette arrived, I immediately began experimenting with it. The brand suggested it in a Swan’s Neck, a take on the Horse’s Neck, a drink with ginger ale, which was very nice. But the drink I kept on coming back to was the Brandy and Soda. The fruitiness of Seignette really suits a splash of soda water plus some orange bitters to further bring out the fruity notes. For that perfect Jeeves and Wooster taste, the soda water should be served out of a syphon. More refreshing than a Whisky & Soda, less sweet than a G&T, it’s the perfect aperitif. Perhaps my grandfather was right after all.

In an ice-filled tumbler or Highball glass add the Cognac and bitters. Give it a stir, top up with soda, stir gently and garnish with a piece of orange.

Master of Malt @MasterOfMalt
11 hours ago
For #WorldWhiskyDay, we’re shaking up a cocktail called the Silent Third. Think of it like a Sidecar that swaps Cognac for Scotch.