Cocktail of the Week: The Bicicletta

Henry Jeffreys
No Comments on Cocktail of the Week: The Bicicletta

Spritzes are two-a-penny these days, if you really want to be ahead of the cocktail peloton, then get yourself a Bicicletta.

The Bicicletta is the ultimate DIY cocktail. Fancy ingredients, you won’t need them. Exact measurements, throw that jigger away and just pour. It’s a mixture of white wine, amaro and fizzy water. Apparently the name comes from how old Italian men would wobble home on their bicycles after a few. It’s essentially a slightly less spritzy Spritz as it’s made with still wine instead of Prosecco.

The big question is, ‘which bitter thing to use?’ Now, most people will be reaching for the Aperol, and if that’s what you like then ignore the Aperol critics (honestly why do people get so upset about Aperol? That’s a subject for another blog post). Or for those who like it a bit bitterer, then Campari is the obvious choice. I actually like a mixture of half Aperol and half Campari.

There’s a whole world of amari to try but seeing as Spritzes, Biciclettas and aperitivos in general are typically Venetian, we’re going with Venice’s own Select Aperitivo. It celebrates its 100th anniversary this year. The drink was created in 1920 in the Castello district of the city at the Pilla distillery. Today, it’s made with over 30 botanicals including rhubarb and juniper berries. The flavour profile is fruitier than Campari with less bitterness but without being quite as sweet and orangey as Aperol. It’s custom made to do with all those little snacks that the Venetians do so well: green olives, cured anchovies, bruschetta, that sort of thing. 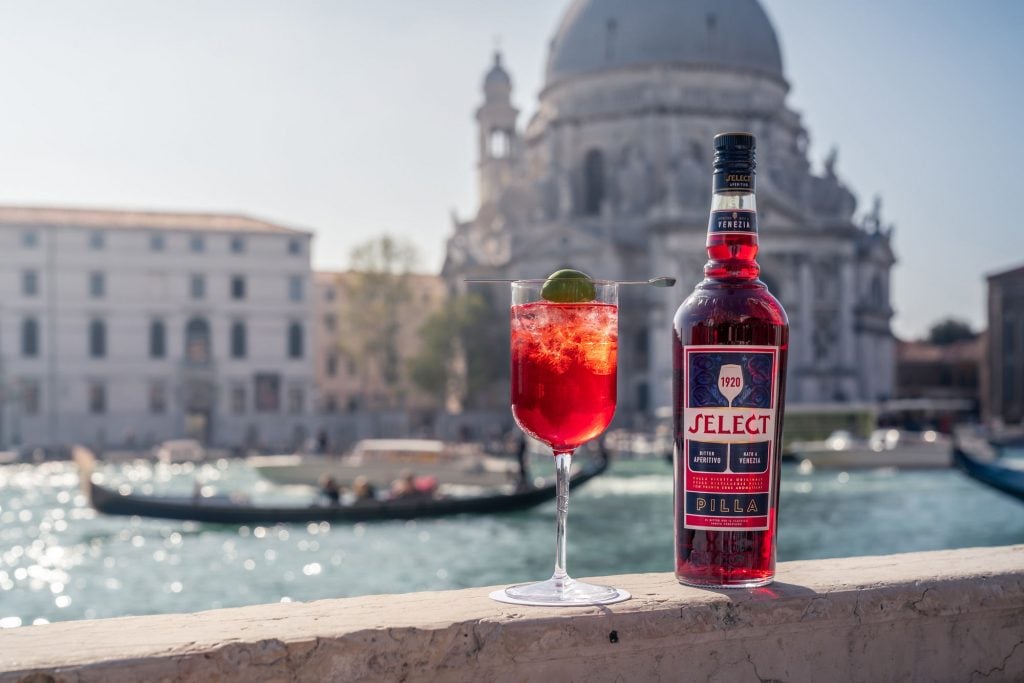 Could this be any more Venetian?

Then you have to decide what wine to use. Decisions, decisions! Well, anything goes really but you shouldn’t use something too expensive or too rich; you don’t want a great big oaky chardonnay in the middle of this. But at the same time, Select isn’t going to cover up that bottle of wine that’s been sitting on the counter for a week. A Bicicletta calls for a fairly neutral (but not completely bland) white wine of the kind that Italy does so well like Pinot Grigio, a dry Orvieto, Grillo from Sicily etc. Rosé also works a treat, either pale pink Provence or something darker and fruitier from Spain. The final thing you could do is use a light red, Spanish Garnacha or Italian Barbera to create something like an instant Sangria. Sounds a bit mad, tastes absolutely delicious.

It’s the perfect hot weather lazy day in the garden sort of drink. Just keep topping it up with soda water, Select, wine and ice, and it’ll last all day. Just be careful on your bike on the way home.

Right, here’s the recipe, if you need one:

Fill a tumbler or wine with ice. Add the first two ingredients, give it a good stir, top up with soda, stir again and garnish with an orange wheel and a green olive if you have any.