Christopher Hayman, a life in gin

Henry Jeffreys
1 Comment on Christopher Hayman, a life in gin

After 50 years in distilling, Christopher Hayman of Hayman’s Gin has just been honoured with a Lifetime Achievement Award from the Gin Guild. We caught up with him last week to talk past, present and future of gin.

The Hayman family are gin royalty. Christopher Hayman is a fourth generation distiller, great grandson of James Burrough (the founder of Beefeater Gin.) Hayman himself has been distilling since 1969 but it was only in 2004 that the name ‘Hayman’s’ appeared on a bottle of gin. Since then, the family business, both Hayman’s children, James and Miranda are involved, has gone from strength to strength. The firm moved to a new distillery in Balham in south London in 2018 and are rarely out of the gin news with its ‘call time on fake gin’ campaign and innovative products like Small Gin. To celebrate Hayman senior’s 50 years in the business, a 50% ABV Rare Cut London Dry Gin will be released shortly. Then on Friday, he was presented with a Lifetime Achievement Award from the Gin Guild. We caught up with him last week, before he knew about the honour, to discuss 50 years in gin.

Christopher Hayman next to Marjorie, the still named after his late mother

Master of Malt: In what ways has gin changed since you began distilling in 1969?

Christopher Hayman: I think one of the major changes is that back in the seventies gin was very much a lifestyle drink. Whereas today, which I’m delighted about, people actually want to understand the provenance and the authenticity of the gin you’re making, they want to know where the spirit is from, what grains are used in the spirit, where the botanicals come from, and how you make it. When I first joined the trade there were only a handful of brands where today, thanks to the recent gin craze, we’ve had hundreds of brands! But I think the main thing is the actual interest in gin and the renaissance in gin and people’s deep interest in how gin is made.

MoM: When did you start to notice a change, that people are suddenly a lot more interested than they were?

CH: I think probably in the last ten to 12 years. It’s different in different markets but in the UK it’s around that time when people started to show an interest. And I think also with bartenders, vodka had been very strong back in the 1990s and I think gin was sleepy but still there, a little bit forgotten. And people suddenly, particularly bartenders, suddenly thought ‘actually, gin is quite an interesting flavour and quality’ and started to use it. So for them, for some bartenders, it’s been a new ingredient you might say!

MoM: And do you think the boom in gin is slowing down or coming to an end? I mean it’s been predicted for a while…

CH: That’s something I’ve been asked so many times! I’ve just been to the Bar Convent Berlin and lots of people were asking that… My own feeling is that we’ve had incredibly strong growth in the last few years, at some stage or another it’s going to calm down and the rate of growth will slow down. I mean it’s very much a vibrant and thriving category at the moment but I’m sure it will calm down.

MoM: Why did you launch the ‘call time on fake gin’ campaign?

CH: As a family we’re very committed to classic gin. And I think at that time, it’s a while ago now, we were very concerned that it was losing a little bit of its identity. And as a family we take a long term view and we’re absolutely passionate that the gin category retains its sort of status, not only today but in 15, 20 years time. We were just very concerned that gin retains its respect as a category and people understand what gin is and don’t get confused by some modern gin products. 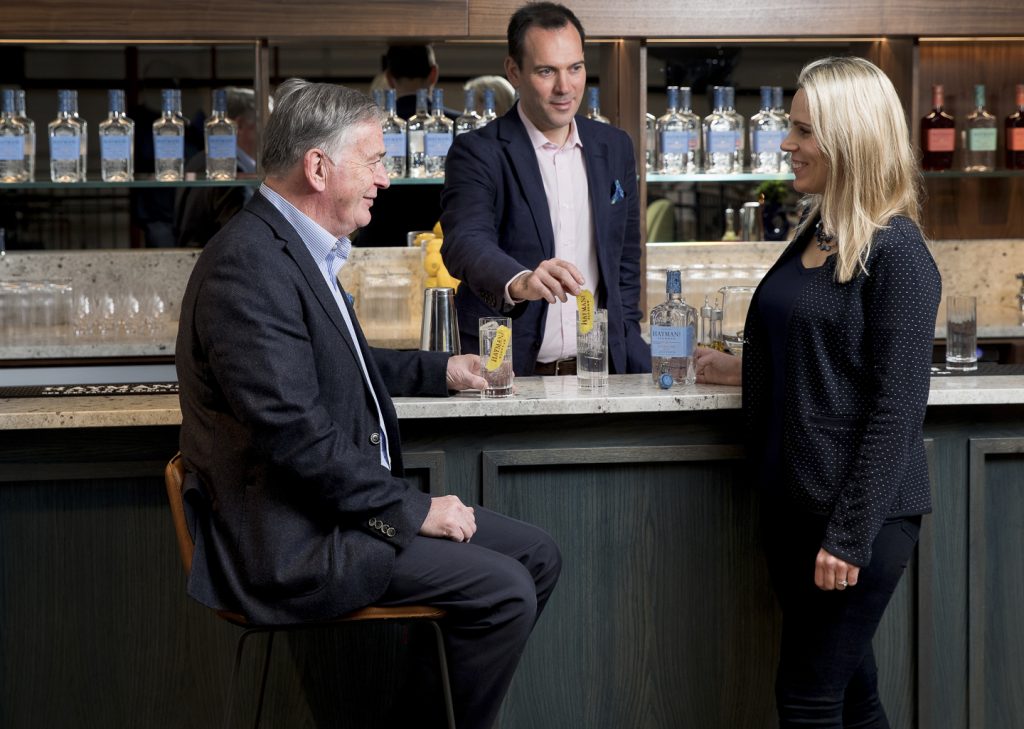 We are family: Christopher Hayman with his children, James and Miranda

MoM: Do you think the category might need more regulation or more stricter definitions?

CH: That’s a lovely question! Sadly, my own opinion is that it’s a pity that gin wasn’t properly regulated back after the Second World War. Whisky, Scotch whisky did so. I mean there are regulations in operation in the UK and the EU and different ones around the world. I would love to see stronger regulation as such. I mean it is tightening up, there’s no doubt about that, but it’s not as strong as I would like it to be.

MoM: Is it important to you to be making a London dry gin in London?

CH: Very much so. That’s where my great grandfather started and he was very much a pioneer of London dry gin and he developed a two-day process for making our London Dry Gin, which we still use today. And so to us London is the natural home of gin and that’s why we want our gin to be distilled in London. And I often say if my great grandfather walked into our distillery today he would be so pleased to see we were still using his two-day process and maybe if we gave him a sample of our gin he would say ‘hm, that’s my gin!’

MoM: Can you tell me just a little bit more about this two-day process?

CH: We only use English wheat neutral spirit, so we put that into our copper stills. We only use ten botanicals as a family and we put in our recipe, and allow it to steep overnight which allows the alcohol to start extracting some of the flavours from the various botanicals. And then after a day we do a normal distillation. We have tried doing it on the one day just for an experiment but it doesn’t produce the quality or the fuller flavour that we’re looking for in our London Dry.

MoM: And tell me about this new gin you’re doing, Hayman’s Rare Cut?

CH: Rare Cut was thought up by Miranda and James. They said ‘what can we do to celebrate dad’s 50 years in the gin trade?’ And then had a good think about it and so they came up with the idea. It was a little bit of a secret, they decided to produce a London dry, cutting it at 50% rather than at other strength, and don’t ask me how they came up with the name of ‘Rare Cut’ – I’m not sure I’m meant to be rare but 50 years is a rarity these days! I was in Canada with James a couple of weeks ago, it was one of the first times I’d tasted Rare Cut and I had it with a Rare Cut Martini, it was so good I had to have a second! 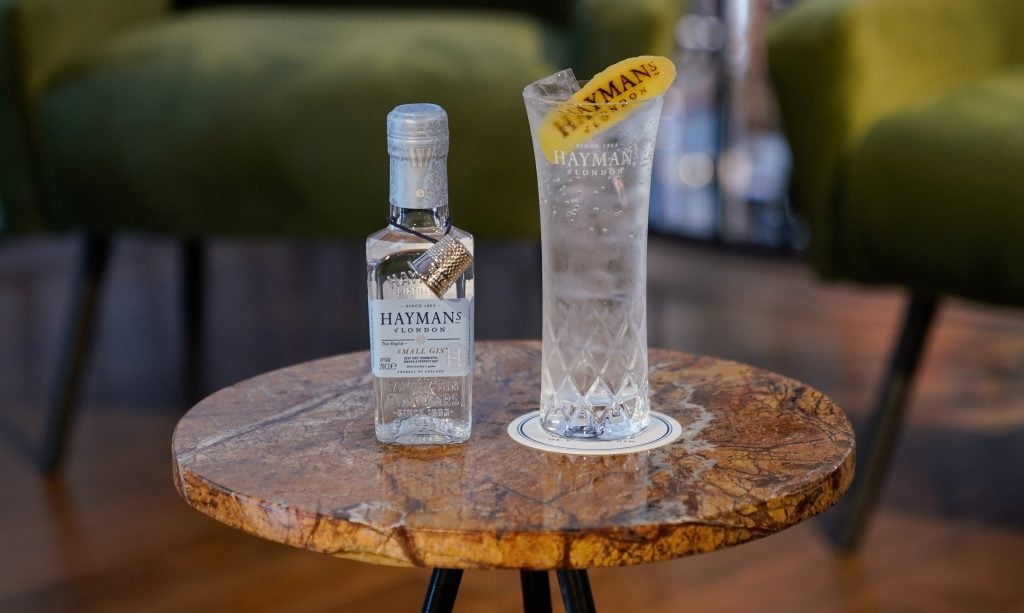 MoM: Who came up with the idea for Small Gin? I thought that was very clever.

CH: It came up through the team, quite honestly. I don’t think it was only one person. We’ve obviously been very aware of what’s going in the lower, no alcohol sector of the market and a number of people have tried to produce a no alcohol ‘spirits’. And this germ of an idea came and we developed it. So it’s had a very interesting response in the trade. Very positive. Two of three people have said to me it’s one of the most exciting innovations in the gin trade for many years – it means that you can get the taste of a full gin and tonic with 80% less alcohol and only 15 calories in the gin serve. So it’s got a huge amount of interest and once people understand how it works – and we’ve done many comparison tastings and very few people can tell the difference between a regular strength gin and tonic and a Hayman’s Small Gin and tonic.

MoM: Then finally I just wanted to ask about the new distillery in Balham. Has it become something of a tourist attraction?

CH: I think the answer is yes. We’re getting about 250 visitors a week. We do tours just about every day of the week and it’s great when you see on Trip Advisor that for London we’re number 20 and up with the Big Bens and the Buckingham Palaces of this world. Not only do we have them but we have a lot of trade visitors as well, as you can imagine. So the distillery, besides distilling all our gins, is pretty busy with business of one sort of another. And to celebrate my 50 years in the trade we had a special dinner in the distillery last Thursday evening, I had about 20 people, family, people I’ve known during the 50 years in my trade and had some lovely thank you letters and so on, so there wasn’t a better place to celebrate your 50 years in the gin trade.

Thank you Christopher, and congratulations on your Lifetime Achievement Award!