How do you create flavourful, sustainable vodka from cow’s milk? We meet the forward-thinking producers at the Black Cow Vodka distillery to find out…

This might seem almost impossible to conceive of now, but you might recall there were a couple of months in the summer and autumn of 2020 when we were allowed to venture out a bit. In September, I got the chance to head down to the rolling countryside of West Dorset to learn all about Black Cow Vodka. It was all very exciting for a couple of reasons. One, I got to go somewhere else. A place that wasn’t just the park by my flat. On a train. The other reason is that Black Cow is a brand with a story worth telling.

It’s the world’s first vodka made from milk. More specifically, using the whey leftover from cheese production (whey being the liquid remaining after milk has been curdled and strained). It’s a brilliant bit of innovation that predates the recent trends in vodka to focus on raw materials and more flavour-led products. And it’s sustainable. Whey has long been regarded as a problem child in the dairy industry. Often times it’s just fed to pigs. But Black Cow Vodka made this by-product the backbone of its spirit.

The brand’s founders are Jason Barber and Paul “Archie” Archard. The former is a fifth-generation dairy farmer, the latter is an artist who has spent time in California. They ended up becoming neighbours and good friends, where they realised they shared a love of vodka. The duo decided to bring together their farming and creative expertise after a few drinks one evening. “It all happened quite naturally. We both share a love of vodka so almost dared ourselves to give it a go. It was never about making vodka out of milk just for the sake of it; the milk had to make the vodka better. And it does,” Archard explains. 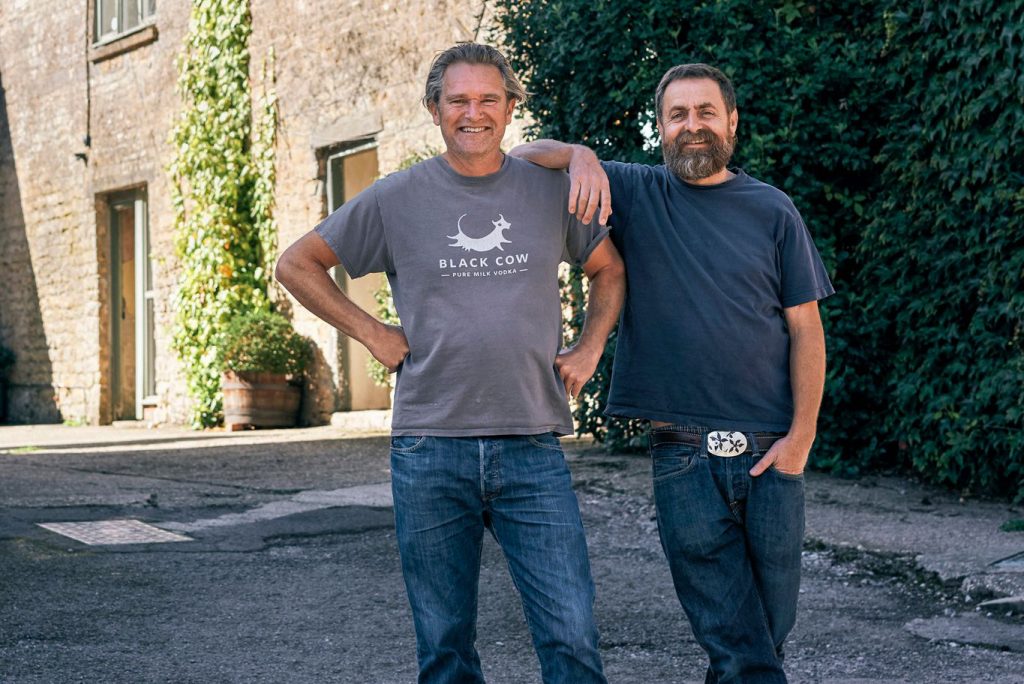 It all begins with milk

Black Cow Vodka is being made by people who know their dairy products. Barber’s family are the country’s oldest surviving cheddar makers. Their farm, which is just a mile or so up the road from the distillery, was where he headed first on our trip. If you’re on the lookout for a distillery tour now that things are picking up again, I highly recommend it. It’s a stunning area filled with great local restaurants and pubs, while Barber has endless insight into farming practices and really all things dairy. At one point he was telling me all about Araka, a beer-like drink made from fermented mare’s milk used by Genghis Khan and his armies, which was something of an inspiration for him.

The process to make Black Cow Vodka is decidedly more modern and begins with the farm’s cows, who are milked twice a day. Once the whey is obtained it’s spun to take out any excess butter, sieved out and then the leftover whey protein is used to make baby powder. What Barber really wants is the lactose, from which he can extract sugar to make the alcohol. A special form of yeast is added to create a milk beer that is then distilled in a giant copper still from German company A. G. Holstein. A fitting choice, given that the milk comes from a cross-breed of Holstein cows. It’s all designed for maximum copper contact.

Once it’s distilled, the spirit is treated with what Barber describes as “magic water”. Which comes from – you guessed it – milk. “Everything we use is milk. We don’t add water from a bubbling brook. There’s no minerality or that brittle, flinty hardness you get from other vodkas because we don’t add mineral water. It’s soft. And it makes for a great frothy head to an Espresso Martini. Anyone who’s ever washed their hair with soft water will know you get a good lather. It’s the same principle”. 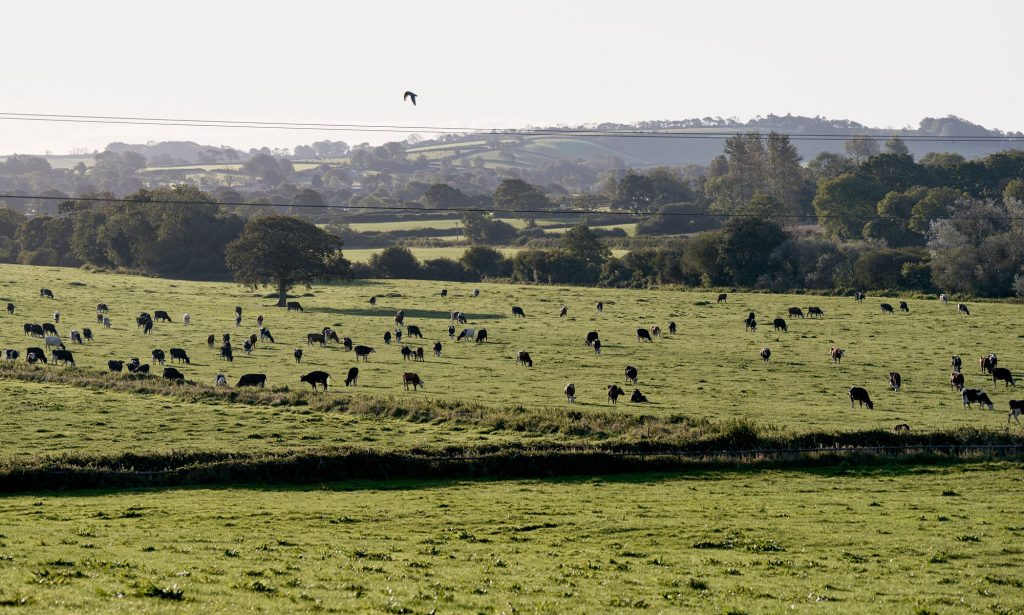 At the forefront of vodka’s flavour revolution

The vodka is triple filtered using charcoaled coconut shells and then bottled by hand with no additives or flavourings. And, with less than six parts per million of lactose, it’s actually suitable for those who are lactose intolerant because all the milk sugar has been converted into alcohol. It doesn’t say lactose-free on the bottle purely because regulations on what you can state differ from country to country.

What you may see on new bottles is a recently obtained gold medal in the International Wine and Spirits Competition. The brand has a raft of medals from award shows and has become one of the most notable vodka producers in the country. But what Barber is most proud of is how the vodka was received in Poland. “I went there and had to stand up in front of fifty bartenders and sell it. But they loved it. They said other vodkas are like counterfeit vodkas and this is a new style”.

The vodka world has come on a long way since they launched Black Cow in 2012. As we’ve discussed on this blog before, there’s an increasing appetite for spirits with terroir, brand identity or sustainability. Barber likes to think that Black Cow Vodka had a little something to do with this shift. Take a look at the brand’s commitment to the latter, for example, and you can see his point. 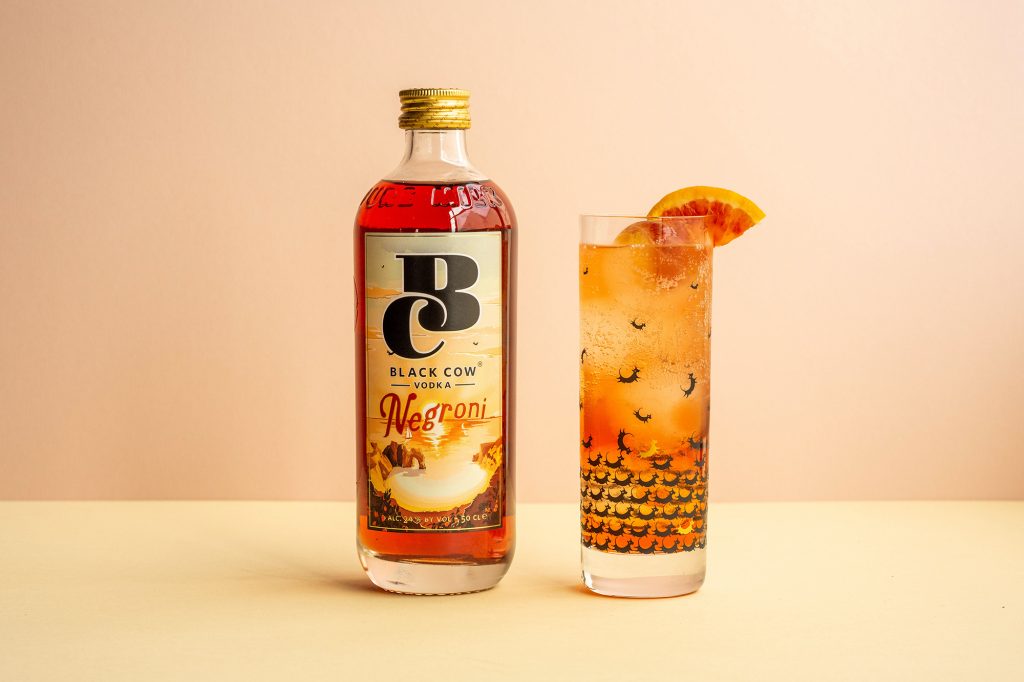 The brand’s latest release is a bottled Negroni

Black Cow’s sustainability initiatives don’t begin and end with whey. Throughout my trip, Archard and Barber make it clear how important it is to them that Black Cow is made in a way that is sensitive to the environment. The packaging is plastic-free. The bottle is produced by Yorkshire-based Allied Glass, in order to support UK businesses and lower the carbon footprint, and incorporates a metal pilfer-proof cap, which allows for the entire bottle to be recycled easily and reduces the need for a plastic security cover. Even the cheese is housed in wool offcuts.

This outlook led to Black Cow Vodka’s first line extension, English Strawberries, which was made as a means to use local strawberries deemed too wonky to make it to supermarket shelves. The fruit is pressed and then infused in Black Cow vodka over four days, which means that flavour and colour are all-natural. Nothing artificially sweet here.

This is true also of further innovations such as Christmas Spirit, which takes its inspiration from Christmas pudding and the new release, Black Cow Negroni, the brand’s first ready-to-serve cocktail. It’s a blend of vodka, Campari and Spanish vermouth, as well as a secret mix of natural bitters. It was developed during lockdown so it naturally became an expression of what Archard and Barber found themselves missing: British summertime, with a Negroni in hand, good company and a view. 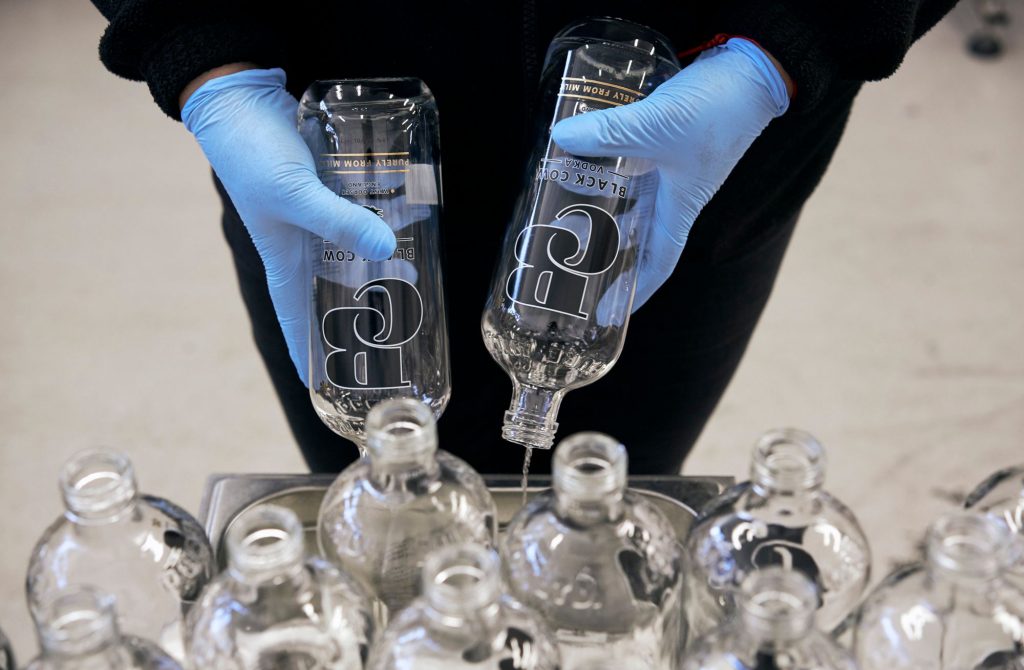 Black Cow Vodka is sustainable, innovative and tasty. That gets a thumbs up from us.

The innovation won’t stop there, however. The duo says there’s plenty of plans in place and, while they’re sworn to secrecy about any other new products, “this won’t be the last you’ll hear from us in 2021!”

While there’s lots to enjoy from the newer expressions, at its core the brand is all about vodka. But if you’re picturing a cloudy, overly creamy spirit, however, you’d be wrong. Black Cow Vodka is clean, crisp and versatile, but also full-bodied with an uncanny depth of flavour. White chocolate, floral vanilla, desiccated coconut, a little lemon mousse and white pepper spice are the predominant notes.

There’s enough character to enjoy it neat but as you expect, it makes a beautiful Espresso Martini (use the Strawberry edition for a neat little twist) as well as the kind of strong, salty and sweet Dirty Martini that I’ll go back to again and again. The most fun I had with it, however, was tasting Black Cow Vodka with Black Cow Cheese. That’s truly a match made in heaven. I mean Devon. Sorry, that was cheesy. Wait, no. Please forgive me. The vodka is definitely better than my jokes.

You can purchase the full Black Cow Vodka range from here now.