Jess Williamson
No Comments on Whiskey to return to Donegal with Ardara Distillery!

Irish whiskey (and gin) fans, we bring you good tidings. Sliabh Liag Distillers has unveiled plans for its new Ardara Distillery in Donegal – yes, Ireland looks set to get another whiskey maker!

The company has acquired the Show Field in Ardara, and will be formally submitting a planning application to Donegal County Council for the new distillery this week. This is the beginning of its ambitious plan to return whiskey distilling to Donegal for the first time in 177 years. Now that’s a long old time. Company directors James and Moira Doherty and James Keith stated that the construction of Ardara Distillery is scheduled to start later this year (subject to planning approval, of course), and if all goes to plan distilling operations will commence in 2020. Exciting stuff!

The brand already produces some familiar names, including Dúlamán Irish Maritime gin, and also The Legendary Silkie Irish whiskey. The company is also planning to create a number of new brands at the new distillery. We can expect to see a couple of peaty treats, such as Ardara and Sliabh Liag single malt and pot still whiskeys, which will remain faithful to the style of 19th century whiskeys from the county.

With a €6 million investment, Ardara Distillery will employ at least 40 people, and will have the capacity to produce 400,000 litres of pure alcohol a year. That’s the equivalent of around 1,700 filled casks, and over 1.2 million bottles of whiskey. Our mouths are already watering.

It’s not just the whiskey itself which is impressive here. The company has put a lot of thought into the design of the new Ardara Distillery building, with a particular focus on how best to complement the village and its natural surroundings. CornerStone Architecture has been called on for the task, and has designed a building that will make use of traditional shapes and materials. It will be “truly unique but will look very much part of the town”, according to Gavin Shovelin of CornerStone. 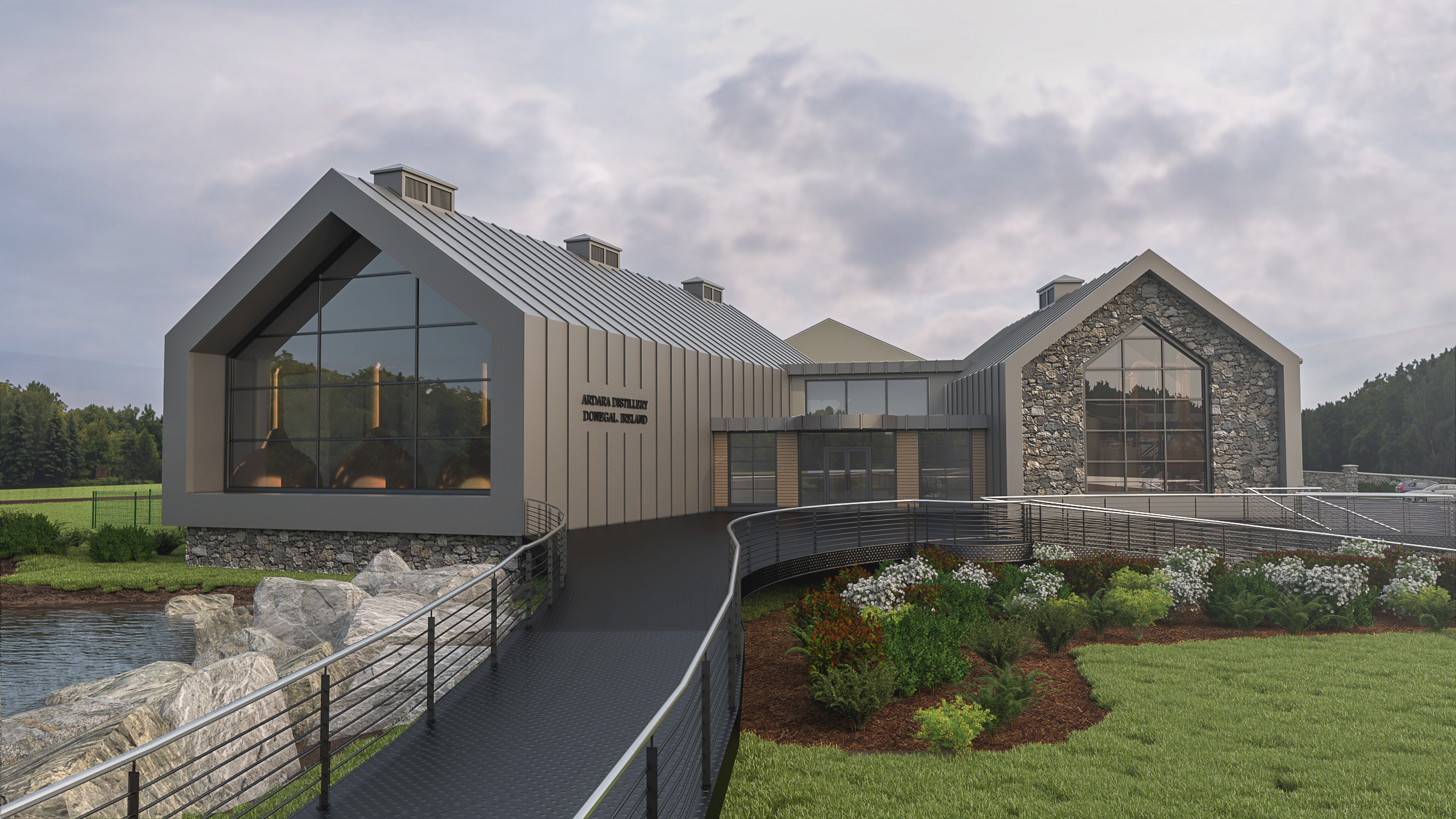 The An Dúlamán gin still, named Méabh, currently resides just outside the village of Carrick at the existing production site, and will be moved to the Ardara Distillery so whiskey and gin are both under one roof. A visitor centre has also been planned, and featuring a Poitín museum, exhibition space, tasting bar and shop. In a rather interesting but admirable move, there will be no café or restaurant, as the directors wanted to encourage visitors to make use of all that the local village has to offer.

“The design of the development is a mix of contemporary and traditional finishes which complement the village of Ardara,” said James Doherty, Sliabh Liag Distillers managing director.

“It is important to us that local businesses benefit from the foot fall, and if we can get visitors walking in the village, increasing their dwell time, then it’s so much the better for the entire community.” We wholeheartedly agree. As well as supporting the village itself, a large portion of the land surrounding the new distillery will be kept as an open green space for anyone to enjoy. Sliabh Liag Distillers clearly has huge respect for its natural surroundings and community, and it’s great to see a company so invested in preserving both.

There was a public consultation in Ardara yesterday (2 April) and the Planning Application is due to be submitted tomorrow (4 April). We’ll keep our fingers crossed!