Lucy Britner
No Comments on What do gin botanicals do?

From boosting flavours to keeping aromas in the liquid, botanicals have many jobs. And beyond the traditional line-up, the world of gin botanicals can get pretty weird, finds Lucy Britner.

‘Botanicals’: once upon a time the word was associated with fancy gardens and stuff from the Body Shop, but the gin craze has brought botanicals to everyone’s lips. Even vodka and rum have got in on the botanical boom in recent years. But what do they do in gin besides add their own flavours? Which ones are the most important? And what do distillers consider when adding new ones?

First let’s get juniper out of the way – we know by now that the berries from this evergreen conifer are essential to gin. And the rules stipulate that a gin must be predominantly juniper.

So, what else have we got? 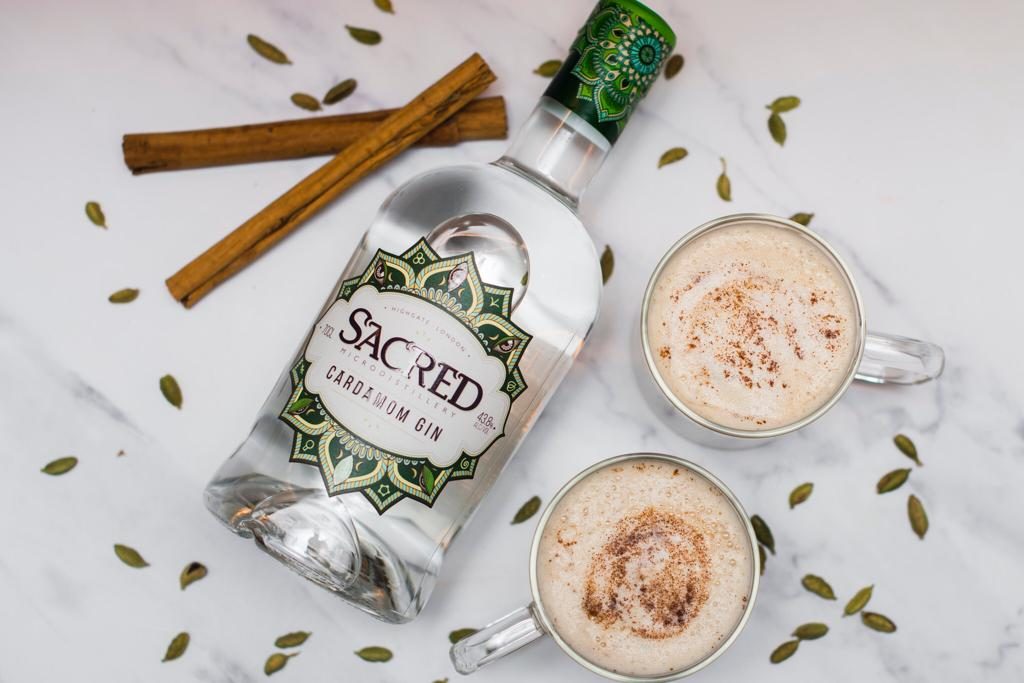 “There is only one botanical that comes close to the amount of juniper required in a recipe and that’s coriander,” says Tom Nichol, master distiller at Harrogate Tipple and former Tanqueray maker, with over 40 years of experience making gin. “I personally use coriander from areas around Russia, Romania, Bulgaria, Albania – you get the gist. Spanish and Moroccan coriander is about twice the size but half the flavour.”

Indeed, Nichol describes coriander and juniper as a “perfect marriage”.

“But as with any marriage, you need a mediator to fix and help them stay together,” he says. “And that is angelica root, which really does bind them together.”

These are our fixers. Angelica – sometimes known as Holy Ghost or wild celery, is cultivated for its sweet-smelling edible stems and roots. While orris is the name for iris germanica and iris pallida roots – and it takes about three or four years to grow a mature iris root.

“Orris root and angelica root act almost like Velcro, to keep the aroma in the liquid,” Gracie explains. “For this reason, you’ll also find them being used in the perfume industry.”

Orris is famously associated with Chanel No. 5 – a perfume that was launched back in 1921.

As well as its function as a stabiliser, Sacred’s Whitney notes that orris also has a floral character, while she says angelica “adds body and creaminess”. 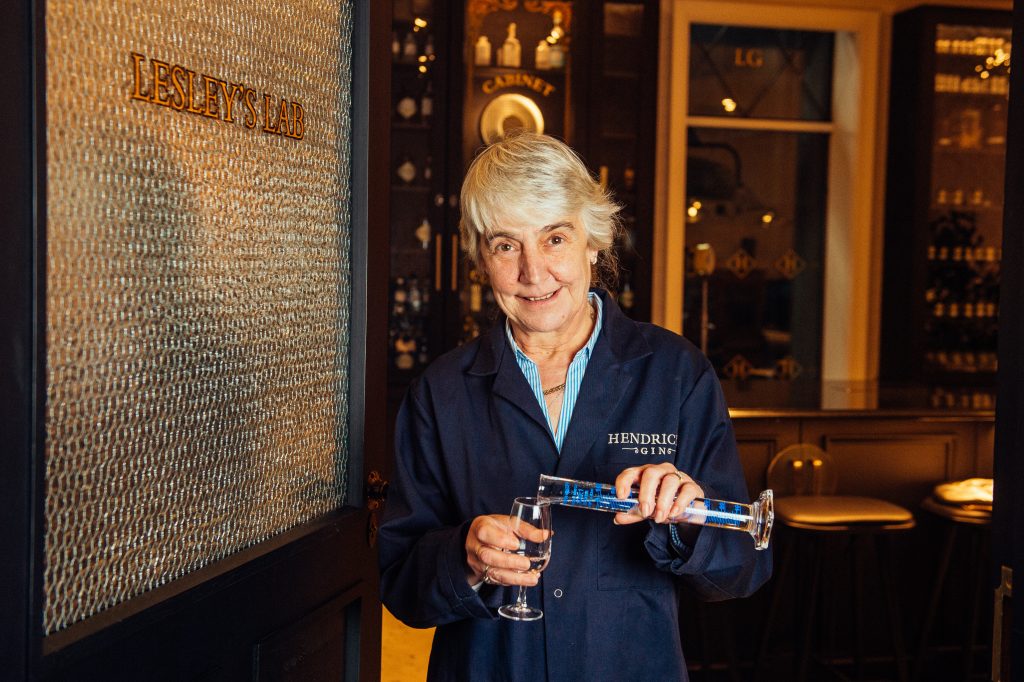 Oranges, lemons, limes, grapefruits, yuzus, bergamots… the list goes on. Of course, the origin and type of your chosen citrus plays a part in the flavour profile. And Nichol says citrus can be a tricky customer in the distillation process.

“Some botanicals can change dramatically and can be difficult to maintain consistency, such as citrus fruits – especially limes,” he says. “A slight change in the recipe volumes of these more difficult additions to your gin can balance this out.”

For Gracie, dried botanicals are the order of the day, and she says this helps to guarantee that she will get the same amounts of essential oils and flavour compounds from the botanicals every time.

“Whereas if you pick them from the plant, you’re looking at 90% of the fresh material is water, so you lose 90% of the weight of your botanicals before you start,” she says.

But in Highgate, fresh citrus is on the chopping board, largely because of the type of distillation used to make Sacred Gin.

“We use fresh citrus in our products as we prefer a true citrus flavour rather than a dry preserved version of it,” explains Whitney. “Think of the difference between fresh versus dried apricots or a fresh Bramley apple and dried apple rings. Vacuum distillation is particularly suitable for this because, as distillation occurs at a very low temperature it retains the freshness of the citrus extremely successfully – a good example of this is the difference between fresh-cut citrus and marmalade.” 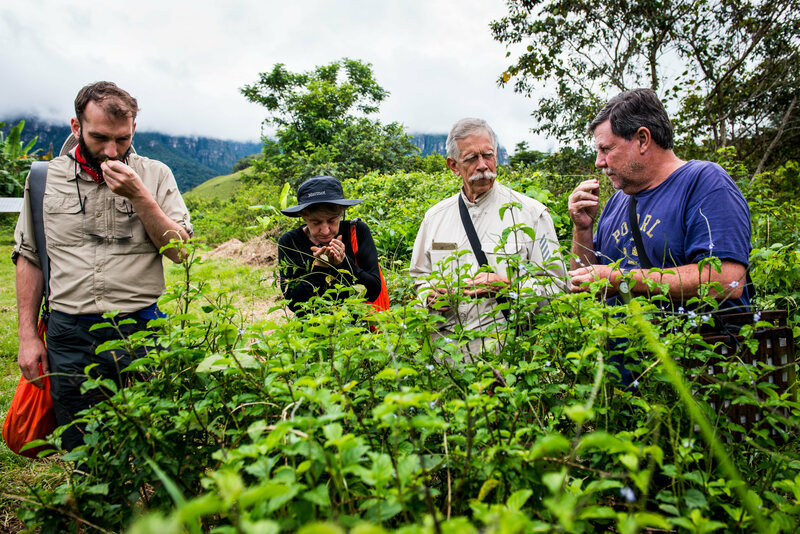 Lesley Gracie in sniffing out new botanicals in Venezuela

Away from the famous four of juniper, coriander, orris and/or angelic root and citrus, distillers have been putting just about anything in their gins. And a burgeoning gin market means they will go to great lengths to find something new and interesting.

Gracie, for example, travelled to Venezuela back in 2013 with an “Indiana Jones character” to sample fruits and plants that might be good for a gin. “We stayed with a tribe that had only been non-nomadic for about three generations. They looked at us as though we were completely mad! Anyway, some of the plants that were growing there, I had never seen before. So, we were looking at different fruits and plants, rubbing them, smelling them. Some were amazing and some were horrific.”

This is the point where Gracie tells us about the Hendrick’s limited edition that (thankfully) never was. “There was one plant the tribe called ‘wild pig’s piss’. Our global brand ambassador came scurrying in saying ‘we’ve got to use this – imagine the label: Hendrick’s with wild pig’s piss’!”

After rubbing the plant in her hand, Gracie says she had a pretty good understanding of where the name came from. Pig’s piss aside, the master distiller did find scorpion tail – a plant with a flower that curls over like a scorpion tail. “I pulled some leaves and flowers off that, and it had the green, the floral and the spice element that we build into Hendrick’s.”

She says maintaining the botanical profile of the brand was important – no matter how whacky the new addition. “I did an extract and most of the elements were still there, which is quite unusual. I did a distillation with my baby still – in the jungle, in the hut where we ate and slept – which was quite amusing. Those three elements were still in the distillate.”

And so, Gracie made nine litres of the distillate and shipped it back to the UK to make a small batch of Hendrick’s with Scorpion Tail to release at special events for friends of the brand.

The trip ended up being an inspiration for the relatively new Hendrick’s distillery and its two innovation green houses. One is set to the Mediterranean climate and the other to a tropical climate. Gracie can experiment with different botanicals so that she can source them on a commercial scale, if they turn out to be any good.

I bet she’s not growing any wild pig’s piss, though.

Master of Malt @MasterOfMalt
6 hours ago
. @RosebankWhisky Distillery launches 31-year-old whisky, the last ‘old Rosebank’ release before the distillery is reopened to the public next year.

Master of Malt @MasterOfMalt
7 hours ago
On The Nightcap this week: @johnniewalker_ gives away 270,000 drinks, @RosebankWhisky launches its last old release before the distillery reopens, and the cheapest pint in the UK is revealed.

Master of Malt @MasterOfMalt
12 hours ago
Showcasing some rather unusual African botanicals, it's Elephant Gin! Ever wanted to taste baobab, the Buchu plant, Devil's Claw and African wormwood? This is the tipple for you!