What are worm tubs and why do they matter?

Lucy Britner
No Comments on What are worm tubs and why do they matter?

Today, Lucy Britner takes a dive into one of the more geeky aspects of whisky production, worm tubs, and asks what effect these traditional condensers have on the finished spirit.

Anyone who enjoys visiting distilleries will likely remember their first worm tub. Mine was at Talisker on a freezing cold March morning. As I stood outside, looking at the large wooden tubs filled with steaming water and coiled copper worms, part of me wondered what on earth they were for. But most of me wanted to jump in and warm up (obviously I didn’t do that). For a few reasons, worm tubs are a relatively rare sight. But for those that have them, they represent a vital part of a distillery’s character… 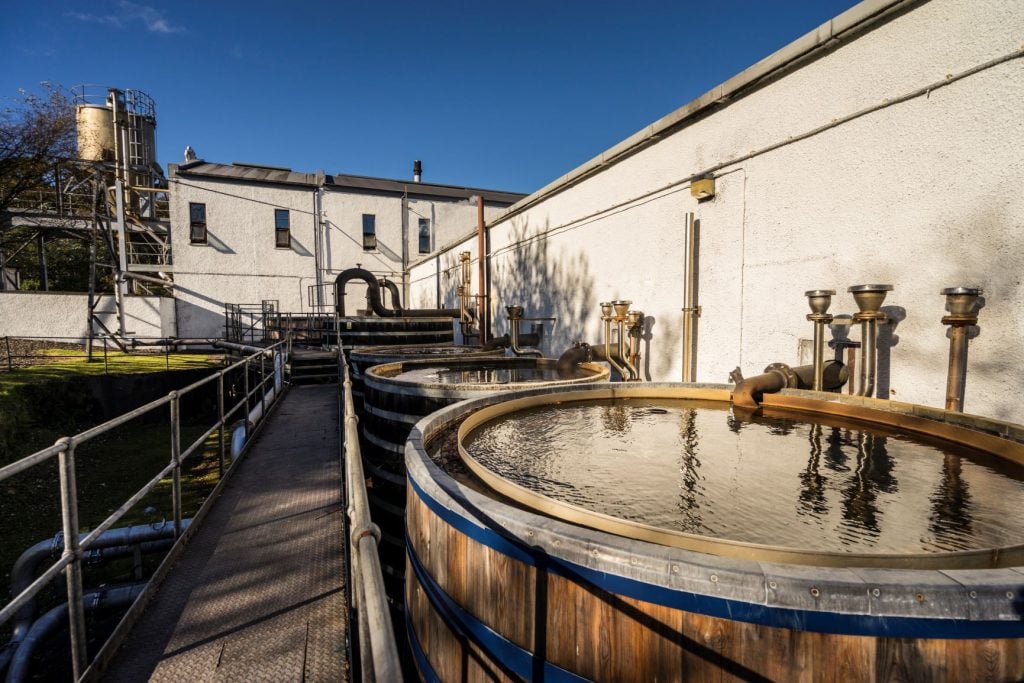 Fancy a dip? The worm tubs at Talisker

In short, worm tubs are a type of condenser. They are a traditional way of turning spirit vapour back into liquid and they work like this: The lyne arm at the top of the still is connected to a long, coiled copper pipe (worm) that sits in a huge vat of cold water (tub), which is usually outside. As the vapour travels down the worm, it condenses back into liquid form.

There are only a handful of distilleries that still use this method to condense their spirits, with most now preferring the more modern and efficient ‘shell and tube’ approach.

The general assumption is that because the cold water in a worm tub causes the vapour to condense fairly rapidly, there isn’t as much copper contact, generally making for a heavier style of spirit. But, like with all things whisky, this is only one part of the process and there are many factors that combine in each distillery to influence the style of a spirit.

“Some believe that worm tubs tend to create heavy spirits, but that’s not necessarily true as they are capable of producing lighter characteristics depending on how they are used – it’s a fine balance,” explains Jackie Robertson, site operations manager at Talisker on the Isle of Skye. “At Talisker, we are passing a lot of cold water through the tub, condensing the vapour quite quickly to reduce the copper contact, so you’re going from the vapour phase to the liquid phase. If you retain warm water in your worm tub, you can slow down that condensing process and allow much more of a copper conversation with the vapour.”

Enter relative newcomer Ballindalloch, which started making whisky in 2014 and uses slightly warmer tubs to create a lighter style. Distillery manager Colin Poppy explains that the distillery was built inside an 1820s listed building, so the design had to fit the site. “There was no room inside for shell and tube condensers,” he explains. “We could’ve put them outside but we decided early on that we wanted to be traditional, so we decided on worm tubs.”

Ballindalloch’s tubs are about 10,000 litres each and the copper worms are about 70 metres long. “The most common statement I get from guests is ‘how come your spirit is light and fruity when you use worm tubs?’.” Poppy explains that at Ballindalloch, the worm tubs operate using a closed loop system that recycles the water. This means it is never quite as cold as other worm tubs, where water is often drawn from a river.

He says this allows the vapour more copper contact in the worms before condensing. Not only that, the distillery carries out a very slow distillation, which also means lots of copper contact. 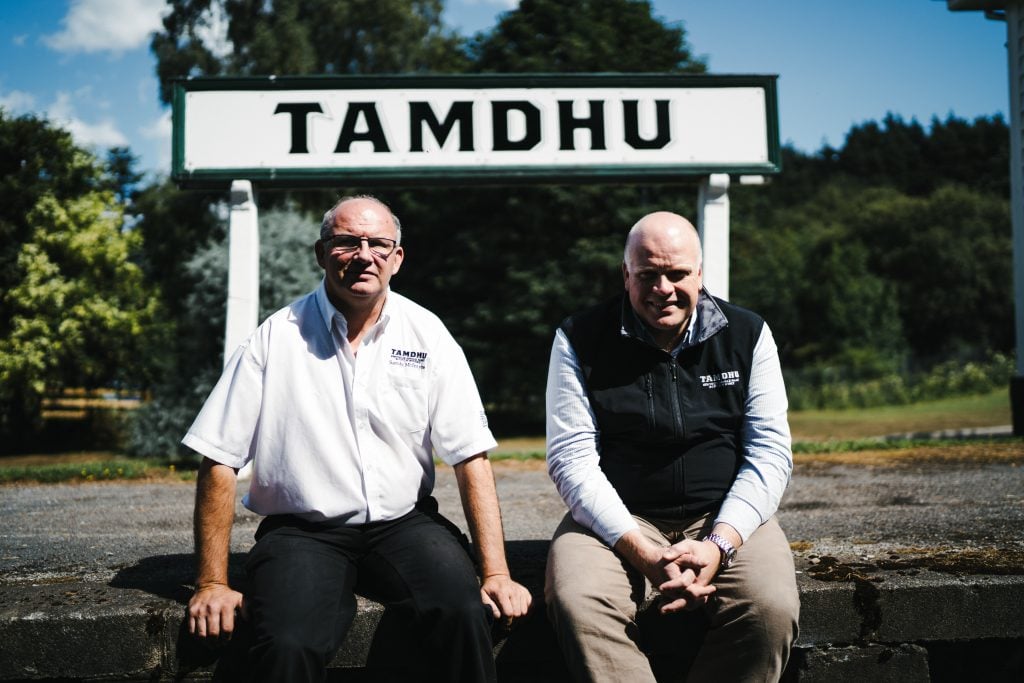 Like Ballindalloch’s desire to adhere to traditions, the soon-to-be reawakened Rosebank distillery in Falkirk will feature new worm tubs that mirror the original production style alongside the same still designs.

Dundas also points out that the role of condensers must be looked at in relation to the whole distillation process and “what the spirit is like before it passes through”. He continued: “How that manifests itself during maturation is key and in Rosebank, I always get a light floral style, as it is a whisky predominantly matured in refill – but a little weight in the palate.”

From the Lowlands to the height of the Highlands and the Pulteney distillery has been using worm tubs since 1826. Distillery manager Malcom Waring says that “using worms in our process at Pulteney allows us to have a long, slow spirit run, with the spirit vapour picking up the bolder, beefier characteristics in the first part of its journey in the worm. Once in the cask, these develop into notes of butterscotch, vanilla and coconut, giving Old Pulteney the distinctive taste and character we’re looking for in the finished whisky”.

The overall structure and design of the worm tubs used at Pulteney today are the same as the originals. “We tend to replace sections of the worm tub when needed, so some bits of the current equipment are older than others,” he explains. “They were installed as you see them today when Pulteney was refurbished in the 1920s and six original stills were replaced with two.” 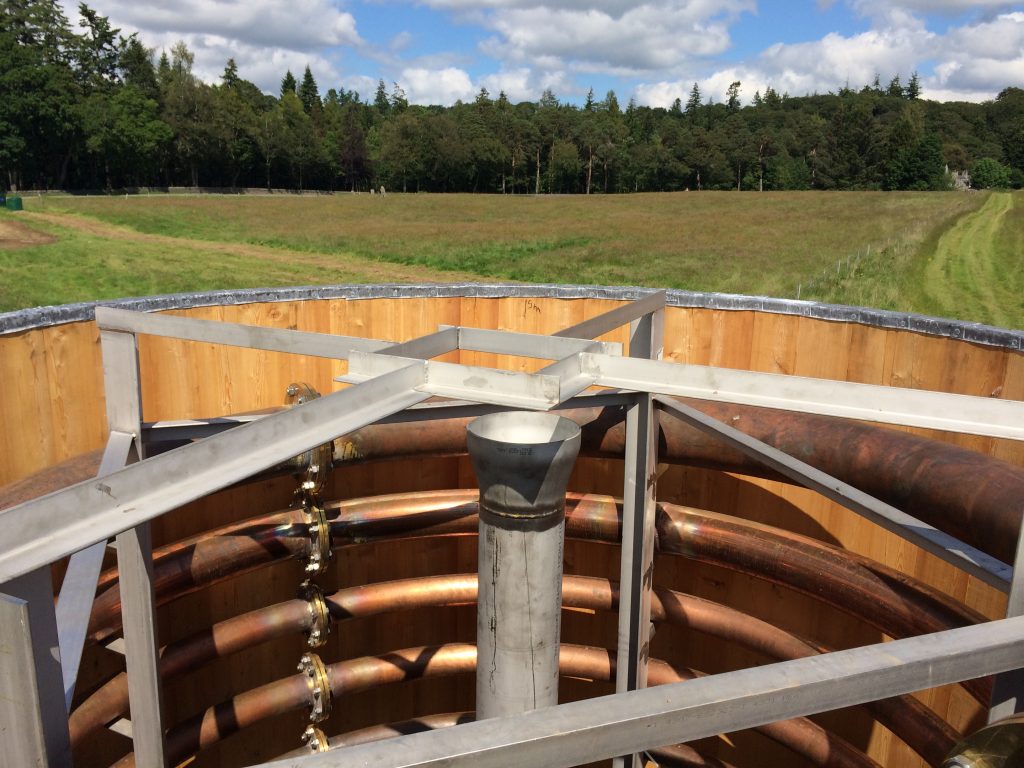 Why aren’t they everywhere?

In theory – and indeed in the glass – worm tubs seem great. So why don’t more distilleries have them? In short, they have been substituted for a more efficient condensing method.

Distillery equipment company Forsyths says they have largely been replaced by shell and tube condensers because shell and tube offers a “more compact design and are easier to repair and replace”.

Indeed Pulteney’s Waring says it takes more effort to use and maintain worm tubs. “There’s a lot of copper, so they wear out more quickly, plus the equipment needs quite a lot of space and water,” he says. “But I think it’s worth it for the qualities they bring to our whisky. We are one of only a handful of distilleries still using worm tubs, and unlike many others, there has never been any pressure for us to change our production process. I see this as a huge advantage, allowing us to make Old Pulteney using the traditional equipment in the way it has always been made here in Wick.”

And as more distilleries are revived or built with certain traditions in mind, it will be interesting to see if the worm tub will become a more popular fixture.

Master of Malt @MasterOfMalt
6 hours ago
Take a load off and enjoy a drink somebody else whipped up for you. These are our top recommendations for pre-bottled cocktails.