Master of Malt
1 Comment on The Rosebank revival begins

Yesterday was an important day in Scotch whisky history as work officially began on rebuilding legendary ghost distillery Rosebank by owners Ian Macleod distillers. We have the full story.

The last time the spirit flowed at Rosebank was back in 1993. Once known as the King of the Lowlands, the distillery was mothballed by owners UDV (forerunner of Diageo) and the maltings were converted into a Beefeater restaurant. Now, new owners Ian Macleod Distillers have officially begun work on bringing this ghost distillery back to life.

The firm acquired the brand and all the remaining stock in 2017, and obtained planning permission to rebuild in January of this year. It’s not just a question of refurbishing the old distillery as there’s very little left to work with; most of the equipment including the stills and the mash tun was stolen in 2008. In order to recreate the style of the original, there will be three stills for triple distillation and worm-tub condensers. These will be housed in a modern glass-fronted building with a visitor centre, tasting room, shop and warehouse (see artist’s impression in header). Located in Falkirk between Edinburgh and Glasgow, Rosebank likely to be a major tourist attraction with 50,000 visitors a year expected. Among all the modernity, it’s good to hear that the famous 108 foot chimney will be preserved. 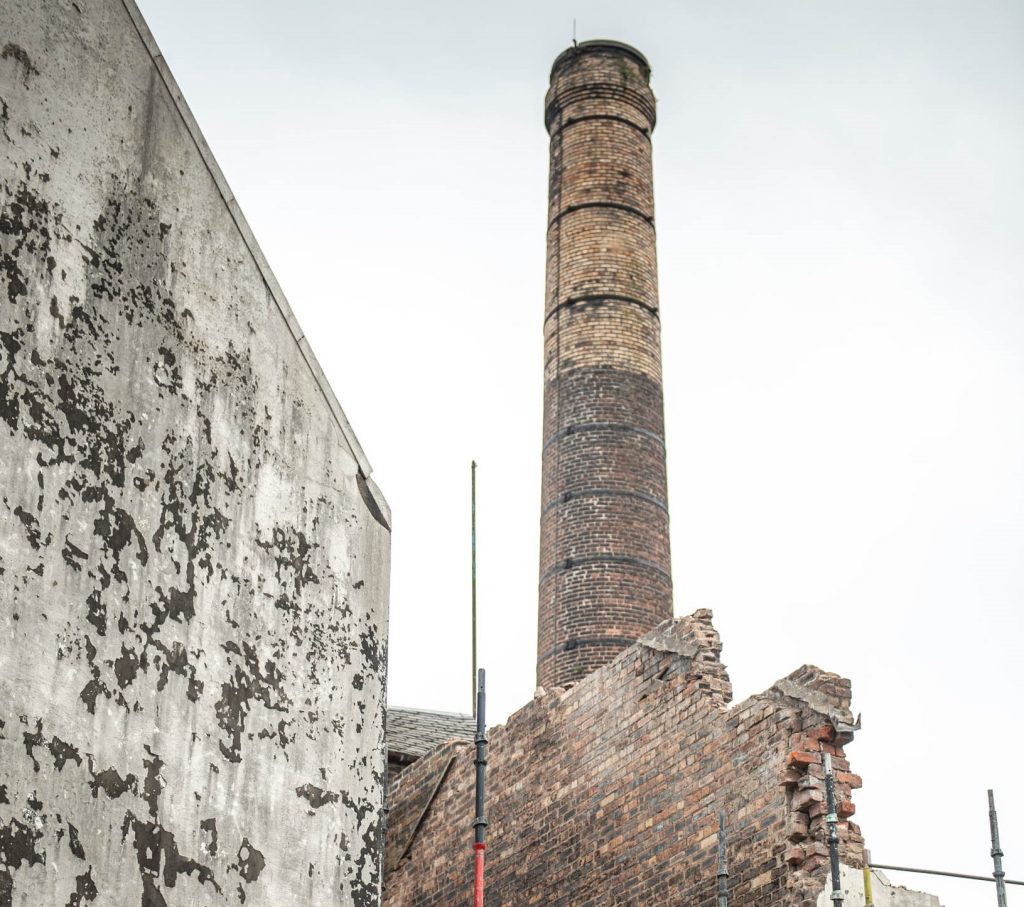 The famous chimney at Rosebank

Mike Younger, finance director of Ian Macleod Distillers, commented: “This ground-break is an iconic milestone, it marks the start of a new and exciting chapter for both Rosebank and Ian Macleod Distillers. Our vision was to bring this quintessential Lowland single malt back to life and ensure it could live on for generations to come. A dream that is now very much underway. More than ever, there is a real want for a Rosebank revival. It has now become somewhat of a collectors’ item, with bottles of 12 Year Old selling at auction for £350 plus, so there will be a lot of people excited to hear that work is officially underway. We have quite the road ahead and look forward to sharing our journey with you all.”

Work is expected to be completed by summer 2021 when the distillery will open its doors and start producing new make. Meanwhile, if you want a bottle of Rosebank our friends at That Boutique-y Whisky Company have a couple of bottlings (here and here) you might be interested in. Sadly, they are not cheap.

Get acquainted with genever, the grandfather of gin