Where you age spirits can make a huge difference to the finished product. To learn more, we spent a morning with Eric Forget from Hine, trying vintage Cognacs, some matured in the warmth of France, others in cold grey England. Yeah, it’s a tough life.

The results are in from the Bureau National Interprofessionnel du Cognac (BNIC): while global Cognac sales are doing very nicely thank you, the shocking news is that Europeans and, more particularly, the British just aren’t drinking enough of the stuff. What are you playing at? It wasn’t always this way, Cognac as we know it was largely created for the British market, often by British and Irish merchants. Perhaps the most British of all the Cognac houses is Hine, which was founded in the 18th century by a Dorset lad called Thomas Hine.

Until recently, a descendant, Bernard Hine, was still involved with the company (now part of French drinks group EDV SAS) but he has stepped down due to ill health.  Hine still specialises in a peculiarly British style of Cognac called early-landed. This dates back to when brandy was shipped in cask to Bristol and connoisseurs noticed how it aged differently to the French-matured product. Hine now matures these special Cognacs at Glenfarclas in Scotland (in its most humid warehouse) which then have to be shipped back to France for bottling (damned bureaucracy). Earlier this year, we were fortunate enough to meet with Eric Forget, cellarmaster at the company since 1999, for a comparative tasting of Bristol-aged versus Jarnac-aged Cognacs, as well as the core range. 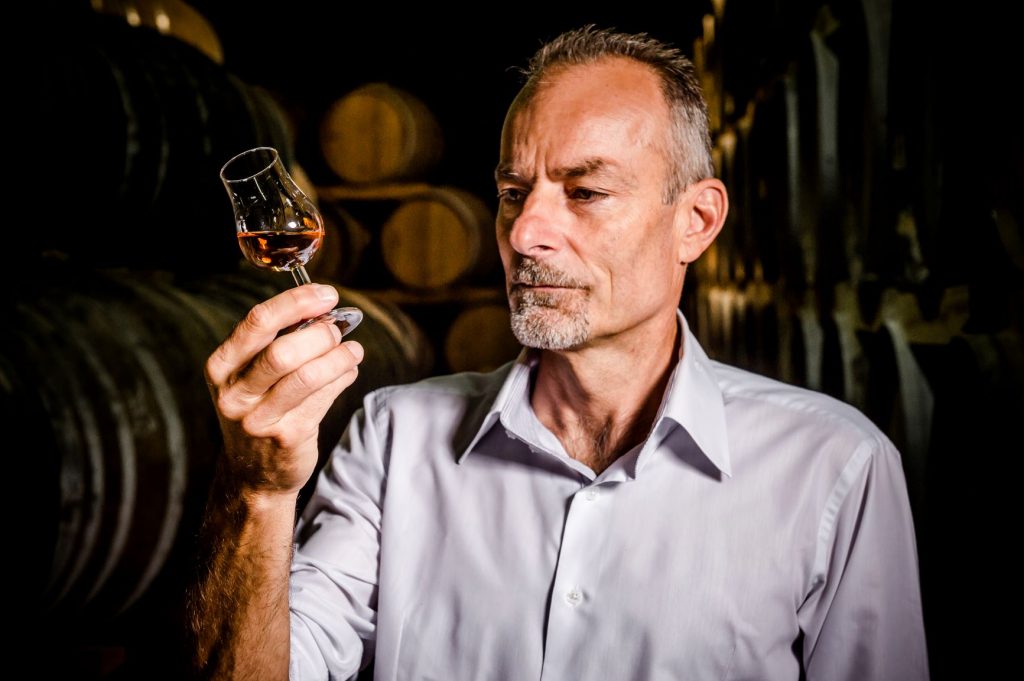 Hine is famous for its pale, elegant style. Forget explained the philosophy: “everything is finesse, delicacy and fruitiness, no harshness or bitterness.” There’s a lot less wood influence, to achieve this, he doesn’t use Limousin oak which he thinks has aggressive tannins, “we use Normandy, Limoges or Paris oak, northern oak trees have a finer grain and less tannin.”

Forget doesn’t want the wood to mask the fruit: “We want to keep terroir, floral flavours, and maintain balance for all products.” The fruit comes only from the Champagne region. Hine owns 120 hectares in Grande Champagne, “we are vine growers. We also purchase from other growers and distillers, the same people every year,” Forget told us. The company never buys in aged Cognac. Hine distills on the lees: “lees means you can age for a long time, they give it body,” he explained.

99% of grapes in Hine Cognacs are Ugni Blanc. Forget is sceptical about other grape varieties: “the rest forget it, very susceptible to rot”. But he’s not averse to experimentation. New crosses with some American genes are being developed which have some of the character of Folle Blanche (one of the old pre-phylloxera Cognac grapes) but with more resistance.  According to Forget: “we might see something in seven to eight years. Cognac changes in time, if well-managed, why not? We are not conservative. There are lots of young people in industry. I am the only old person at Hine.” 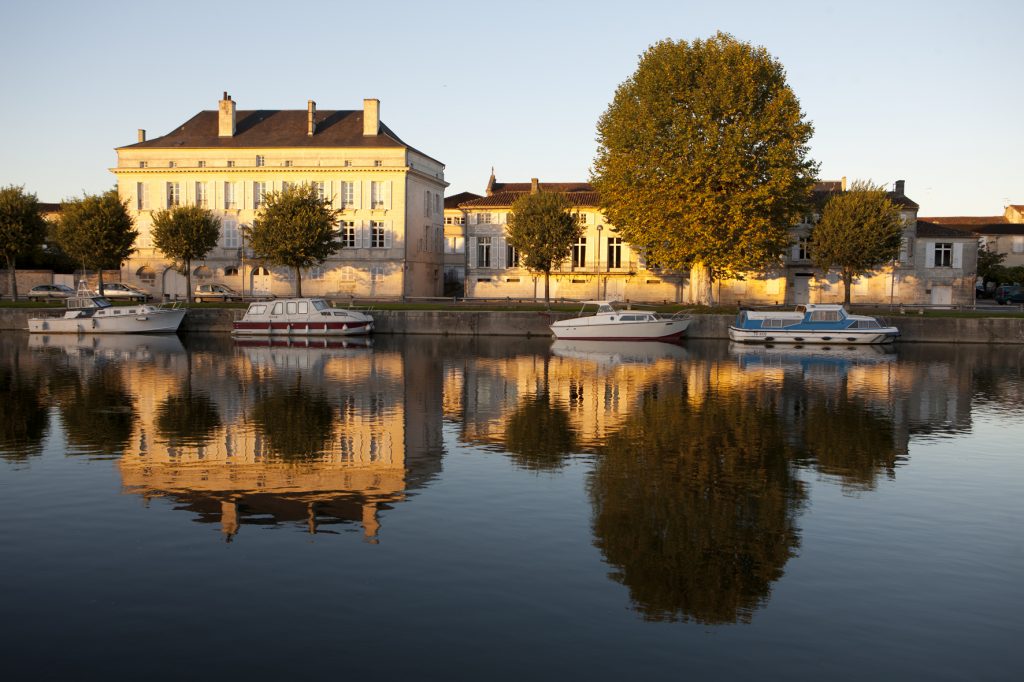 Perhaps to butter us up a little, he praised the British taste in Cognac, where delicacy is prized. He was less complimentary about the American and Chinese markets: “They believe dark Cognac is better, big mistake!” Hine produces a brandy called Homage to Thomas Hine ; named after the company’s founder, it’s a tribute to the lighter style that was popular in 18th and 19th century Britain. “VSOPs are meant to be pale, 200 years ago Cognac was paler,” Forget told us. Homage is a blend of early-landed Cognac, “to give it finesse” and other lighter brandies.

Homage is a blend, but Hine’s speciality is its vintage products. “Vintages are easy, just select the best and there’s nothing to do”, Forget joked. The differences between the Jarnac-aged brandies and the Bristol-aged products is marked; in 1984 Forget was pleased with the early-landed but “the Jarnac-aged one was not so good, so I blended it.” He gave us the 1983s to taste, the French one was peachy and floral whereas the English one was angular with flavours of gooseberries and English hedgerow flowers.

In 2015 Hine launched a completely new product called Bonneuil, which not only came from a single vintage, but a single vineyard in Grand Champagne. Such a thing was almost unheard of in Cognac. The idea was to sell it with less age so that it expresses the terroir more than the effects of ageing. The first vintage was the 2005, we tried the deliciously fruity 2008. In it’s delicacy and fragrance, Bonneuil might be the quintessential Hine product. 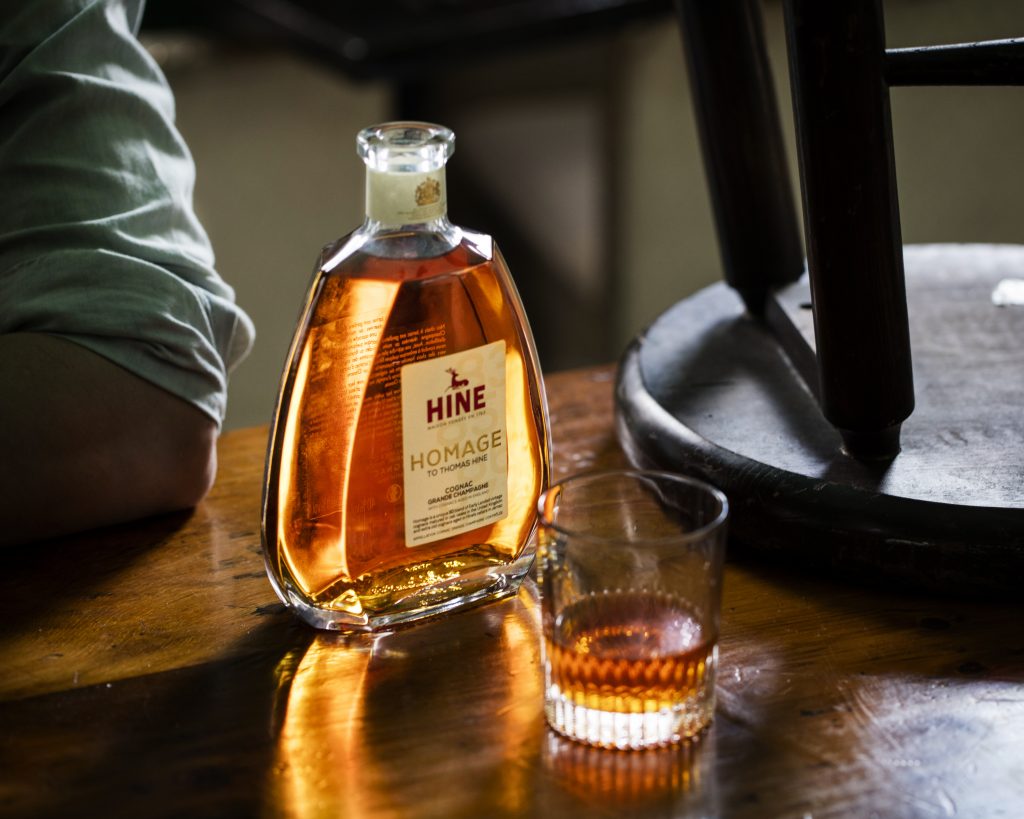 The company doesn’t produce vintages every year, only in special years, “like d’Yquem” said Forget, referring to the legendary Sauternes château. He decides after five years whether the brandy is good enough for vintage, “otherwise we blend it,” he said. As part of the commitment to delicacy, vintages are only kept in wood for around 20 years before being transferred to glass demi-johns. And Hine use zero boise in any products and no caramel in the vintage or Homage.

Forget talked us through the range with a twinkle in his eye and an honesty rare in the often over-hyped world of booze. He’s not averse to criticising Hine’s own products: he wasn’t so keen on the opulent 1975 we tried, the vintage was too high in sugar apparently and the style is not typically Hine (I rather liked it). The early-landed 1975 in contrast is lean and citric. He’s also candid about the trend for vintage Scotch whisky: “vintages for Scotch are just marketing. It’s nonsense.”

Hine’s number one market is now China but, according to Forget, “China is very difficult because they keep changing the rules.” This is followed by America, Russia and then the UK. Mainland Europe isn’t doing so well. Compared with whisky, demand for rare Cognacs isn’t so strong. This comparative lack of interest, however, means that beyond a few bling-tastic bottlings, Cognac is seriously undervalued. So it might be time to have a look, or don’t because it means there’s more for us.

New Arrival of  the Week: The English – Triple Distilled