New York bars have a reputation for greatness. We spent some time sipping our way through the city, and behold! Here are our findings. We present 10 great bars to check out on your next trip!

Eating, and in this context, drinking, your way around a city can be the best way to get a feel for the heart and soul of a place. And if that place is New York, your palate is in for an absolute treat. We had a few days in the city in between visiting distilleries and taking part in the American Distilling Institute’s annual Judging of Craft Spirits (we know it’s on the west coast, but we made it happen). The best way to kill time? Sampling some of the world’s best bars, which just so happened to be on our doorstep.

We stayed part of the trip in Midtown, making a good few of these names in walking distance (it was a little bit of a stretch on occasion). We then hightailed it over to Greenpoint, taking in two delightful Brooklyn drinking holes en route.

Full disclosure: New York has hundreds of bars on offer, and a chunk of those have become internationally renowned for creative menus, ace hospitality, and simply put, damn good drinks. We could have stayed in the city for a year and not hit them all up. So we narrowed it down to 10 that we loved for various different reasons.

We know there are LOADS of other excellent bars in NYC. Have you visited? Which were your favourites? Any bars on your New York bucket list we should know about? Let us know in the comments below, or on social! 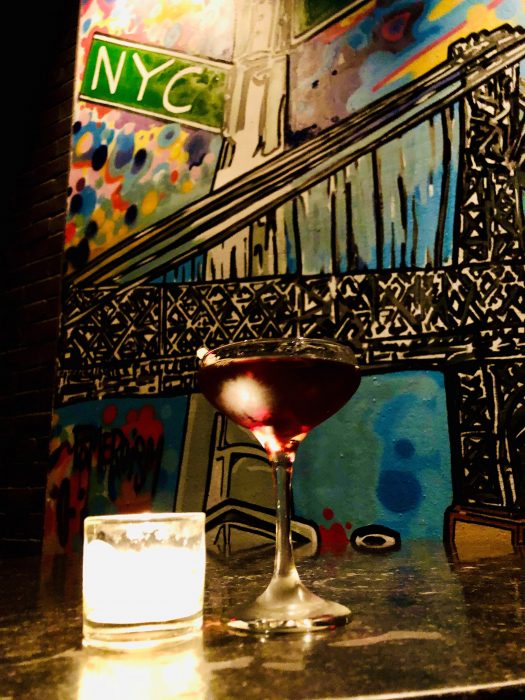 A relatively recent addition to the New York scene, this cosy ground-floor Midtown lounge-style haunt is seductively lit and swathed in murals by Fumero, an international graffiti artist inspired by the city’s subway art. The 360-degree bar is the focal point, and we recommend grabbing one of the 12 seats there to chat to the wonderfully engaging bar team (don’t panic if it’s full, there’s loads of table space, too!). The current menu is based around the classics, and can be tricky to navigate if you’re not up to speed on cocktail families. But don’t panic – folks are on-hand to help. We went for a Classic Manhattan (it was our first drink in actual Manhattan; it needed to be done) and it was a fabulously balanced, delightfully robust serve. 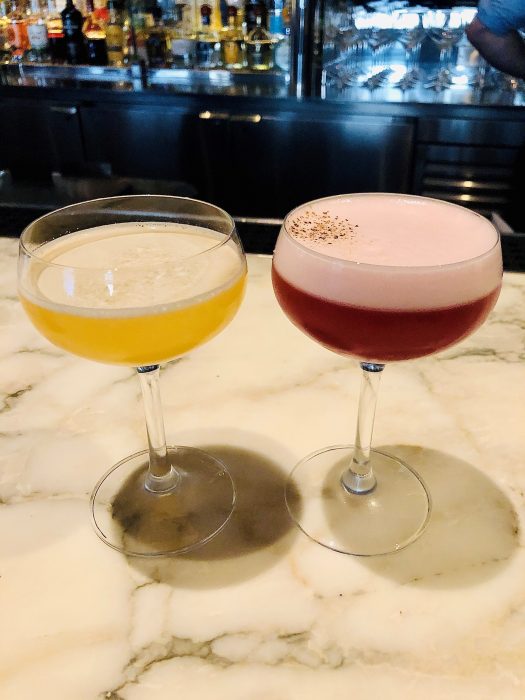 The Private Eye (L) and Dusk Till Dawn

Whether you’re arted out and in need of refreshment, or just in the area and fancy something literally very fancy, Michelin-starred The Modern, located at The Museum of Modern Art, is a dreamy spot to stop and sip. (And eat. We really recommend the carrot rillettes on the Bar Room menu.) Sit at the bar and you’ll be in good hands; the service is impeccable, and the vibe is actually pretty lively during the afternoon. We tried (and adored) the Dusk Till Dawn, made with pisco and genever, a twist on the Sour that really works, and the Private Eye, a boozy number made with baijiu, rum, cachaça, pineapple and chilli. It’s one of the first baijiu serves we’ve really adored, and it really demonstrates the potential the category has in cocktails. 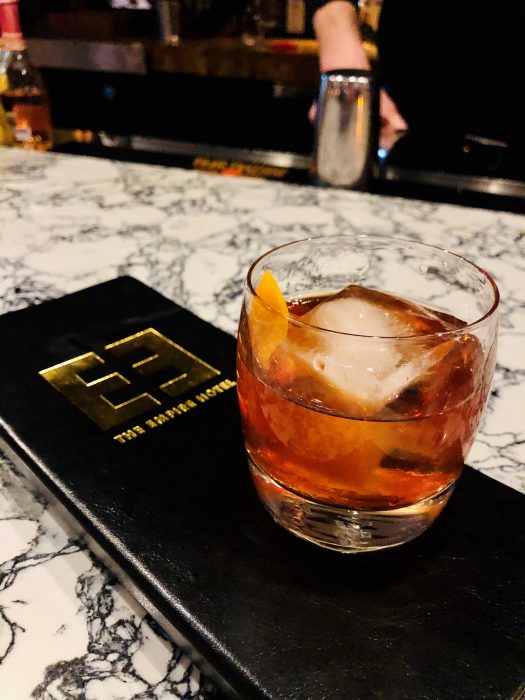 Much more Chuck Bass than anything in a flute

XOXO… yes, we headed to The Empire with one iconic (yes, I said it) TV programme in mind: Gossip Girl. This is a hotel made famous by highly flawed character Chuck Bass, a ladies’ man with an off-the-charts ego who loves boozy serves. In honour of the show, we rocked up and swiftly ordered a Chuck Bass cocktail – which arrived in a flute and felt… well, not very Chuck at all. But this was our first and only criticism. The bar was incredibly fun, the team was brilliant, the serves incredibly tasty, and the environment felt really rather sumptuous. Plus, The Empire is only a stone’s throw from Central Park, so an ideal stop after an afternoon of touristing. 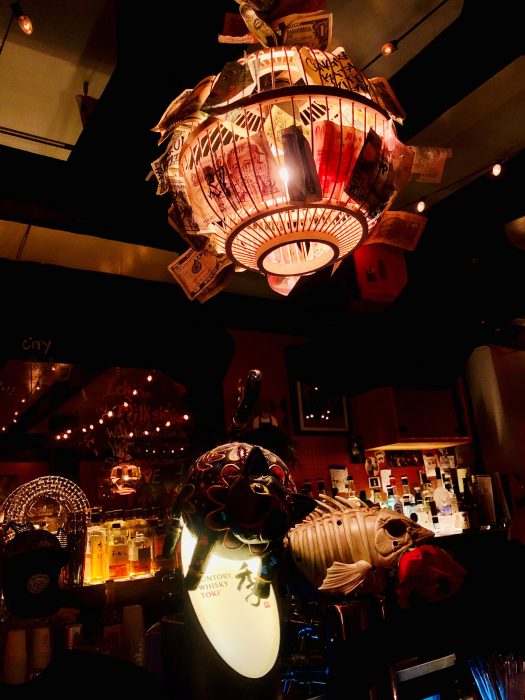 Now this is a fun one. On first appearance, Katana Kitten* genuinely gives off dive bar vibes, albeit with a kitschy spin. It’s a two-level space filled with lights (it looks incredible after dark) and is filled to the brim with stylish types (definitely make a reservation if you are in a group). The Japanese-US hybrid food and drink menu is impressive, but everything remains familiar enough to be easily navigable. Highballs are a speciality – we especially enjoyed the Aki Paloma (Tequila and grapefruit, obvs, with jasmine tea, fig leaf and smoked pomelo salt, too), and the Belle Epoque (heavier, with Irish whiskey, vermouth, miso-sesame orgeat, creme de cacao, lemon, ginger, and absinthe). Oh, and the whole thing is highly Instagrammable, in case that’s important to you. 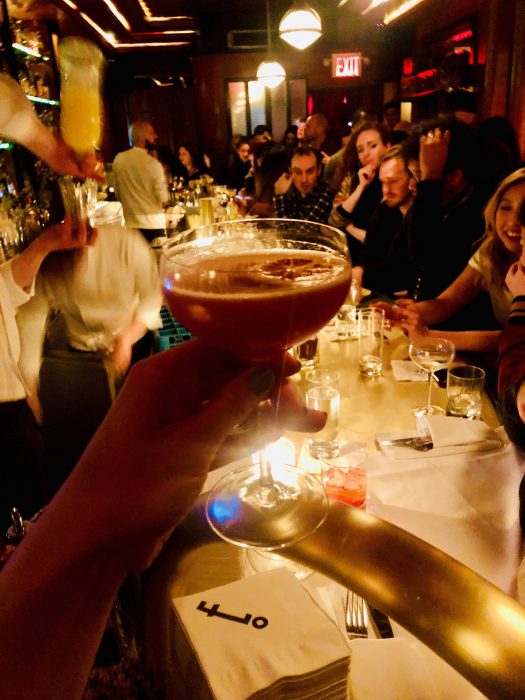 Good vibes and the Billionaire Cocktail at EO

Almost opposite Katana Kitten (it would be rude not to stop in at both if you’re in the West Village), lies Employees Only. Some say it’s not what it once was. We say it’s a riot of fun with a fabulous classics-heavy menu, and is possibly the best spot to people-watch. The bar space was filled to the brim, mostly with what appeared to be folks on first dates (hence the joy in observation), and despite being incredibly busy, the floor and bar team were happy to have a little chat and provide recommendations. The Ginger Smash was a perfect pick-me up and mega refreshing (muddled ginger root and kumquat, gin, apple liqueur and lemon juice), while the brash and boozier Billionaire Cocktail (bourbon, lemon juice, and homemade grenadine and absinthe bitters) was splendidly potent. Remind you of a Gossip Girl character..? 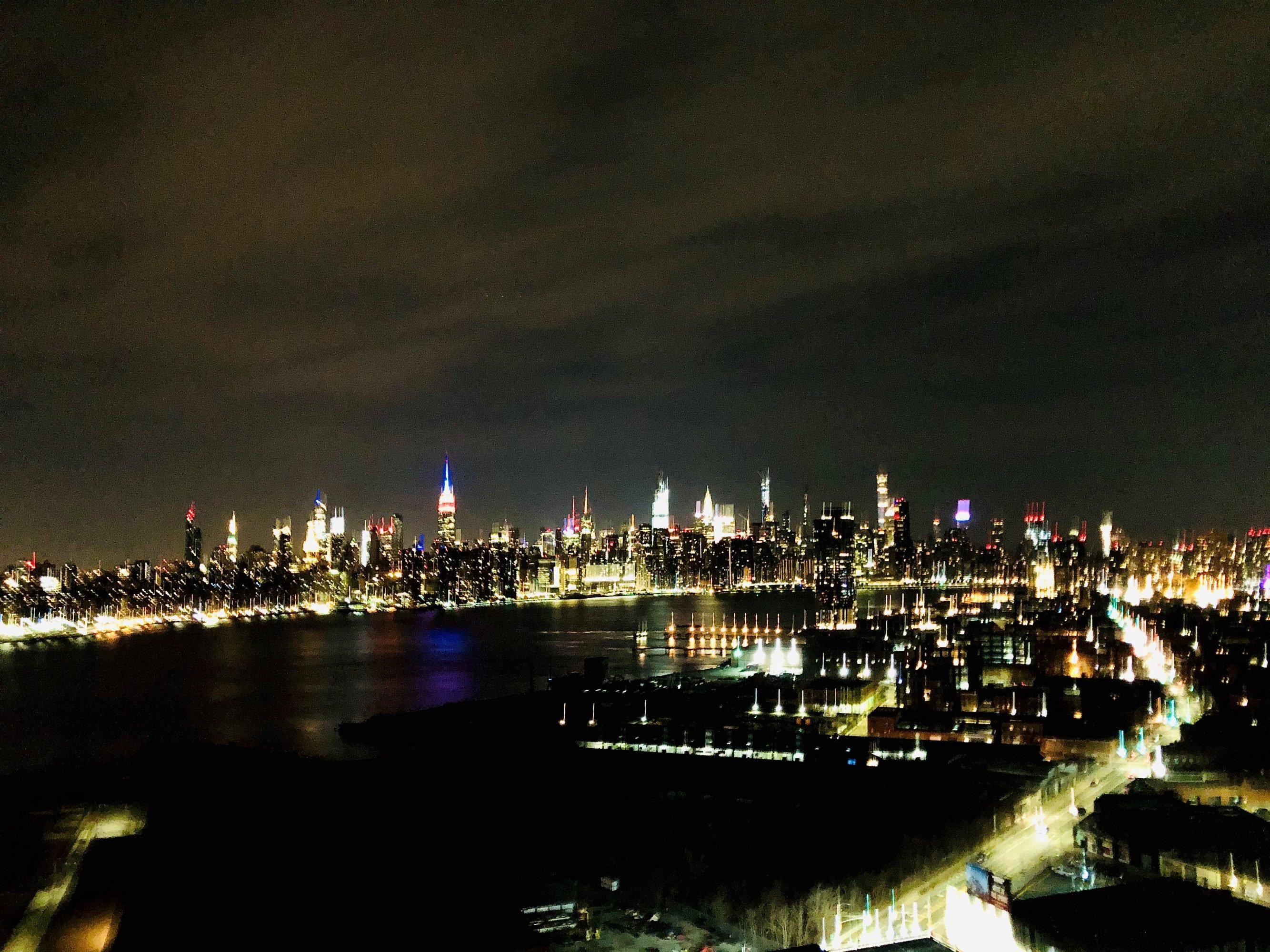 Where to go for both an incredible view of Manhattan, and a genuinely exciting drinks programme? Outside Manhattan, it transpires! The trip over to Williamsburg is absolutely worth it for this one. Chef Andrew Carmellini’s NoHo Hospitality Group is the brains behind the 22nd floor rooftop operation, which, while cocktail-focused, also offers some delectable bites (if you don’t adore the butternut squash hummus, we probably can’t be friends). And the drinks are so good, you almost forget about the devastating view. Almost. There’s a mix of classic and signature serves; we adored the Vicious Circle (essentially a Martini with gin, vermouth and Green Chartreuse), and The Battleship (reposado Tequila, sherry, agave, lemon and bitters) was also heavenly. Obviously it’s a popular spot, so making a reservation is highly recommended. 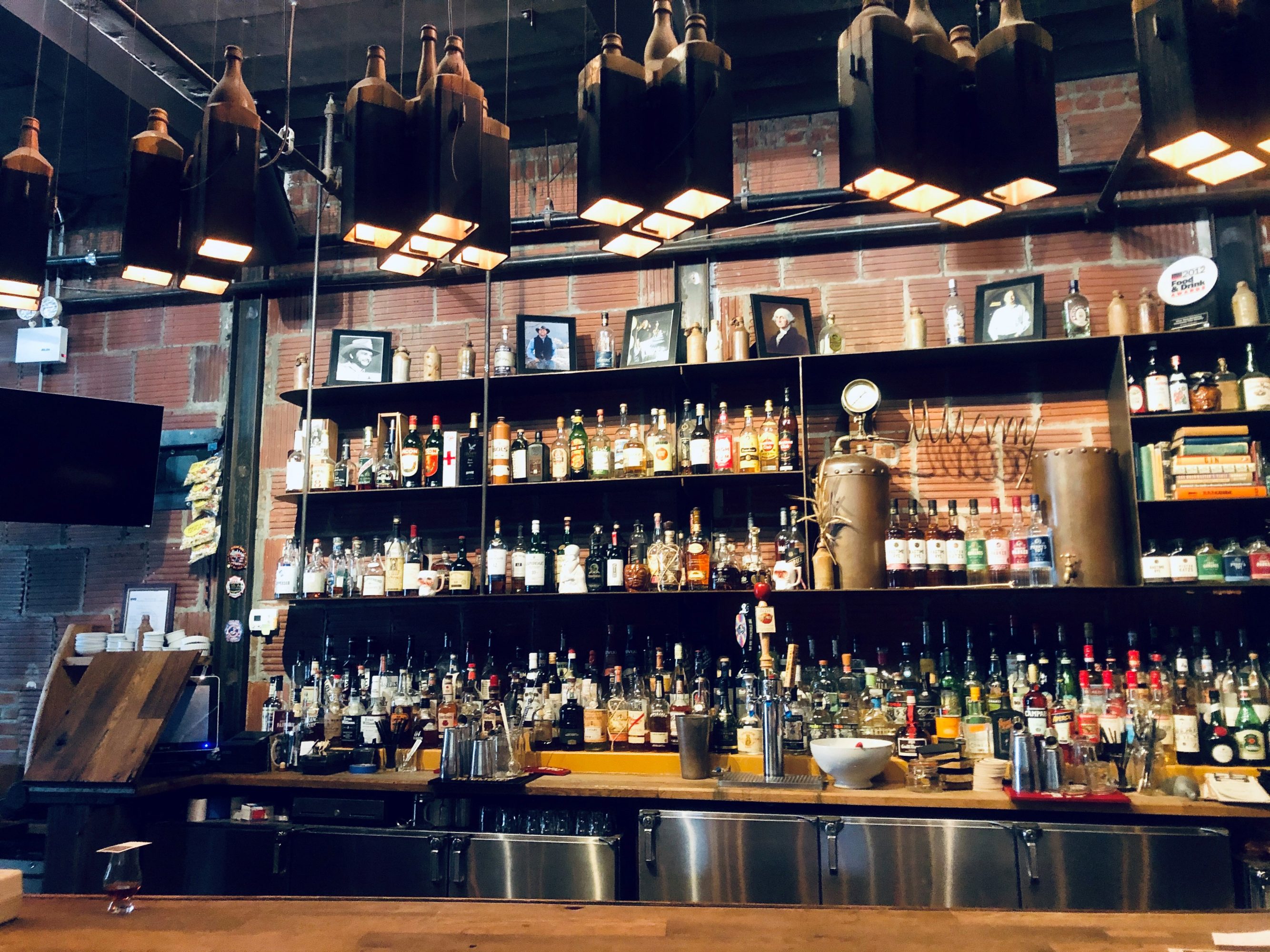 Drink in an actual distillery

Fancy something a little more down to earth, and set in an actual distillery? This unpretentious spot at New York Distilling Company (NYDC) packs a punch with its full-service bar, sizeable cocktail offering and impressive craft beer spread in a cosy, welcoming and relaxed setting. There’s the full complement of NYDC booze, as you’d expect, but the team genuinely wants to nurture a neighbourhood bar vibe, so there is a plethora of other options, too. We had a dram of something very special (whiskey from the first-ever NYDC cask!) and while we can’t guarantee the likes of that, there’s all kinds of tastiness. And complimentary distillery tour options at the weekend, too! Can’t say fairer than that. 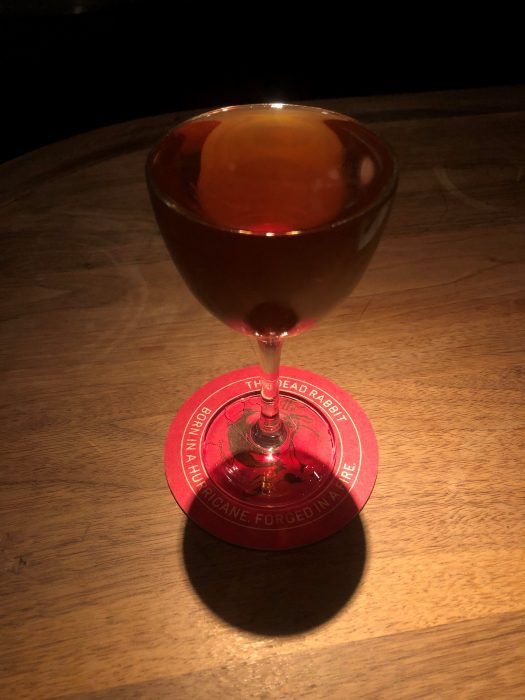 The big one. The one that’s won all the awards. The Irish bar gone superstar from Jack McGarry and Sean Muldoon. Downstairs is The Taproom, where we mostly hung out, home of the renowned Dead Rabbit Irish Coffee, hearty food, and a cocktail menu that delights, even if it’s not the main focus (we rocked up in the afternoon so The Parlour, with its celebrated menu, wasn’t open yet). That said, the drinks ROCKED. A word of warning though – Google (and Lyft, for that matter) have The Dead Rabbit pin in the wrong place. Use both with caution to get you to the Lower Manhattan vicinity, then actually walk along Water until you get to number 30. The bar is NOT in the office building with Le Pain Quotidien, however much the apps insist! 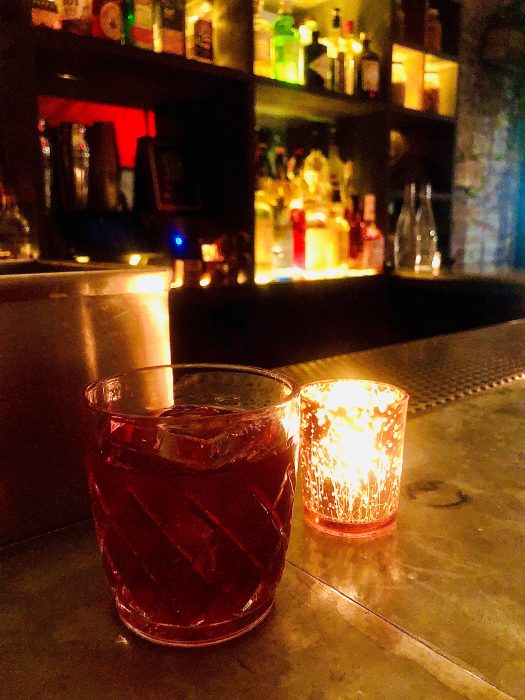 The glories of Mace

A minimalist, unassuming brick-lined spot in East Village that offers surprise and delight in huge helpings through its unexpected, spice-based drinks menu. At first, it’s tricky to tell whether you should navigate by cocktail number or spice name. But the team will chat you through, and dietary requirements the cocktails meet are clearly displayed (a huge bonus that many bars could learn from). The eponymous Mace itself is a joyous concoction with its Aperol and aquavit base, and we also liked the Corn Husk, an unusual medley of corn husk-infused mezcal (name makes sense), Campari, sweet vermouth, more corn husk (charred this time) and cayenne. A must-visit if you like your cocktails on the weird and wonderful side. 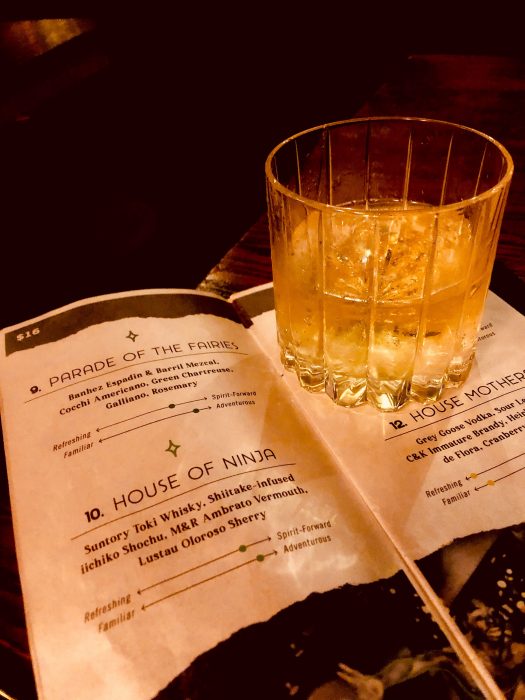 Parade of the Fairies!

A joyful spot not all that far from Mace, but with a very different vibe. We were there on a quietish Tuesday; there was a cocktail class taking place in the bar area, groups of friends were chilling, and a couple of people were having a quiet drink on their own. The team were engaging and easygoing, with a sixth sense for when a guest wanted a chit-chat, and when they wanted to be on their own. It’s a breezy space, almost with a sixth-form common room vibe, but for actual grown-ups. And the drinks! The menu came with a handy navigation guide, helping you choose from something refreshing or spirit-led, comforting or adventurous, with a little sliding scale detail under each serve. So easy to understand! Our favourites were the Parade of the Fairies, made with mezcal, Cocchi Americano, Green Chartreuse, Galliano, and a good helping of rosemary, as well as the delicious Gladys Bently, with bourbon, black eyed peas, rum, maple and cacao. Both on the boozier side, and both brilliant.

*Sadly nothing to do with top 90s girl band Atomic Kitten.