As the world begins to reopen for travel, we’ve scouted out some of the new bars that are opening abroad to add to our bucket lists – when we can finally visit them. Here are seven new international bars with mouthwatering menus.

Is it just me or is your Instagram feed currently full of other people jetting off to far-flung places for their first dose of international travel in the last 18 months? #Outofofficeon has never been more triggering. There has also been a slew of bar openings around the world as their respective homes have reopened for tourists and locals alike.

From Barcelona to Hong Kong, Madrid to Singapore, our favourite holiday spots have just added some new spots to bar fans’ bucket lists. And while we’ve had some exciting new additions to the drinking scene here at home, we’d be lying if we said we weren’t excited to get off British soil. Green, amber or red list (vaccine passports or no), we’ve rounded up some of the best you should visit when you can. 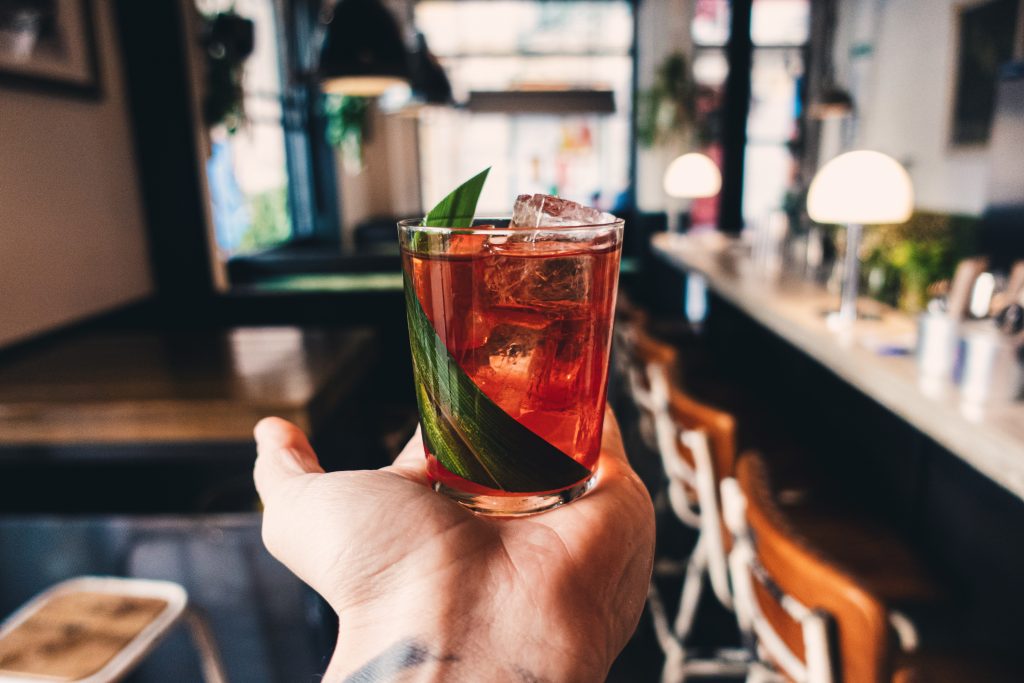 Long drinks are the speciality at Fat Schmucks, Barcelona

From the award-winning team behind Two Schmuck (which sits just two doors down) is Fat Schmuck, a new all-day restaurant and bar serving American food with pan-Asian influences and long drinks. Originally a six-month pop up, this now permanent new destination venue will give fans of Two Schmuck’s stirred down and classic cocktails something a bit different, with long drinks and spritzes taking centre stage, alongside 12 cocktails on tap.

We like the sound of the Not a Paloma: a carbonated cocktail built around buttered Tequila, mezcal, pear eau-de-vie and grapefruit with a rim of seasoned tajin (a well-known Mexican condiment comprising mainly lime, chilli and salt). Judging by the antics at the venue a couple of weeks ago (Flamenco dancers, seafood-strewn tables and Mariachi bands) Fat Schmuck is going to go off! 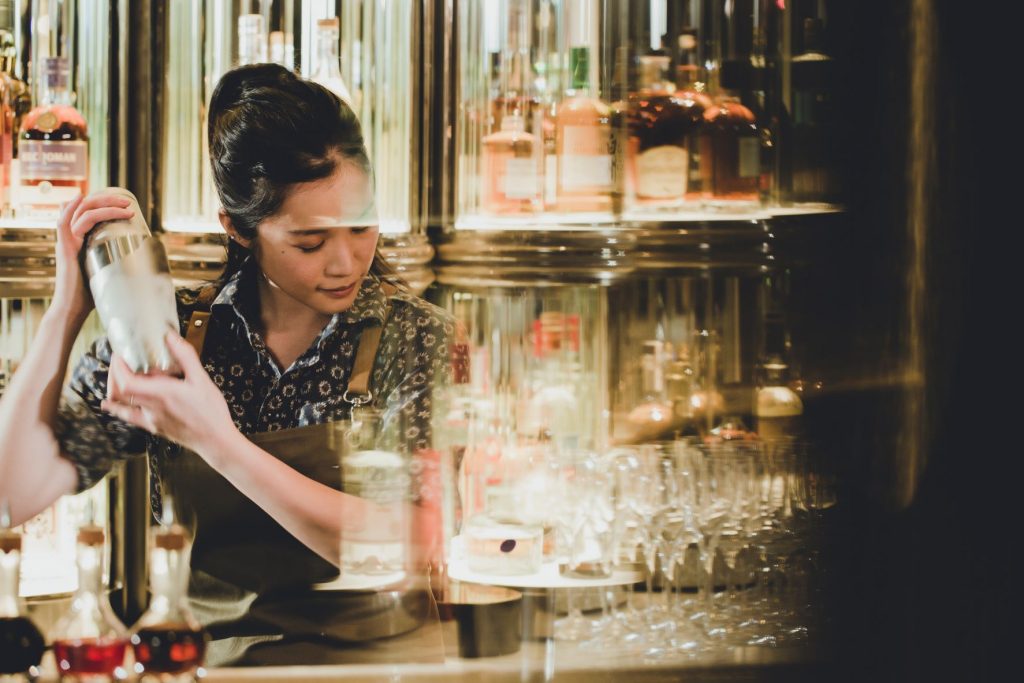 Behold: the ground floor of Hong Kong’s Four Seasons has a new drinking hole in place of its Blue Bar. Argo – headed up by Lorenzo Antinori whose previous tenures have included Dandelyan and the American Bar at The Savoy – looks over the city’s Victoria Harbour and takes its name from the ship that appears in the Jason and the Argonauts myth on the hunt for the Golden Fleece. That sense of discovery is mirrored by the drinks menu which offers spirits flights, bottlings that have never been seen before in Hong Kong, as well as the bar’s own gin and the world’s first AI-produced gin too.

Another country, another Four Seasons, this time the hotel group’s new outpost in Madrid where gastrobar Isa is soon to open. Managing the bar will be Sophie Larrouture, a bartender from Paris who, during a stint in Switzerland, was named the countries Best Bartender of the Year in 2016 at Diageo’s World Class competition.

While you wait for Isa to open (and we wait for more intel on the cocktail offering) the hotel’s El Patio and Dani dining spots are already turning out inventive drinks offerings like vermouths straight from the barrel as well as Madrid-inspired cocktails: La Mariblanca pays homage to the goddess Venus who is a symbol in the city and combines Verdejo white wine, Ketel One vodka, Italicus, Appletizer, Chinchon and Supasawa. 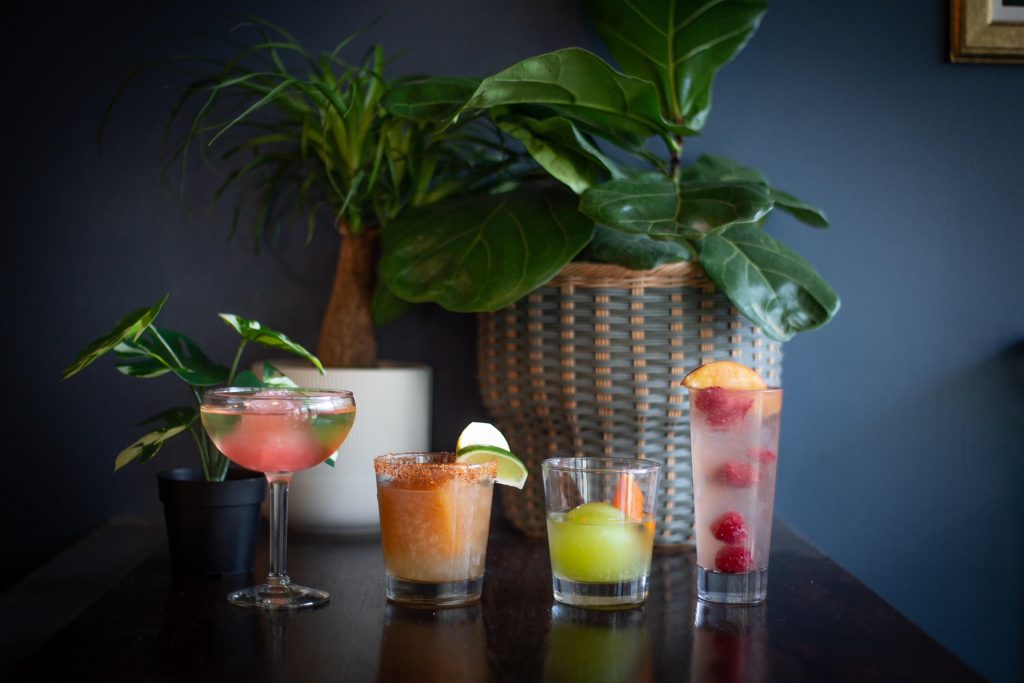 Drinks at Philomena’s in New York

Speciality ice is the order of the day at this new Williamsburg joint (see photo in header) from brothers Kyle and Sean O’Brien. And they won’t just be carving them beautifully – they’re infusing them too. Its namesake cocktail, the Philomena, features a watermelon-rose ice cube in Prosecco; then there’s the Felix with a cucumber, lime and tajin (there it is again) ice cube in mezcal and expressed orange; while the Aileen sees a habanero ice cube in Tequila blanco, guava, lime and Cointreau.

From the brains behind everyone’s favourite Maybe Sammy, comes Dean & Nancy atop Sydney’s new A by Adina hotel. Mid-century surrounds are juxtaposed with playful cocktails. Guests who pick the Rolling a Double (Havana 3, pineapple shrub, coconut water and rum Agricole) will be given a pair of dice – roll, you guessed it, a double and they’ll get a complimentary glass of Champagne.

For a more sensory experience, the Coffee Champagne (Mr Black, vodka, peach wine, vanilla, orange blossom and Champagne) comes with a vanilla and coffee-infused hand cream meaning drinker will get a hit of its aroma with every raise of the glass. We also like the sound of the mini food and drink combos, specifically the mini vodka Martini and oyster nam jim (a spicy chilli, garlic and ginger dressing).

The Fed is inspired by the great British pub, apparently

There’s a new British pub-inspired drinking destination at Boston’s The Langham. The Fed mixes British pub touches with New England influences on the hotel’s ground floor, although those more familiar with an actual British pub may not see it reflected in the slick and marble-topped bar that dominates this new space.

There is (unsurprisingly) a strong draught beer selection, from Harpoon Irish Stout and Cambridge Brewing Company’s Flower Child to a Von Trapp Bohemian Pilsner, while cocktails include Spice Up Your Life which mixes tequila with cardamom, passionfruit and lemon and Deja-Brew with vodka, green tea, blueberry and lemon.

This new Indian restaurant in Singapore has been gaining traction with foodies but its drinks menu has also caught our eye. Showcasing some of Indian cuisine’s most popular flavours, the 12 cocktails at Firangi explore twists on traditional mango lassis, play with flavours of chai and experiment with spices, while also explaining cocktail strength and the drinking vessel guests can expect their libations to arrive in.