As whisky bars go, London’s Black Rock is pretty out there. The team filled a three-tonne tree trunk with whisky and installed it in the basement. They built a whisky vending machine. Now, they’re fitting out London’s first whisky hotel for January 2020. Their mission? To make the liquid accessible to everybody. We talk flavour fundamentals with co-founder Matthew Hastings as the team fling open the doors to their brand new blending suite…

“Flavour is absolutely paramount to everything we do,” says Hastings, as he welcomes our group in Black Rock’s light and airy blending room. “It makes learning about whisky significantly easier than trying to learn about regions and different styles and exceptions to rules. It’s convoluted. Great if you’re really into whisky, but if you just want to enjoy a dram you don’t necessarily need to know all of that.” 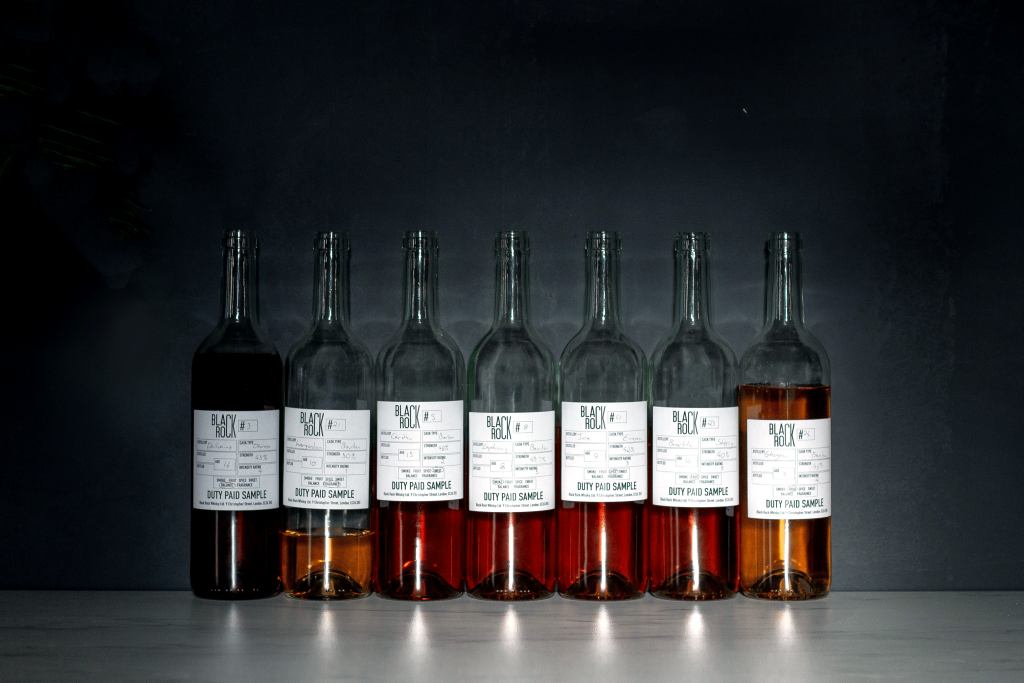 As such, each bottle in Black Rock’s 250+ bottle library is grouped by flavour (rather than region) and labelled with the price, so you know how much a dram will set you back before you order. “We’re removing barriers to entry,” he continues. “No one wants to get stung. It might be that you can afford a £20 dram, but you might not have wanted to spend that on this occasion. Having to have that conversation is not hospitality.”

There’s also the brand spanking new blending suite, where you can blend your very own bottle of whisky so long as you book ahead. After a welcome drink comprising one of Black Rock’s signature whisky highballs – a Smokey Cokey in our case – you’ll delve into the origins of blended whisky and explore the team’s flavour-forward approach through a vertical single malt tasting comprising sweet, fruit, fragrant, spice and smoke.

“While we arrange by flavour, there are certain rules that tend to hold fast,” Hastings says, “so most of ‘smoke’ is still Islay whisky, most of ‘sweet’ is full of bourbon, most of ‘spice’ is full of rye. But there are obviously outliers. Bunnahabhain is an Islay whisky that’s never been peated in its life, there’s no smoke in it whatsoever.” 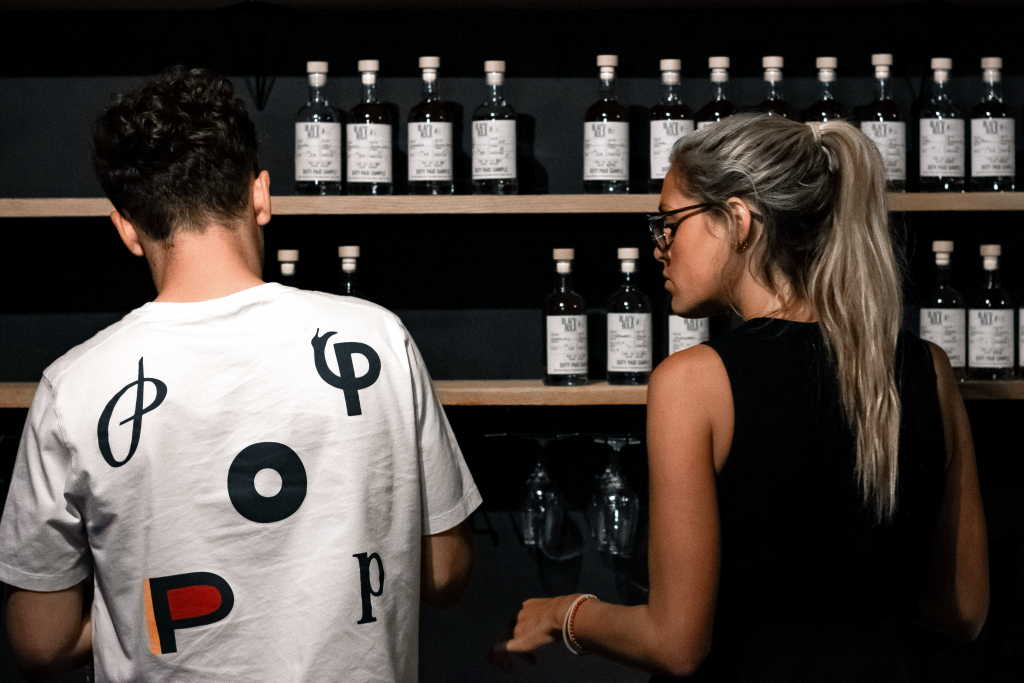 Advice worth remembering, because after you’ve soaked up as much knowledge as possible from Hastings and co, it’s time to blend your own 500ml bottle. And once you’ve settled on the exact specifications, the team will record the recipe on Black Rock’s blending room file so you can re-order it whenever you like.

Whatever your personal whisky preferences, it might help to know which part of the distilling process those notes emerge from. Here, Hastings runs you through the fundamentals of five flavour groups…

Here you’ll mostly find grain whiskies, along with single malts that display lighter characteristics, says Hastings – for example Auchentoshan, a single malt which triple-distills. “You need a little bit of sweet because it helps carry flavours – even if you’re not after a particularly sweet dram, it just helps to mellow things.  The amount you use will change the intensity of the final spirit.”

The majority of the fragrant notes found in whisky come from the specific shapes and angles within the still, Hastings advises, which are unique to each distillery. “If you want to make a light, fragrant, floral-style whisky, you want to increase reflux – which is essentially the vapour falling back down into the still and distilling again – as much as possible,” he explains. “Generally, if you want a lighter whisky you’ll have relatively long stills because you’re making it travel further. Jura has the second tallest stills in Scotland and it produces a very light style of whisky.” 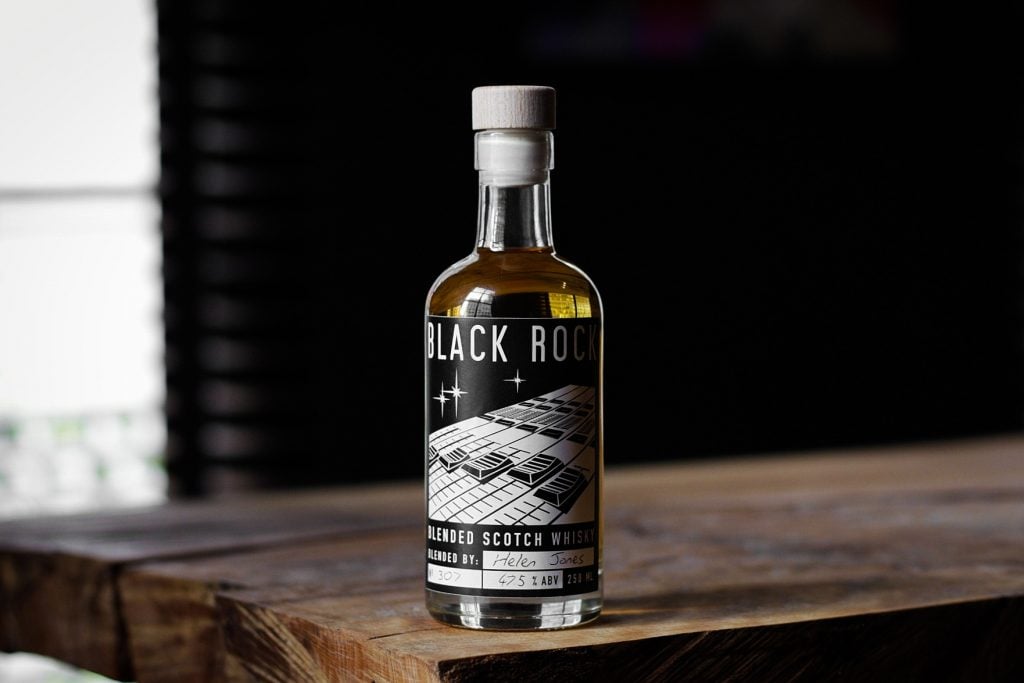 Your finished whisky at Black Rock

By contrast, there are a number of ways to introduce fruit flavours. “You’ve got pretty much the entire production process to play with,” says Hastings, “starting with the yeast strain and fermentation period. Generally, longer fermentations produce more tropical fruit flavours.”
More prominent, though, is the influence of cask ageing and finishing. “Different types of oak from different continents and regions will also produce different flavours,” he adds. “And then there’s the fill – a sherry cask will produce a radically different flavour to a Port cask. Different types of sherry, being the world’s most diverse wine, will produce different flavours on top of that. Whisky in fino will be fresh and apple-y, Pedro Ximenez will give raisins and chocolate.”

Spice tends to be produced either at the end of the distillation process – decreasing reflux means heavier, thicker flavours, which tend to be spicy – or in the casks, Hastings says. “Different casks can help develop those spicy flavours,” he says. “Casks that have had more than one fill tend to produce spicier qualities, because you’re getting past the initial sweet vanillins you see in newer wood and any residual liquid from a first fill sherry or a first-fill bourbon cask.”

The peating process occurs right at the beginning of the process, when you’re essentially smoking the malted barley dry. The smokiness of a whisky is measured in ‘phenolic parts per million’ (known as PPM), which starts high and decreases rapidly throughout the rest of the distillation process. “You’ll lose some in the mashing stage, distillation loses a tonne depending on the type of stills, and then during maturation – especially in older whiskies – you’re constantly losing smoke,” Hastings explains.

Cocktail of the Week: The Snowball