The winner of The Rum & Cola Trophy at this year’s IWSC wasn’t from Jamaica or Cuba; it was Cabby’s Rum from London. We met with its founder Moses Odong, who you won’t be surprised to hear is also a cab driver. On the agenda? Rum, Bradley Wiggins and whether the Knowledge makes you a better distiller…

A railway arch in Bow, East London, is probably the last place on earth you’d expect to find a rum distillery, but step inside the home of the Taxi Spirit Company and there’s a gleaming copper and stainless steel still. Its proud owner, Moses Odong, took the time out of his busy schedule of distilling, cabbing and being father to four children (how does he have the time?) to answer some searching questions. 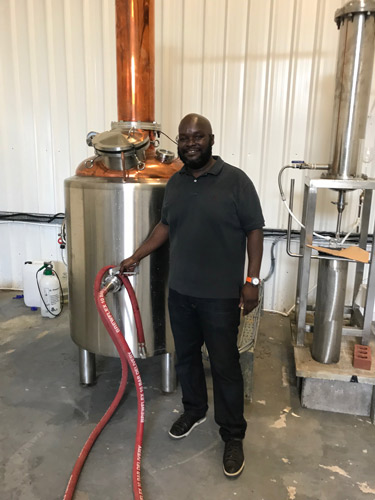 MoM: Moses, thank you for taking the time to talk to us. How did you make the jump from driving a cab to distilling?

Moses Odong: I’ve been a cab driver ten years. But I wanted a change, I was getting a lot of pain, back, hip and everything, So I want to try something different that I had never tried before and to challenge my brain. I went to the local breweries in London and I asked for an internship and none of them got back to me.

So I threw all the toys out the pram, I said ‘you know what, you’ll remember me before I remember you, I’m gonna set one up!’ I wrote an email to Heriot-Watt University, to a lady called Dr Annie Hill and she introduced me to one of the lecturers, Abhishek Banik, I asked him to teach me how to brew and distill and he came to London for a year, two days a week, to teach me.

I worked with Abhi at Ogilvy vodka in Scotland for a few months. I spent three or four days a week there and we just distilled. It’s a passion so you don’t put a time on it. So I’ll go there, come back, straight in the cab, do a few hours, rest, carry on, get ready for the next week, go back up again. The journey begun, the hardship begun, five stone lighter and we’re here! Literally I’ve lost five stone, that’s a good thing!

Do you just make rum?

I have a column still designed by Abhi, and we make a rum and a gin. We’re mainly a rum distillery but the gin came about by accident where we were creating a spice basket for the spiced rum and Abhi suggested ‘why don’t you put the same thing inside a gin and see what happens?’ and it hit the spot! It was like a one-hit-wonder basically. But our main thing is, we’re a rum distillery. We get our molasses locally from Wimbledon. I ferment in a 300 litre stainless steel container. Then I do a six-hour distillation and distill three times.

Why did you call your still Irene?

She’s named after my older sister. She passed away a few years ago but this is named after her. I’m originally from Uganda and she brought us here to London 29 years ago. This is home, I went to school here in Kilburn with Bradley Wiggins. He’s done well. He was a motivation for me: if you want to do something, do it to the best. 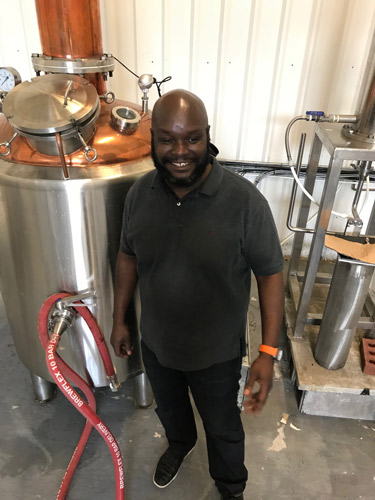 How long do you mature your rum for?

To be called ‘aged’ you have to age it for at least a year but we’re maturing it for five weeks in a bourbon barrel and then from there charcoal filter it and bottle. We want to put the flavours of the barrel within it but we don’t want it to take on too much of the barrel flavour, if you get what I mean.

Do you think you’d ever make an aged rum?

It’s expensive to start now. But in due time, it is kind of like the end game. We are a rum distillery, first and foremost. So if we bring a white rum, spiced rum, dark rum, flavoured rum, it’s rum.

I do drink other rums but I think, for me, it kind of takes away from what you’ve created and your own love, you know. Because you might taste something that’s exceptionally good and then you start doubting what you’ve done. And when you start creating doubt on what you’ve done, it’s a bad vibe. So I drink others, but I’m biased, and that’s the God’s honest truth. Everywhere I go, I tell my friends, if you’re going somewhere, if you go to the bar, you make sure you just order ‘Cabby’s’ you know and that’s it.

How have you gone about selling Cabby’s Rum?

Legwork! Knocking on every single door! I mean the first week I got in the cab, it got intense. I prefer face-to-face interaction with people rather than dropping an email or rather than someone else going there, I’d rather tell them the story myself. I’d rather meet them and introduce myself and after introducing myself I introduce the product. 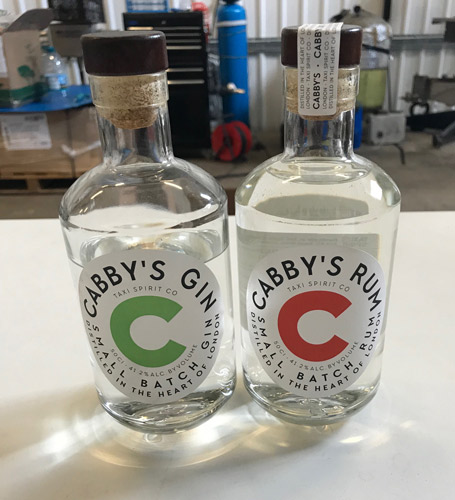 Does the Knowledge* help in any way with distilling?

The Knowledge is intensely hard, don’t let anyone tell you any different. It’s got a high rate of divorces, The Knowledge, because you get so stuck into the map that you forget your surroundings and things like that. And you’re doing this for three years straight. But they say our brain grows by 25% so I hope that’s true! And it helps with memorising steps, memorising the process and then memorising the books. Because when I started with Abhi I wanted to learn 95% practical and 5% theory, that was the main thing that I wanted to learn and that’s how Abhi taught me. So I spent a lot of time actually doing the process and I spent a good bit of time learning the beer, this is truly mind bogglingly hard. If people understood what goes into making a beer, just a beer recipe, you would never knock a beer, you would appreciate it more.

And do you think you’ll give up cabbing?

No I like my cabbing. You need escapism, you need a break from the norm. So, for me, at the moment, the distilling is a break from the norm, from the cab but eventually I’m going to switch it round where the cabbing will be a break from the distilling. So back and forth. But I’ll still do weekends, I like talking to people. I like meeting people. Every journey is an interesting ten minute conversation. And you never know what interesting person you’re going to meet.There’s always good stories to hear from other people and it kills the day and it’s invasive but it’s a nice kind of invasive, asking people ‘how’s your day, how’s your this?’ ‘What’s your favourite bar in London?’ ‘Give me your top five restaurants?’ And when you ask those kind of questions people say ‘ooh…’

And finally, what’s your favourite way to drink Cabby’s Rum?

As you know, it won a trophy for a great rum and coke so get a good cola. I tried it with Franklin & Sons. Their cola is the original recipe, like they remind me of my childhood. It depends what mood I’m in and it depends how hard the day has been. But preferably; hard day – neat. Medium day – ginger beer. Relaxed day – cola. Ice. I think the lime takes up too much room for the alcohol so I just keep the lime out and just cola. Just get on with it!

*The Knowledge is a fiendishly difficult exam that London taxi driver’s have to take which involves memorising all the streets in central London. Which is why they always know where they’re going, unless you’re going south of the river.

Our Selections for Sherried September Treats

Piedmont part one: The epicentre of Italian vermouth