Diageo has reached a new milestone in its bid to bring back Port Ellen, the iconic Islay distillery that has been silent since 1983. Hurrah!

We don’t know about you, but any news about the return of famous ‘silent distilleries’ reopening gets us pretty excited. So it’s fair to say that ever since Diageo announced a £35 million investment programme to bring back Port Ellen and Brora distillery* back in October 2017, we’ve been all ears at MoM Towers waiting for updates. And we’ve got one, just as Fèis Ìle 2019 approaches. They do know how to spoil us on Islay, don’t they?

Diageo has revealed this week that Argyll & Bute Council has received detailed planning application following community engagement and pre-application consultation with key stakeholders, setting out proposals that will see Port Ellen reopened more than 35 years after its sad closure.

So, what can we expect from the revived Islay legend? Well, Diageo’s plan is for Port Ellen to utilise both traditional and innovative approaches to distilling under one roof, with two pairs of copper pot stills and two separate distillation regimes.

Primary distillation will take place in two stills that exactly replicate the Port Ellen originals, with the aim to recreate the original spirit character of the distillery that has made its single malt Scotch whisky among the most sought-after in the world.

The distillers at Port Ellen will also have the freedom to experiment with new whisky styles, however, thanks to the second, smaller pair of stills which will produce alternative spirit characters. It’s a best of both worlds situation, and we’re very much in favour of it. Port Ellen experimental bottlings? C’mon, people!

The second pair of stills will also pay homage to the former owner of the distillery, John Ramsay, who led Port Ellen in its formative years. Ramsay is credited with establishing its reputation as an innovative distillery in the 19th century, pioneering techniques and equipment that would become mainstays of the industry. 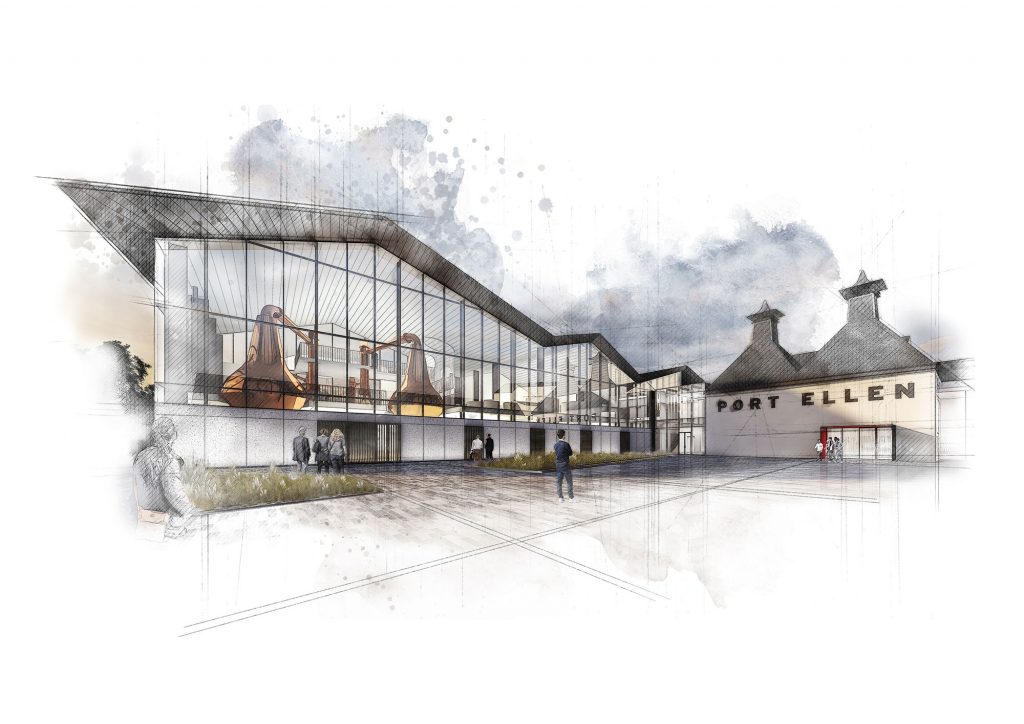 A sketch image of what Port Ellen could look like

Distillation will take place in a combination of modern and heritage buildings, although following its most recent closure in 1983, very few of the original structures remain. What will be present is the original kiln building, with its classic pagoda roofs, and the traditional sea-front warehouses. Both will be restored as integral parts of the revived distillery, while a beautiful new stillhouse will be created to house distillation.

Georgie Crawford, the master distiller leading the Port Ellen project, commented on the news: ‘This is another hugely significant milestone on our journey to bring Port Ellen Distillery back to life. This is no ordinary distillery project, we are bringing a true whisky legend back to life and we believe our plans do justice to the iconic status of Port Ellen and will capture the imagination of whisky fans from all over the world.”

Let’s all hope the plans are approved, we want more Port Ellen!

Master of Malt @MasterOfMalt
3 hours ago
A magnificent maritime dram! @TaliskerWhisky 44 Year Old Forests of the Deep has been made in collaboration with Parley, helping to rewild the world's kelp forests. Full of oceanic influence, it's a real treasure of a single malt.

Master of Malt @MasterOfMalt
3 hours ago
A new philosophy is bubbling its way into whisky creation: ‘beer-first’ liquid. Move over maturation – drinkable wash, with a focus on grains and yeast, is moving to the fore of the conversation. @KristianeSherry explores the approach with three makers.

Master of Malt @MasterOfMalt
4 hours ago
Today’s cocktail has the ability to transport you back to the glamour of pre-revolutionary Cuba with just one sip. It is, of course, the Daiquiri and we’re making it with Ron Santiago de Cuba Carta Blanca.

Five of the world’s most sustainable bars