Inspired by the historical distinction of London Dry gin, Salcombe Distillery Company intends to set a benchmark for flavour in the alcohol-free sphere with the release of New London Light, its first non-alcoholic spirit. We spoke to co-founder and director Howard Davies to find out more about the bottling, the first in a series for the distillery…

The London Dry style rose to prominence in the 19th century as the gold standard for gin production. At a time when such spirits were produced “in rather dubious fashions of very varied quality,” says Davies, the designation guaranteed that the bottling hadn’t been doctored post-distillation. “London Dry was introduced to put some kind of assurance to the consumer about the quality of the gin they were consuming,” he says. The style set a standard for production that continues to this day.

While today’s alcohol-free producers certainly aren’t poisoning their customers, the fledgling category faces its own consistency challenges. Davies and the team sought to bring the London Dry ethos to the alcohol-free sector with the launch of their first 0% ABV bottling, New London Light. “In these early days of non-alcoholic spirits, there’s a mix of quality of product out there,” says Davies. Against this backdrop, New London Light intends to be “the benchmark of taste and flavour in the non-alcoholic spirits sector.” 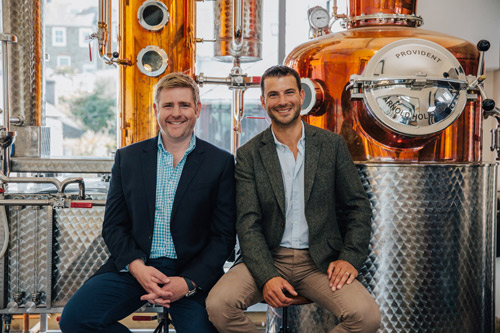 The name ‘New London Light’ doesn’t only refer to the historic gin style. It’s also a nod to the coastal location of the distillery, which lies on the south-west coast of England in the town of Salcombe, Devon. “There’s a couple of other little ties,” says Davies. “Our distillery is by the sea, one of the only distilleries in the world you can reach by boat, and so our product names are often inspired by lighthouses.”

There’s Start Point gin, named for a lighthouse on the coast of Devon, and Rosé Sainte Marie gin, named for a lighthouse in the Mediterranean. New London Light is a lighthouse, too – located on America’s east coast, in Long Island Sound. Incredibly, it was once a beacon for the crews of 19th century Salcombe Fruiters. Built in Salcombe and neighbouring Kingsbridge, these speedy Schooner sailing vessels were designed to transport perishable fruits, herbs and spices sourced from across the globe – including America – back to England’s ports.

Developed by master distiller Jason Nickels, New London Light is made using a two-step process. The first sees Macedonian juniper berries, ginger and habanero capsicum distilled to create a base spirit. “This initial distillation uses alcohol, but at a weaker strength than we would normally do it,” says Davies. Using alcohol at this stage of the process allows the team to capture a fuller flavour profile from the botanicals. “Often when you do a plain water distillation, the flavours don’t come through as much,” he adds.

This base liquid is then blended with a further 15 botanical extracts, including orange, sage, cardamom, cascarilla bark and lemongrass. Some of these flavours are captured in concentrates and oils, while others are achieved through more technical methods, such as vacuum distillation. The team experimented with endless distilling methods before settling on this two-pronged approach. “It’s very much a horses for courses approach, in that there’ll be specific distillation methods and extract methods that are going to be a better fit for specific botanicals or botanical types,” says Davies. 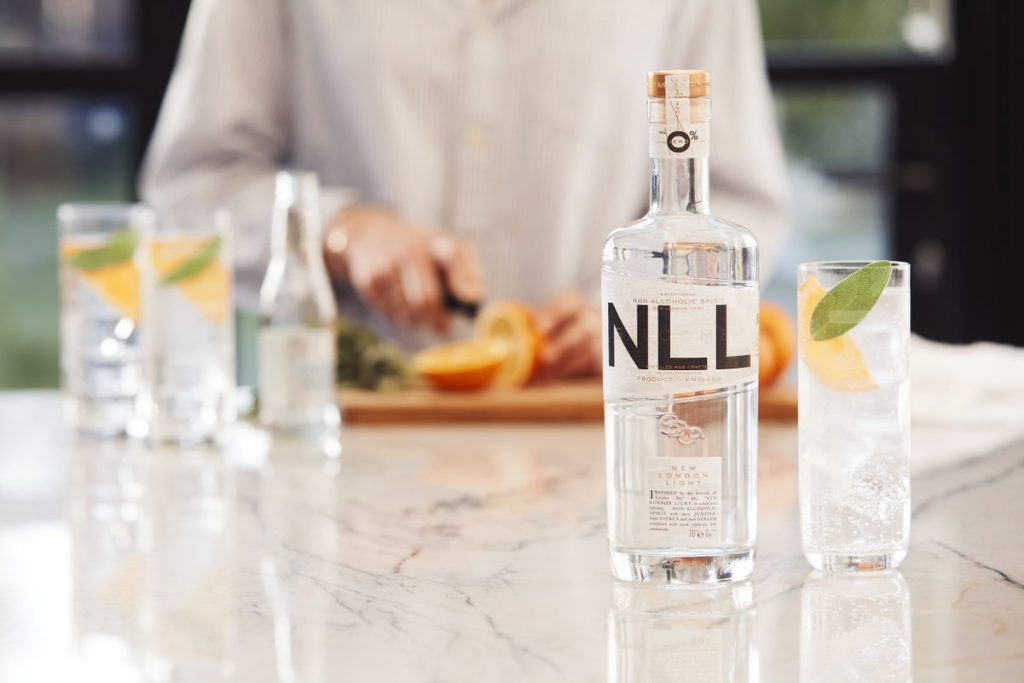 Creating a genuinely tasty non-alcoholic spirit requires a new way of approaching flavour. Davies explained: “The original distillate whilst containing alcohol has proportionally a very concentrated botanical flavour load, and is intended to be very diluted. Therefore when blended with the other botanical extracts and water the alcohol strength is diluted significantly such that it’s final strength is below 0.5% ABV which qualifies as non-alcoholic”. Using multiple methods is where the future of the category lies, reckons Davies. “I don’t think there’s ever going to be one method that you can use across all of the botanical flavours and ingredients,” he says. “The best non-alcoholic spirits coming through are going to [use] a variety of different methods, depending on the type of botanical or flavour you’re trying to achieve in your final liquid.”

So, how should you drink New London Light? There are a whole host of cocktail suggestions on Salcombe Distilling Co’s website, along with signature serve New London Light and Light. “It’s essentially New London Light with a low-calorie tonic,” says Davies. “It’s garnished with a slice of orange – to compliment the citrus flavours coming through – and a sage leaf, which brings an amazing warm, herbal note. It really picks up that botanical within the spirit, so you get this lovely two-tone effect of the garnish on the nose and then again on the palate.”

Corks may be popping on bottles of New London Light this Dry January, but when it comes to distilling sans-booze, the team’s only just getting started. New London Light is the first bottling in what’s set to become a full non-alcoholic range, with two more booze-free variants planned for release before the end of the year. While the finer details remain well and truly under wraps, the focus for Davies and the wider Salcombe Distilling Co. team is centred on “innovation of taste and of process”.

“It’s about breaking new ground in terms of innovative flavour combinations and coming further away from traditional alcoholic drink flavours,” he says. “In the alcoholic sector, drinks are based on ingredients that you can ferment to create alcohol. We don’t have those constraints in the non-alcoholic sector, and so it’s a great opportunity to use less-familiar ingredients. It’s also about innovation in terms of the techniques that we use to extract the best possible flavour from these botanicals and plants.”

Nose: Bursting with fresh lime zest and orange sherbet. A whiff of cardamom and violet, underpinned by a piney juniper note.

Finish: Smooth and slightly drying. A tangy peachiness turns herbaceous, with fragrant lemongrass, fresh coriander and a hint of menthol.

Salcombe New London Light is available from Master of Malt.