Beer brewed with lobsters, wild yeasts and barrel ageing, all in a day’s work for the team at the Wild Beer Company in Somerset. We tried the latest release, Murmur, a beer with a distinctly vinous taste.

Located next to an award-winning cheese producer, near Shepton Mallet, in the heart of cider country, you’d be hard-pressed to think of a more classic West Country site than the home of the Wild Beer Company. But there’s nothing cosy or comforting about the beers produced here. Whereas most British breweries are content to work within quite a narrow framework of beer styles such as IPAs, porters, best bitters, and for the really adventurous, lagers, the Wild Beer Company are a little bit, well, wild. 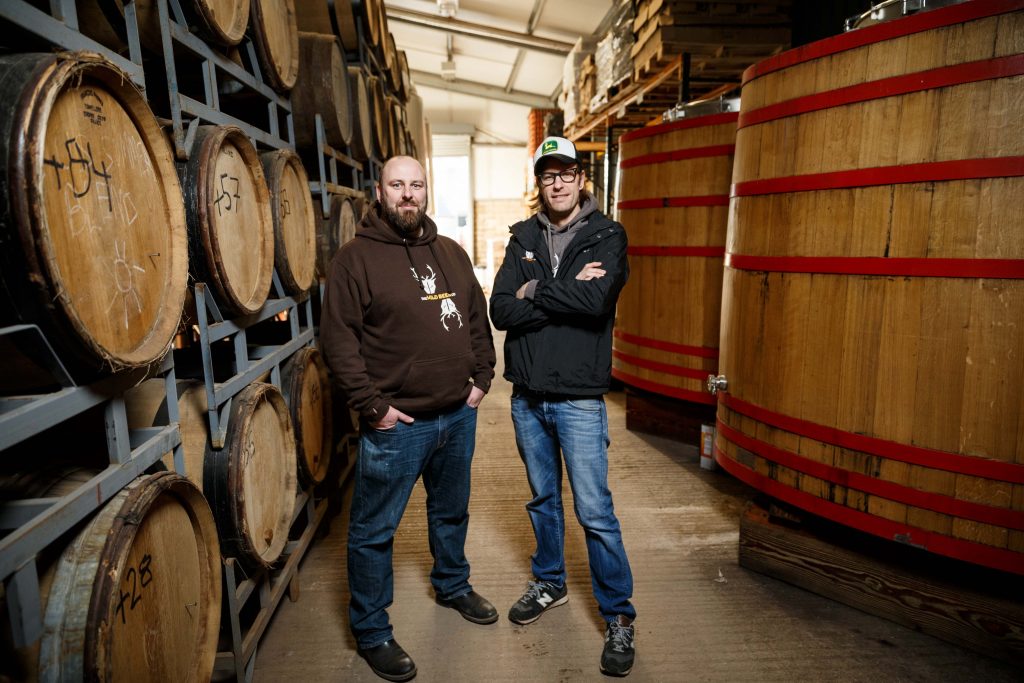 The firm was set up in 2012 by an Englishman Andrew Cooper, who looks after the business side, and a Californian Brett Ellis, the brewer. They began brewing in the kitchen of neighbouring Westcombe Dairy producing 2400 litres of beer a week. Everything was bottled by hand. Since then they have expanded and along the way winning Best Drink Producer at the BBC Food and Farming Awards in 2017 among other honours. The company’s beers are now distributed internationally and it runs a bar: Wild Beer at Wapping Wharf in Bristol.

And yet success doesn’t mean playing safe. The company produces a dizzying array of products including a beer that tastes of salted caramel and one made with a mixture of local and Norwegian berries. Perhaps the strangest beer they’ve made was called Of The Sea and it was flavoured with seaweed, cockles and lobsters. Yes, real lobsters. The shellfish were cooked with the malt during the mashing stage, then removed and eaten by the lucky brewery team while the beer was fermented. The results were odd but delicious. Like a beery seafood bisque.

As well as unusual ingredients, the Wild Beer team are crazy about barrels and yeasts. The inside of the brewery looks like a winery or distillery, crammed with oak barrels and foudres (large oak containers). The cask ageing gives many of the Wild Beer products a wine-like tang. Then there’s yeast. Most breweries use one yeast for all their beers. In fact, modern brewing is based on isolating a particular yeast that consistently produces the flavours that the brewer is looking for. Wild Beer, on the other hand, uses a plethora of yeasts including wild ones found in the air. These offer more flavour, potentially, but also more risk. Especially when combined with old wood, a rogue yeast might turn the beer to vinegar. But it’s worth it when you try the quality of the products.

Which brings us on to this week’s New Arrival. It’s called Murmur, named perhaps after REM’s 1983 debut album (or so we like to think). It’s made using malted barley and wheat, fermented with a saison beer yeast and a yeast normally used to make white Burgundy to create a beer of 5% ABV. The flavours from fermentation are complimented with fruity vivid hop varieties, Ekuanot, Nelson Sauvin and Hallertau. The result is something distinctly tangy and fresh with sour citrus, fresh hay and savoury herbs. Ideally it should be drunk out of a wine glass rather than a pint mug alongside food. Best bitter, it ain’t.

How the bushfires are affecting Australia's wine