New Arrival of the Week: The Drinks Lab Strange Bedfellows

Adam O'Connell
No Comments on New Arrival of the Week: The Drinks Lab Strange Bedfellows

Ever enjoyed a blend of rum and whisky before? I hadn’t either. Until I tried our new arrival this week: The Drinks Lab Strange Bedfellows. What prompted this curious creation? Read on to find out.

We’re welcoming a new spirit drink this week. Which is a pretty rubbish descriptor by our book. There’s got to be something more compelling than ‘spirit drink’, right? We might as well call these expressions ‘vaguely familiar booze’ or ‘legal, but without category strong stuff’.

But then, sometimes a drink appears before you, and no appropriate monikers spring to mind. Take our new arrival from the folks at The Drinks Lab. The first in a series called ‘‘The Drinks Lab: Out of Hours Spirit Experiments’, the aptly named Strange Bedfellows brings together two different spirits inside one bottle. Scotch whisky and rum.

So, yeah. What the hell do you call that? Whum? Risky? I’ll say. Purists will presumably be screaming at the screen and calling it madness. Sheer lunacy. And sacrilege besides. But plenty of you will also be intrigued and wondering if this concoction is just mad enough to work. 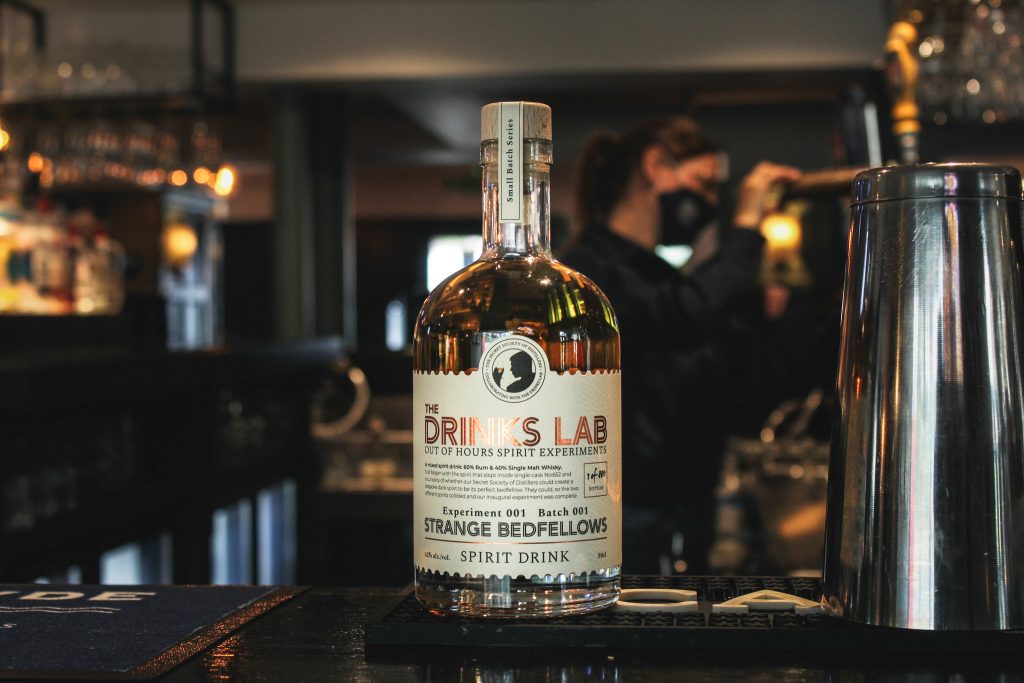 A divisive coming together

First, let’s get to grips with exactly what we’re dealing with here. The whisky in question is a single cask, no.652 we’re told, which was sourced from the Highlands (not surprising the distillery didn’t put its name to this, although they rarely do in fairness). The whisky is said to be light and creamy with notes of orange zest and fudge. Eighteen different samples of rum were made to match the whisky and the winner was a dark ruby rum with a base of raspberries and cinnamon. The split is 60% rum, and 40% whisky.

The guys at The Drinks Lab are obviously aware that this will divide opinion. You could argue that’s the point of this, given the press release contains a quote explaining that the team “now wait with bated breath as they know that many whisky fans will see the blending of a single cask of single malt with this unique dark rum as sacrilege”. The marketing bumf also says that the brand encourages “those curious individuals to try this first test”. And you don’t have to ask me twice.

More spirit experiments are tipped to follow this year, and beyond. The founders of The Drinks Lab, entrepreneurs Craig Strachan and Hannah Fisher, have been working away on a variety of crazy boozy imaginings ever since 2017 when they created a consultancy and innovation facility designed to assist those wanting to launch drink brands. 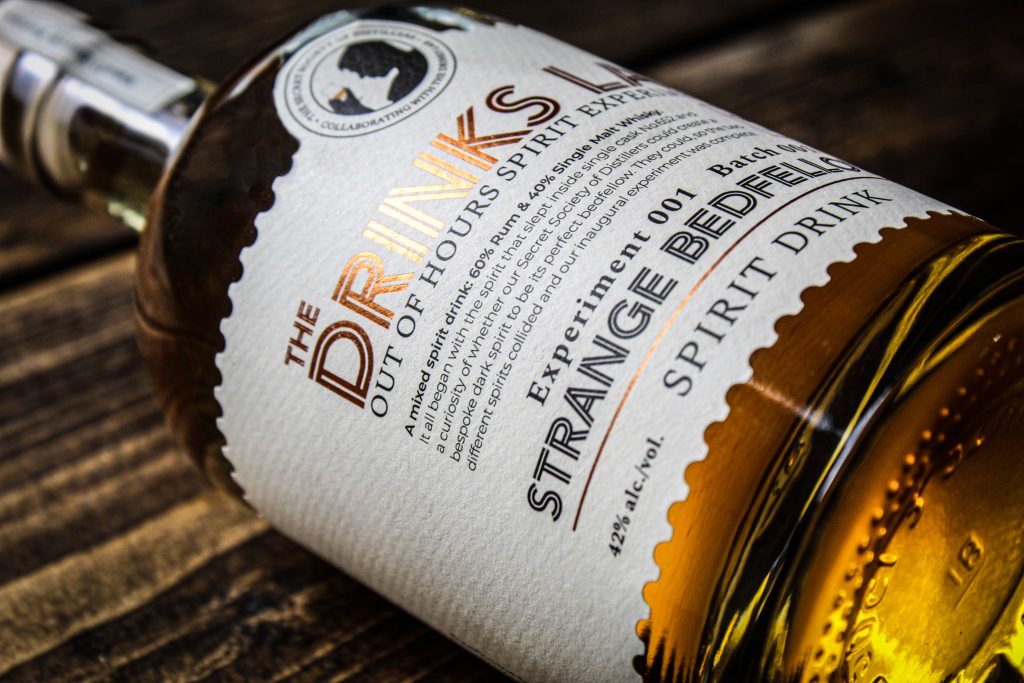 This is just the first experiment. More will follow…

If you want something done right, do it yourself…

It was inspired by the problems the duo had in launching their own projects. Those stories of folks chatting about distillation dreams in a bar and then putting in some elbow grease to make it happen tend to undermine just how hard it is to build a brand. Challenges are around every corner, mostly capital. And even if you want to outsource some of the hard work, then you have to contend with running into issues over batch sizes, poor client service, lack of knowledge, and more.

Strachan and Fisher set about establishing a model that would help budding booze makers go from concept to shelf in as little as three months. This entails an ‘all under one roof’ service including recipe development, branding, trial production, small batch bottling, and commercial guidance. The plan worked. The Scottish-based business now employs 12 people in Port Glasgow and has a client list made up of entrepreneurs as well as large global drink companies including the likes of Diageo, TATA, and Fever-Tree.

By day, The Drinks Lab team spends its time making spirits, non-alcoholic alternatives, mixers, adult soft drinks, CBD, and Hard Seltzers. At night, however, it’s a different story. That’s when Strachan and Fisher get busy developing their own curious creations. And we’re about to see the results. Well, of the first experiment anyway. 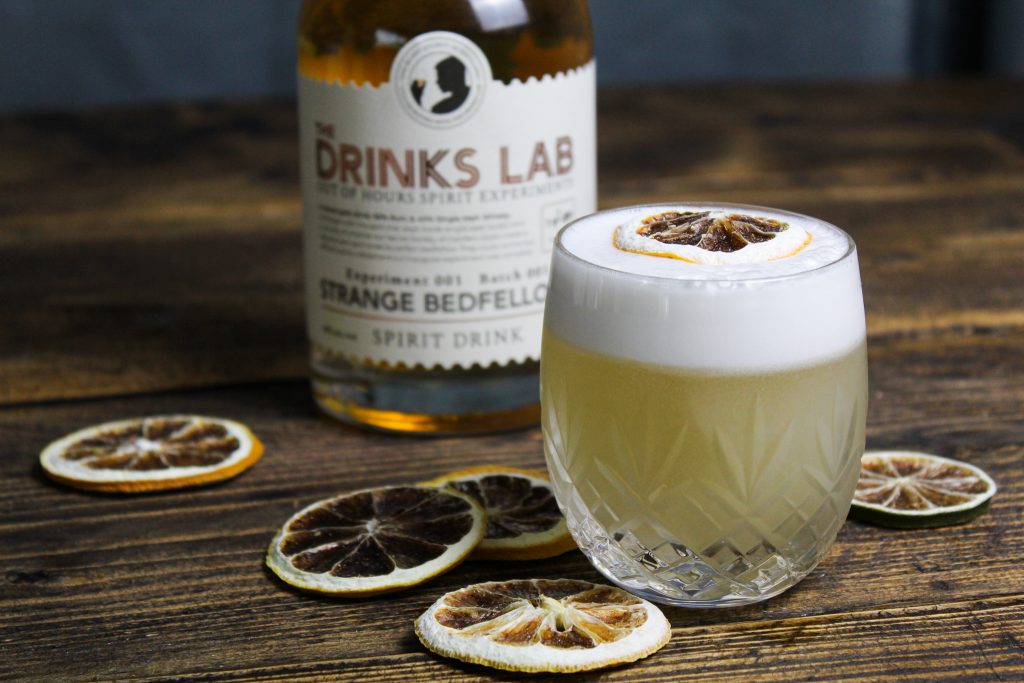 What to make of Strange Bedfellows

Strange Bedfellows is a curious experiment, one made to raise eyebrows and provoke a reaction. But truth be told, the liquid in the glass doesn’t taste as controversial or divisive as it sounds. The first thing you’ll notice in Strange Bedfellows is the rum, unmistakable with its bright tropical fruit notes, aromatic spice, and some of that tell-tale raspberry sourness. The whisky’s creamy vanilla, toffee, and orange peel notes aren’t far behind. It’s a competent blend and there’s no doubt the two spirits aren’t at war with each other in the glass, but it’s not a seamless affair and throughout it’s a little rough around the edges.

Strange Bedfellows is ultimately a perfectly palatable drink. This is slightly underwhelming if you were expecting flavour fireworks or something so gross you wouldn’t use it as a disinfectant. This is good news for those who want to see more experimentation and freedom in booze creation. It’s is a worthy first attempt and I, for one, am looking forward to seeing what’s next. Be sure to have a little play with it too. I think it mixes quite well in Highball-style serves (coke, ginger ale and soda water all work well enough).

You should, of course, try it neat first. But if you’re feeling bold then you can have a go at the Strange Sour, the bespoke serve The Drinks Lab has made for its first launch. The idea was to create something that would enhance the rum’s raspberry elements and compliment the whisky’s creamy notes, while vanilla syrup was favoured to match the aromatic cinnamon flavour. Here’s how to make it:

Add Strange Bedfellows, lemon juice, vanilla syrup, and egg white to a shaker and dry shake for 30 seconds without ice. Add ice and shake again until well chilled and strain into a short glass. Garnish with a dehydrated lemon slice.

The charms of a 50 year old Glenglassaugh