We do get spoiled here at Master of Malt with some of the bottles we get to try. You’d think we might get a bit blasé trying old whiskies and other spirits but the excitement never palls.

An array of old bottlings

The last few months have seen some particular treasures featured on the blog: the Brora Triptych containing bottlings from 1972, 1977 and 1982, the 52 year old Singleton of Dufftown, and a 43 year old Talisker. And these were just the ones from the Diageo stable.

Lockdown has been particularly wonderful as rather than go to a crowded tasting in London or Scotland, for the chance to try a thimble full of rare malt, we get sent a dram in the post. This means that we enjoy it at our leisure. It is fascinating to see how these precious liquids evolve in the glass over an evening.

It also means that I can share rare bottles with friends and family. In June, I saw my parents for the first time since the previous September so I saved some of the samples above to share with my father. We marvelled, in particular, over the extraordinary tropical fruit laden 1977 Brora: what a shame that most buyers will never drink it. But the sample that stood out among such riches wasn’t a whisky. It was a Port.

A very very old Port, the aptly-named Taylor’s Very Old Single Harvest 1896. It’s billed as a ‘single harvest’ Port rather than a ‘vintage’ as it was aged in cask rather than bottle. Traditionally all the excitement in Port revolved around vintage ports which are loved by enthusiasts in the traditional markets in northern Europe, America and especially Britain and Ireland. These are sold young and Port lovers then have to keep them for 20 plus years in their cellars. 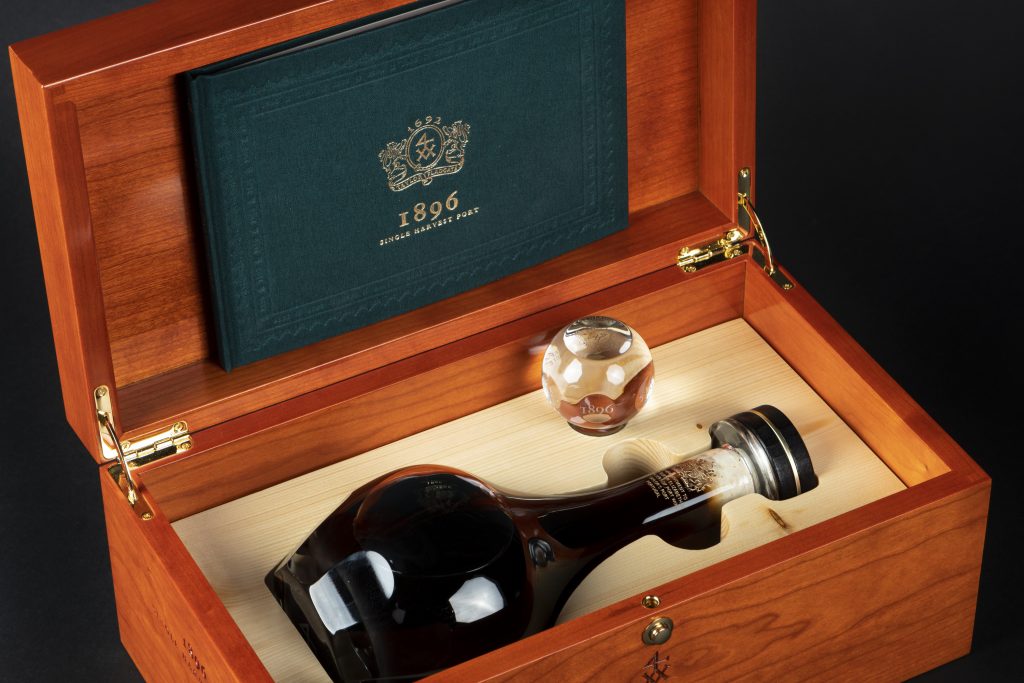 Naturally, the packaging is pretty fancy

The appeal of wood-aged ports

The Portuguese, in contrast, appreciate tawny Ports – long aged in wood where they begin to lose their colour hence the name. These wines are now beginning to be more widely appreciated. Very old casks would previously have been blended into old tawny blends, kept as family treasures to be traded at some point or just drunk by Port producers at their private dinners. Now firms like Taylor’s have woken up to the potential of bottling them on their own as ‘colheitas’ – wood-aged wines from a single vintage.

In 2010, Taylor’s released Scion, an 1855 wine. Then in 2012, the firm acquired a small house of Norwegian heritage called Wiese and Krohn, because of its extraordinary stocks of ageing wines. The 1863 released in 2014 and this year’s 1896 release were all originally laid down by Wiese and Krohn. The latter comes form two pipes that’s all that was left from this famous year. Only 1700 bottles have been filled.

Adrian Bridge, Taylor’s managing director commented: “The launch of a wine as old, valuable and unique as this one occurs only a handful of times in a generation. It is, by its nature, a historic event in its own right, which Taylor’s is proud to share with wine collectors and connoisseurs of rare wines.” He added: “Savouring such a wine is a once in a lifetime experience.”

My sample of the 1896, came in a small test tube. It was a pale reddish brown colour. On opening, the smell just jumps out and fills the room with the heady aromas of balsamic vinegar, furniture polish, nuts and fruit. Tasting it, it’s almost indescribably complex with layers of wood, brazil nuts and, unbelievably, masses of fruit like cooked strawberries and maraschino cherries. It’s not in any way tired or over woody.

Now, naturally, it is very expensive at £3950 a bottle. But compare that with an old whisky and it starts to look like a bargain. Can you imagine what a Macallan or Brora (!) of similar age would cost? Though it’s unlikely that any whisky could survive 125 years in cask and improve. That kind of longevity is only available to a select few liquids – Madeira, Port, certain sweet sherries, and Cognac. Though, top Port expert Richard Mayson thinks that the 1896 may have been ‘refreshed at some point.’

So, in a world of mad prices, sometimes a £4,000 bottle of Port can be good value. For me, the best thing about old wood-aged Ports like the Taylor’s Very Old Single Harvest 1896 is that all the work has been done for you. You don’t have to wait 20 years and then guess when the time might be right to open, there’s no mucking about with dodgy corks, wax and decanters. Just pop open the bottle and satisfaction is guaranteed rather like an old whisky. But at a much more reasonable price.