Kristiane Sherry
No Comments on MoM Loves: The Botanist

For The Botanist Islay Dry Gin, there really is no place like home. We chat with brand ambassador Abi Clephane about foraging, second-hand stills, and cocktail ideas for Mother’s Day.

The crystal-clear water in front of Bruichladdich Distillery is the perfect place to skim stones. Visit on a calm day and you can make the smooth slate-like shingle from the little beach defy physics and bounce off into the blue. If the sun’s shining, you can take a stroll up the road past the distillery, past its barley crop experiments and look back at the water, gleaming teal and azure in the light. This is Islay, and this is the home of The Botanist, a gin with the island at its heart. 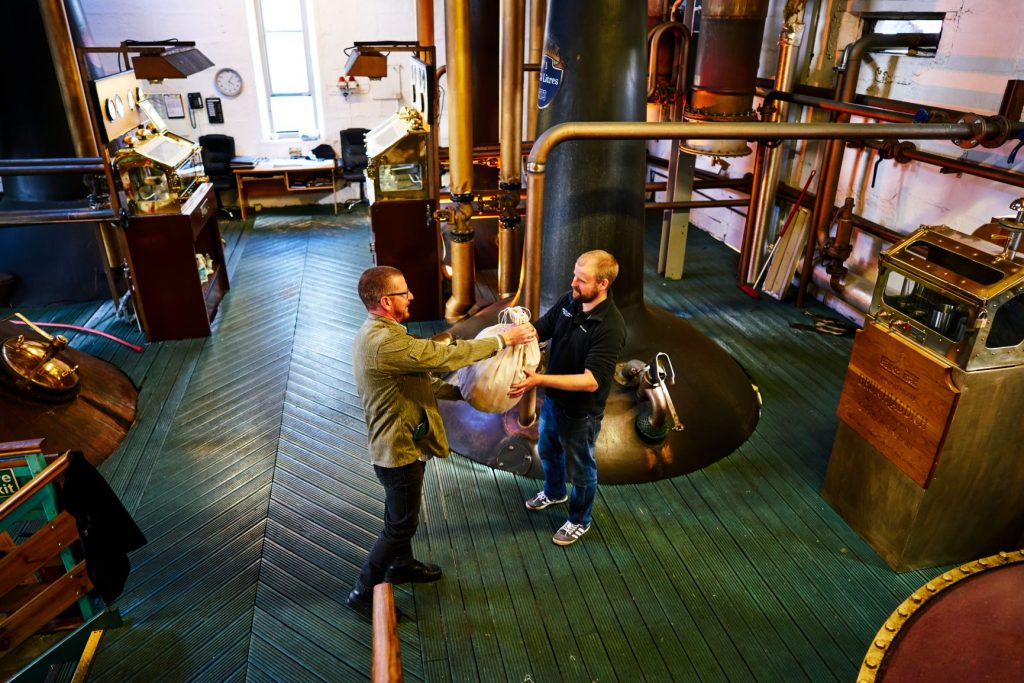 Making The Botanist inside Bruichladdich Distillery

Gin from a whisky distillery

“Jim wanted to reflect the flavour of the island and the terroir,” says The Botanist brand ambassador Abi Clephane when we met via video call. She’s referring to Jim McEwan, the whisky luminary who was the master distiller at Bruichladdich from when it was brought back to life again in 2000 up until 2015. The distillery had spent decades changing ownership, and was eventually closed back in 1994. Once spirit was flowing from the whisky stills, he did something which at the time was quite radical: he decided to make a gin.

Step in Dr. Richard and Mavis Gulliver, the husband and wife duo who helped create the gin’s recipe. He was a plant scientist; she was a headmistress and children’s book author. Together they knew the island like the back of their hands. The pair came up with the 22-botanical recipe that gives The Botanist its signature savoury, earthy character. In addition to the more ‘conventional’ gin botanicals (The Botanist is a London dry style, so there’s a classic juniper-forward vibe), you’ve also got the likes of chamomile, creeping thistle, elder, gorse, and meadowsweet. Each one was selected not only for its flavour, but because it could be sustainably foraged each season, leaving no detrimental impact on the island (on sustainability: Bruichladdich Distillery secured B-Corp status in May 2020, a testament to its commitment in this area). The Gullivers have retired now, but their passion for both plants and Islay has set The Botanist in good stead; today is the main forager James Donaldson and he continues sourcing with the same values expertise. 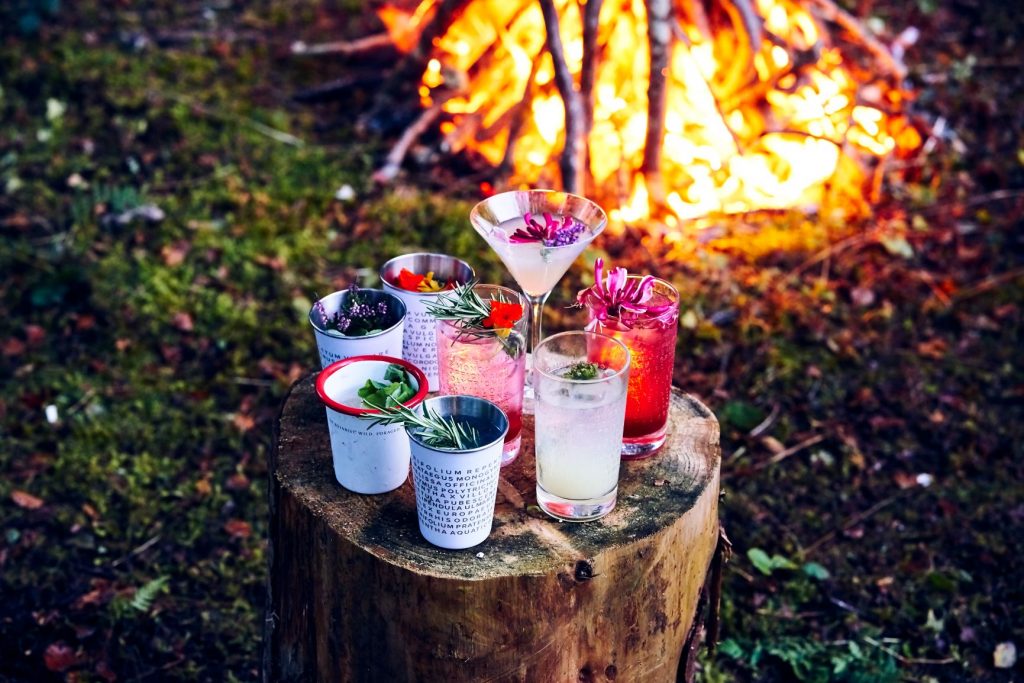 Some lovely foraged cocktails made with The Botanist gin

“Foraging is at the heart of everything we do,” Clephane explained. “Even the still we use sort of came from that.”

Anyone who has visited Bruichladdich and taken a distillery tour will likely recall the still used for The Botanist. And it has a fascinating story of its own. It was found at the now-demolished Inverleven distillery which stood in the Scottish Lowlands until the early 1990s. It was part of the much bigger Dumbarton grain distillery, but itself was never used. It’s a really quirky shape, angular and somehow part cuboid. It’s a Lomond still, the only other of its type in use is up at Scapa Distillery on Orkney. Affectionately known as Ugly Betty, the still was modified with the addition of a carterhead, or a sort of botanical basket. “I call her ‘Frankenstill,” Clephane added with a chuckle.

There are two parts to The Botanist production. First, there’s a maceration of the more traditional gin botanicals in neutral grain spirit. The rest, the island-sourced plants, are placed in the carterhead for a vapour infusion during the distillation process. The spirit comes off at 82% ABV, before being reduced to 42% ABV bottling strength using local spring water. “It’s crystal clear,” Clephane describes, reminiscent of the water in front of the distillery. This is different from the water used in Bruichladdich’s whisky, which comes from a nearby dam. It’s fascinating how different water sources impact flavour, but that’s a discussion for another time. 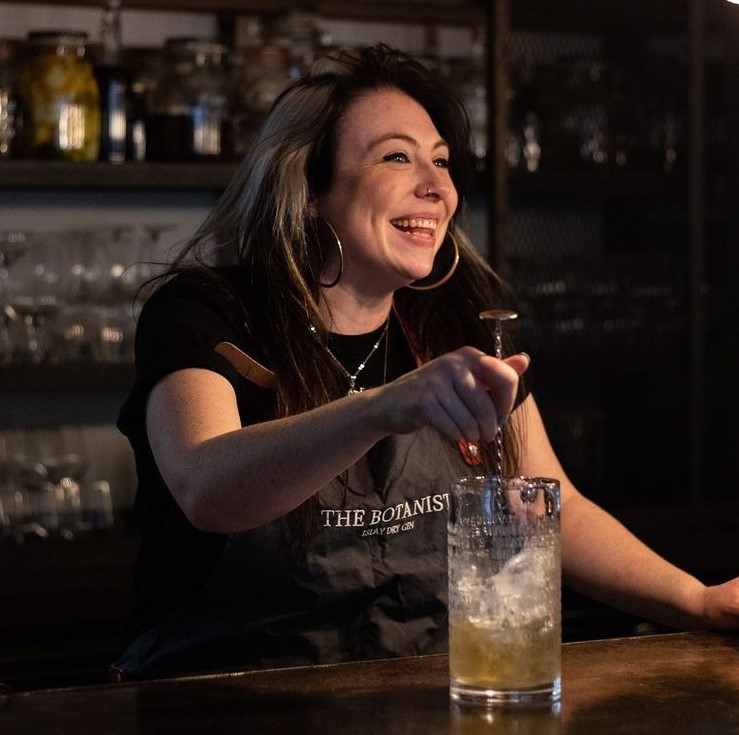 I first tasted The Botanist on Islay. I was in a little pub in Port Ellen, the other side of the island from Bruichladdich. This time it was cold and grey, there was a sharp breeze that blew in bands of rain from the Atlantic. It was not a day for skimming stones.

Instead of a pint, I opted for an ‘Islay G&T’, and it was made with The Botanist. It was crisp, refreshing, and with its green, herbal notes, a welcome respite from some of the sweeter gins that were just coming onto the market. This must have been six years ago, and it’s become a firm personal favourite.

“We don’t have a signature serve; we just encourage people to do what they want,” Clephane says, when I ask her about recommended cocktail recipes. And it’s true: there’s no need to get fussy with this gin. But if you are feeling inspired (and with Mother’s Day coming up, why not get a little bit decadent for yourself or your mum), here are some of her ideas. 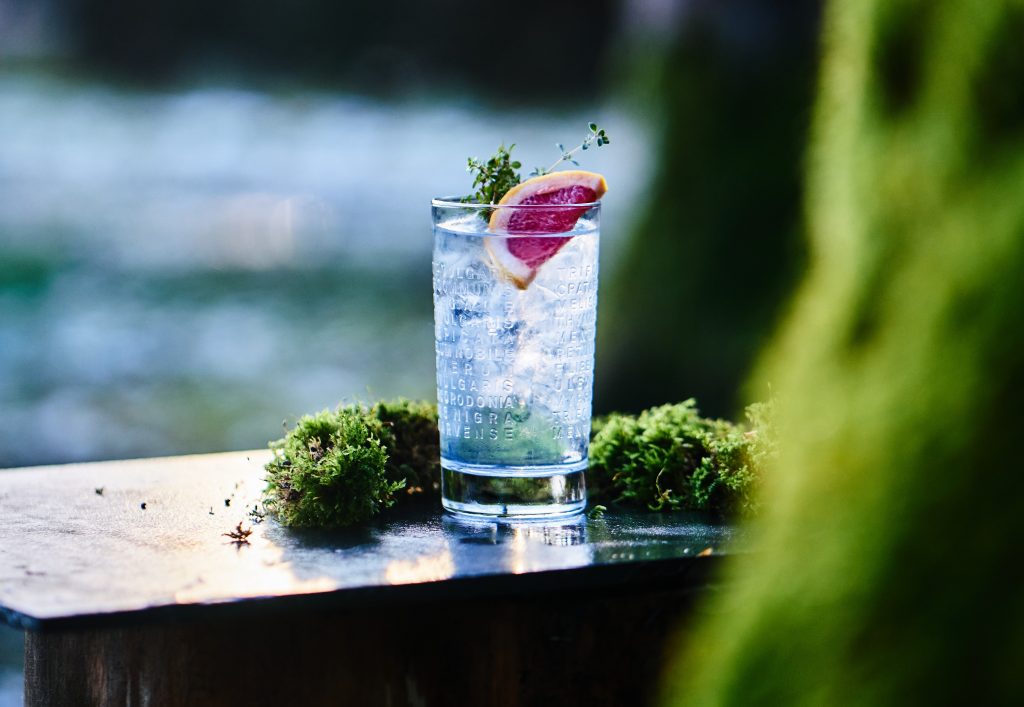 Add ingredients to a ice-filled Highball glass. Stir and garnish with a piece of grapefruit and sprig of thyme.

Build in an ice-filled highball, give a good mix and then top with soda. Garnish with lemon zest

Stir over ice and strain into and frozen/chilled coupe

Shake the gin, lemon juice and honey with ice in a shaker, double-strain into a tumbler filled with crushed ice. Drizzle Aelder liqueur on the top and garnish with a bramble that you have foraged yourself.