We’re auctioning the final and oldest releases in two legendary ranges: Bowmore Black 50 Year Old 1964 – The Last Cask and The Macallan in Lalique 65 Year Old – Peerless Spirit with everything over RRP donated to our nominated charity Malaria No More UK.

Following the Buffalo Trace Antique Collection auctions (which raised well over £4k for an excellent cause) and another update to our auction system, it’s time for our first charity auctions of 2017! And, well, just look at the extraordinary, once-in-a-lifetime bottles we have available.

All times in BST (GMT+1), with all the action taking place on the product pages:

Everything raised over RRP (net of any applicable VAT) will be donated to the charity Malaria No More UK and will support their inspiring work to help protect literally millions of children and their families against a preventable and treatable disease.*

As we only have one bottle of each, there will not be any bottles available for lottery (with our usual message added to the back label) nor 3cl drams. If you’re not familiar with our charity auctions or lotteries then we encourage you to head over to this post for much more on our reasoning behind doing any of this.

About these historic single malt whiskies

Firstly, the last rediscovered cask of legendary 1964 Black Bowmore, and then the final release in The Macallan‘s Six Pillars Collection in Lalique decanters. These are two of the most sought-after whiskies in the world and were aged for at least 50 years and 65 years respectively, making them some of the oldest too.

Distilled on 5th November 1964, the Bowmore Black spent over five decades maturing in the Islay distillery’s celebrated No.1 vaults. Initially filled into two first-fill Oloroso Sherry hogsheads (casks 3708 & 3714), they were later married together within just the one and returned to a cool and quiet corner of the famous warehouse on the shore. Incredibly, this historic cask was somehow forgotten about before being rediscovered recently to understandable excitement and clamour!

Palate: After 50 years maturing in Bowmore’s legendary No.1 Vaults, Black Bowmore 50 Year Old, The Last Cask To Be Rediscovered has developed a sublime elegance on the palate to reveal notes of tropical fruit including mango, papaya and pineapple as well as honeyed black truffle.

“One of the world’s most coveted liquids…”

Just as Bowmore’s legendary Black series has excited enthusiasts and collectors of old and rare whiskies for years (the first four being released between 1993 and 2007), so too have The Macallan in Laliques. The Six Pillars Collection began in 2005 and has seen astonishing 50, 55, 57, 60 and 62 year old releases before this truly extraordinary 65 year old. Appropriately, Lalique have pulled out all the stops with their bespoke crystal decanter. René Lalique’s blown-and-pinched technique has been used to produce a stunning vessel inspired by the finest perfume bottles of the 20th century.


“It represents a lifetime of whiskymaking…”

Best of luck in the auction everybody and remember: the higher you bid, the more money will go to Malaria No More UK and their tireless work fighting this deadly yet preventable disease.


* For more about why we’ve chosen this charity take a look at this post on 1897 Quinine Gin, plus the results of not just the important work they do with education, nets and treatment, but also by leveraging government policy in this article.

Master of Malt @MasterOfMalt
34 minutes ago
Remember there's also a #WhiskySanta Super Wish opportunity this week: get your wishes in for a stellar bottle of @GlenfiddichSMW 40 Year Old worth over £3,250 before this Friday!
https://t.co/hsR2ucYgM3 https://t.co/7AZqS50Zra
View on Twitter
1
10

Master of Malt @MasterOfMalt
37 minutes ago
Keep those wishes coming as #WhiskySanta will be back tomorrow to grant even more! He's also busier than ever adding tens of thousands of extra gifts in lucky Master of Malt orders!
https://t.co/AitexLiYeu
View on Twitter
0
3

Master of Malt @MasterOfMalt
38 minutes ago
Congratulations to Helen Sproule on Instagram, #WhiskySanta has granted their wish so we're sending them a bottle of Delord 1989 Bas-Armagnac! 🥃🎅 https://t.co/kHKg5hQ5iF
View on Twitter 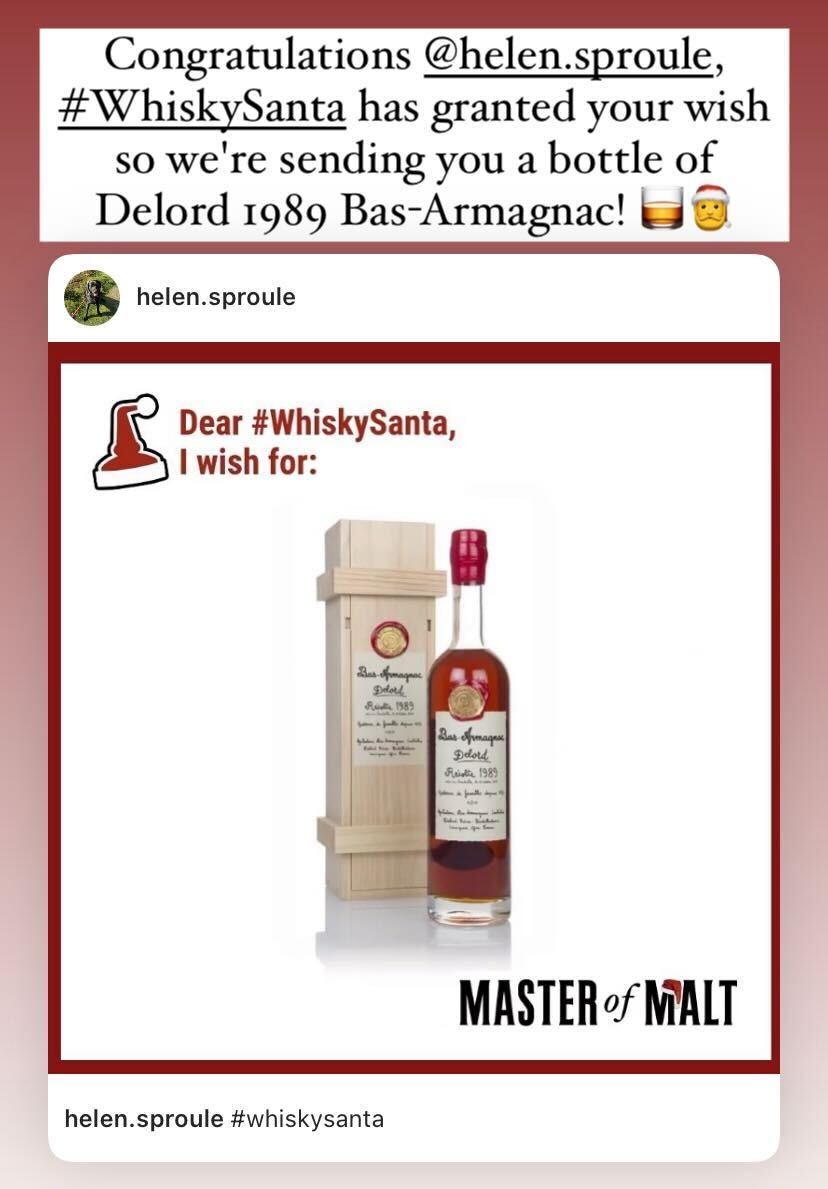 The Result of Battle of the Blends Challenge No. 2!