We finally have an answer. Historical documentary evidence has provided us with proof. Or as much proof as we can get. Scotch whisky now has an oldest distillery!

It’s a question you’ve probably asked yourself (or let’s face it, straight up Googled) before. Which distillery holds the claim to be Scotland’s oldest? There hasn’t previously been a conclusive answer, and the debate has gone on for so long it could be the oldest argument in Scotch whisky.

Now, thanks to fresh evidence unearthed from archives, we may finally have an answer: Littlemill Distillery. 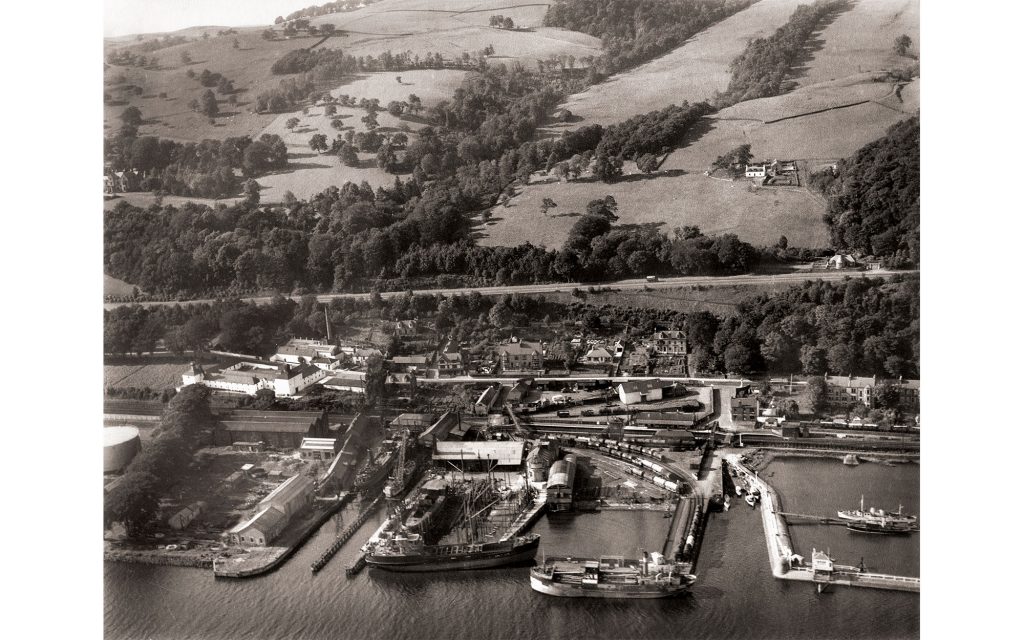 Littlemill Distillery from above, in the good ol’ days.

Rumours that Littlemill is Scotland’s oldest distillery, possibly even the oldest in the world, have long persisted. It was hard to say for certain if this was true, despite the distillery’s extensive and fascinating history.

The Littlemill Distillery was established in 1772 on the banks of the River Clyde near Glasgow, on the site of an old brewery that was founded during the 14th century. There are suggestions that illicit distilling took place there from 1750 when the site was bought by George Buchanan, a malt master. Renowned whisky historian and writer Misako Udo in her book The Scotch Whisky Distilleries even suggested that distilling may have happened there many centuries before.

But it was a date stone carved with ‘1772’ on the gable end of one of the distillery’s warehouses that offered the best clue as to the age of this Lowland distillery for over 220 years. That was until Loch Lomond Group, the current owner of the Littlemill brand, commissioned a study of Littlemill’s origins. Behold – new evidence has come to light! 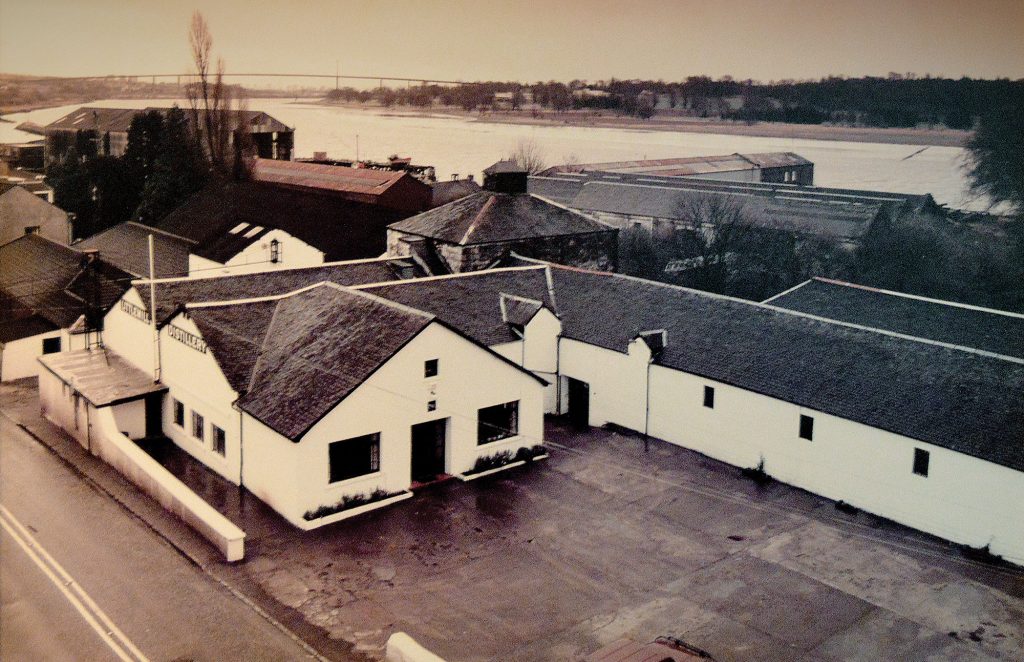 The Littlemill distillery, shortly before it was sadly closed

The research uncovered the local Justice of the Peace’s records for Dumbarton, dated 2 November 1773, which stated that ‘Robert Muir of Littlemiln’ was granted the first-ever license by the Government of King George III to “retail ale, beer and other excisable Liquors”.

That’s not all. In 1772 accommodation was built next door to the distillery to house the Excise officers who represented the King. This measure ensured any distillation was duly recorded and the relevant taxes calculated and paid. There would not have been an excise officer on site had the distillery not been licensed to operate.

This suggests that something was already afoot onsite before 1772, and could well make Littlemill the oldest licensed distillery in Scotland. The distillery is sadly no longer in operation after it fell into perpetual silence in 1994 and was subsequently destroyed by fire in 2004. 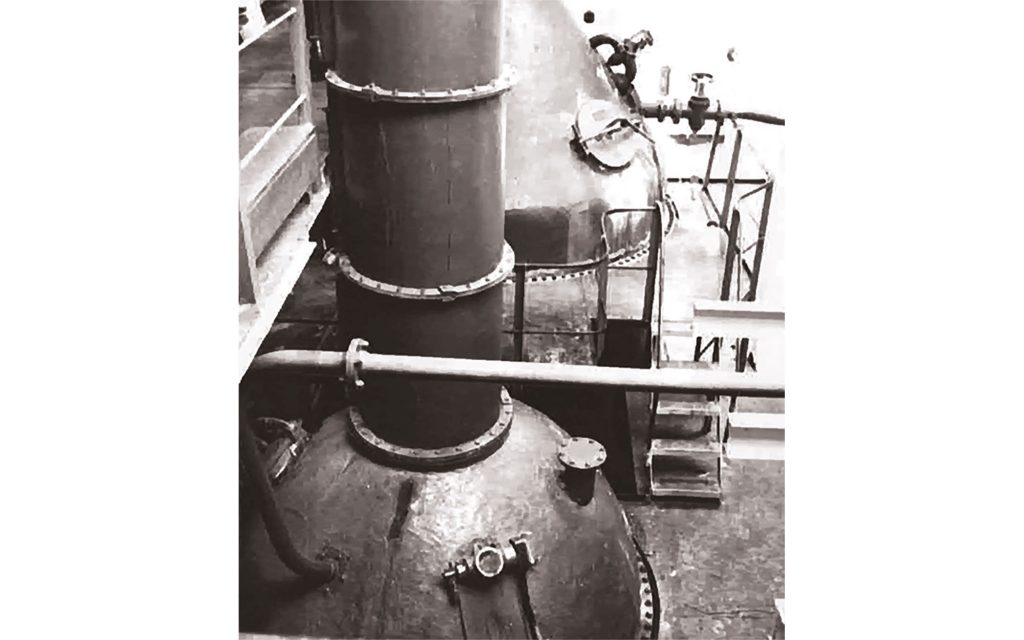 The original Thomas stills at the Littlemill Distillery

“It has often been rumoured that Littlemill was the oldest licensed distillery in Scotland, which until now have been only rumours,” said Colin Matthews, CEO of Loch Lomond Group.

“We have now uncovered conclusive documentary evidence to confirm these rumours and claims as reality, having commissioned detailed research to establish the facts. We are thrilled and excited to have discovered these clear and unambiguous documents dating back to 1773 that confirms that Littlemill was indeed the very first Scottish distillery to obtain a licence to sell ‘excisable liquors’.”

Charles MacLean, whisky historian and author, added: “The wrangle about ‘the oldest distillery’ has been running for ages, so this is a significant find. There have been several claims before, based on the fact that illicit distilling took place on the site prior to a license being granted. The Dumbarton Justice of the Peace records, referencing Littlemill, does not refer explicitly to distilling, since prior to 1781 private distilling was perfectly legal so long as the spirits were not offered for sale. So, this license to sell excisable liquors amounted to a license to distil as we understand it today. What a shame Littlemill itself burnt down in 2004, but thankfully some limited stocks remain!”

It’s good of MacLean to look on the bright side, and we’ll join him there ourselves. While it’s true another drop won’t be produced, the remaining stocks from Littlemill continue to be released by Loch Lomond Group. 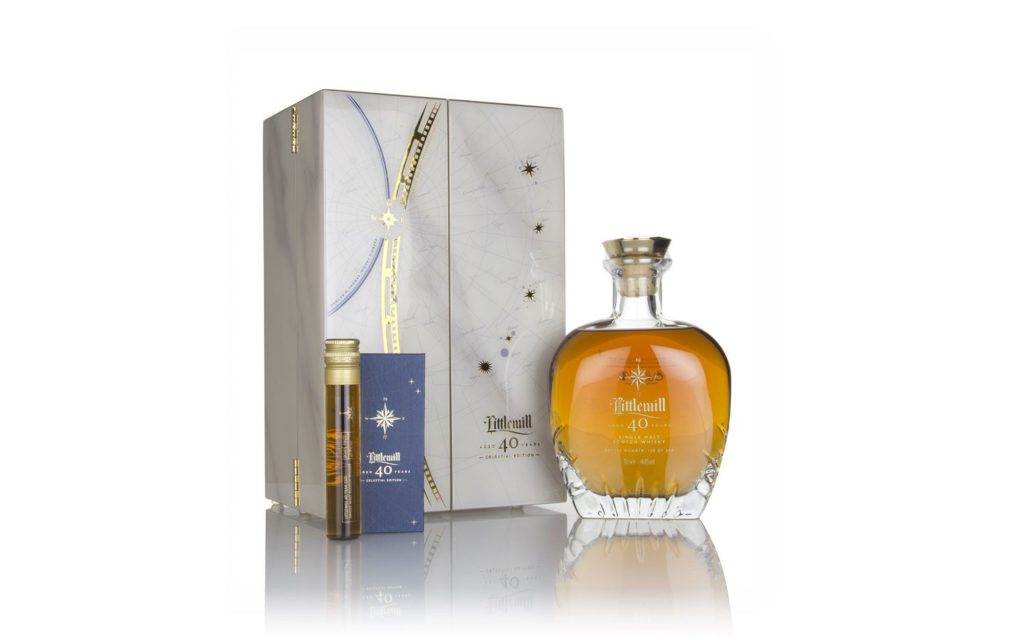 In late 2018 the brand launched the Littlemill 40 Year Old Celestial Edition, the oldest expression ever to be released from the lost distillery and a celebration of the life’s work of former Littlemill owner Duncan Thomas. His innovative take on the distillery’s stills helped create three styles of single malts from full-bodied to light (seen in the above photo).

The latest addition to the Littlemill range will be released in September 2019. The third release from the Private Cellar Collection, Littlemill 29-year-old will be housed in a Glencairn crystal decanter etched with an illustration of the River Clyde and a silver star signifying the Littlemill distillery’s location. The whisky will be accompanied by a 5cl miniature of the liquid, a piece of an original Littlemill cask, and a booklet sharing the fascinating history of the Littlemill distillery along with tasting notes from Master Distiller Michael Henry. It sounds delightful, but there will only be 600 bottles released across the world, so you’ll need to be quick. You have been warned.

If you do manage to get your hands on a bottle, be sure to boast that it’s from Scotland’s oldest licensed distillery.

Master of Malt @MasterOfMalt
9 hours ago
Read up on this year's spirit sales trends in @DrinksRetailing News! Whisky is doing well, and we've recorded big increases in the Tequila and rum categories, with some superb single cask bottlings, and high-end releases hitting the market.
https://t.co/eyxBPVWGOJ
View on Twitter
2
7

Master of Malt @MasterOfMalt
10 hours ago
Do you want a bit more sherry in your Black Label? Then Johnnie Walker has just the whisky for you: @johnniewalker_ Black Label Sherry Cask Finish.

Master of Malt @MasterOfMalt
13 hours ago
An advent calendar filled with gin seems like the perfect way for a gin enthusiast to count down to Christmas, and this article in @hellomag rounds up eight of the best this year has to offer.
https://t.co/3v2A5iS7ow
View on Twitter
0
0