This International Women’s Day we’re celebrating the women behind the drinks you love. Today, we have Kirstin Neil young who plays a vital role as a coppersmith, building and repairing the stills that make Scotch whisky possible.

Kirstin Neil is only the second ever coppersmith to be employed by Diageo. Though she doesn’t come from a whisky background, her father’s profession as a welder-fabricator influenced her choice of job. “I always knew that I wasn’t really one to be working at a desk. I like to be on my feet and working with my hands,” she said, “it was a nice eye-opener to see the things that can be created working with your hands in welding and fabricating.” 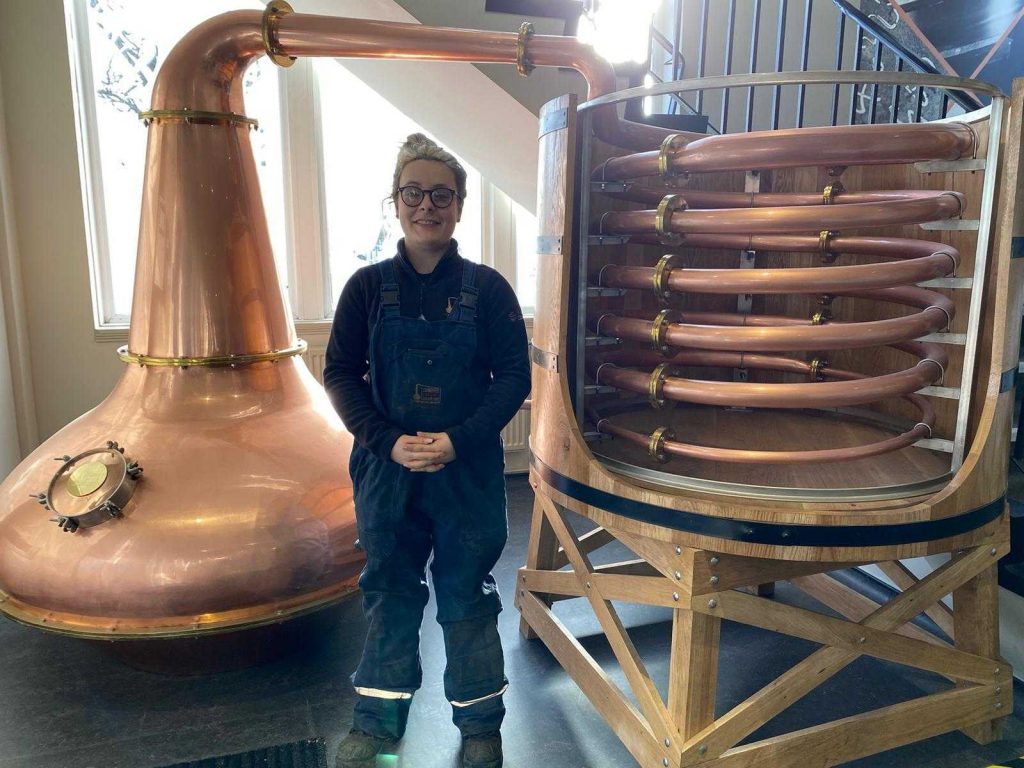 Initially she was training to be a hairdresser when she met a friend who worked at Diageo’s Abercrombie works in Alloa, just outside her home town of Falkirk in Scotland’s central belt. She loved the sound of the job: “you’re making everything handmade from flat sheets of copper.” What particularly appealed was that “something you’ve created with your own hands” would make a product that was enjoyed all over the world. So hairdressing’s loss was whisky’s gain.

Neil had already done a year welding and fabricating in college which set her in good stead when she began her apprenticeship. “My manager Charlie King looked into that and when he phoned me to tell me I had the job, he also discussed with me starting as a second year,” she said. It normally takes four years to train, but Neil will do it in three, so she has 18 months left until she’s fully qualified.

The work is very varied (see video below for an insight into what goes on at Abercrombie). An average day might consist of making new pieces such as a lyne arm, condenser or swan neck by hand in the workshop made with measurements obtained at the distillery. Or she might be visiting a distillery itself to patch stills that have worn. She explained: “Recently, I was working over on Islay and we were replacing the side sheets on a still. So we actually rolled them in the workshop, in Alloa, and we had to transport them across on a ferry to Islay. We had to then build them up on site, because we wouldn’t have been able to get it on the ferry.”

Perks of the job

While on Islay, she picked up a taste for Caol Ila 12 year old. Well, it is one of the perks of the job. She’s also a fan of Glenkinchie and Ben Nevis. “I do like a wee dram out of the bottles every now and again,” she said.

Neil is following in the footsteps of Rebecca Weir, the first ever coppermith at Diageo. “That was amazing for her to break that barrier and be the first female coppersmith and I feel just as privileged to be the second female coppersmith. I hope that other female coppersmiths join the career path”. She clearly loves the camaraderie of the job. “Everybody has been very supportive. I’ve not come across any sexism. It’s a great place to work and to be part of a team. I was accepted into the team from day one”.

According to Neil, her father was initially a little sceptical at first, “because I’m quite short so I think he was kind of worried about the bigger jobs. But he’s really proud of me and so is my mother,” she said. Now, many of her friends are now interested in getting similar jobs: “Why should it be a man’s job? Women can do the same tasks as men can do”, she said. Why not, indeed.

A day in the life of a whisky archivist