How to get the best out of overproof spirits

From barrel proof bourbon to navy strength gin, it’s hard to know how – and when – to use punchy overproof spirits in cocktails and mixed drinks. Here, we explain the different ways you can incorporate these high-octane sippers into your cocktail repertoire without overpowering your palate (or doing yourself a mischief)…

Before we get into the spirits, let’s tackle the etymology of overproof. The term was coined in the 18th century, when sailors would mix their spirits with gunpowder and light it with a match. If the booze caught alight and burned steadily, it was ‘proof’ the spirit was of adequate strength and hadn’t been watered down. They were often paid partially in alcohol rations, and after all, no one likes being short-changed. 100% proof corresponds to around 57% ABV in new money.

We may no longer feel the need to set our spirits on fire before accepting a booze delivery, to the relief of postmen and women everywhere. But potency pyrotechnics aside, our obsession with ABV remains otherwise unchanged since the 18th century. Whether we’re sipping cask strength Cognac, overproof rum, or navy strength gin – or exploring the emerging no- and low-alcohol category – the potency of booze remains a key talking point among drinkers, distillers and bartenders to this day. 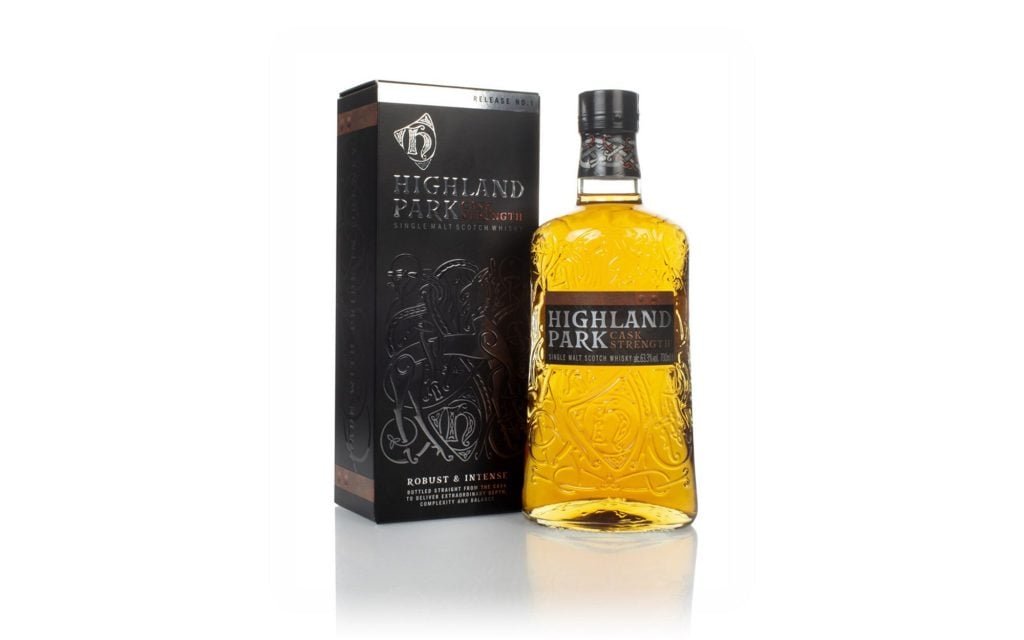 The just-released Highland Park Cask Strength was bottled at a mighty 63.3% ABV

The vast majority of our favourite spirits are diluted with water before they’re bottled, settling somewhere around 40% ABV. This isn’t necessarily a negative – if you have a preference for cask strength Scotch, there’s a solid case for diluting the dram with a touch of water before you drink it – but it does mean boozier bottlings, typically from 50% ABV upwards, are fewer in number. Beyond upping the alcohol content in the bottle, less dilution with water means a greater concentration of esters, fusel oils and other compounds – collectively known as congeners – in the final spirit, which carry through as flavour and complexity.

Not only does a great overproof spirit bring flavour by the bucketload, but it also makes the other flavours in the drink “more concentrated and intense”, says Georgi Radev, owner of London bar Laki Kane. “When you add high-ABV spirit to a cocktail, you are adding more flavour and viscosity to it,” he says. Up to a point, of course. Overproof spirits are notoriously difficult to enjoy neat, and can be extremely challenging to work into short cocktails, “because the high volume alcohol numbs our taste buds, so we can feel only the strength of the alcohol,” he says. “The flavours are there, but we can’t enjoy them.”

However, overproof spirits are perfect for “long drinks with more ingredients using multiple strong syrups,” says Radev, with “Tiki-style tropical cocktails,” being a prime example. For example, the Piña Colada. “Overproof rum makes a perfect Piña Colada,” he says. “The cream balances the high alcohol content. In a normal Piña Colada, the rum is almost undetectable. The main flavours are pineapple and coconut. With overproof rum, it’s a different game.” These kinds of drinks need flavourful spirits to stand out, and they’re one of the few circumstances where such powerful sippers ought to be used as a base. 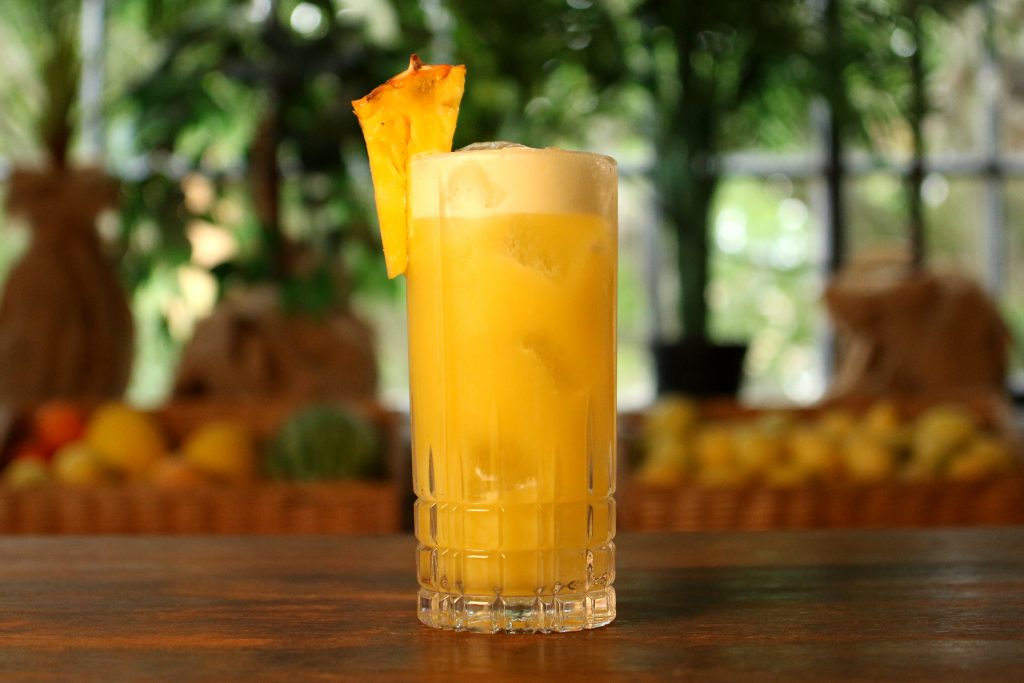 The Piña Colada tastes even better when made with overproof rum

If you’re set on shorter drinks, though, you don’t necessarily have to steer clear of overproof spirits. You can use such tipples as a modifier by incorporating a little into the body of the recipe, rinsing the glass before you pour, or floating a small amount on top of the finished cocktail. Adding just a few meagre millilitres will turbocharge the flavours in the drink and also add texture, as Radev alluded to earlier when he mentioned viscosity. A higher ABV cuts through citrus and syrups to bring a rich, almost oily mouthfeel to a cocktail that’s near-impossible to replicate with any other ingredient (just ask any lab-weary alcohol-free producer).

Indeed, the difference a handful of extra ABV percentage points can make, even to the same spirit, is fascinating. “On a trip to Guatemala I was introduced to an aged rum that was 46% ABV, in comparison to its regular counterpart at 40% ABV, and it completely transformed the experience,” says James Shearer, global beverage director for London restaurants Oblix, Zuma and Roka. “In my opinion, a higher ABV is the distiller’s way of perfecting the product for the drinker.”

However, what overproof giveth, poor bar technique taketh away. In exchange for flavour by the bucketload and money-can’t-buy mouthfeel, you have the challenge of adapting your drink to accommodate the extra punchiness. Overproof spirits – especially at the higher end of the ABV spectrum – redefine the character of a cocktail, so it’s not just as simple as subbing your usual gin choice for a Navy strength sipper. You’ll likely need to rethink the proportions of the drink, and potentially your ingredients. For example, if you’re making a Manhattan with barrel proof rye whiskey, choose a robust, powerful vermouth to pair with it and drop the pour size of both. 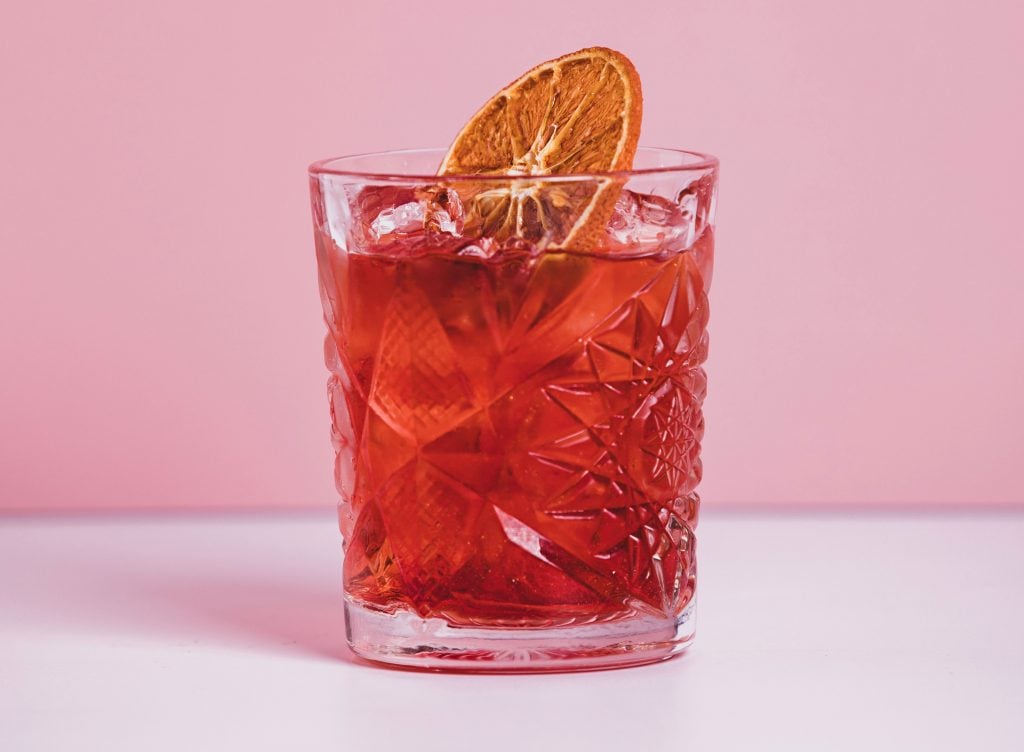 A Negroni is a great foil for navy strength gin

If you’re stuck for classic recipe recommendations, Shearer recommends balancing navy strength gin in a Negroni, “to bring out the citrus and bitter notes”. Overproof Tequila “can add a slap of flavour to a Zombie,” he says, while high-strength Cognac works well when utilised with overproof rum in a Between the Sheets. Overproof rum shines in a Nuclear Banana Daiquiri or classic Mai Tai, and cask strength whisk(e)y goes down a treat in a Prescription Sazerac.

With a bit of planning, overproof booze is nothing to shy away from, providing you treat it carefully and use a delicate hand. “You need to start working with overproof spirits to get to understand them,” says Radev. “Most people think that overproof is mainly for lighting up cocktails, but it’s so much more than that. Start using it in drinks and you will grow to love it.”