With the capital’s venues tentatively opening up again on the 4 July, we thought it as good a time as any to celebrate some of our favourite places in London to drink whisky.

It’s happening, it’s finally happening! Soon, when you want to have a drink with a friend it won’t mean dropped connections and unflattering camera angles on Zoom, or sitting two metres apart in your garden wondering whether using the loo would break government guidelines on social distancing. No, we’re talking about sitting at a table under a roof while someone brings you a drink, and then you pay for it. Sounds bananas, but it could catch on. So, we’ve rounded up five of our favourite places to drink whisky. Where we know, we’ve put when the venue will be opening again and whether booking is required. Please do contact the bar first though. Right, without further ado, here they are. Let us know about your favourites in the comments or on social media. 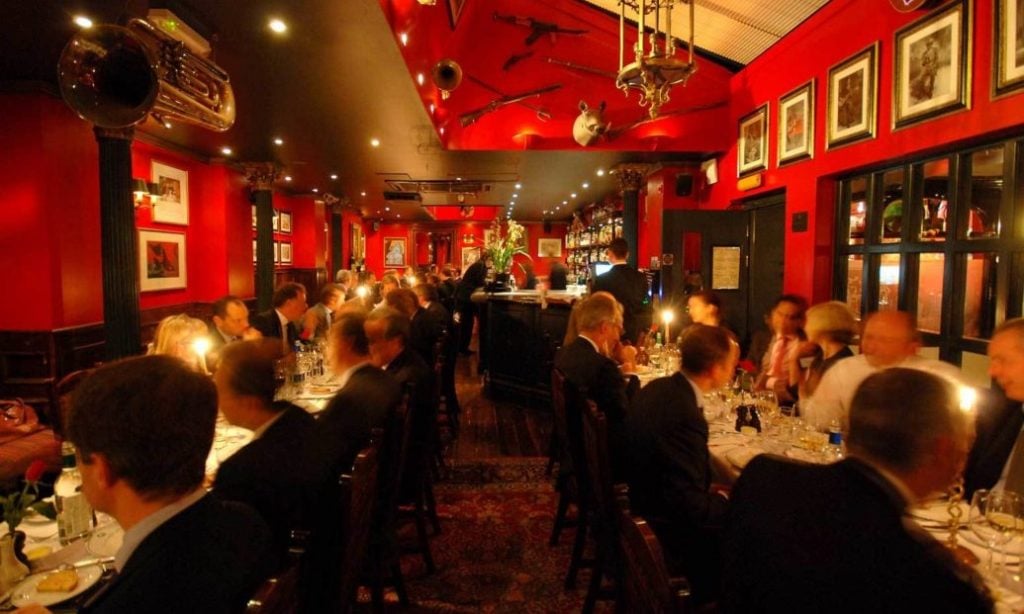 Almost every day, Boisdale owner, the magnificently-monickered Ranald Macdonald, is to be found enjoying lunch in the Belgravia branch. Always a good sign. This first Boisdale specialising in Macdonald’s three favourite things steak, cigars and whisky, opened in 1988, and has since been joined by three other venues, Mayfair, Bishopsgate and a mammoth venue at Canary Wharf. Macdonald also loves music and so there are regular jazz, soul and reggae gigs with some serious talent on offer like Courtney Pine or Horace Andy. The Mayfair branch has a special vinyl and cocktail bar in the basement whereas in Belgravia you can indulge your inner plutocrat on the cigar terrace where Glen Collins will suggest the perfect malt to go with your Montecristo. During lockdown, MacDonald has kept the wolf from the door issuing Boisdale War Bonds where one can buy fine whisky, wine, food and music in advance at a massive discount. The Belgravia branch will open from 8 July. 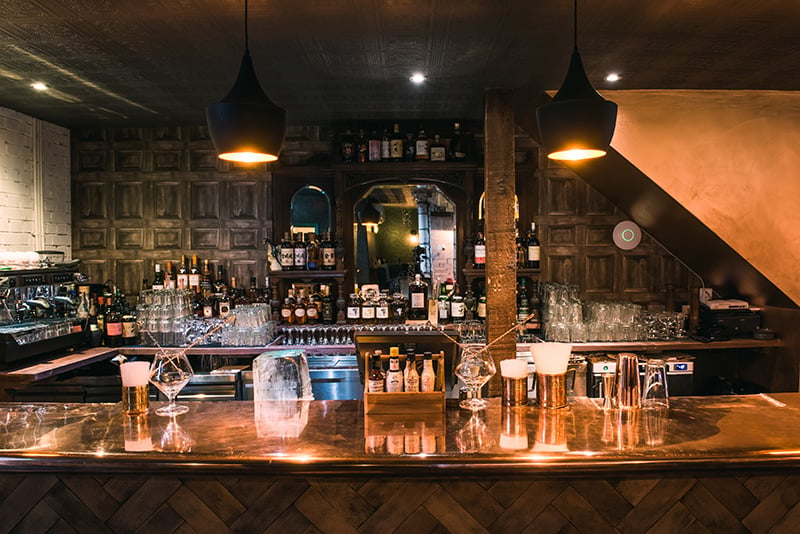 Bull in a China Shop, Shoreditch

This amazing bar in London by Old Street roundabout is a booze wonderland especially for lovers of Japanese whisky. It was founded by brothers Simon and Stephen Chan who created the Drunken Monkey dim sum bar also in Shoreditch. Bull in a China Shop has been open since 2015, and offers an incredible range of Japanese whisky including some Karuizawa at £55 a glass and the biggest bottle of Nikka from the Barrel you have ever seen, plus whiskies from smaller producers like Mars. There’s plenty of Scotch too. Stephen Chan told me he had a soft spot for Tomatin, in particular. There’s Japanese, Taiwanese and Korean bar snacks to wash down with your single malt. 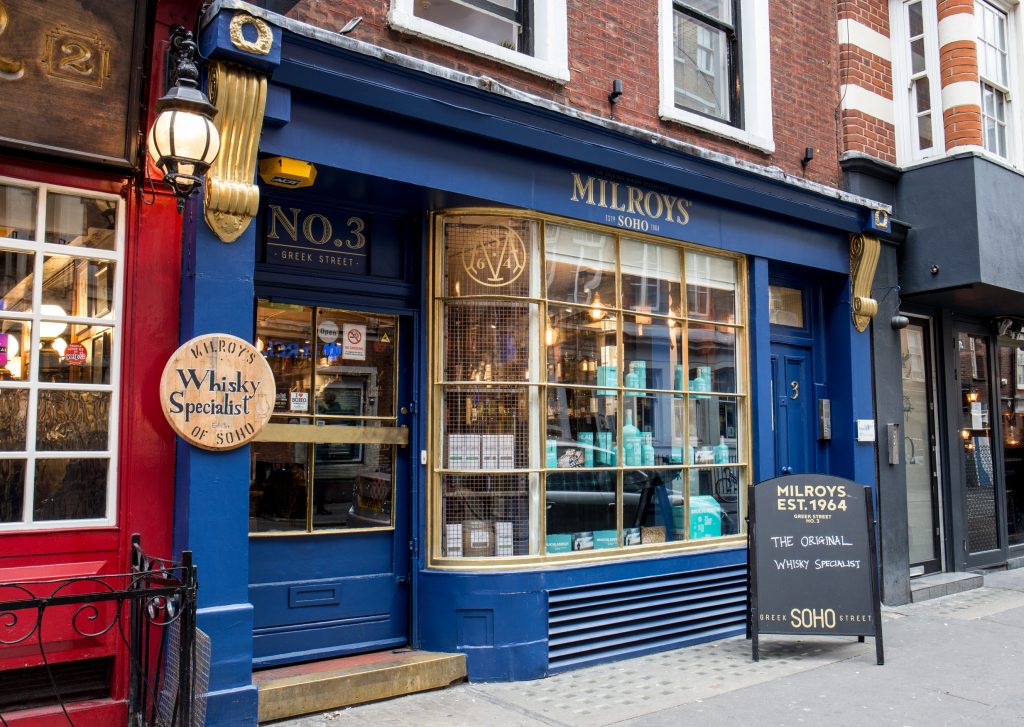 Milroy’s has been a whisky destination since the ’60s

Milroy’s is a Soho institution that was revived and revitalised when Martyn ‘Simo’ Simpson took over in 2014. There’s a cocktail bar in the basement and a whisky bar on the ground floor with over 1,000 bottles to try; they claim it’s the largest selection outside Scotland. Simo buys and bottles his own rare casks so there are things here that you can’t find anywhere else. During lockdown, the team kept busy by selling rare casks, offering Zoom tastings and selling bottled cocktails. “We will come out of this stronger than we went in,” he said.  He opened a three story Spitalfields outpost last year which contains a whisky-focused private members club. This will be selling drams to take away while the Soho branch will open up next week with seating at the whisky bar and 16 tables outside as part of Soho’s evening pedestrianisation transformation. He’s taking the opening slowly “we’ll be fully open in September, no one is going to rush back to central London yet.”

Homeboy, a little bit of Ireland in North London

The aim with Homeboy was to bring a bit of Dublin to Islington, according to founders Aaron Wall and Ciaran Smith. As you’d expect there’s a remarkably range of Irish whiskeys alongside some excellent cocktails along with simple food like toasties or, sure to bring back childhood memories, a crisp sandwich made with Tayto’s cheese and onion. One of London’s smallest bars, it will be reopening on 4 July; Wall told us: “we are just doing table service and blocking off every second table for distancing. We are happy to take walks too and also takeaway. Bookings have been really good for Saturday but really quiet for after that.” Wall has kept busy experimenting with Home Boy Irish Coffee Bitters (why has no one done this before?), which should be coming soon, bottled cocktails and “our own limited release top secret finished Irish Whiskey.” Sounds exciting. 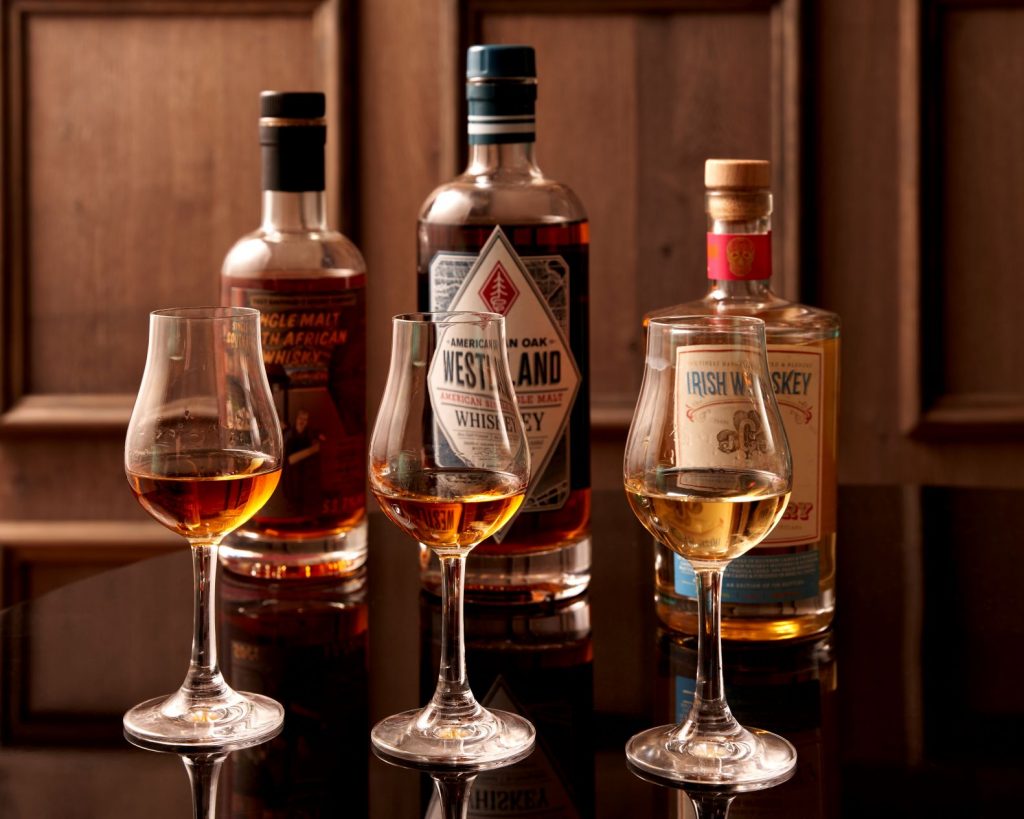 We love a bit of theatre here at Master of Malt, and there’s theatre a-plenty at the secret Sibin bar at the recently-opened Great Scotland Yard Hotel. It was so secret that we struggled to find it until a helpful member of staff pressed a discreet button and, James Bond villain-style, a section of bookcase opened to reveal a secret bar. It’s called Sibín, as in an Irish drinking den (sometimes spelt shebeen). The drinks menu takes a turn for the unexpected too with old classics given a tune-up. The Rusty Nail is made with two types of Talisker, and Drambuie, and then left to oxidise for two days to mellow. Bars manager Michal Mariarz adds a little PX to his Smokey Cokey, Lagavulin 16 year old and Coke. For the more classically-inclined there are unusual whiskies like a 2005 Caol Ila part-matured in Hermitage red wine casks. Please note, opening date for Sibin is still TBC.