Tannic and full-bodied like red wine, aromatised like vermouth, Nine Elms No.18 is the first in a range of alcohol-free drinks specifically designed to complement good food. Here, we speak to co-founder Simon Rucker to find out the story behind his game-changing creation…

Nine Elms No.18 is unlike any other low-and-no alcohol option on the market, having been developed specifically to complement gastronomy. Initially modelled on the characteristics of wine – “acidity, tannins, fruit, flavour, body, length; the retronasal smell,” says co-founder Simon Rucker – it has evolved into a wine-vermouth hybrid that’s delightful served as a straight pour, stirred into a cocktail, or simply enjoyed with a splash of tonic, ice and a slice of citrus.

You might not know Rucker’s name, but you’ll likely recognise his work. A product designer by training, he’s designed shoes for Paul Smith and Caterpillar, worked on the Ford Fiesta, shaped Diageo’s provenance-led approach to Guinness, and helped transform Samsung into the premium consumer electronics brand it is today. “I had some ability to spot trends and understand what they meant in terms of changing consumer needs,” Rucker says. “And because I was a product designer, I was also able to conceive what the new products that would fit into that demand space would be.”

His biggest and lengthiest project came about when the company Rucker worked for was asked to “solve the smoking problem”. He spent almost 15 years working on e-cigarettes – and e-cigarette-type products – and became fascinated by the “supertanker of death” tobacco industry. It was there he met future business partner Zoltan Szucs-Farkas, who was head of strategy and insights at British American Tobacco. “We bonded on this interest in, ‘How do you turn around a massive supertanker of death like the cigarette industry and deviate it to something more sustainable?’,” he says.

It was in a corporate dining room on the eighth floor of British American Tobacco’s vast London office building where the duo first identified the need for a non-alcoholic drink designed for upscale dining. The tobacco company was among the first to frown upon boozy business meetings and banned alcohol outright early on, so lunch and dinner guests were offered cans of Diet Coke and bottles of J2O instead. “It was incongruous,” says Rucker. “It’s a bit like going to a fine dining restaurant and eating with a plastic fork. The conversation came up between us, ‘Why isn’t there anything that fits in this space?’, but it was always just out of intellectual interest. There was no, ‘What if…?’.” 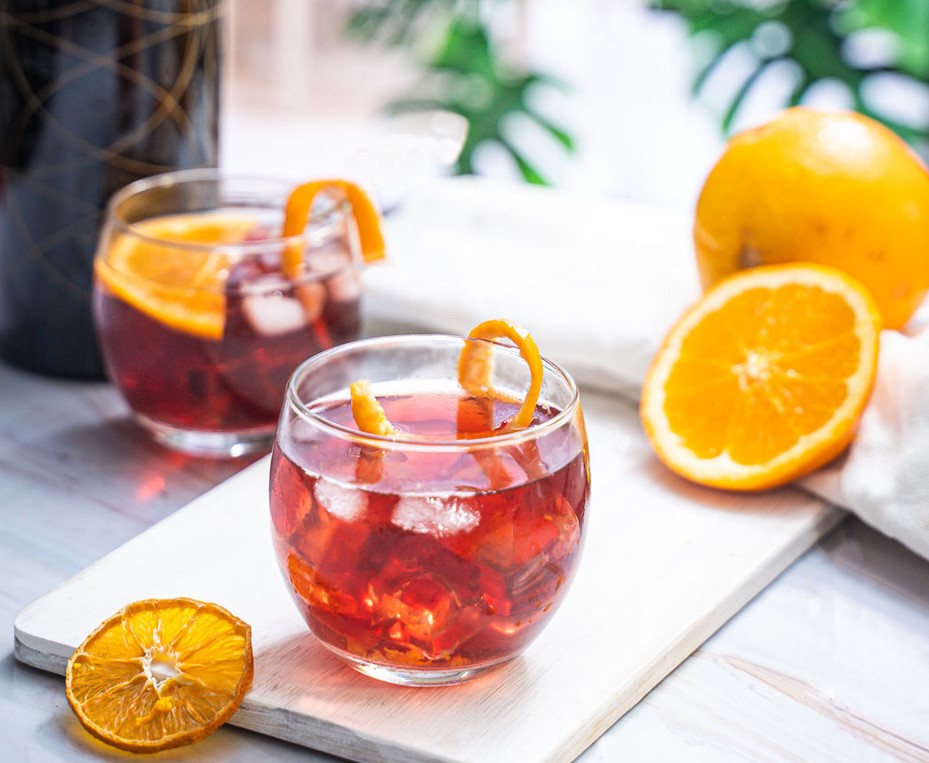 The ‘what if?’ would come five years later, when Rucker and Szucs-Farkas – working for different companies and ready for a career change – met for lunch in Shoreditch one afternoon. “We were both at a stage of our lives, middle-aged white men – the classic ‘male, pale and stale’ – slightly jaundiced by 20 to 30 years of suckling from the corporate teat, but with a bit of money in the bank,” he says. “Normally I’d have a glass of wine or two if we had lunch, but Zoltan couldn’t because he had a client call, and the conversation popped up again. We decided to go for it.”

Motivated by the concept of “a non-wine product that behaved like wine”, they spent 18 months talking with universities about the intricacies of hydrocolloids (gums that stop drinks from separating) and liaising with drinks innovation specialists who were hell-bent on creating a slightly fancier version of Shloer (a sparkling grape juice drink). Not only does alcohol trigger your brain’s reward system to release dopamine, the ‘feel good’ hormone, but it’s also an excellent flavour carrier with a mouthfeel that’s nigh-on impossible to recreate. Unless you add heapings of sugar, of course, which didn’t fit with their vision.

Eventually the duo met a former technical developer from Diageo, who found the solution in plant form. “When you break wine down into its components, you want something fruity, spicy, and a bit bitter – and that basically means botanicals and fruit juices,” says Rucker. “Grape juice is pretty boring until you ferment it, and then the yeast creates all these crazy natural chemicals, which is why wine tastes so good. And typically what yeast is producing is often replicated by a plant somewhere else in a different form.”

After much experimenting they settled on the 18th recipe (hence the name), which married the juice of four types of berry with distillates and extracts of 20 different flowers, herbs and spices. A gastronomy journalist and Master of Wine were among the first to sample Nine Elms No.18, paired with a medium-rare steak (plus a glass of house Pinot Noir and house Merlot for comparison’s sake) at private members’ club Soho House. It went down a treat. In fact, both experts preferred Nine Elms to the wine options they were served. 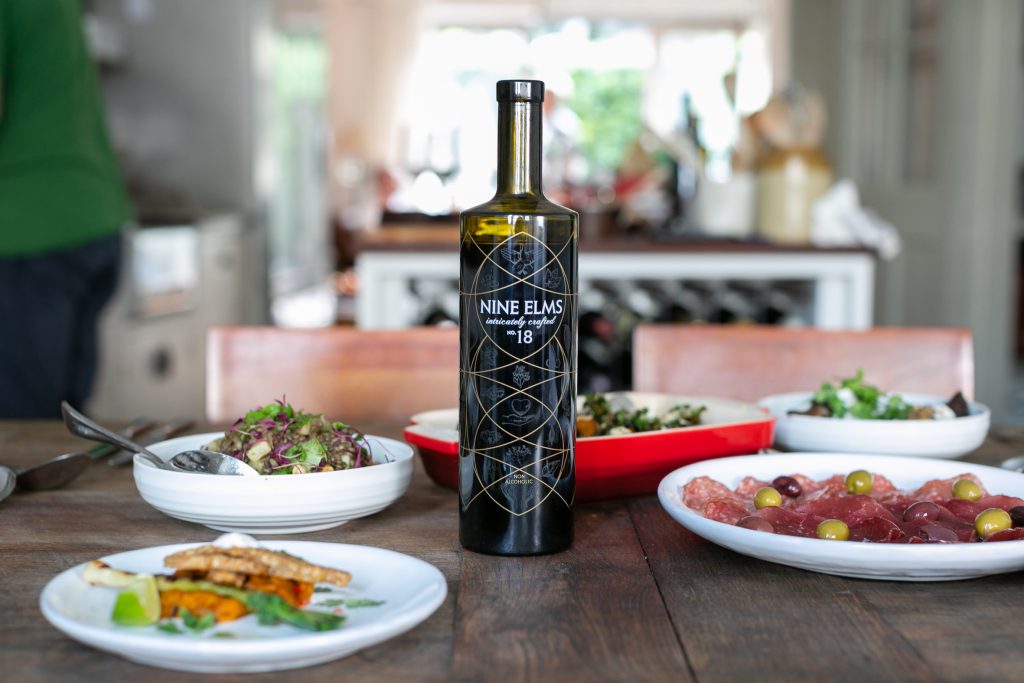 After years of research and development, Rucker and Szucs-Farkas had realised their goal: to create a viable non-alcohol alternative for high-end eating occasions. “Rather than trying to regulate away – or prohibit – problematic behaviour, my approach has always been to come up with a product that encourages people to make better choices,” Rucker explains. “It’s a truism in life, the carrot and the stick. You need to persuade people, and the best way of persuading people is by providing a better alternative.”

They finally had the liquid. But what about the name? “We realised that the past is a good starting point,” Rucker says. “Most creativity is looking back on what’s been done before and imagining it differently, so we started looking at the history around Vauxhall and the Pleasure Gardens.” Set against the backdrop of the gin craze, Jonathan Tyers’ gardens, adjacent to the Nine Elms area south of the river, defined the city’s nightlife in the 18th and 19th centuries. “He created a walled garden of delights where entertainment was the alternative stimulation versus alcohol,” Rucker says. “Tyers was one of the first people to publicly display art and sculpture, one of the first to put an orchestra in public on a dais. There was food and music. He basically invented mass entertainment, and it was all because he was trying to get Londoners off the booze.”

We’ve come a long way since the rampant alcoholism of the early 18th century. But even in 2020 – whether we’re in a high-end restaurant or enjoying dinner at home – a rich and indulgent meal can feel incomplete without a glass of something-or-other in-hand. And it’s this mealtime occasion where Nine Elms really shines.

Nine Elms no. 18 is available from Master of Malt.

Showcasing the value of vermouth with Vermò