From swanky decanters to the famous tasting glass, crystal and glassware manufacturer Glencairn is synonymous with the whisky industry. And as the family-owned East Kilbride company celebrates its 40th year, new product development director Scott Davidson tells us about that eponymous glass, competing with Rolex and the time he lent his brother a car.

Glencairn Crystal was founded by Raymond Davidson in 1981. Over the years the company has created decanters for pretty much all of the major drinks companies – from ruby-encrusted whisky vessels to decanters housing the world’s oldest port. And in 2000, Raymond created The Glencairn Glass, described as “the world’s favourite whisky glass” with 3.5 million per year going to around 140 countries.

Today, the company is run by Raymond’s sons, Paul and Scott. And Scott is here to tell us more about the business and his latest projects… 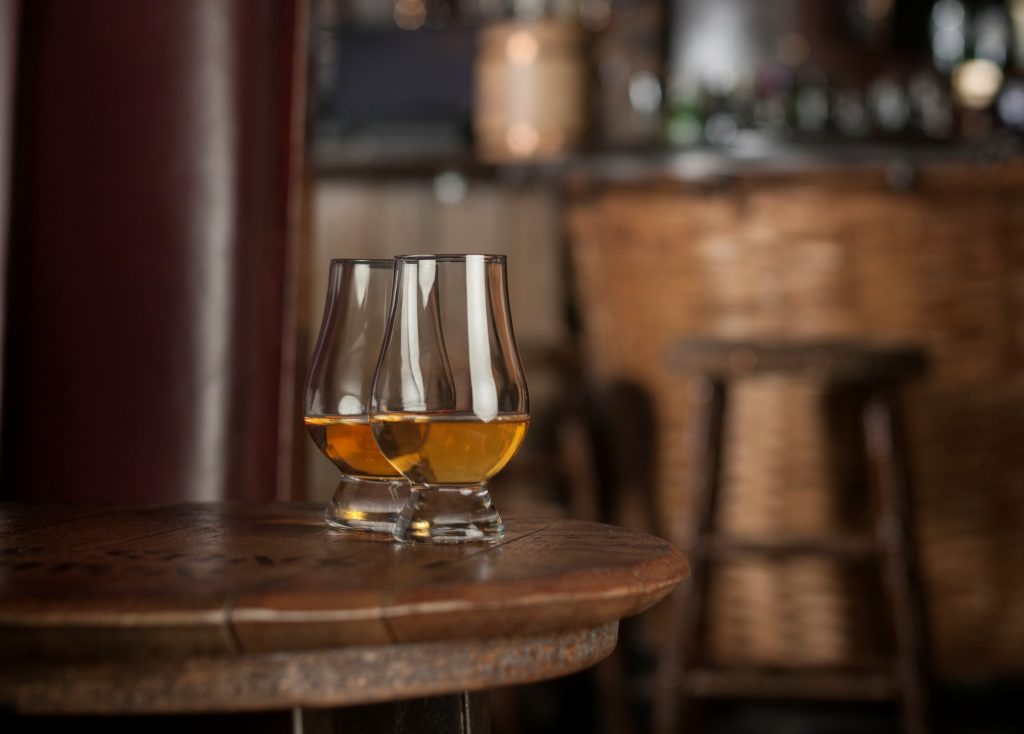 Master of Malt: Everyone uses the famous Glencairn tasting glass. How did it come to be so widely used? And what makes it so good for tasting?

Scott Davison: Three things come to mind: there was nothing generally being used as a standard before – that was the big thing for my dad.  Secondly, it was an evolution of how people would want you to consume it – we got the master blenders and people like Michael Jackson to help us create that shape. But probably the best thing is that it’s quite simple to engage with as a product, both for a novice or an experienced taster. It is easy to use. Whatever a master blender is talking about, you can get those aromas and flavours really quickly. And it encourages you to nose while you drink, which is what we wanted to do.

And with nothing else out there, it was the right glass at the right time.

MoM: You’re in charge of NPD – can you tell us what you’re working on?

SD: Consumers don’t often know the products we are involved with, so we’re doing some podcasts at the moment to interview some of those people we developed products with. We just did Michael Urquhart from Gordon & MacPhail – and the Mortlach 70 Generations project – the teardrop shaped decanter with the silver on it, made to look like a slight pagoda. That decanter took about two years from the initial concept.

In terms of recent launches, we worked on two 50-year-olds for Edrington – Highland Park and The Glenrothes. We did Brugal’s [Dominican rum] decanter last year… 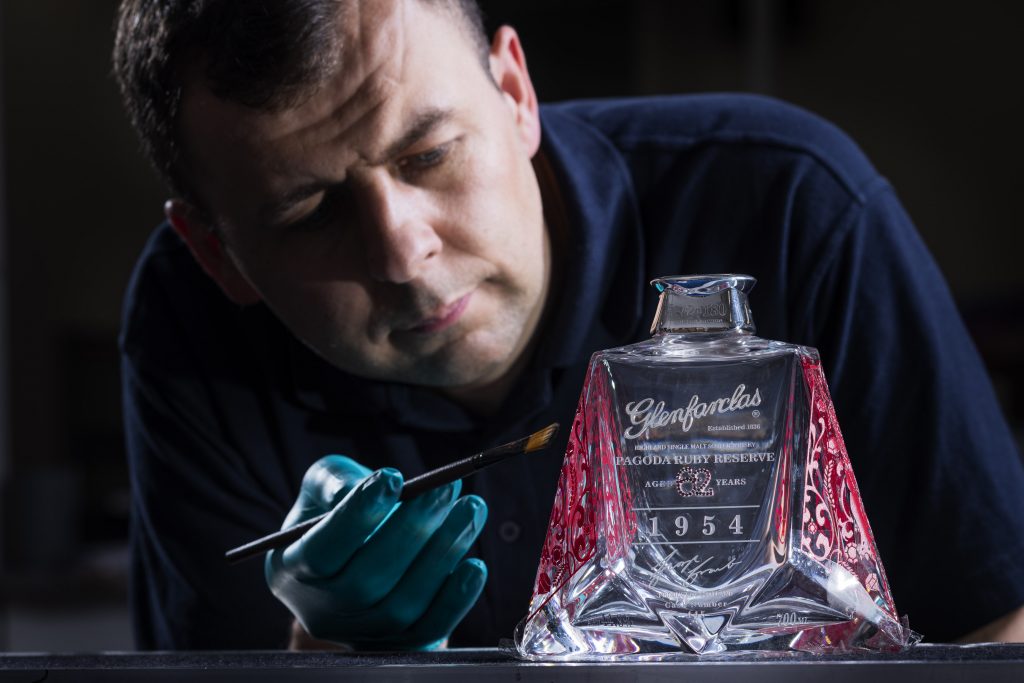 MoM: In the wine world, there seems to be a different decanter for different types of wine. Is it the same for spirits?

SD: It goes back to the ‘80s and generally if you wanted a whisky decanter, people just thought ‘square decanter’ and that was it. You know when you see the metal name tags around them – they would just put their name on the tag because there wasn’t anywhere to engrave it. Whereas today, everything is more driven by the brand – so we’re doing more from scratch to fit in with the profile of the brand. Companies are investing in custom shapes.

When a company comes to us, they say ‘we’re going to do something much higher end, how far can we push the brand identity’. For example, when Loch Lomond relaunched Littlemill, they picked a nice flat-ended oval decanter shape for the 25-, 27- and 29-year-olds. But they also had a 40-year-old and they said they wanted the same shape crystal but with fancy patterns. It follows the brand identity, but at a different level. That seems to be the driver – companies spend more time and resources because they get a better return if they do it at that level.

MoM: What’s the most elaborate commission you’ve ever worked on?

SD: Have you seen the Pagoda Series for Glenfarclas? Basically, it was an angular crystal decanter with copper finish, a silver finish and a gold finish and a special injected resin. It was a really complex bloody thing. And then they went from that to the Ruby – which was a 62-year-old whisky. And they asked for solid instead of plated silver and to set the ‘62’ with rubies. Then they did a Sapphire release – we’re talking £1500-2000 just on the crystal and the sapphires. It probably sold for $60-70,000 a bottle for the magnum size.

MoM: I bet that weighs a fair bit…

SD: Yeah – with whisky in it, it’s probably four or five kilos. 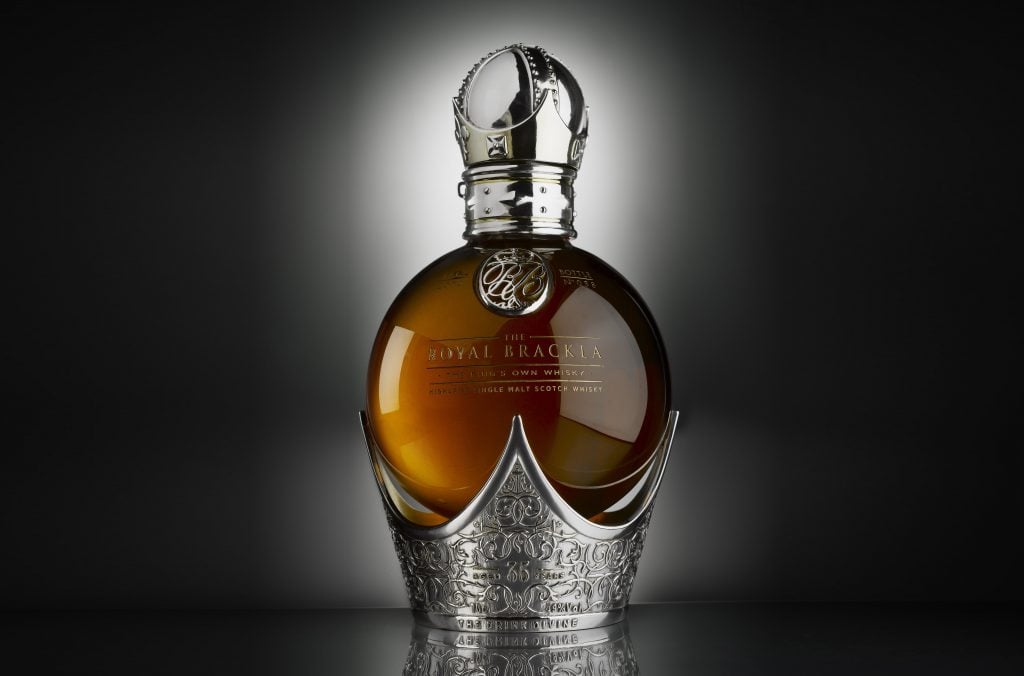 No, not holy hand grenade of Antioch, it’s the Royal Brackla 35 Year Old The King’s Own Whisky

MoM: What’s the most difficult thing you’ve ever made?

SD: One of the most difficult things I’ve made is the Dewar’s Legacy decanter. And The Royal Brackla 35 Year Old The King’s Own Whisky. For Dewar’s, they wanted it to pour through the silver. The whisky pours from the crystal, through a gold-plated lining tube which is part of that silver bit on the side. Never been asked to do it before – it was really complicated. It was not just blowing it and engraving it and getting the perfect shape, it was actually joining that piece of metal to the glass without the seal breaking on it and without it coming apart. If the seal weakened at all, then it might leak, and we couldn’t have that. The testing on it was unbelievable.

For The Royal Brackla, that’s a complete sphere of crystal, suspended on four points, 5mm x 5mm. And it wasn’t allowed to come apart so we had to ‘drop test’ it from about a metre to make sure it wouldn’t split.

The products we are making are generally a limited release – The Royal Brackla was about 120 pieces. It’s not like we’re manufacturing loads of these bottles a year. And they are competing against products that are being sold in duty free, for example. It’s going up against Rolex, against similar products at a similar value. But if you buy a Rolex watch – they make a hundred thousand of them. I’m being asked to manufacture a product of the same standard for just a short time. And that’s what we do. That’s what gives us the niche. For example, I have a team of eight people who are just dedicated to assembling metal ware on decanters by hand. And a team of 15 engravers and decorators. That’s our DNA.

MoM: How long have you been working in the family business?

SD: Since the ‘80s when I was still at university. I started before then but that wasn’t official.

MoM: You’re celebrating your 40th anniversary this year with the opening of a newly expanded studio – what’s new?

SD: We’ve been on the same site for over 25 years, but we have slowly bought all the factories around us and now we’ve just finished joining them all together. We have added capacity for warehousing and doubled our production space. We’ve always run out of space every five years, so we’ve more than doubled up to try and give us some longevity. We’ve upgraded everything as well and we’re introducing solar panels, so we’ll be independent of the grid. 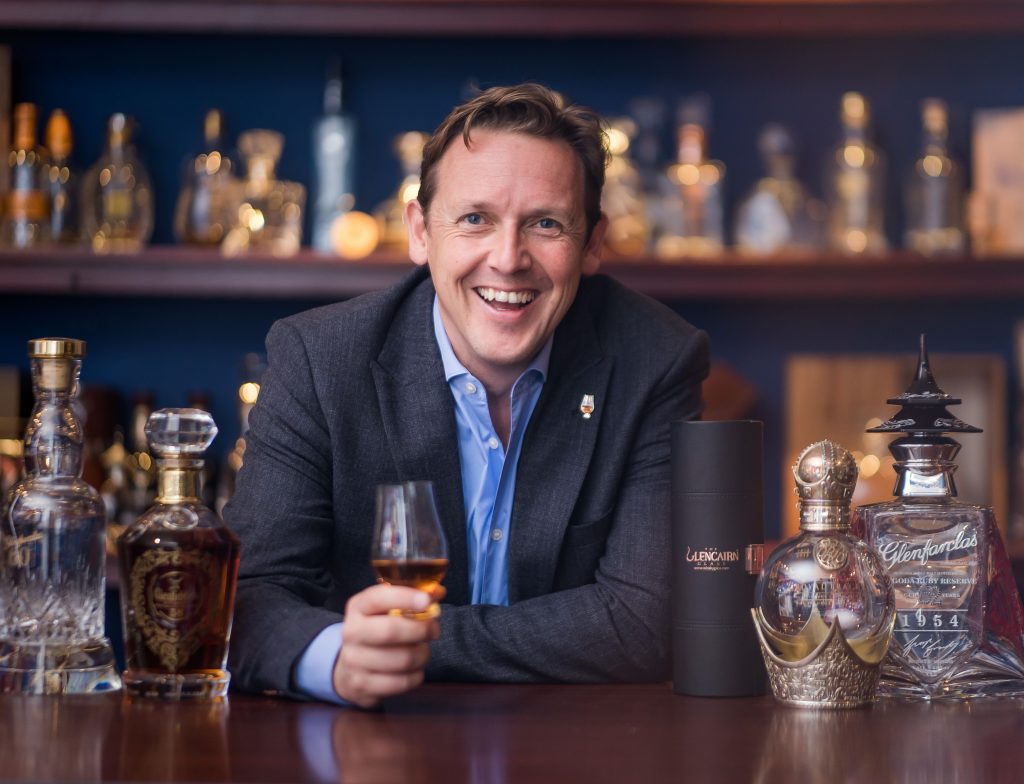 MoM: How do you get on working with family members? Any funny stories you can tell us?

SD: I work with my brother! It doesn’t get worse than that. Here’s a story that we still laugh about now: I like cars and in the ‘90s, I’d got myself a new BMW. I loved it. My brother asked to borrow it to go and visit a distillery. He drove away and came back, said it was great. That was that. I went outside and anyway, it turns out Paul had been in the queue at a roundabout, trying to figure out the stereo, and he went into the car in front!

I’m into cars and he’s into his music, so that just about sums us up. Let’s just say we’re always challenging each other.

MoM: What’s your favourite dram to sip from a Glencairn glass?

SD: That’s a tricky one. I like that I can run through them all. I do hark back to Hibiki 21. I’ve got two or three I jump between – Hibiki, Benromach 10-year-old and I do like Ben Nevis. Oh, and Craigellachie 23 and Glenmorangie Signet.

My default drink is Jack Daniel’s and Coke, from my uni years. I might go for a premium version now, but I still enjoy the original.