In today’s Tales From The Isle I’d planned to bring you the story of the devil’s final visit to Bowmore in some detail, but an action-packed day at Fèis Ìle means that this issue has rather taken on a life of its own! The story is still worth telling, however, if only in brief. The famous round church in Bowmore, constructed ten years before the distillery was established, is said to be round so that the devil had no corners to hide in. According to legend, the architectural trap worked so well that when he did finally pop by in 1837 he was instantly spotted and pursued down the road by an angry Christian mob. Entering the distillery buildings, he made his escape by hiding within a cask of whisky that was being loaded onto the Maid of Islay for transport to the mainland. It’s said that he never dared to return.

As we learned in the previous issue though, the absence of the devil won’t necessarily keep horror at bay. You may have heard by now about a little incident we had during Bowmore Day on the very same road the devil supposedly ran down. I suppose we’ll have to take the credit for it ourselves. Then again, perhaps the devil’s not so easily scared off, nor so easily recognised. Isn’t he always the one you least suspect?… 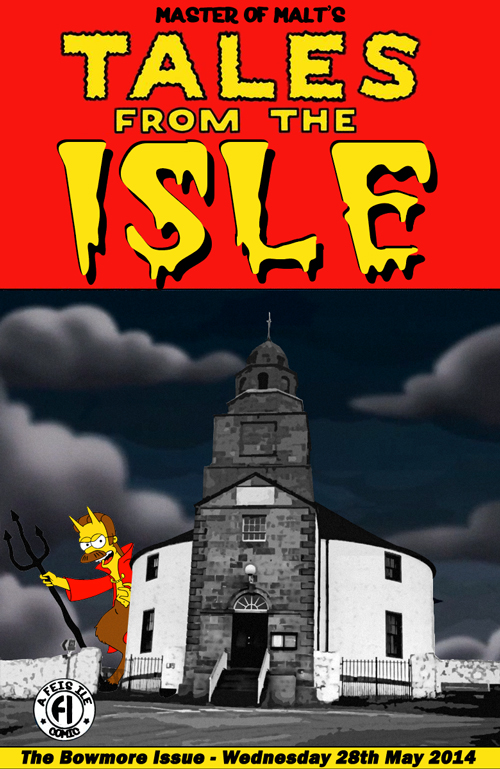 Before we move on to said incident, the festival bottlings, the fact that we finally managed to get aboard the Bessie Ellen (arr!) or the exclusive Gartbreck tasting we were able to attend later that evening, allow me to first say a little more about the dark lord Ned Flanders. It’s not just that the devil could feasibly hide in plain sight within a round church. Those of you who read last year’s Islay festival blogs will remember that there’s also a link between Bowmore and Flanders’ next door neighbours. Not only was Bowmore distillery founded by a John Simpson, but they also buy the proportion of malt not produce at their floor maltings from Simpsons! And we know how much The Simpsons enjoy a little horror…

Right. That incident then. Right in the centre of Islay’s administrative capital – during the open day of the town’s distillery – one of our number may have done a little unconventional ‘parking’. I think we got away with it though. I mean, it’s not as if the local paper’s photographer was on the scene within seconds (before the police) or that they were joined by a veritable swarm of photo-taking social media users… 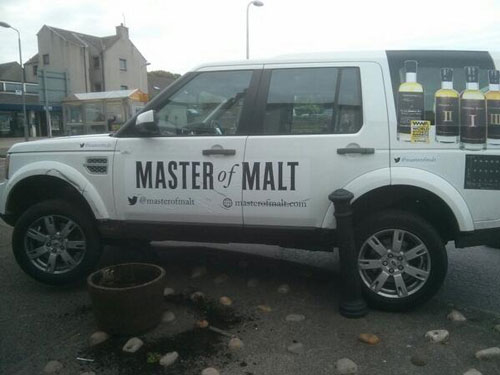 A nice pic of our parking here taken by @TIA568B – doesn’t look so bad… That tyre should probably be touching the ground though. 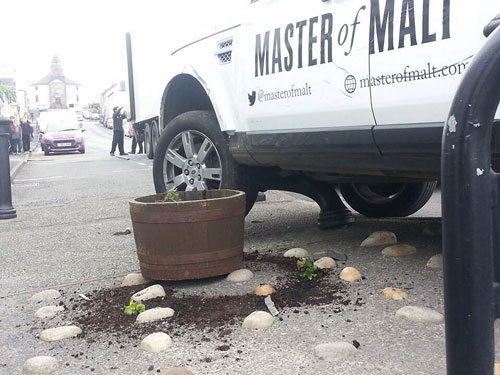 This one courtesy of @whiskycast – yes, that would be a bollard under the car then. 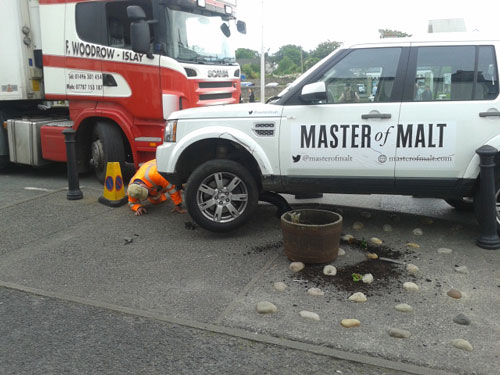 “Yeah, so you lot are knackered. We can’t do anything without causing further damage.”

Once the local constabulary had finished their enquiries Ben decided the best thing to do was probably just to drive the thing off.

“I later discovered this car does not have a differential lock, but actually uses a traction control system where a spinning wheel is braked by an on-board computer, so effectively we were both right.” 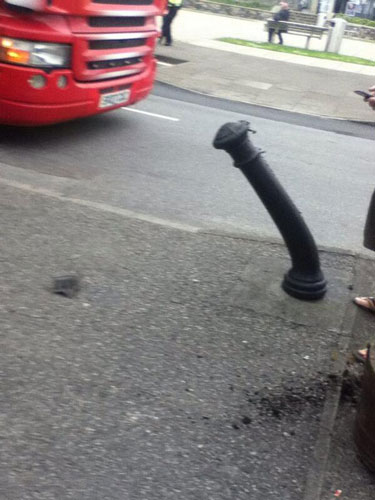 Here’s one from @davidjbrodie of Lochside Hotel and Duffies Bar 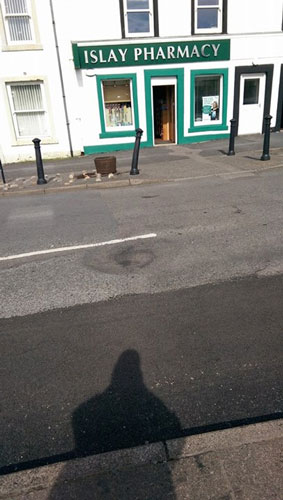 Thank goodness for the flexibility and powers of recovery of plastic bollards. Look, it’s nearly straight again now – this pic’s from Facebook by the way. (Yeah, it’s definitely all over there too.)

I should clarify, given the reason for our trip to Islay, that absolutely no alcohol was involved here whatsoever. Just some rather interesting decision making. Anyway, all’s well that ends well… probably.

Once the MoMM was safely in the garage having a little check up (being a Land Rover it’s mechanically completely unscathed) we could then begin to worry about the day’s whisky. One of the festival bottlings was sold out before we could get our hands on it, but luckily Bowmore had also released two others: 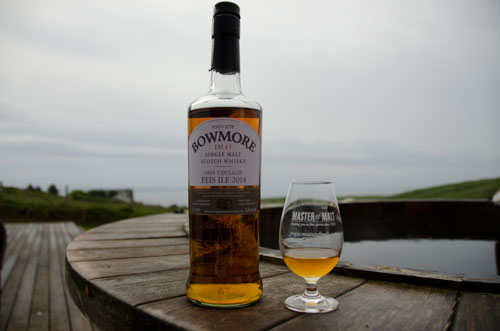 This more expensive vintage Fèis Ìle release is a marriage of first-fill American oak barrel and ‘French wine’ barrique matured for 24 years and bottled at 53.3%

Nose: Yummy orange, caramel – the first impression is certainly that this has enough bourbon influence to stand up to the wine. Rich, creamy and fruity with Rich Tea biscuits, Dime bars and Caramac bars too.

Palate: A whole load of toasty spices and a punnet of raspberries in the sea breeze. 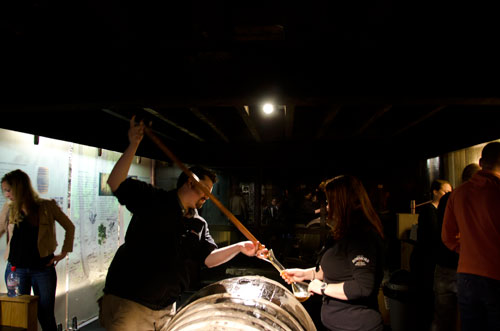 The next one we got to fill ourselves… 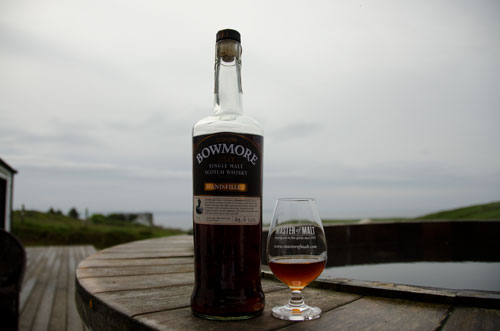 Distilled on 13th July 1995 and bottled by our fair hands in May 2014, it was matured for nearly 19 years in an Oloroso butt. No filtration here (we turned down the sieve), so there’s a load of charcoal goodness in there too!

Nose: Awesome. Get in my face. Oh, you want a little detail first? Deep, dark caramel poured all over Corinth raisins. Melted dark chocolate, sticky prunes, orange peel and marzipan. A few drops of water brings out a shed load of black cherry.

Overall: If you ever find yourself in Bowmore, do yourself a favour and go and do a hand-fill bottling. 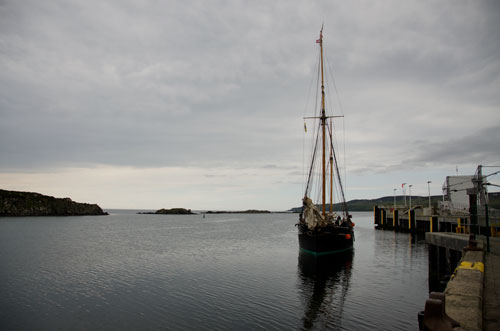 After lunch we were off to a whisky tasting on the high seas (well, just off the shore) organised by those good peoples from The Whisky Lounge. Yep, we finally got to go aboard the Bessie Ellen that we were waxing lyrical about in Monday’s issue, a wooden coasting ketch that’s become a familiar sight at Fèis Ìle. Shortly after coming aboard, the Master of Malt team were then the first invited to steer the ship… 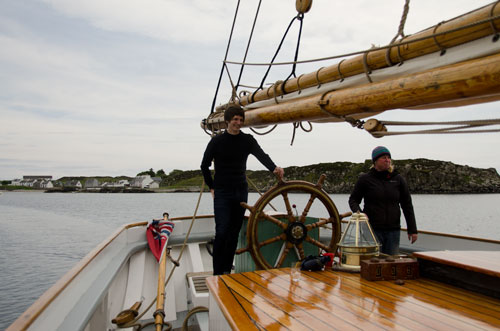 This involved me being given the single greatest instruction ever:
“We need to head over there now, so spin the wheel like Captain Jack Sparrow!”

Now you may be thinking why on earth would the Bessie Ellen’s captain allow one of the bunch of idiots who’d literally come straight from running another vehicle aground to steer her beloved ship? Fortunately she had no idea. For about five seconds. Like I’ve said, knowledgeable this Fèis Ìle crowd. 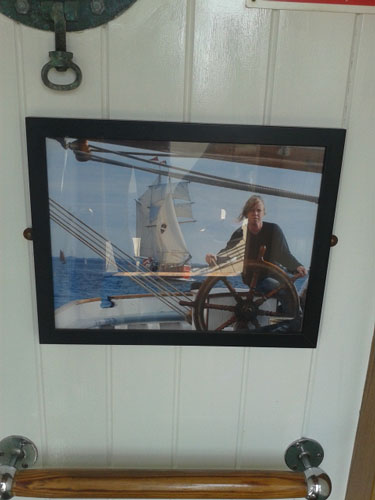 Captain Nikki Alford, a bit of a hero.

She may have been especially nervous as The Bessie Ellen herself has slightly dark past with a former Captain named John Chichester being pinned by the ship back in 1912. The internal injuries he suffered were substantial, and he sadly died soon after. 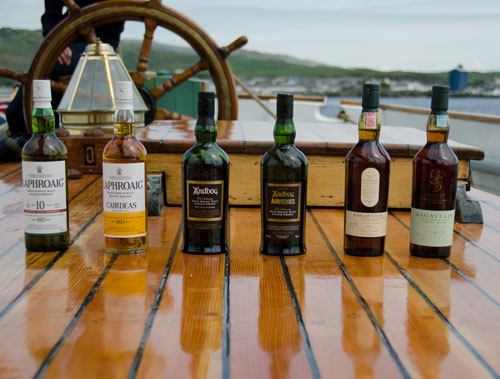 Not a bad selection, eh? Especially when enjoyed alongside views of Laphroaig, Ardbeg and Lagavulin from the sea (<- and if you click on said distillery names just here, you’ll be able to see said views). Extraordinary stuff, we highly recommend it and The Whisky Lounge may be doing even more events with the Bessie Ellen next year. You may even get to stay below deck… 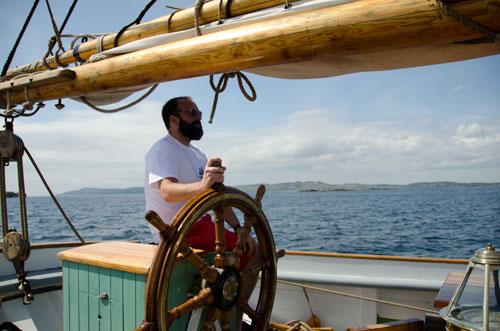 Eddie Ludlow – one of the good peoples, as Sam would say. 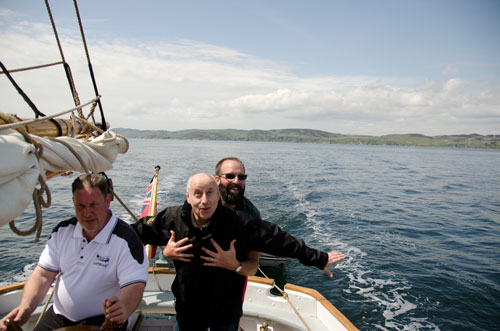 My heart will go on Eddie! (But if the worst should happen, probably don’t let me freeze to death for no reason whilst you sit on a huge makeshift raft.)

The devil, drama, festival bottlings, sailing, and that’s not all. Still to come in this bumper issue of Tales From The Isle, we meet the folk behind Islay’s ninth distillery: Gartbreck!

An ‘artist’s impression’, as is de rigueur these days.

Martine Nouet hosted an excellent tasting and food pairing (each whisky was paired with both savoury and sweet nibbles) at her “House of Bliss”, along with Gartbreck’s Jean and Martine Donnay.

When Jean began to follow his dream of making whisky, he started the Celtic Whisky Company in 1998, before being able to open Glann ar Mor (Gaelic for ‘by the sea’) distillery in Brittany back in June 2005. In 2006 they began producing their peated whisky (Kornog) for the first time and their new distillery on Islay may well have its own open day by 2015. (Spirit will hopefully be running by the end of that summer.) If you know anything about Jean Donnay, Icons of Whisky Rest of the World Distillery Manager of the Year for 2014 – the self-styled ‘slowest distiller in the west’ – then this is something you should be very, very excited by. 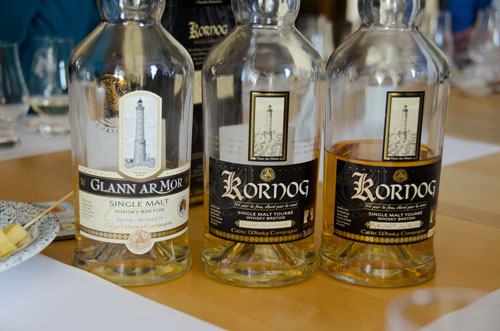 Gartbreck will very much follow Jean’s philosophy from Glann ar Mor, this means direct-fired stills, worm tub condensers and wooden washbacks. They plan to use local barley, with around 20% being malted on site and it will be peated to around 35-40ppm much like their Kornog releases. Capacity will be just 55,000 litres with a 2,500 litre wash still (the same size as Kilchoman, although Gartbreck is unlikely to run at full capacity – about two and a half times larger than Glann ar Mor) and interestingly, he won’t be using a rummager in those direct-fired stills. Jean says that they’re prone to breaking and the wear and tear and scratching reduces the lifespan of the still by around 30% – he chose not to use one in Brittany and believes his experience will allow him to operate without one on Islay too. When it comes to maturation, Jean is a big believer in bourbon casks but was the first to use Sauternes casks back in 1997. He says he’ll continue to use a small amount of these as well as a small amount of Sherry casks. 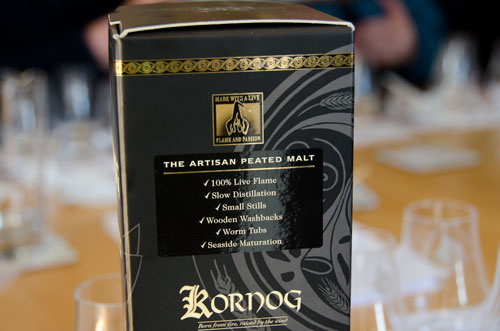 We tasted the standard Glann ar Mor release (around 3 and a half years old, grassy, a little meaty, lots of lively spring notes and golden syrup) as well as the standard Kornog (around 4 years old, more maritime, sea wall, oily, sweet malt, caramel akin to biting into a Werther’s Original – was paired with a great chocolate and raspberry mousse that brought out the smoky cigar notes). Then Martine Nouet introduced the third whisky, taken from the oldest cask of Kornog, a cask that she owns! 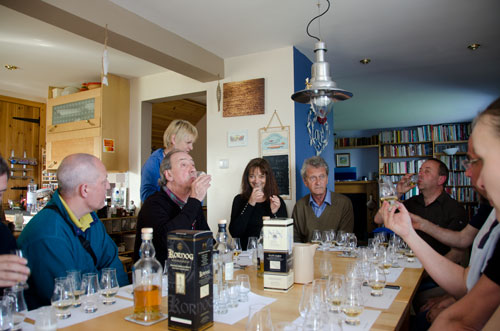 The House of Bliss

Overall: A huge thank you to Martine for sharing this with us, a fascinating insight into what could be to come… 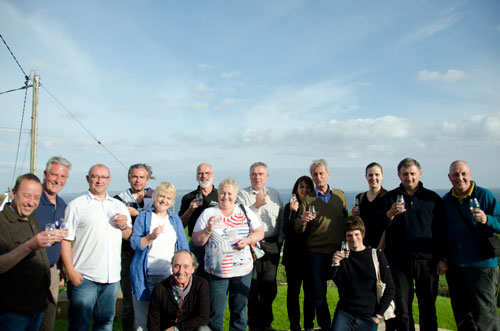 Cheers to Jean, Martine and Martine! 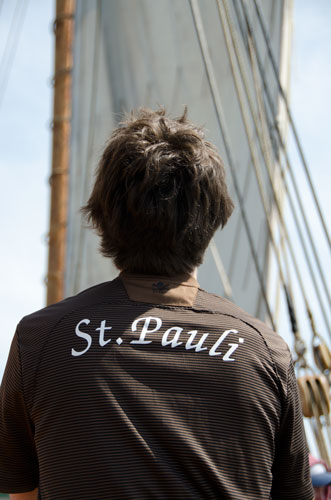 I don’t think I’ve had this much fun since International Talk Like a Pirate Day!
(Which I guess may actually edge it as it didn’t involve any road traffic accidents…)

Five New Boutique-ys Including a Bruichladdich