Perhaps you’ve clocked them on a cocktail menu or noted references to them in history books – but what exactly are shrubs, and how do they fit into modern-day drinking culture? We delve into the enticing world of ‘drinking vinegars’ with Henry Chevallier Guild, eighth generation Aspall Cyder family member and creator of new drinks line, Nonsuch Shrubs…

First things first: a shrub is sweet, sour syrup made by macerating vinegar, fruit, and sugar. There are a number of ways you can achieve this (a quick Google throws up at least five different methods), but the most common process involves creating a fruit-infused vinegar using seasonal produce, and then sweetening it with sugar.

The word ‘shrub’ is derived from the Arabic word sharāb, which translates as ‘drink’; interestingly ‘sherbet’ and ‘syrup’ also stem from this root. Shrubs have a long and storied history; preserving fruit long past its sell-by date due to the acetic acid in the vinegar, improving the flavour of saliferous water (or booze!), and protecting sailors from scurvy, among other uses.

The first recorded shrub dates back to the Babylonian Empire, when farmers would preserve leftover produce from the date harvest in vinegar to create a “very sweet, sharp, syrupy, cordial-type liquid” that would be added to water. “It had a double use,” Chevallier Guild explains. “The theory goes that it would make brackish desert water taste quite interesting, and because of the low pH of the vinegar it’s actually quite good for killing off pathogens.”

Later the Romans adopted the concept, developing their own version called ‘posca’. “You get an awful lot of vitamins and nutrients packed into a condensed amount,” he says. “Every Roman legionnaire would go off to war with a gourd of posca, which he would then mix with water that he’d find in the village on the way.”

From there, the humble shrub swept across the globe, transcending centuries and morphing into different forms – America, for example, historically produced ‘switchel’; a mix of maple syrup, cider vinegar, honey, ginger and water – until the process largely fell out of fashion thanks to modern refrigeration and pre-mixed drinks. 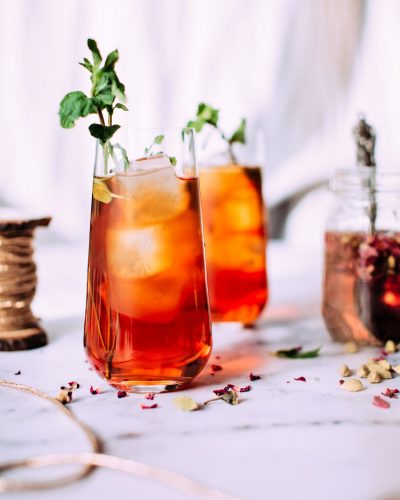 How the Romans drank shrubs… Probably

These days, however, this sweet, tangy infusion can be found decorating cocktail menus across the globe – or, as Chevallier Guild has discovered, antidoting the alcohol-free conundrum. His journey into shrub discovery first started about 10 years ago, upon meeting his wife, Lizzie. She gave up drinking for one month every year and encouraged him to do the same. At the time, Chevallier Guild was about to become chairman of the National Association of Cider Makers, and alcohol was “a bit of a pariah”.

“I put up such a strong fight that it actually made me think, ‘hang on a minute, why am I protesting so much?’,” he explains. “I figured that if I was going to sit in front of health ministers and talk about the fact that there’s no such thing as problem drinks, just problem drinkers, then I’d better be able to prove it to myself.”

Taken aback by “the complete paucity of anything interesting to drink if you’re not drinking alcohol”, Chevallier Guild set about pairing fruit concentrates used in the Aspall production process with premium cordials and herbs. He’d never heard of shrubs, and instead referred to his creations as drinking vinegars, serving them with tonic to friends and family when they came to visit.

Fast-forward five years to a cocktail bar in Williamsburg in Brooklyn, New York. “There was a big sign on the wall that said ‘try our house shrubs’,” recounts Chevallier Guild. “I said to the barman, ‘what’s that?’, and he said, ‘well, it’s a drinking vinegar’. Of course, my antenna just popped up.” He began researching the history of shrubs with zeal, and the foundation for Nonsuch Shrubs was set down.

The ready-to-drink range is currently made up of three flavour variants: Blackcurrant & Juniper, Sour Cherry & Garden Mint, and Peach & Basil, with “about a dozen” more flavours undergoing testing with new releases to follow in the spring. A cocktail syrup range is also on the horizon.

“The great beauty of making it at home is that if it’s a bit too sour you add a bit more sugar; if it’s a bit too sweet you add a little more vinegar,” he explains. “It probably took two or three goes for me to hit that holy grail of sweetness, acidity and savouriness.

“Once you’ve sort of got the basic shrub recipe in terms of flavour profile, it’s just a question of experimenting with interesting fruits and flavours and herbs and extracts. It’s a bit like making risotto – once you’ve worked you how to get the rice creamy in terms of frying and blending liquid in, you can do pretty much anything on top of that.” 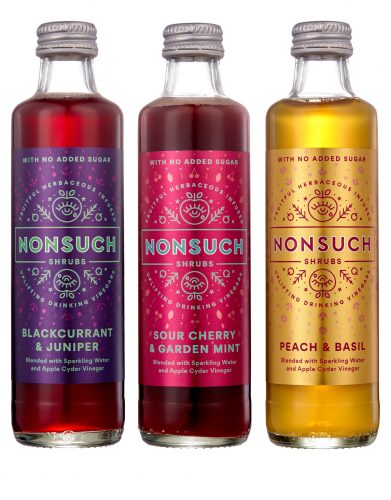 To create the shrubs, Chevallier Guild blends high-concentrate fruit juice with vinegar and herb extracts to make an infusion. There’s no need to add sugar, due to the fructose present in the fruit juice. While there are less calories in a Nonsuch tipple than a glass of wine or a G&T, they’re not intended to be a health drink.

In creating Nonsuch Shrubs, Chevallier Guild sought to create a drink that “behaved exactly like an alcoholic drink in every single way, except it doesn’t get you drunk.” He became intrigued by the science between booze, brains, and social rituals.

“When you drink alcohol, your liver sends an enzyme to the brain to say ‘release dopamine’,” explains Chevallier Guild. “That takes between 15 and 20 minutes, but the brain does this very interesting thing where it shortens the process. It’s an evolutionary survival tool

“When we have a glass of wine or a Gin & Tonic after a hard day, we take one sip and go, ‘oh my god, that’s better’, and immediately relax. Even though the alcohol hasn’t even hit your system, the brain goes, ‘I know what’s going on here, we’re taking alcohol, we’re supposed to be relaxing, let’s cut out the middleman and release the dopamine’.”

What’s this got to do with shrubs? Well, in the process of designing the range, Chevallier Guild set up a number of taste panels and was surprised that “at least two or three people” on each round asked whether they contained alcohol, because they were “feeling a bit giddy”.

While there’s admittedly trace alcohol in some of the extracts used, the abv is akin to “putting Angostura bitters in soda and lime” (i.e. practically nonexistent), and certainly not at a level that you’d feel the effects. In this sense, shrubs seem to make the ideal non-alcoholic replacement. 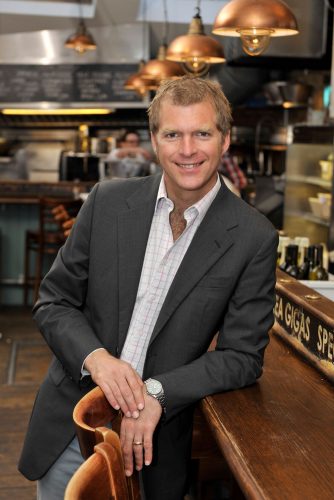 “My wife and I have found that when you’re not drinking but you both fancy a cider or a beer or a wine or something, you go, ‘let’s just have a shrub and see what happens’,” says Chevallier Guild. “Invariably within five or ten minutes, the urge to have a drink goes away.”

It’s not just about abstinence either, he adds. “When you get to that point after dinner when you’ve had an aperitif and a glass wine with dinner, and then maybe a digestif afterwards; as far as the alcohol is concerned, you don’t really need another drink – so have a shrub.”

Alcohol is not the sole trigger of dopamine during drinking occasions, Chevallier Guild tells me; it’s also sparked by social rituals. “In certain cultures, just being around friends and family does the same thing. In Britain, we do it with an alcoholic beverage in our hand. Conviviality is what triggers a relaxing evening, actually more than the alcohol does, and we don’t really understand that terribly well in this country.”

Thankfully, the dynamic of such social occasions is changing (albeit slowly) thanks to the fast-growing alcohol-free sector. As for Chevallier Guild and his wife – well, the annual dry month has been replaced but a rather more balanced approach.

“We’re less harsh on ourselves now, feast and famine is not good,” he acknowledges. “Rather than doing the month off, we’ve stopped drinking in the week. And actually if we’re not doing anything special at the weekend, there’s no real need to have a drink on Saturday night. Our style now is translating into drinking less, and do you know what? It’s so, so much easier when you’ve got a fridge full of shrubs!”