Cocktail of the Week: The Stone Fence

Millie Milliken
No Comments on Cocktail of the Week: The Stone Fence

Bourbon and cider come together to create one of the cocktail world’s more simple but obscure serves. From Connecticut to east London, we explore the hazy life of the Stone Fence.

Breton Cider is a powerful beast. The hazy, fermented apple juice can make you do interesting things. For me, it was the catalyst for an unexpected evening at a Slipknot gig in Ally Pally; for Kevin Armstrong of Satan’s Whiskers, it forms part of his Stone Fence cocktail.

During lockdown, the Bethnal Green bar got together with Maker’s Mark bourbon to create a bottled limited edition version. Combining Maker’s Mark, cider, lemon cordial, ginger and orange bitters, I found it the perfect 2pm livener for a lazy Easter Sunday.

Despite having reportedly been around since the 18th century, the Stone Fence is still a relatively unknown cocktail. “It’s like an obscure classic,” says Noel Venning of fellow east London bar Three Sheets, where the cocktail has been on and off the menu since its opening in 2016.

Indeed, its origins are opaque. According to the intrepid drinks historian David Wondrich in an article for Esquire: “The name ‘Stone Fence’ alludes to the effect produced by getting outside too many of these, which is not unlike that produced by running downhill into one.”

He goes on to explain how the drink also called the ‘Stone Wall’ has its origins in the volatile atmosphere of revolutionary America when in 1775 a group of New Hampshire colonists known as the Green Mountain Boys decided to seize Ticonderoga fort from its well-armed British garrison. To prepare, the gang needed a little Dutch courage.

Wondrich writes: “What do you drink before taking on a garrison of well-entrenched professional soldiers, a garrison that has 100 cannon to your none, with nothing more than a gang of high-spirited part-timers? According to the Green Mountain Boys, you drink cider. Hard cider. In fact, hard cider with a hefty shot of rum in it. A lot of it.” And so the Stone Wall was born. Over time, the drink evolved to include whiskey and became the now-known Stone Fence.

It’s appeared in various forms ever since. In 1872’s Cooling Cups and Dainty Drinks by William Terrington, it features in the ‘Cobblers and Smashes’ section with a simple recipe of a gill (quarter pint) of whiskey, half pint of cider and half pint of shaved ice.

However, in Louis Fouquet’s 1896 Mixellany’s Annotated Bariana the cocktail calls for Cognac and sweet cider; while Harry Johnson in his famous 1900 Bartender’s Manual instructs the reader to gather a whiskey glass for serving, one wine glass of whiskey, two or three lumps of broken ice and to: “‘Fill the glass with cider, stir up well, and serve; as a rule it is left to the drinker to help himself to the whiskey if he so desires.” A cider and whiskey chaser, if you will.

More modern iterations include that of Jim Meehan in his 2017 book Meehan’s Bartender Manual combines cider, bourbon whiskey, grade A dark amber maple syrup, and the option of adding a dash or two of Angostura bitter, the latter becoming more mainstream in modern serves. 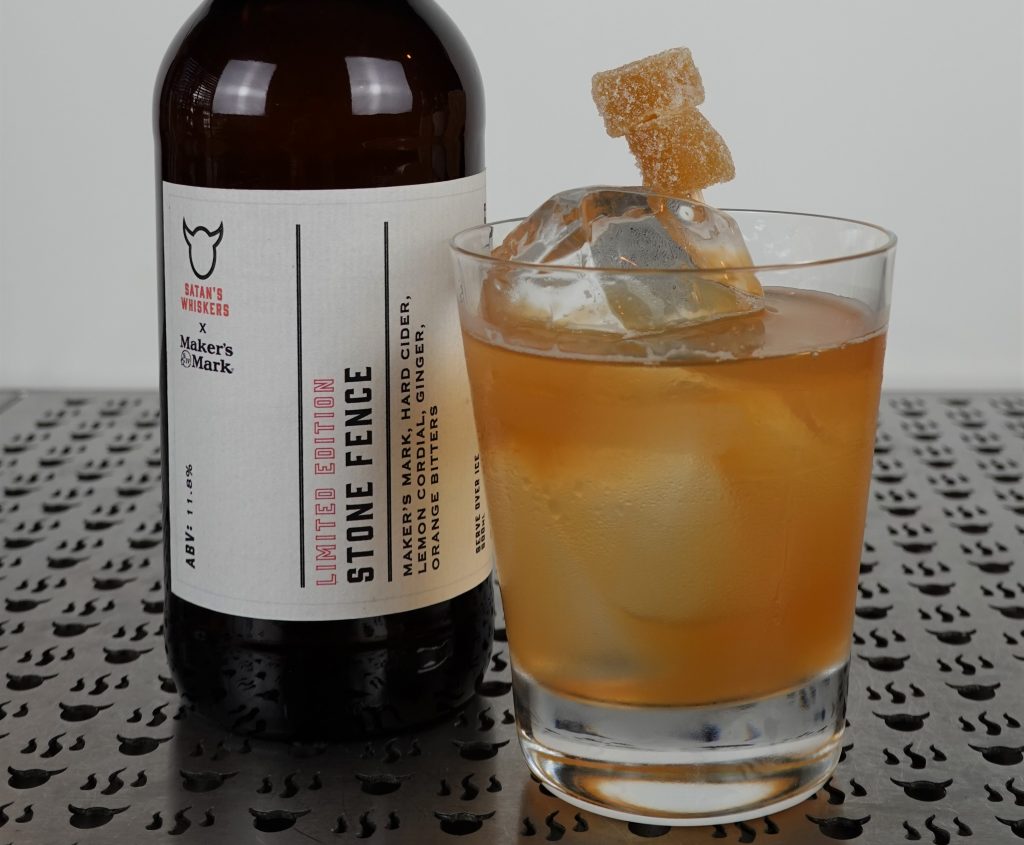 The first time Armstrong put a Stone Fence on the menu was during his time in charge of the bars at Match Bar Group. “I looked after all the recruitment training menus for Milk and Honey, Trailer Happiness, etc and one of the people that was working as a consultant was Dale DeGroff [American master mixologist, award winner and ‘King of Cocktails’]. Whenever we did a Matchbar menu we would do a ‘Dale’s page’ which had some of his originals. At one stage we put an entire page of Stone-related drinks, using the same recipe but different base spirit.”

During the pandemic, Armstrong wanted a bottled bourbon drink that wasn’t a Manhattan or an Old Fashioned (“high booze content, a little bit boring”) and was looking for something lighter: “Everything we did was about creating a range of drinks that could be drunk at midday, 2pm or 1am, 2am. There aren’t that many long carbonated good cocktails so the Stone Fence is comfortably more accessible. We have a brilliant in-house recipe so we thought, ‘let’s work on that and see if we can make it work in a bottled cocktail’.”

Ginger juice was replaced with a clarified ginger syrup; fresh lemon was dried and then rehydrated into a sugar syrup; followed by lemon, ginger and orange essences; pressed apple juice was added as was a blend of Breton cider and West Country ciders for extra dryness; and a healthy slug of Maker’s Mark topped it off. “Maker’s Mark was really excellent with getting the balance right and it also comes in at a lower ABV than some other bourbons,” says Armstrong.

The riffs keep on coming

Over at Three Sheets, the recipe for its Stone Fence cocktail has evolved over the years while also keeping regulars happy. “We always have the ability to serve it,” explains co-owner Venning who credits his brother Max with creating the original bar recipe. “We always keep a batch of the drink on hand because we have regulars who drink it exclusively.”

Describing it as a good summer-to-autumn drink, Venning reckons it’s changed three times since 2016. A recipe in a previous bar he was at the helm of used pear with Calvados. Now the Three Sheets recipe calls for 25ml bourbon, 5ml Merlet Peche, 5ml 2:1 sugar syrup, 25 ml lemon juice, 5ml egg white, two dashes Angostura bitters, 50ml soda water and a Breton cider top. Served in a chilled water or fizz glass, the first six ingredients are shaken with ice until diluted. Soda water is added to the bottom of the glass, then the shaken ingredients are double-strained over it, left to settle and topped with the Breton.

Hopefully the rise in popularity of American whiskeys – will see the Stone Fence become somewhat less obscure than it has been in recent years. Venning is hopeful too: “It’s a bit left field, but I think bars are trying to increase knowledge of it.”

Build together in a Collins glass, fill with ice and garnish with an apple fan.

*Recipe calls for unfiltered hard apple cider which is usually dry and still. If your cider is sweeter then cut back on the maple syrup; if it sparkles, then it’s probably fine to use. It’s the quality that matters.

A spotlight on... Sin Gusano