Cocktail of the Week: The New York Sour

Henry Jeffreys
No Comments on Cocktail of the Week: The New York Sour

Today’s we’re making a rather forgotten-about cocktail made with bourbon and red wine. Yeah, it sounds a bit crazy, but trust us, you’ll love the New York Sour.

There’s a lot of cocktails named after parts of New York, the Manhattan, obviously, but also the Red Hook, the Harlem Nights and the Staten Island Ferry. This week we’re making a drink named after the entire city, the New York Sour. It’s essentially a whiskey sour made with bourbon but with red wine floating on the top.

What? Red wine and bourbon? Sounds a bit disgusting, doesn’t it? Red wine and bourbon aren’t what you’d call a classic cocktail pairing like, say, gin and vermouth. But actually red wine and whisky have a long history together. Queen Victoria herself used to enjoy Scotch mixed with claret. No one was going to tell her she was doing it wrong. Stop and take it apart for a moment and it makes sense. Whiskies are increasingly aged in different casks including one that formerly held red wine. Think of the delicious Starward Nova from Australia or the recent Aberfeldy aged in Pauillac casks. We’re happy with fortified wines, like Port and sherry, in cocktails. So why not red wine?

The sour is the cocktail stripped back to its basic parts: alcohol, sweet and, of course, sour. Adding the red wine adds a bitter element, rather like adding bitters or vermouth. According to Difford’s Guide, the New York Sour cocktail history probably dates back to the 1880s and was first made in Chicago, not New York. It’s been through a number of names like the Claret Snap and the Brunswick Sour before settling on its current name. There have been other New Yorky cocktails: Harry Craddock has a drink called a New York Cocktail in The Savoy Cocktail Book, a sour made with Canadian Club whisky and grenadine but no red wine; David Embury writes about a similar cocktail called a New Yorker also made with grenadine but he writes “a spoonful of claret may be floated on top if desired.” The only problem with this is that as grenadine is also red, you don’t really get the pretty two layer effect which is half the fun. 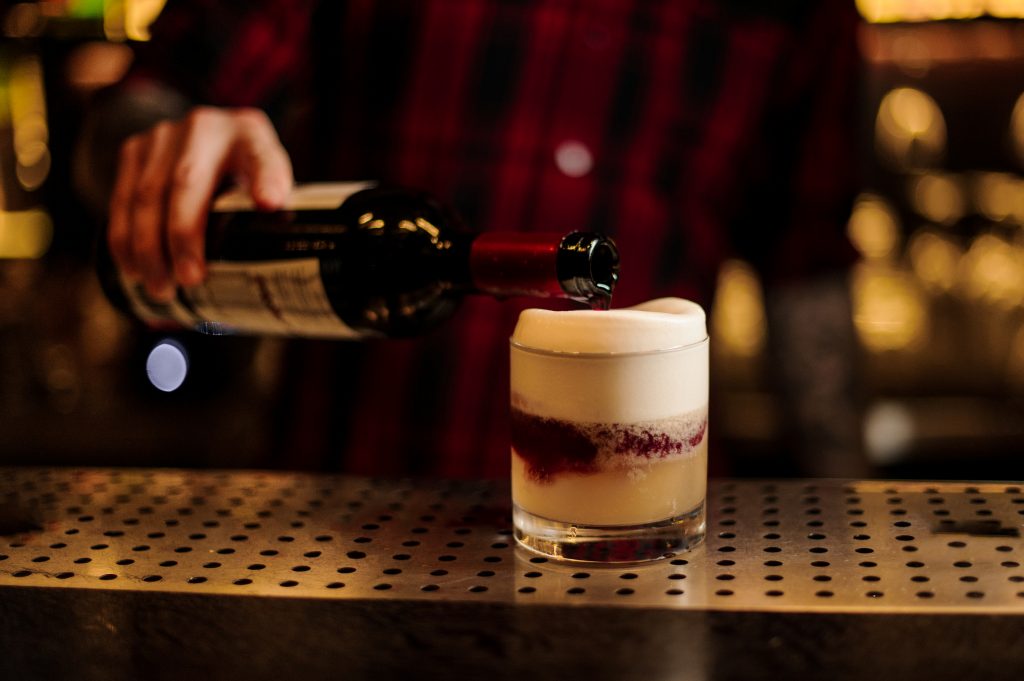 Careful pouring the wine so that it floats on top

Neither call for egg white but it’s a nice addition as it looks pretty and makes your drink taste all fluffy and lovely. The recipe below is served on the rocks in an Old Fashioned glass but you could serve it straight up. For bourbon I’m using Woodford Reserve because a) it’s delicious b) it’s what I have in the cupboard. And then the big question is what sort of red wine to use. The traditional accompaniment would have been claret, red Bordeaux, which would have been even more tannic back in the early 20th century when it was colder and grapes weren’t picked so ripe. Whatever you decide, it’s worth using something which has a bit of bite to it. A jammy Californian Merlot just won’t cut the mustard or anything that’s too oaky. Instead, if you’re trying New York Sour variations, try something bitter and interesting from Piedmont (the home of Italian vermouth) in northern Italian like a Barbera, Dolcetto, or even if you’re feeling fancy, Barolo or Barbaresco would turn this drink into a special occasion.

Add all the ingredients except the red wine to your cocktail shaker and “dry shake” without ice for 10 seconds, then take the shaker apart and add cubed ice. Shake vigorously and double strain into an old-fashioned glass filled with cubed ice, then slowly pour the red wine carefully down the side of the glass and with any luck it will float on the top.

Recipe from The Cocktail Dictionary: An A–Zof cocktail recipes, from Daiquiri and Negroni to Martini and Spritz by Henry Jeffreys published by Mitchell Beazley, £15.99.