Annie Hayes
No Comments on Cocktail of the Week: The Hard Seltzer

Those who live outside of the US might not be familiar with the concept of a Hard Seltzer. The trend is certainly yet to catch on among us Brits. To gain a little industry insight, we stirred down the popular Stateside serve at a J&B Rare masterclass with Channel 4’s Sunday Brunch drinks experts Neil Ridley and Joel Harrison…

A whisky highball on steroids. That’s my first impression of America’s beloved Hard Seltzer, which has exploded in popularity both as a bar serve and in bottled form (good explanation for the trend here). Seltzer drinks – “effectively naturally-flavoured sparkling water,” Harrison explains – are absolutely booming across the pond, and their boozy iterations are set to become a US$2.5 billion category by 2021, according to an estimate shared with Business Insider.

If you hadn’t already guessed, the Hard Seltzer is flavoured water “with an added element of alcohol,” Harrison continues, “often whisky, so it’s essentially a Highball but with flavoured water.”  Despite runaway success overseas, in Blighty, the term has most of us scratching our heads (hard soft drink doesn’t quite have the same ring to it), which is ironic, really, since the serve in its simplest form was initially made with liquid from the UK.

Well, sort of. In The Mixicologist, Or, How to Mix All Kinds of Fancy Drinks, penned by Chris F. Lawlor in 1895, there are two recipes, says Harrison. “The first calls for British Isles whisky, likely Irish whiskey at the time, lengthened with soda water,” he explains. “In terms of measurements, [Lawlor] simply says, ‘Let your guests help themselves to the amount of whisky they like, and top the rest up with water’. There is also another recipe for a B&S (Brandy and Soda), where he calls for a ‘pony’, which would’ve been about 28ml. And that kick-started this refreshing club soda-style drink.” 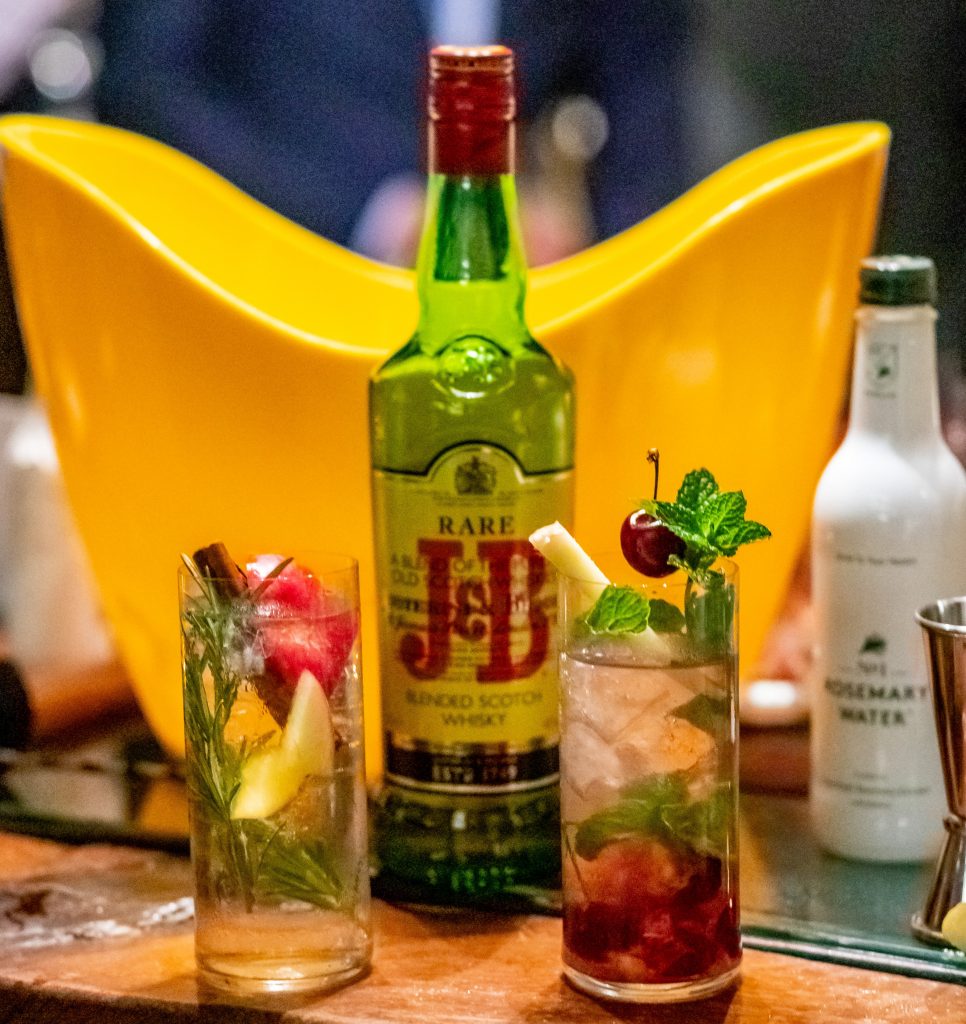 Among the first to tackle the trend was Scotland’s J&B Rare. Made with 42 different whiskies, the blend was created first and foremost for club soda-style drinks, says Ridley. “If you were going out for dinner or having a lavish dinner party, you want to spoil your palate for all these fantastic wines that you were going to be drinking. At the time, people weren’t drinking single malt, largely speaking they were very peaty, smoky, heavyweight whiskies. The idea was to create eminently lighter, more delicate, and more refined.”

Such was its success in the UK, parent company Justerini & Brooks rebranded the bottling J&B Rare and took it to America just in time to toast the end of Prohibition. US drinkers loved it, and soon the brand found a real foothold in New York and Las Vegas, becoming a firm favourite among The Rat Pack – particularly Dean Martin. The Highball spread to Japan, where it became a striking vessel for the nation’s light, delicate whisky style and was adopted as a cultural icon., Japan’s bartenders refined the signature serve with crystal-clear ice and delicate glassware, paving the way for the modern Highball you find on menus in bars around the world today.

But I digress. Back to the Hard Seltzer serve. You don’t need a fridge full of flavoured soda to execute your own perfect version of the drink. In fact, Ridley and Harrison recommend giving the dodgy artificial-tasting stuff a wide berth in favour of making your own flavoured sparkling water seltzer at home. It’s easy enough – just infuse fruits, vegetables and other tidbits with sparkling water in one of those lovely glass barrels with the tap attached. 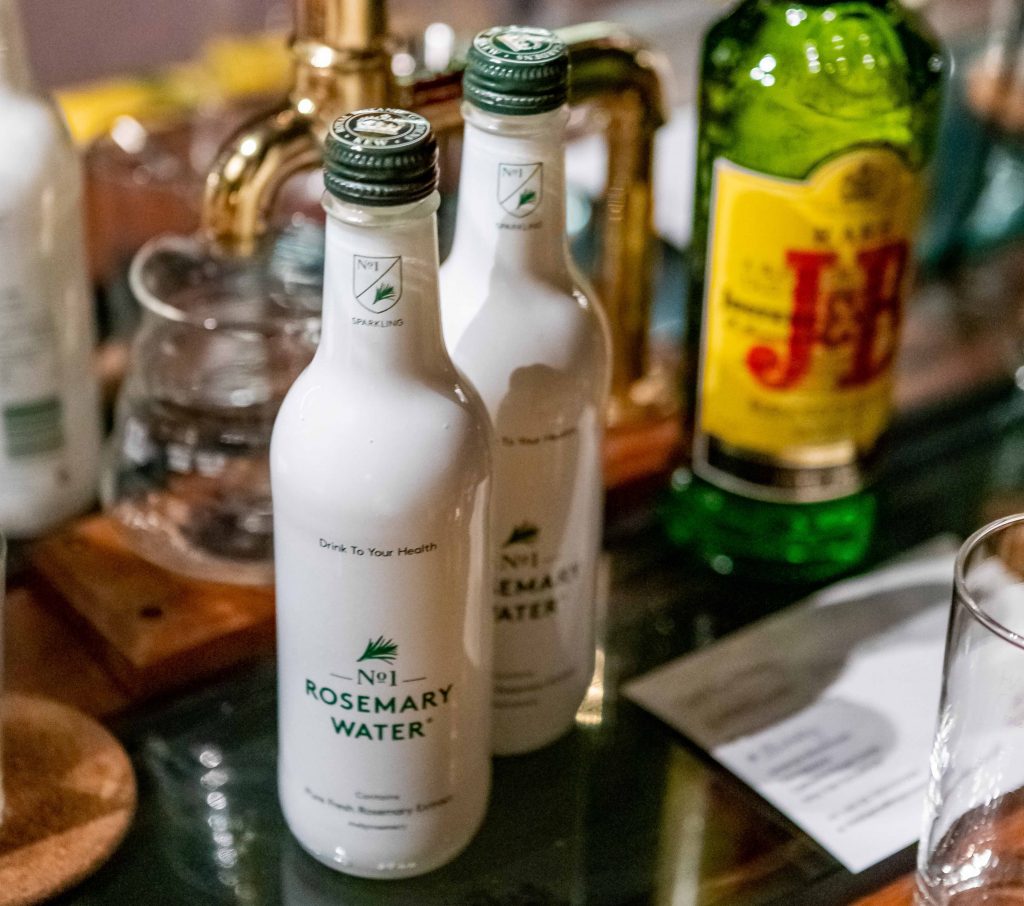 You can buy ready-made flavoured water, or make your own

Flavour-wise, you could go for a refreshing cucumber and mint combination, spice things up with ginger, apple, and cinnamon, or keep things simple with a classic lemon and lime. However, if you don’t fancy making your own and would rather stockpile the bottled stuff, a handful of health-conscious flavoured sparkling water brands are starting to crop up in the UK, for example No1 Rosemary Water (which has also started branching out with fizzy versions of other tasty herbs like fennel).

You’ll also need bitters, preferably fruit-flavoured – peach, orange, lemon, rhubarb, plum, grapefruit, whatever you’re feeling – and a handful of tasty garnishes to really set the drink off: lemon zest, rosemary, cherry, or mint, for example. Ready to jump on the Hard Seltzer trend? Here’s the recipe for the Rosemary Hard Seltzer to get you started:

Fill a highball glass with ice. Add J&B Rare and top with Sparkling Rosemary Water. Stir slowly and garnish with a fresh sprig of rosemary. Could not be simpler.