Henry Jeffreys
No Comments on Cocktail of the Week: El Diablo

Today we’re making a devilishly refreshing long drink with Maestro Dobel Diamante Tequila, cassis and ginger beer. It could only be El Diablo!

What do you drink with Mexican food? I was pondering this over the weekend when my wife was preparing some of her favourite dishes. They included carnitas (slow-cooked spicy pork), blacks beans, homemade corn tortillas, hot salsa, and her secret recipe guacamole (it has mango in it!). And there were only three people eating. Reader, I made a bit of a pig of myself.

Refreshing and full of flavour

The traditional accompaniment to such feasts is either local beer or a Margarita. Both are good in their way but they also have significant drawbacks. The big name Mexican lagers like Corona or Sol aren’t exactly burdened with flavour. They are certainly refreshing, but then so is water. If it’s available, I’ll have a Negra Modelo, a rich malty German style Mexican lager but sadly it’s not that widely distributed.

Margaritas are delicious, of course, but they are strong and on a hot day with spicy food, slip down just a little too easily. So you want something that’s as refreshing as beer but as delicious as a Margarita.

After a bit of a fiddle I came up with what I call the Blood Orange Margarita. It involves adding one part blood orange juice to the two parts Tequila, one part triple sec and one part lime juice. Then serving the whole thing on the rocks with a generous splash of soda water. Very nice.

Another great long drink with Tequila is El Diablo. It blends Tequila with ginger beer and some sort of fruity syrup or liqueur. The drink was probably created by the godfather of Tiki, Victor Jules Bergeron Jr, aka Trader Vic. There’s a recipe for something very similar called the Mexican El Diablo in Trader Vic’s Bartender’s Guide (1946).

His version calls for gold Tequila but you could fancy it up with a wood-aged Tequila like a reposado (two months ageing) or an añejo (at least a year in barrel), or you could go a bit wild by using mezcal with its distinctive smoky aroma.

I’m using the absolutely delicious Maestro Dobel Tequila. It’s made from 100% blue weber agave and oak-aged before being filtered to remove the colour. It’s about the smoothest thing on the planet. But smooth doesn’t mean bland. In fact, it’s just delicious sipped on the rocks with a piece of orange.

There’s quite a few Mexican brands who claim to have invented this style, made in a similar way to Bacardi and other white rums. I’m not going to wade in there only to say that this is superb. The brand is owned by the Beckmann family who also own Jose Cuervo, but Maestro Dobel is independent. 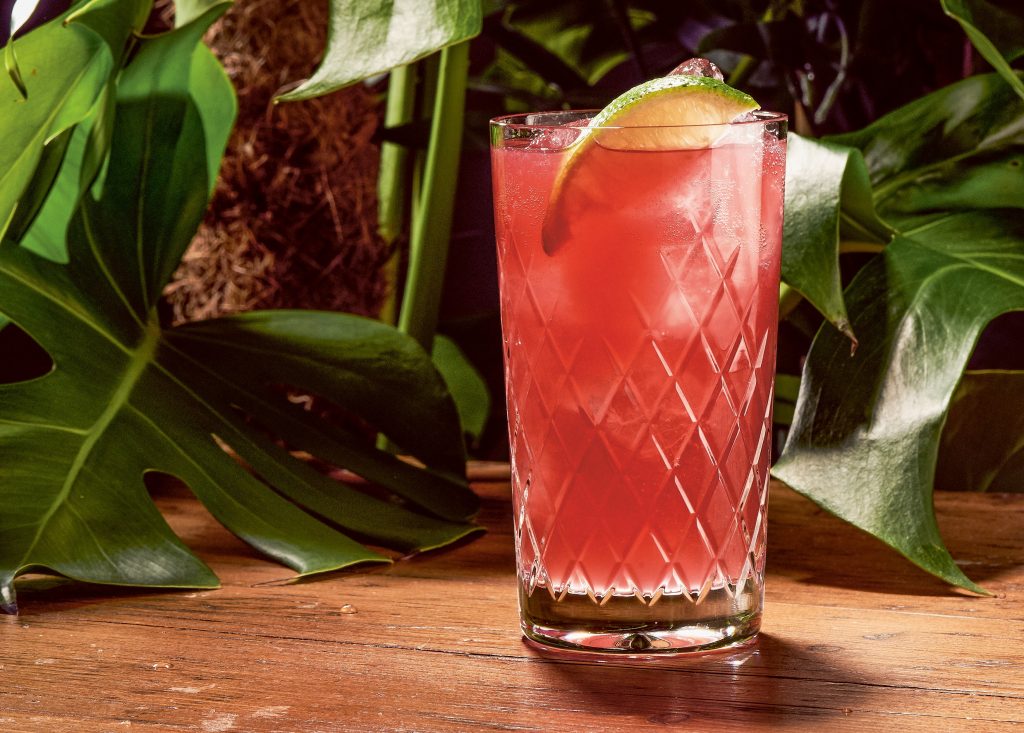 In my Cocktail Dictionary (still available from all good bookshops, people) I used grenadine to make an El Diablo. And very nice it was too but Trader Vic’s recipe uses creme de cassis as does Tristan Stephenson whose forthcoming book on home cocktailing is proving quite a hit in our household. The recipe below is based on his.

He writes: “El Diablo is a long refreshing cocktail that plays off two of Tequila’s boldest tasting notes: earthy piquancy and zingy fruit… El Diablo is one of those drinks that makes you salivate just thinking about it.” Too right.

Instead of cassis, you could use Chambord, creme de mure or even sloe gin for an Anglo-Mexican mash-up. If you like it a bit punchier, I’d highly recommend adding a spoonful of mezcal on the top. Oh and for the full diabolical effect, put two wedges of lime in the top to make the horns of the devil.

Here’s how to make El Diablo

Squeeze the lime into the bottom of an ice-filled Highball glass and drop it in. Add the Tequila and creme de cassis. Stir and top up with ginger beer. Stir again briefly and garnish with two slices of lime.

Where are the older people in whisky advertising?