Beer-focused whiskies: going with the grain

Kristiane Sherry
No Comments on Beer-focused whiskies: going with the grain

A new philosophy is bubbling its way into whisky creation: ‘beer-first’ liquid. Move over maturation – drinkable wash, with a focus on grains and yeast, is moving to the fore of the conversation. Kristiane Sherry returns to explore the approach with three makers.

Whisky is a simple beast. At its heart, a mere three ingredients: grains, water and yeast. Strip back any bottling and – aside from a potential splash of E150a caramel colour – the same trio remain.

But of course, as whisky lovers, we know there’s so much more to it than that. From process to philosophy, a multitude of approaches means endless flavour options. Cask type and maturation length, as well as any finish, have long dominated the narrative around sensory profile. But that’s only part of the story. Increasingly producers are shouting about the effects of grain processing and fermentation, too.

This is certainly the case with storytelling around ‘beer-first’ liquid. Broadly, every whisky is made the same way. Process your grains, ferment, distil, and then mature. Traditionally, the ‘wash’ – the alcoholic liquid produced during fermentation – was made in a way to max out efficiency. It wouldn’t taste like a beer, despite technically being one. The focus would be on consistency and yield, creating as much alcohol as possible, as well as maintaining a distillery character. Some producers are eschewing this approach and instead honing in on making a wash that’s like a drinkable, sometimes deliciously so, beer. 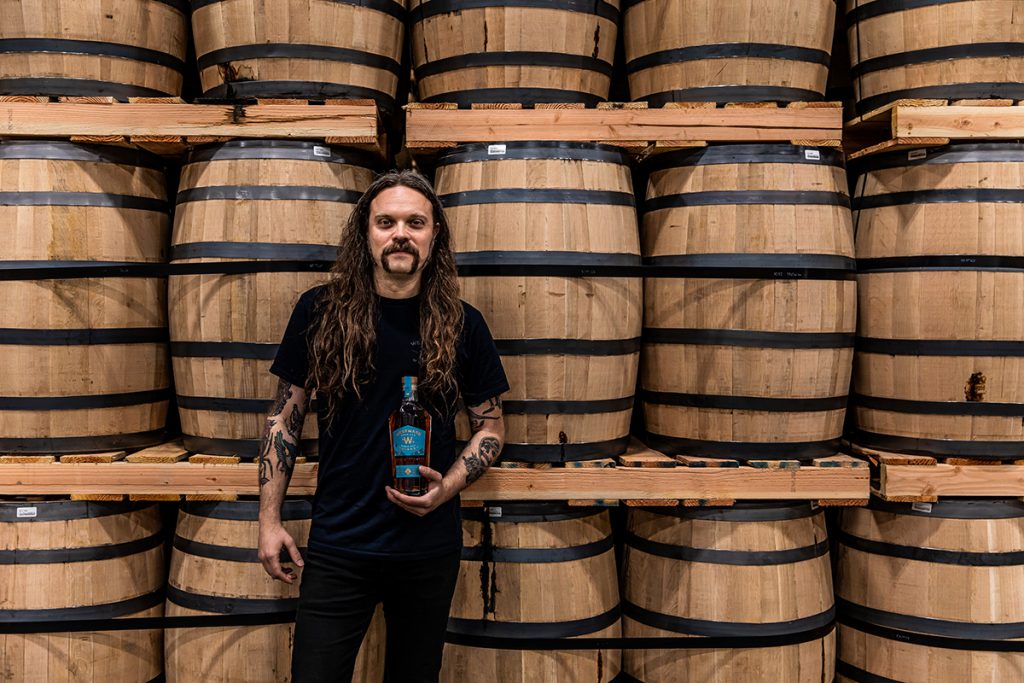 “As a brewer, I came to this recognition early on,” says Jason Parker, co-founder and president of Seattle-based Copperworks Distilling Co. “Craft beer started with, and for the most still has a focus on, flavour over efficiency. Traditional whiskey production is, for the most part, focused on efficiency, with the flavour luckily being not too bad.” A brewer since 1989, he applies the craft focus now he makes whiskey, too.

For him, this looks like processing barley in a similar way to strong ale. By using higher temperatures you lower the alcohol yield later on, but you lock in flavour thanks to Maillard reactions (the same thing that gives browned food its flavour) and caramelisation.

“Almost every Scottish distiller I’ve met tells me that malt doesn’t matter, and that it’s just a source of sugar to feed the yeast,” he argues. “Obviously, there’s a big opportunity to explore what the traditional distillers are simply not interested in, and can’t be interested in when in such a price-competitive market. That leaves us little guys the freedom to explore and compete on flavour, without much fear of being beat out by the big producers.”

Miles Munroe, head brewer and distiller at Pacific Northwest neighbour Westward Whiskey, takes a similar approach. “As ex-brewers, we bring that knowledge and influence to whiskey-making which produces something wholly unique, while introducing the world to what American single malt can be,” he says.

“There are many whiskey makers who will affirm that they want the majority of their flavours to come from the cask, where we are the complete opposite,” he states. “It’s so much more about grain and esters.” More on esters shortly.

“There are myriad ways to produce flavours in making spirits and we know that great beer makes fantastic single malt whiskey. It speaks of our origins, it moves whiskey into new territory and it places an emphasis back on quality ingredients.” He also kilns for longer for “more toasted and caramelised notes”. 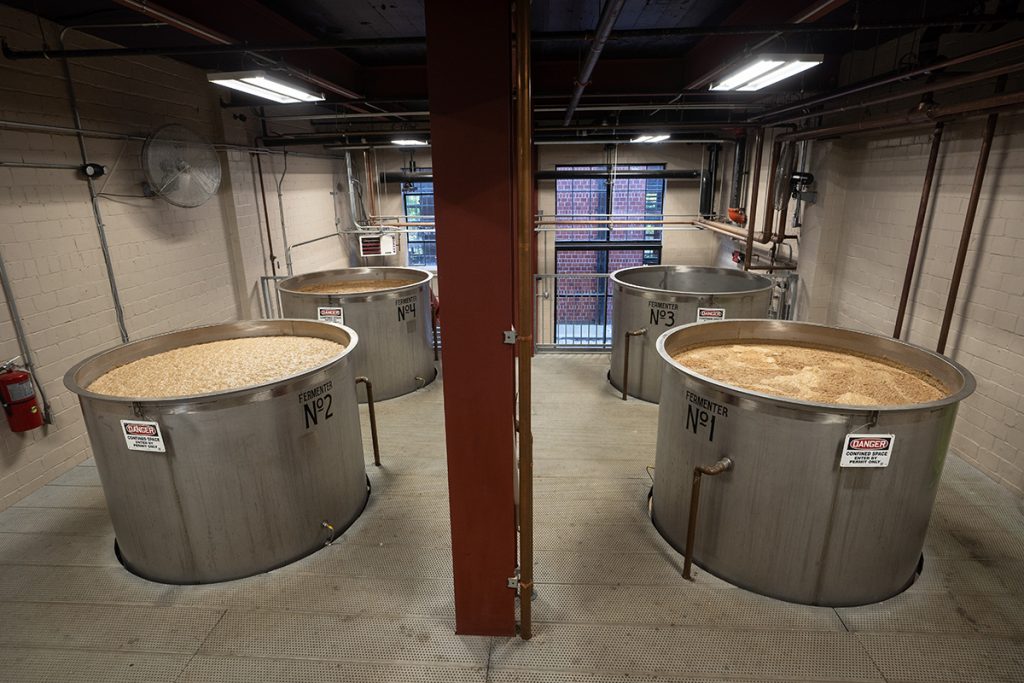 A brewing-led approach to fermentation is becoming increasingly common

So what are esters, and why are they important when taking a beer-first approach?

“Esters are organic acids that can be found everywhere in nature, and often the same esters can be found in many things we find delicious,” Munroe outlines. “Using an ale [yeast] strain produces huge amounts of esters which present as peach, apple, pear, banana, mint and many others; my favourite being ethyl hexanoate which gives ripe pineapple and is very strong in our beer wash.” Westward gently ferments for five-to-six days to really max out those esters. “That’s an eternity for most whiskey fermentations and is crucial to making flavourful single malt that has nothing to hide.”

Back at Copperworks, Parker also takes a brewing-led approach to fermentation. “We boil our wash to sterilise it and deactivate reducing enzymes. This gives us the same starting solution you’d expect to see in a craft brewery,” Parker explains. Once that’s ready, he only works with brewers’ yeast, as opposed to distillers’ yeast, which is prized for its efficiency in converting sugar to alcohol, and how stable it is. 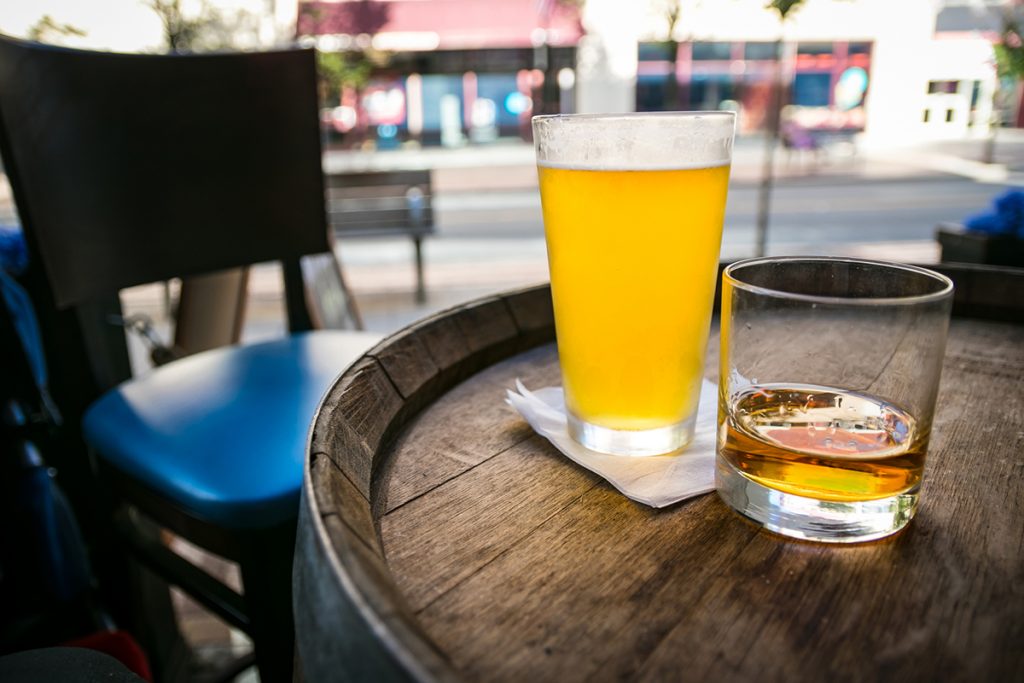 Beer and whiskey are closer than you might think, and some are bridging the gap even more

It’s all well and good crafting the perfect beer – but what’s the point when distillation can strip so much flavour out? What about maturation?

“While true that higher attenuation leads to more alcohol produced, at what cost?” He argues. “Complex sugars, such as maltose and maltotriose, which add to the body of a beer, are reduced and converted to alcohol by most distillery fermentations. Not at Copperworks.” Instead, the team uses double pot stills in a specific way to preserve the resulting creaminess.

Munroe acknowledges that without care, much of this precise flavour can be lost. To keep the beer character, Westward uses custom pot stills with very short columns, reducing the reflux which effectively lightens the spirit. “By having very little refinement we preserve so many of the flavours created during fermentation and that’s all transferred into robust new make spirit.” For him, maturation just deepens the esters. “It’s a key point for Westward because we have a fantastic environment for maturation, with four distinct seasons that never get too hot or too cold.”

But not all producers with a laser focus on raw ingredients and fermentation agree that a beer-first approach is best.

“We have no desire to make a drinkable wash – that’s not what we produce,” states Paul Hletko, founder and distiller at Illinois-based FEW Spirits. “As a mostly cereal grain distiller (we don’t make much malt whiskey), it wouldn’t make sense to make a drinkable product for our wash.” It’s a step in the process to the final product. “But we make the wash with a brewers philosophy. We make our whiskey in the fermenters more than in the barrels.”

For him, this means a Belgian beer yeast for his bourbon, something certainly not chosen for efficiency. “If we used a traditional whiskey yeast, we would nearly double our yield of spirit!” He quips.

Hletko does however think a beer-first message could help a “reticent” drinker find their way into whiskey. “I also think it can help illustrate reasons for a more dedicated or experienced whiskey drinker to try a new brand – “oh, FEW has a different approach, let me see what they’re all about.”

Whether or not producers shout about their beer-like wash, it’s clear that raw materials – both grain and yeast – need more attention when it comes to the flavour conversation. Smaller producers are carving out a niche with their point of difference, and if it results in delicious whisky, we all win.

Master of Malt @MasterOfMalt
12 hours ago
Read up on this year's spirit sales trends in @DrinksRetailing News! Whisky is doing well, and we've recorded big increases in the Tequila and rum categories, with some superb single cask bottlings, and high-end releases hitting the market.
https://t.co/eyxBPVWGOJ
View on Twitter
4
9

Cocktail of the Week: the Daiquiri

Discover old and rare whisky with us