Henry Jeffreys
No Comments on anCnoc: the single malt from Knockdhu distillery

It’s not the best-known or the easiest to pronounce but anCnoc makes an extremely delicious Speyside single malt which you should get your tongue around. We talked to distillery manager Gordon Bruce to find out more.

There’s a received opinion in the wine world that certain French wines are popular because they are easy to pronounce for English-speaking people. Which is why people order Sancerre instead of Menetou-Salon or Chablis instead of Pernand–Vergelesses.

This is rather turned on its head by Scotch whisky which proliferates with Gaelic names like Craigellachie, Glen Garioch, and Bunnahabhain which non-Scots whisky fans have to learn to pronounce. In fact, it’s part of the initiation into whisky having your pronunciation gently corrected when visiting distilleries. Even the Scots sometimes get it wrong. I remember the visible wince from Dr Bill Lumsden when a brand ambassador pronounced Glenmorangie with the emphasis on the third syllable. Such a faux pas!

Despite years of whisky drinking and associating with Scottish people, there’s one whisky whose pronunciation I’ve never quite got my head around: anCnoc. In fact, I struggle to spell it most of the time. Distillery manager Gordon Bruce told me that some “people might be embarrassed about ordering it because they don’t know how to pronounce it.” But alternatively, it does make it a “talking point.” It’s the unexpected mixture of upper and lowercase letters that really throws me. The correct pronunciation is ‘a knock’, just ignore the ‘c’ in the middle, Bruce advised me. 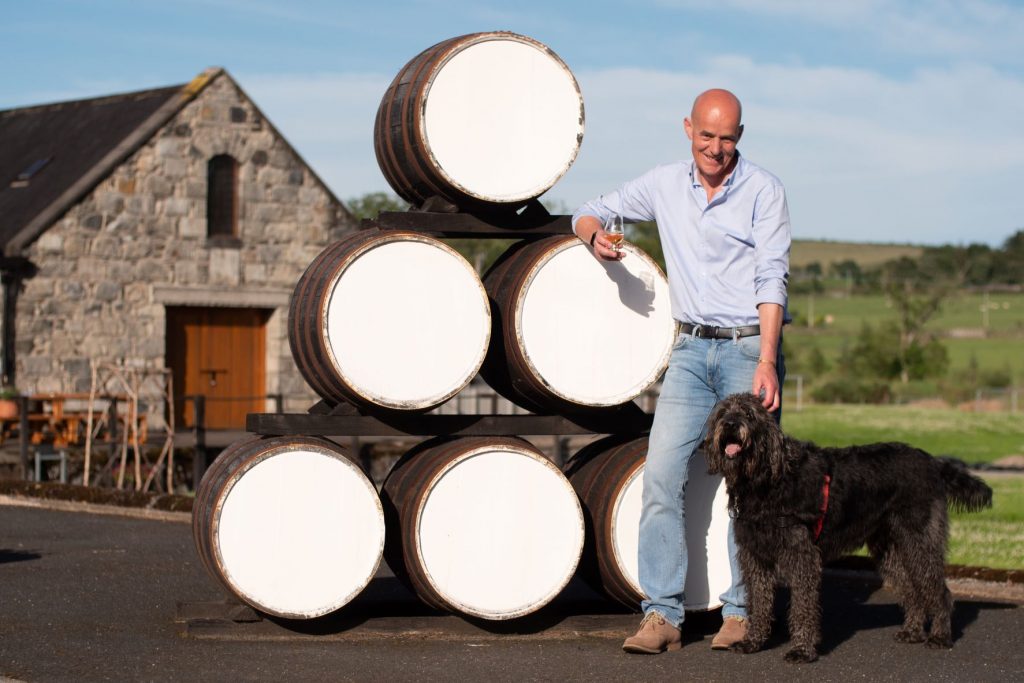 I can’t go for that, no can do

anCnoc single malt comes from Knockdhu distillery in Speyside. It changed the name of its single malt in the 1990s to differentiate it from nearby Knockandhu (which I used to pronounce ‘no can do’ like the Hall & Oates song but is actually pronounced ‘knock AN doo.’)

Knockdhu means black hill in Gaelic, it’s situated not far from Elgin in the north of the Speyside region and was founded in 1894 by John Morrison. It was mothballed from 1983 until 1989 when it was reopened by Inver House Distillers. It’s one of those absolutely perfect looking malt whisky distilleries especially on the sunny day when we visited. When the sun shines, there’s no more beautiful place on earth than Speyside. But because it’s out of the main cluster of distilleries around Dufftown and Aberlour, Knockdhu is not much visited.

Loads of fruit and wee bit of cereal

Which is a shame because it’s a real treat for whisky nerds. The production process at Knockdhu is unusual and worth looking at in detail. It’s all geared up to producing a “damn decent new make spirit with loads of fruit and a wee hint of cereal”, according to Gordon Bruce. It starts in the mash tun where the team are obsessive about removing solids from the wort. They do a very slow mash, eight hours, and a coarse filter and hydrocyclones help to keep things clear.

Gordon Bruce has been with Knockdhu for 16 years and describes his job as “distillery manager, tea boy, dog walker, and tour guide”. Before that he spent 12 years at Balblair and before that in his hometown distillery of Pulteney for six years. Both are now in the Inver House group with Knockdhu but weren’t when he worked for them. The distillery runs seven days a week round the clock. It’s fully manual and operated by a small permanent staff of six people. 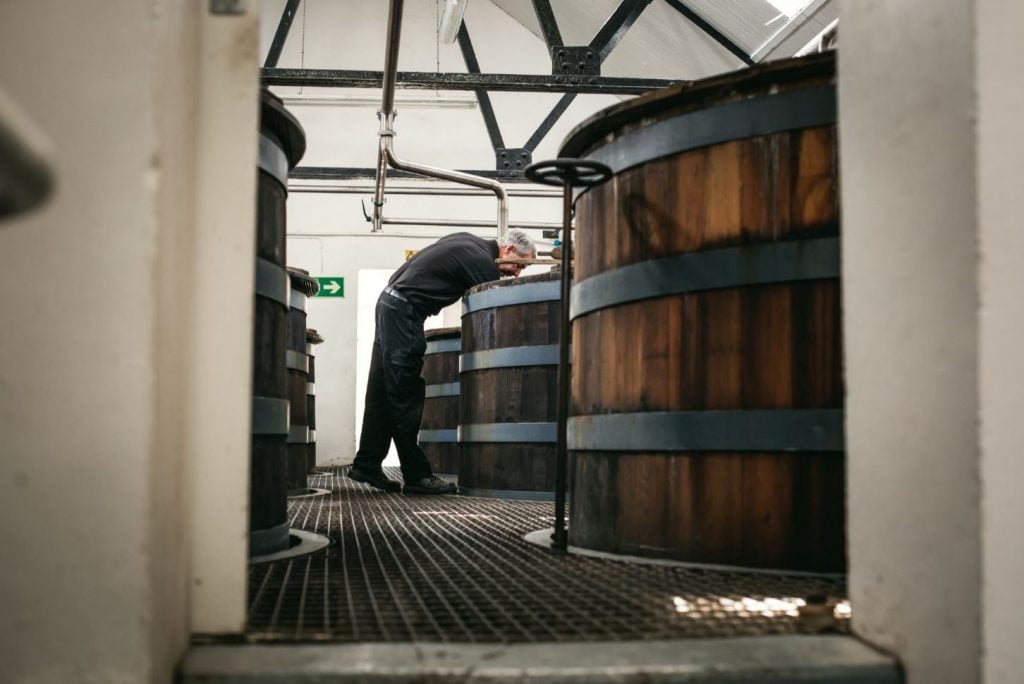 The very clear wort is then fermented for around 44 hours in Oregon pine washbacks before being pumped into separate wooden vessels. The movement stirs up the yeast cells and gets things going for another 16 hours. This is aided by a yeast strain called Mauri MG3 which is able to work at high temperatures to produce a wash that’s high in esters and alcohol, over 9% ABV.

There are two stills with boil balls in the neck to increase reflux. They have worm tub condensers but unusually both worms share the same tub. “It’s a nightmare in the summer”, according to Gordon, as the heat means the spirit won’t condense easily. To combat this, they have a shell and tube condenser on the wash still before it goes into the worm tub. Gordon thinks it’s the only distillery in Scotland with such a system. This produces more reflux but also, “all hot water needed for mash houses comes from condensers,” Gordon explained. Knockdhu was doing sustainability long before it became a buzzword.

Most of that fruity new make goes into bourbon casks with some sherry casks and then it will disappear into blends including Inver House’s excellent Hankey Bannister – for my money about the best value Scotch on the market. About 20% is sold as single malts with Britain, China and especially Scandinavia being important markets. “Sweden has paid to feed and educate my children. Thank you Sweden!” joked Bruce. But on the whole, it’s a pretty under the radar brand. The lion’s share of the group’s marketing budget goes into Old Pulteney, according to Bruce.

Most of the whisky matured at a massive site at Airdrie, home to some 600,000 casks, but there is a racked and small dunnage warehouse on site. There used to be two dunnage warehouses but they were both destroyed during a snowstorm on 8/9 January 2010, “dates tattooed on my memory,” Bruice said. The sheer weight of snow caused the roofs to fall in. Warehouse one was reopened in 2012 with a celebratory ceilidh. 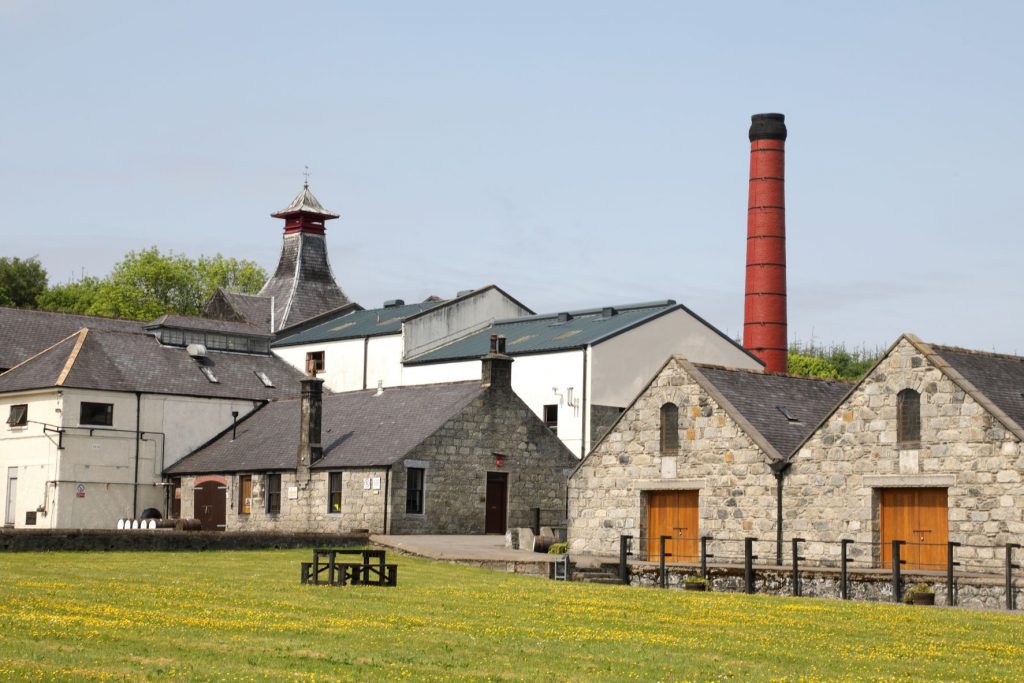 anCnoc and a hard place

You can taste that delicious fruitiness of Knockdhu from the 12 year old right up to the 24 year old (some tasting notes below). But it’s not the only trick up the distillery’s sleeve. In the past, when Knockdhu had its own maltings the barley would have been dried with a mixture of coal and peat. The maltings closed in 1969 but in 2005 the team reintroduced a peated anCnoc and it’s become an annual tradition.

They use Aberdeen peat, “it’s not like island peat. Terroir in peat is so important,” Bruce explained. It majors more on the woodsmoke rather than the seaweed/TCP type notes. The result is a beautifully harmonious melding of the classic Knockdhu sweet fruitiness with bonfires and meaty notes. Bruce said “there’s more to peat than Islay peat.” It’s perhaps my favourite of the range.

These great single malts from anCnoc are worth getting your tongue around. Altogether now say: “a knock!” Now that wasn’t so hard was it? 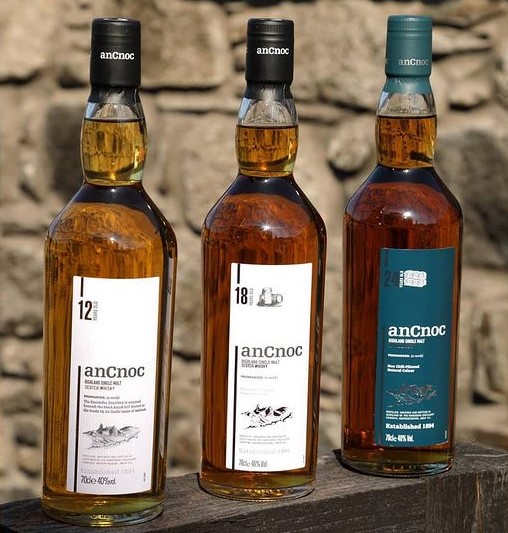 Some of the anCnoc range

16 years in American oak followed by 24 months in Spanish oak sherry casks, and bottled at 46% ABV.

Nose: Floral and fruit on the nose, peaches and pineapple, touch of toffee. Water brings out the floral notes.

Aged in a mixture of sherry and ex-bourbon casks before bottling at 46% ABV.

Finish: Long and layered finish with leather and vanilla a hint of orange peel.

Made with 40 ppm peat, this is matured in American oak casks before finishing in Spanish oak sherry butts and bottled at 46% ABV.

Nose: Bacon Frazzle crisps on the nose, with wood smoke and a smell like cold ashes from the morning after a fire.

The Cotswolds Distillery: how a New Yorker captured the spirit of the Cotswolds

Cocktail of the Week: The Strawberry & Lemongrass Blush