Master of Malt
No Comments on A journey through shochu

It’s the second and final part of our in-house educator Richard Legg’s journey through Japanese spirits. Today he looks at a spirit that can be made from sweet potato, rice, sugar, barley or buckwheat, it’s shochu!

With the wonders of Okinawa still fresh in our minds, we headed back to Kagoshima for the next phase of our journey. By this time we had noticed a few things: all the people we encountered were incredibly friendly and welcoming, the food was amazing (I mean literally everything, even a quick snack from one of the seemingly endless number of convenience stores or vending machines was a real treat), but most importantly the producers all had a huge passion for the amazing spirits they were creating and were so pleased we were showing an interest in them. They are now looking to expand their export sales as this news story explains. 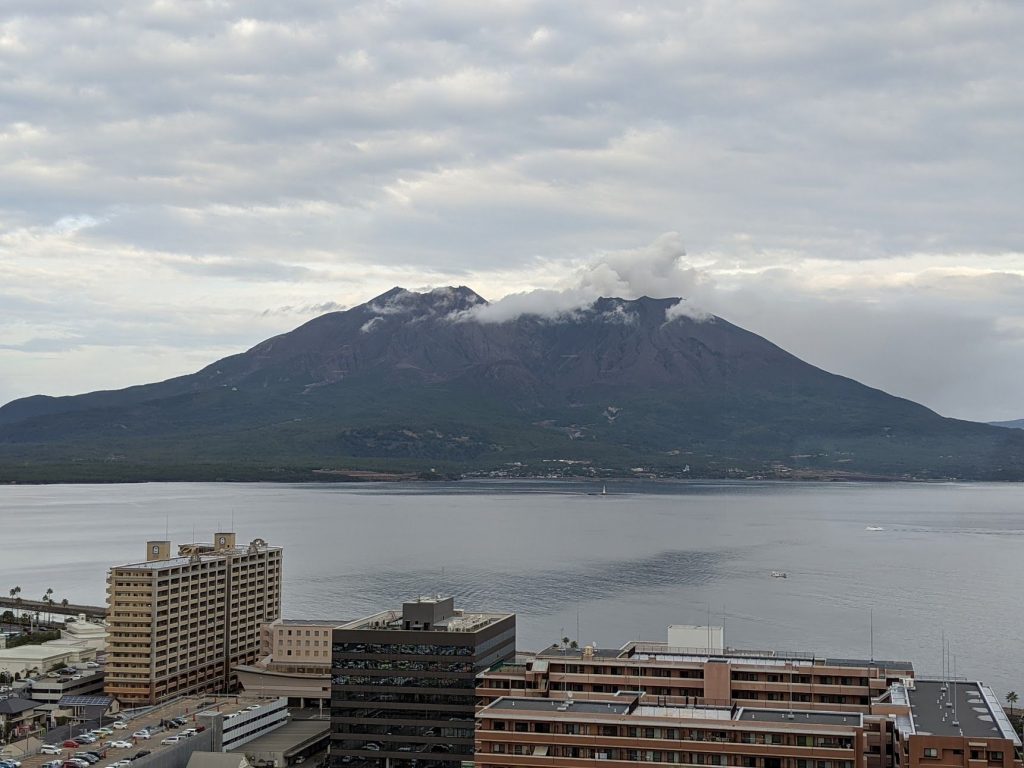 Sakurajima, it’s safe but not that safe

So to Kagoshima, a place known for a very picturesque but also very active volcano called Sakurajima, which translates to not very terrifying sounding ‘Cherry Blossom Island’. It is apparently safe and we did venture up its ashy slopes during our time there and lived to tell the tale, although we weren’t allowed to go up far though, because it’s not that safe.

As you might have gathered, sakura is a feature of this area and while it was too early to see their magnificent blooms in all their glory, we did see a glimpse of a couple of buds already starting to break. As well as cherry blossom, Kagoshima is also known for our second undiscovered Japanese spirit, shochu. Unlike awamori, shochu can be made from a variety of raw materials, not just rice.

There are two main types of shochu:

This is distilled using column stills to a high alcohol percentage. It is often mass-produced and is typically a very neutral spirit, much like vodka. Though it accounts for the majority of production by volume, very little is exported.

Sometimes erroneously still referred to as Otsuri shochu, this is almost exclusively a single distillation spirit. It is distilled to a fairly low ABV using pot stills and is much more flavourful and interesting, than the neutral Korui, and it is Honkaku which you will almost certainly encounter with shochu outside Japan. Much like awamori it usually involves the use of koji mould and a starch for the fermentation, with both atmospheric and vacuum distillation techniques used. The former gives richer more earthy flavours while vacuum produces lighter, more delicate flavours.

Owing to the differences in raw material within Honkaku shochu, there are further splits based on the main one used during production, with certain areas being more famous than others for the raw material used. These are the styles of Honkaku shochu: 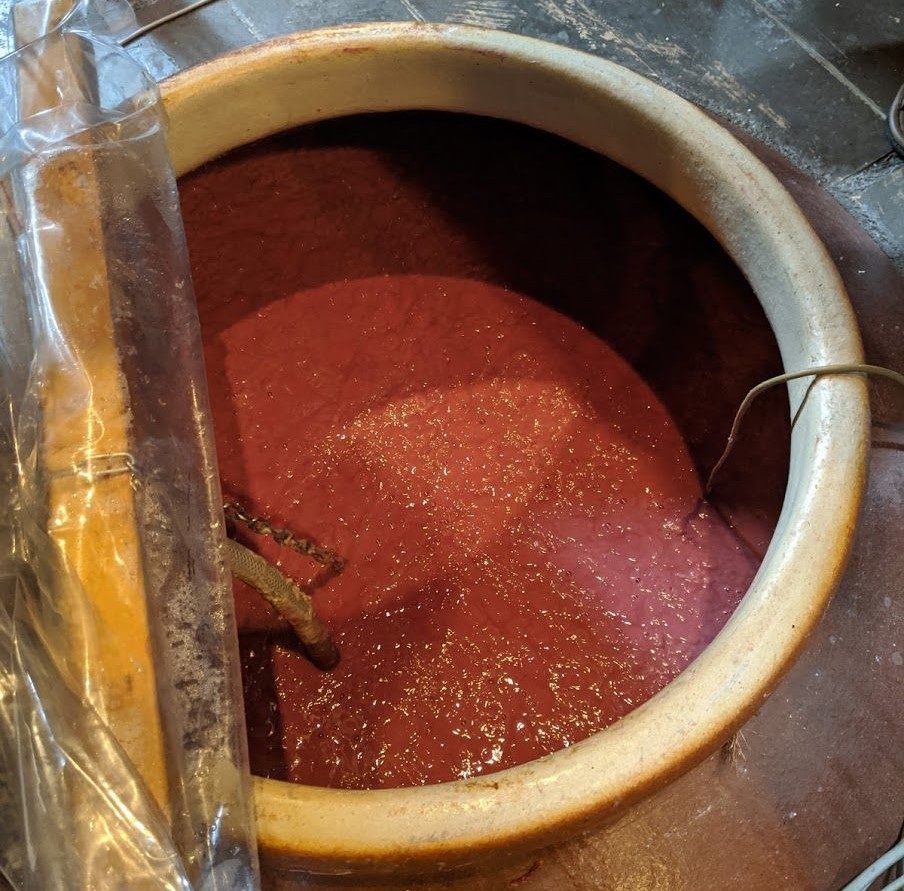 Imo – made from sweet potatoes

This is a specialty of Kagoshima, where it also has a Geographical Indication (GI) in the form of the region’s previous name, Satsuma. The sweet potatoes are often bright purple in colour, depending on the variety used, rather than the orange flesh we are more accustomed to here. It can have a soft, creamy texture and from light to really quite pronounced fruity aromas. Probably my favourite style overall. Imo shochu is also made in Miyazaki prefecture.

Mugi – made from barley

Made in a number of areas, this is soft and smooth, with often a subtle barley flavour, although this can sometimes be quite strong, more akin to barley tea. If you’ve not tried barley tea before, it’s amazing!

Kome – made from rice

This is typically made slightly further north primarily in Kumamoto, which also has a GI, Kuma. It has a soft, sweet texture with a more delicate flavour similar to those found in sake.  It can also be a richer, more full-bodied style. It does share many similarities with sake, which it is essentially a distilled version of.

Soba – made from buckwheat.

A specialty of Miyazaki, this is a fairly recent style of shochu. It typically has quite a rich texture and a mild to more pronounced nutty taste. We encountered this style the least on the trip, which was a shame.

Kokuto – made from brown sugar.

Produced on the beautiful Amami islands, which lie between Okinawa and Kagoshima. This unusual style has, as you might expect, a soft and fruity, rum-like quality. We did spend a brief amount of time on the main Amami island and were some of the highlights of the entire trip, where we got to try the amazing brown sugar and see how it’s made. Koji is still added during production despite Kokutu shochu being made from brown sugar not starch, so enzymes are not required for fermentation,

As well as the raw materials listed above, a number of other ingredients can be added when making shochu, much like gin or traditionally made flavoured vodka, for example. I tried a rather unpleasant (for me at least) green pepper shochu, as I really, really dislike green peppers. We also tried a delicious ginger shochu at the same distillery. 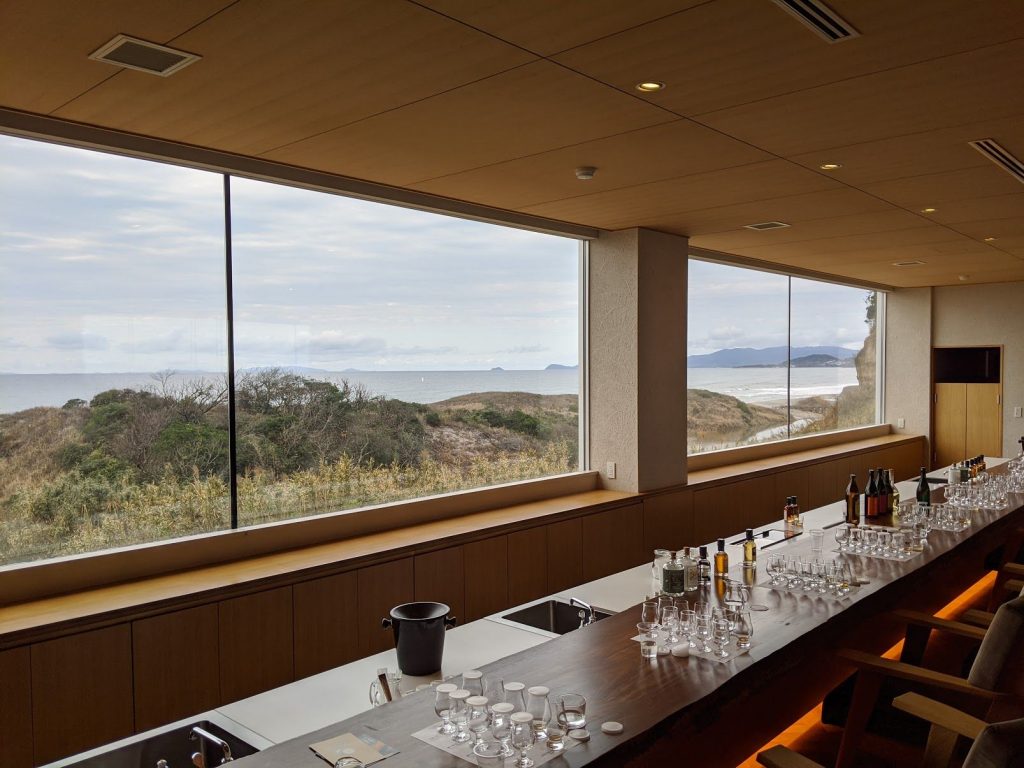 A room with a view, at Kanosuke Distillery

Despite being intrinsically linked with Japan, shochu is not a protected term (yet) and a well-known and often rather controversial Scottish beer producer who ventured into spirits, which didn’t go down too well in Japan, when their ‘shochu’ used malted cereals rather than using any koji.  Although St George makes a ‘Californian shochu’, which at least does use koji.

Koji is a type of mould that turns starch into fermentable sugar (see article part one here for fuller description). In shochu production, koji is introduced onto a starch such as rice or sweet potato. In contrast to awamori where all of the rice is treated with koji, here usually only a small amount of starch is treated, before being added to the rest of the starch later in the process.

There are three main types of koji:

White koji is the most common type for shochu production. White koji produces a fair amount of acid, but is more delicate and fragrant with fewer savoury aromas than blakck koji.

Black koji, used for some shochu, but is mainly known for awamori production. Produces lots of acid which stops bacterial growth, and has the most intense and savoury aromas.

Yellow koji is mainly used for sake production, though some shochu producers use it.  Doesn’t produce acid, so can spoil particularly in warmer climates, so favours cooler climates further north. It gives very light and elegant aromas.

So, after a whirlwind tour of southern Japan, our trip very sadly came to an end and with it the incredibly protracted goodbyes we had become so used to at every stop. Looking back on this trip now fills me with so many happy memories. I got to see this incredible country, I made several life-long friends, I ate the most amazing food, I tried the most amazing spirits, I saw the most incredible sights. These memories live on in every sip of shochu or awamori for me now and immediately takes me back to those amazing times I had in Japan.