A day in the life of a whisky archivist

Ever wondered what a whisky archivist does all day? It’s easy to think of them as static and white-gloved, poring over fusty old books in a library. And while this might sometimes be the case, the consensus from archivists at Diageo, Bacardi and Chivas Brothers is that there is much more to it.

Delving into the Diageo archive

“There is no typical day-to-day,” says Diageo archivist Jo McKerchar, who has been with the company for 15 years. The archive, in Menstrie in central Scotland, holds the records for Diageo-owned brands – from company meeting minutes to recipes – and it dates back to the 1760s. As well as photos, films, old ads and packages, the archive also holds bottles going back to 1880 in what McKerchar calls the “largest spirits archive in the world”.

She says her work ranges from education sessions and helping the innovation team, to sense checking labels and working with the legal department to research trademarks. And for the past few years, she has been delving into the history of the soon-to-be-reopened Brora distillery.

In fact, McKerchar tells a great story about visiting the Brora site, shortly after she was informed of Diageo’s plans to reawaken the facility. “We were looking around and saw some bin bags in a loft space, so I opened them up and found Charles Doig plans from the 1890s,” she says. “I thought, ‘I better take them with me!’.” (Doig was an important architect in the whisky world, famous for the pagoda-like ventilators on his distilleries.)

“We also have the ledger from 1983, from the last time Brora was operational,” she says. “There’s graffiti in the back and notes between shifts, like if someone was off on holiday. Then it just stops and there are blank pages  – it’s quite emotive.”

Part of McKerchar’s job involves looking at these old plans and records to help ensure the next incarnation of the distillery remains true to its past. 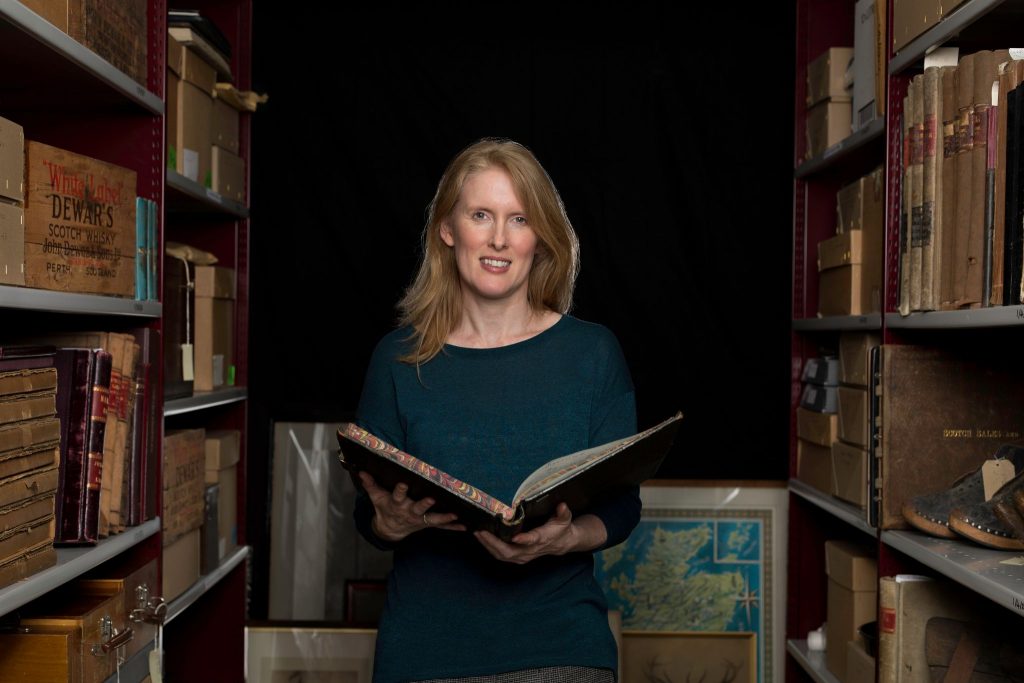 Jacqui Seargeant who works with the rich Dewar’s archive

Drams of future past

And while preserving the past is important, archivists play a big part in inspiring the future.

“We spend a lot of time working with our marketing teams or packaging designers, to find the things that might inspire a new product, a label, or a bottle shape,” says Jacqui Seargeant, global heritage manager & whiskies archivist at Bacardi. “One of the most exciting things for us is to see a bit of history brought back to life, but with a modern twist.” She gives the example of the Dewar’s White Label bottle which includes the founder’s signature taken from an old financial document from 1860.

In Strathisla, Chivas Brothers archivist Chris Brousseau shows off a lineup of Chivas Regal bottles dating back to 1909. “Design agencies come to the archive for inspiration, it’s not just a case of them improving on the most recent bottle, they can see the key parts of that brand going back more than a hundred years.”

Which brings us to an important question: Is it the archivists that inspire new products or does the marketing department ask for authentication on an existing idea?

“It can happen both ways,” says Seargeant. “We share our fun discoveries that we think may be useful, as well as presenting stories and themes from our history to groups within the company. The marketing team can be inspired by something random and unexpected, and they do also come to us for ideas when they are developing their packaging for a specific product or creating something new.” 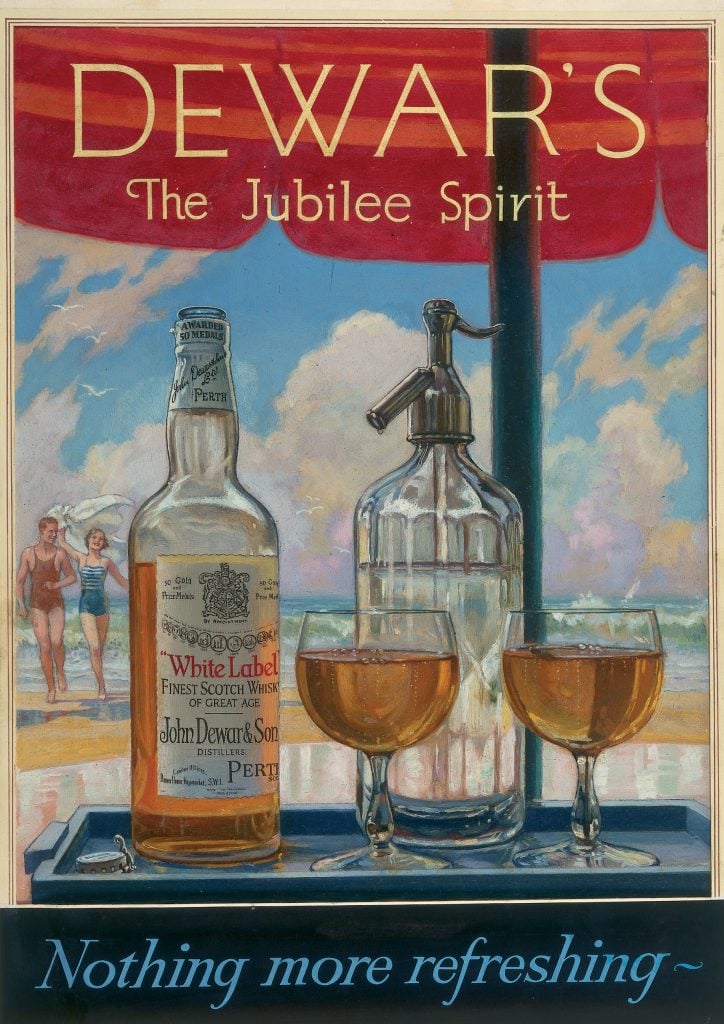 She gives the example of a random discovery that led to a campaign around the whisky highball serve. “I discovered during some research that one of the founders, Tommy Dewar, had invented the Highball cocktail back in the 1890s, and our company even trademarked the words,” she says. “The Highball has ever since been a hugely popular Scotch whisky serve, and the marketing team were able to use the personal brand story to give us ownership of the highball serve, so it wasn’t just ‘another’ Highball.”

At Chivas, Brousseau points to the recent The Glenlivet Illicit Still release. “The marketing team wanted to do a series of limited editions based on original stories for The Glenlivet,” he explains. “Se we started looking at the history and thought about starting before distilling at The Glenlivet was legal. We came up with the concept of The Illicit Still – we knew [founder] George Smith was distilling before he got his licence in 1824. And part of the archive is being able to tell the story of illicit distilling in the 1820s and about the smugglers trails – all stories that can be used for the copy and the packaging.”

And according to Brousseau, we can expect another expression from the limited-edition series “shortly”. 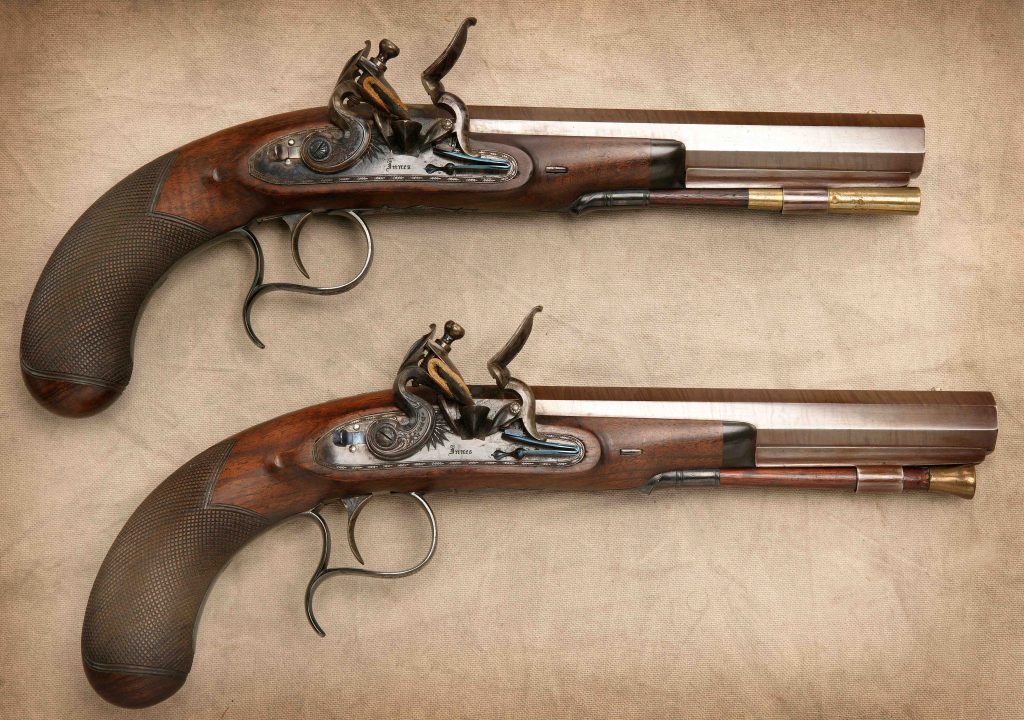 The actual pistols belonging to George Smith of Glenlivet

As we chat about The Glenlivet, the story of George Smith becoming a legal distiller throws up the subject of weird and wonderful things that end up in the archive. “These are George Smith’s pistols,” says Brousseau. “When he became the first legal distiller, the laird of Aberlour gave him these hair trigger pistols to protect himself because his neighbours had threatened to burn down the distillery with him in it.”

At Diageo, McKerchar’s collection of weird and wonderful things includes a great photo of Carsebridge, when women stepped in to run the distillery during world war one. “They all look so serious!” she says.

“I also love the old dramming stories,” adds McKerchar. “There’s a great one about using salad cream bottles to get whisky out of the barrels – apparently they are a good size for bung holes.”

For Bacardi’s Seargeant, the most bizarre find may be an 1897 patent for branding the tyres of bicycles and cart wheels with ‘John Dewar & Sons’, so that the company name would be imprinted on the streets. “We don’t know if it was ever used, but I know our marketing team would like to try that!” she says.

“Our archives act as corporate and cultural memories, the original records can bring to life a world which disappeared long before any of us were born,” she says.

And no doubt these archives will remain long after we’re gone.