The land of fire and ice: Icelandic spirits part one

Annie Hayes
No Comments on The land of fire and ice: Icelandic spirits part one

From dramatic glacier-cut fjords to lunar-like lava fields, cascading waterfalls to black sand beaches, Iceland’s surreal and mesmerising landscapes have been shaped by the forces of nature over millions of years, all the while remaining relatively untouched. In the first instalment of a two-part series, we explore how the country’s natural resources and Viking history have shaped the Icelandic approach to making spirits…

Located in the tiny fishing village of Borgarnes – approximately 75km north of capital city Reykjavík – William Grant & Sons-owned Reyka fired up its stills for the first time in 2005, becoming Iceland’s first (legal) distillery in the process. It was shortly followed by 64°Reykjavik Distillery, a family-owned operation in the town of Hafnarfjörður, around five miles south of the capital. Then came Foss Distillery, in a town called Kópavogur, which lies immediately south of Reykjavík. It was co-founded by chef Ólafur Örn Ólafsson, who also co-owns Dill, the first restaurant in Iceland to be awarded a Michelin star.

While spirits were being produced in Iceland prior to Reyka, they were focused on “blending rather than distilling,” explains Thorfinnur Guttormsson, sales manager at Foss Distillery (one of just three employees). “Today, Iceland has six distilleries and quite a few producers that are focusing on blending spirits. At the end of the year, there is a massive distillery being built in Sauðárkrókur where the focus is on making ethanol from whey. Once that is up and running, an estimate of 1.3 million litres of neutral grain spirit will be in local production. Very exciting stuff.”

Most stories concerning the nation’s distilling history begin with Prohibition, which came into effect between 1915 and 1989. But in order to fully understand the history of distilling in Iceland, “we have to look way back into Iceland’s rich Norse history,” says Fabiano Latham, brand ambassador for Reyka Vodka. “Iceland was settled in the late ninth century by the Vikings. In 1262, Icelanders became subjects of the king of Norway, and then in 1397, the union between the Nordic countries put Iceland under the Danish crown.” 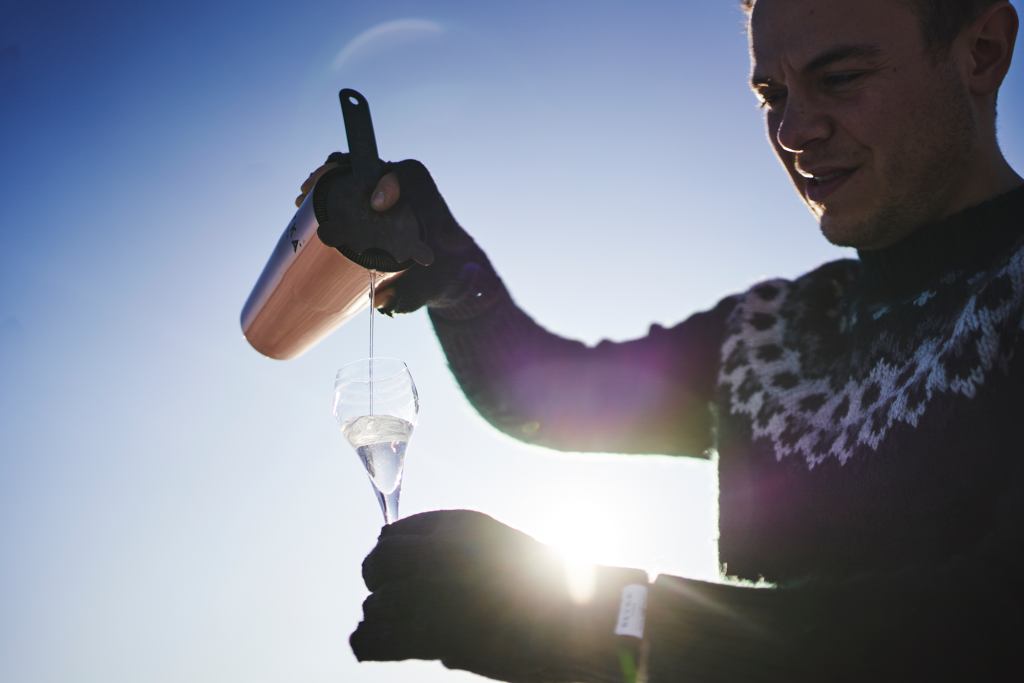 Malt and honey were freely traded between Scandinavia and Iceland, Latham continues, and Icelanders could make their own mead, and occasionally beer. “In 1602, the Danish King instituted a trade monopoly – the ‘Einokunarverslun’ in Iceland,” he says. “Only Danish merchants could trade with Iceland, and Icelanders could not trade with anyone else.” Unfortunately, mead, beer, honey and malt took up valuable space on the ships.

“Spirits, however, took up less space, didn’t spoil, and could be sold for a much higher price – no brainer,” Latham says. “The distillation techniques of the day, known as ‘burning’, meant that the resulting spirits – known as ‘burnt wine’ or ‘brann-vin’ – were often grim. One way to improve the taste was to infuse the spirits with herbs. Even in the harsh climate of Iceland, caraway was widely available, so it was used to flavour the shipments of spirits from Denmark.”

In a 1908 referendum, Icelanders voted in favour of a ban on all alcoholic drinks, effective 1 January 1915. The ban was partially lifted in 1922, when “Spanish wines were imported due to pressure from Spain,” says Snorri Jónsson, founder of 64°Reykjavik Distillery. “Spain imported a lot of salted cod from Iceland, hence the ban was lifted.” When it was modified once again to legalise spirits following a national referendum in 1935, the caraway-heavy spirit that once flavoured shipments from Denmark was launched by Iceland’s state-owned alcohol company as Brennivin; a clear, unsweetened schnapps that would become the nation’s signature spirit.

Beer with an alcohol content of more than 2.25% remained off-limits until 1 March 1989, a momentous 74 years after Prohibition came into effect (now celebrated nationally as ‘Beer Day’). The blanket ban on drinking – and making – booze may be a distant memory for most Icelanders, but certain controls still linger. You won’t see any drinks ads in Iceland, since alcohol advertising is illegal. Moreover, you can only buy bottles and cans from one of 46 state-owned off licences, called Vínbúð. 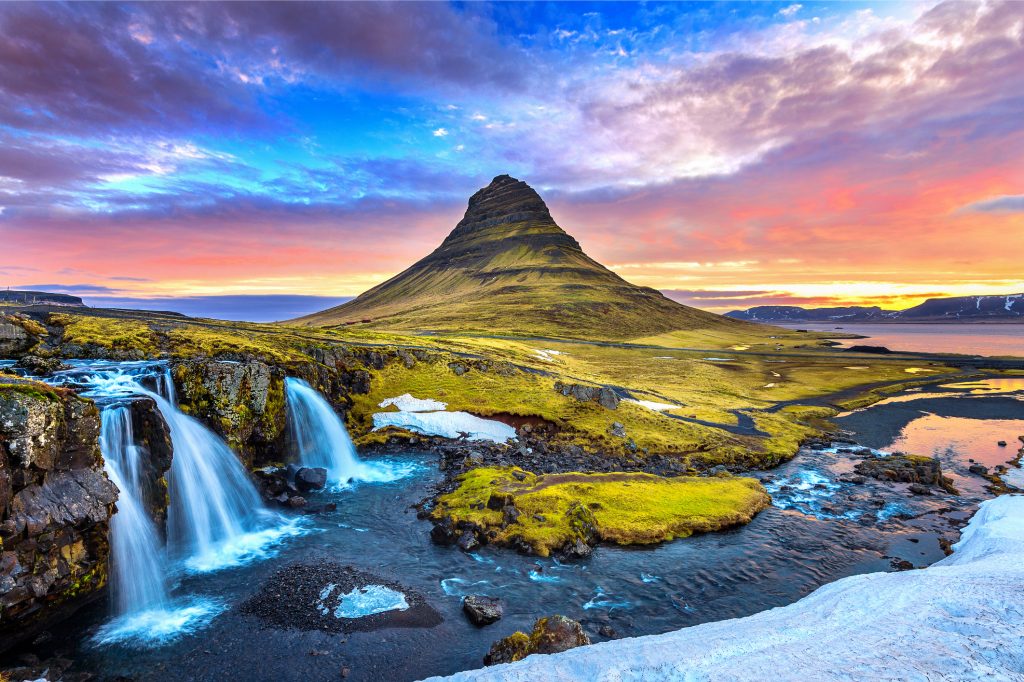 Iceland: The land of fire and ice

When Led Zeppelin stopped off to play a show in Reykjavík in 1970, frontman Robert Plant was so taken by Iceland’s natural wonders, he penned a song referring to ‘the land of the ice and snow’ with ‘midnight sun, where the hot springs flow’. The band performed it for the first time in concert six days later, and the song – Immigrant Song – went on to be one of their best-known hits.

It’s easy to see why Iceland made such a bold impression on the singer-songwriter. Home to around 200 volcanoes, one-third of all lava flows on Earth can be found in Iceland, and yet 11 per cent of the country is covered by glaciers – including Europe’s largest glacier, Vatnajökull, which is around 1,000 metres thick at its thickest point. This unique combination results in some pretty unique natural features, including hot springs, waterfalls, geysers, icebergs, basalt cliffs, black sand beaches, lava fields, fjords and more.

Icelanders are pretty good at harnessing all this natural power. Around 85 per cent of the primary energy supply in Iceland is derived from natural renewable sources, says Latham, mainly in the form of geothermal and hydroelectricity. “The geothermal energy is drawn from subterranean volcanoes,” he explains. “Water is pumped into mile-deep boreholes and then flashed into steam due to the intense heat upon re-entry to the surface. The steam powers turbines and the remaining hot water is pumped around Iceland in huge zig-zagging pipes to be used for central heating and melting snow on driveways. The hydroelectricity comes from a handful of the country’s most powerful waterfalls.” 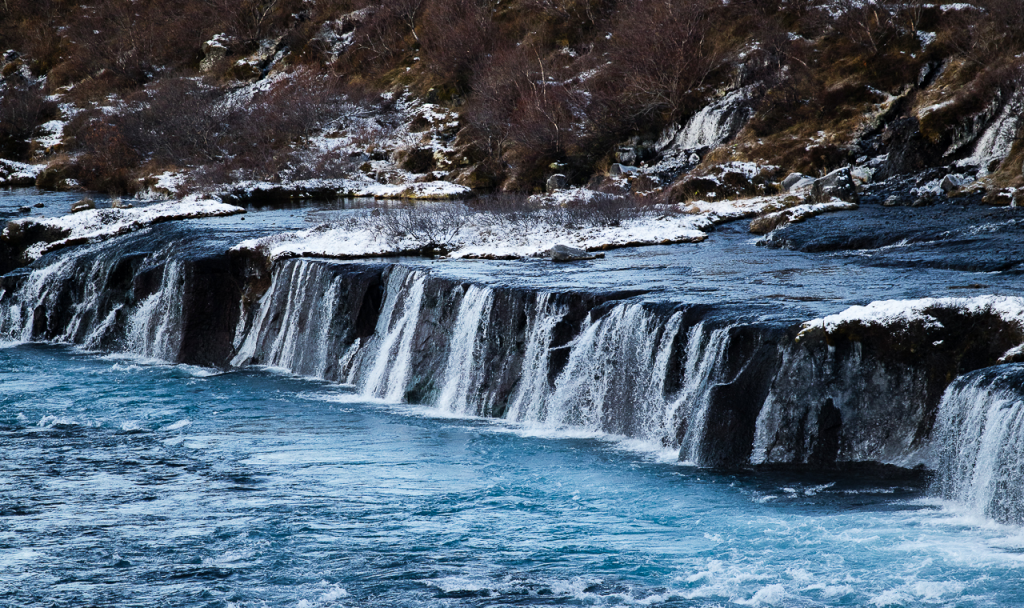 The country’s spring water is ideal for distilling

Iceland’s culture of sustainability is evident across many aspects of Icelandic life, and this extends to the spirits industry. Indeed, every distillery in Iceland uses geothermal steam to heat its stills. “The ‘Icelandic brand’ is very focused on keeping the country clean, unspoilt, natural, green and what have you,” says Birgir Mar Sigurdsson, co-founder of Thoran Distillery, which is based in a town called Hafnarfjordur approximately six miles south of Reykjavík. “So making our spirits with the smallest carbon footprint possible is always a priority.”

Given that 95 per cent of all drinking water in Iceland comes from springs, the country’s water is ideal for distilling, too. “The water in Iceland is arguably the purest in the world – and when I say pure, I also mean devoid of minerals, due to the time glacial water spends travelling underground through porous ancient lava rocks,” Latham says. “It’s ideal for distillation and bringing spirits down to their required strength, due to mother nature doing all the filtering – rather than having to treat the water at a demineralising plant.”

This is due to the surface tension of Icelandic water, says Arturo Illán Illán, global brand manager for Martin Miller’s Gin, which uses Icelandic water to reduce its (English distilled) gin to bottling strength. Surface tension refers to “the barrier between air and water, formed on the surface of water by electrically-charged molecules”, he says. The strong surface tension “inhibits the evaporation of the distilled spirit from the water” to make a softer and more complex spirit. 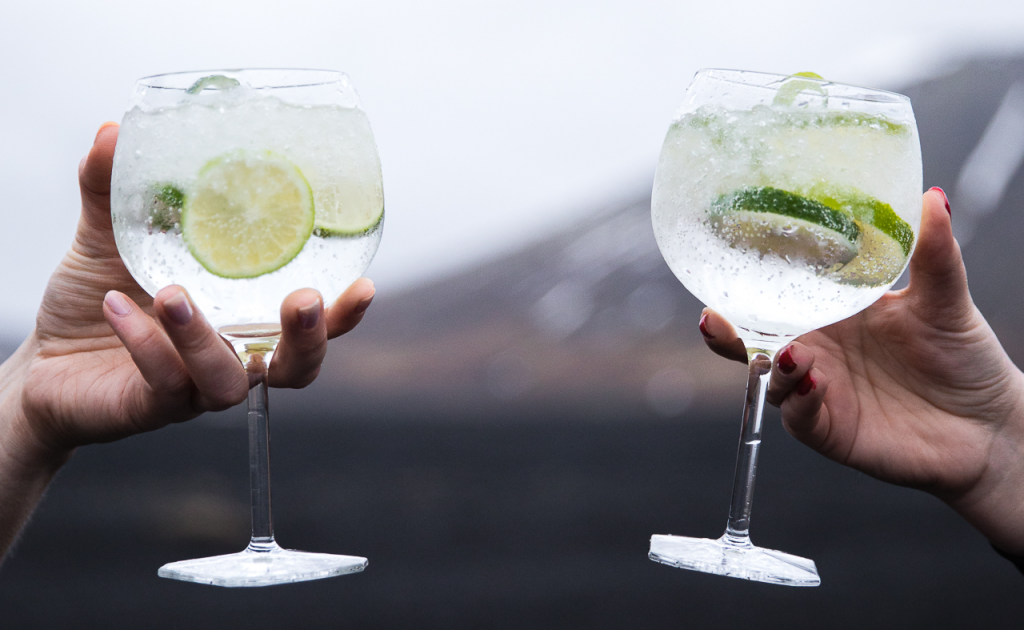 Look out for part two of our spotlight on Icelandic spirits…

Of course, water is just one aspect of the production process. There’s also the small matter of ingredient sourcing – no mean feat given the country’s wild terrain and challenging weather conditions – from hardy Icelandic barley to hand-foraged berries and herbs. In Iceland’s dazzling and yet extremely delicate ecosystem, only the hardiest plants can thrive, and often in limited quantities, as we’ll explore more in Part Two. This has made Icelanders an extremely resourceful people.

“What I really enjoy in Iceland is that it’s a barren rock,” says Óskar Ericsson, CEO and master distiller at Brunnur Distillery, producer of Himbrimi Gin. “There are so few things that grow here, so you have to make most of what you have. You never have a glut of anything. Maybe fish, but everything else is just scarce. If you find wild strawberries or blueberries or crowberries, or some reindeer moss or some seaweed, you can make great things out of it. But you don’t have a glut. You never do.”

Master of Malt @MasterOfMalt
49 minutes ago
On The Nightcap this week: @johnniewalker_ gives away 270,000 drinks, @RosebankWhisky launches its last old release before the distillery reopens, and the cheapest pint in the UK is revealed.

Rock of ages: can maturation be fast forwarded?