Tucked away in converted cow sheds by the rugged coast of Cornwall lies Southwestern Distillery, an independent spirits company established by classically-trained chef and self-taught distiller Tarquin Leadbetter back in 2013. We shine a light on the distillery as his latest creation, a Caribbean spiced rum called Twin Fin, hits the shelves…

By the age of 25, Le Cordon Bleu alumni Tarquin Leadbetter had founded Cornwall’s first distillery in more than a century, developed his flagship Tarquin’s Cornish Gin, and created the UK’s first commercially-distilled pastis (named Cornish Pastis, of course). All in all, a pretty impressive spirits CV. What started out as a relatively modest aspiration – “go surfing in the morning and make gin in the afternoon,” Leadbetter says – has evolved incrementally into a vibrant small-batch distilling operation with four stills, three flagship spirits, and a 40-strong team.

The growth has been both organic and sustainable. On a liquid level, the bottles are individually filled, corked, sealed, labelled, numbered and waxed by hand – thankfully not just by Leadbetter these days, who reckons he personally labelled around 50,000 bottles in those formative years – and the distillery has never had any investment other than the money he used to start the business, which was inherited from his grandparents. With no outlandish budgets to hire a consultant or “buy shiny German copper stills”, Leadbetter set up the distillery on a shoestring. He bought a 0.7 litre still off the internet, heating it on a cooker at home. 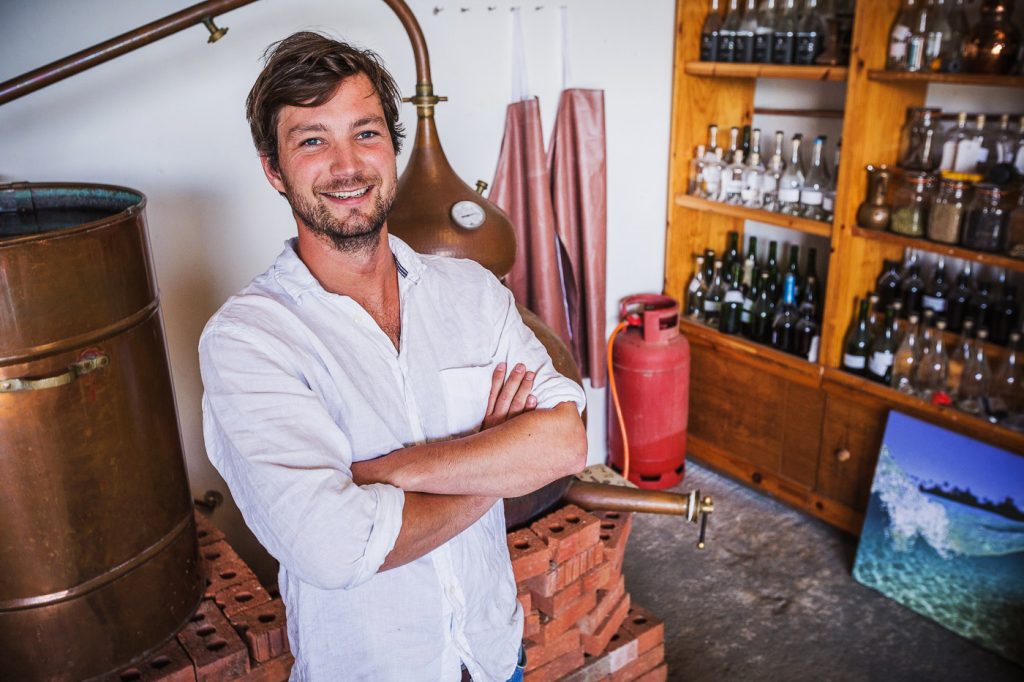 Tarquin Leadbetter with one of his little stills

“I went to the cash and carry to buy magnums of cheap vodka – which was my neutral grain spirit – and macerated lots of jars of single botanicals overnight,” he reflects. “Then I’d do these turbo batches, distilling 100 single botanicals on my cooker, which would take about half an hour to an hour each, labelling them up and blending them together. I’d add two botanicals, then three, then four, five, six, and went on this extraordinary journey of exploration.”

The more distillates he experimented with, the clearer his vision became for his eponymous gin. “I realised that one person isn’t necessarily better at smelling or tasting than another,” Leadbetter continues. ”It’s just their vocabulary; being able to articulate the flavours that they come across. By distilling everything on its own, I was able to remember those flavours, which made it a lot easier to decide where to head in terms of final flavour. It also made me a lot better at tasting other gins and working out what I liked and disliked.”

While blending skills are certainly crucial, mastering the technical aspect of distilling is of equal importance, if not greater. After all, it’s little use describing how you’d like your gin to taste if you can’t actually create those flavours. Back then, “free knowledge was generally thin on the ground”, Leadbetter explains. “Primarily, it’s been three multinationals creating this stuff for the past 20, 30, 40 years – the market’s consolidated and all of their research is proprietary”.

“The best resources for recipe ideas, cut points, temperatures; they were very much found on home-brewing sites or forums for craft distillers,” he continues. “There was this crazy journey of reading everything I could on the internet to cobble together enough knowledge, and then applying it through practice and then through trial and error to come up with the recipe.” 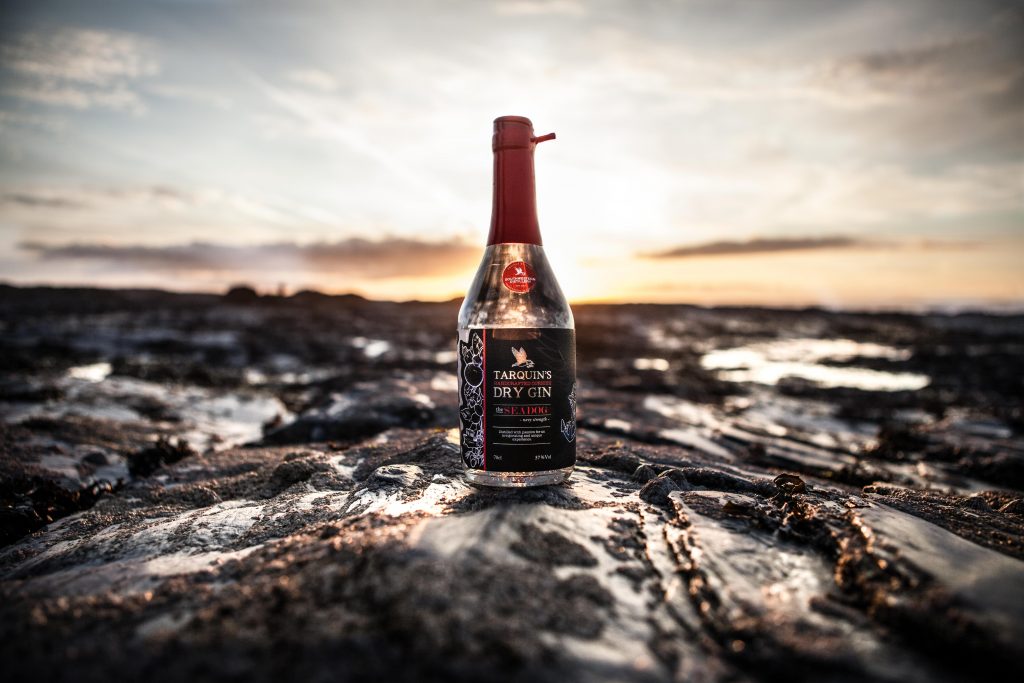 “On my journey distilling from botanicals, when it got to things like aniseed, liquorice or star anise, and they louched [went cloudy] when I diluted them down, it instantly clicked, I was like ‘oh my god, this is so familiar to pastis in France or the ouzos from Greece from holidays’ that it opened my eyes into making something else alongside gin, another botanical-flavoured spirit.” This was the genesis of Cornish Pastis.

With his gin recipe perfected and a pastis in the pastis in the works, Leadbetter acquired a 500sqft unit in north Cornwall and bought a 250-litre still to start distilling on a commercial scale. He approached gastro pubs, wine specialists, hotels and farm shops across the county, and sold the first batch on 30 July 2013 from the boot of his car.

At the end of the first month, Southwestern secured its first export order, and by the end of the first year, Tarquin’s had won a gold medal at the International Wine and Spirit Competition (IWSC). Even so, his mum was still signing each bottle. “We have these hand-written batch character tasting notes, so my mum was writing those on the bottle, my sister was helping me stick the labels on, and for the first two years I was still hand-labelling and doing lots of the bottling myself,” Leadbetter says. “It took us about 18 months to make our very first employee.”

Today, Southwestern has four stills which are spread across five units at the same converted cow sheds. “Three are exactly the same type as I first started on, where we can do small batches and be really creative, and the other is a bigger custom-built Italian still made by a company called Green Engineering, which made the stills for Bombay Sapphire’s Laverstoke Mill,” Leadbetter says.

“We’ve very much got that blend of old and new,” he continues. “We’ve still got these incredibly rustic stills sealed with bread dough*, and then on the other side of the distillery we’ve got this modern, high-tech still with its fancy flow metres that can spit out all these digital readings. All it’s really designed to do is give us information to help us mirror and copy what’s going on with the smaller stills, but on a larger scale. It’s been an interesting evolution.” 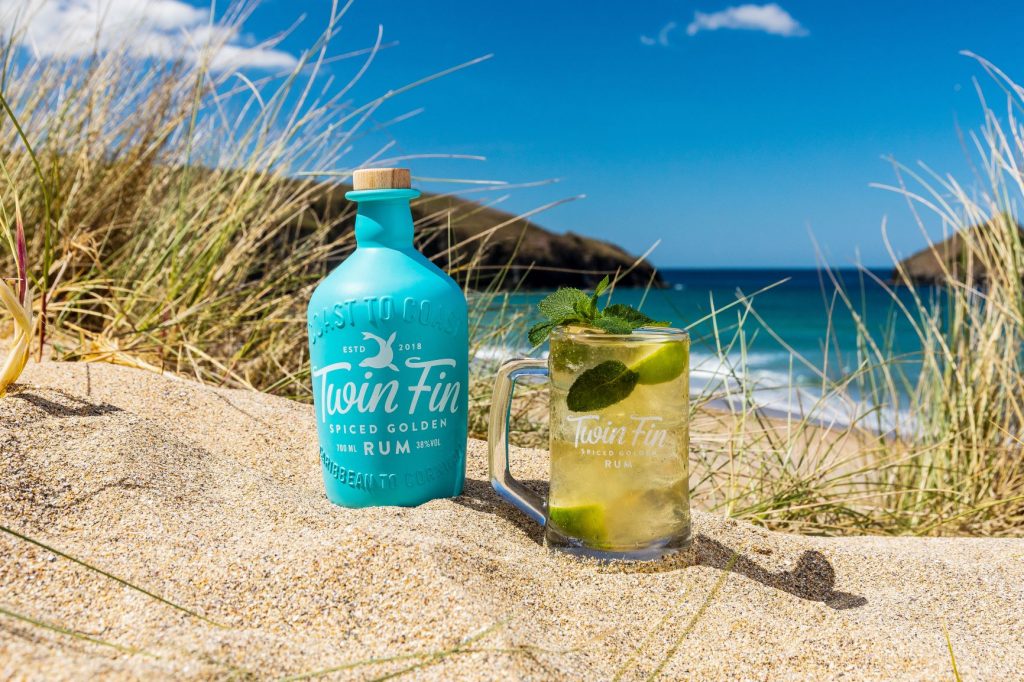 Twin Fin, a spiced blend of Jamaican and Dominican rum

A variety of limited edition gins have been added to the range over the years – including blackberry and Cornish honey, rhubarb and raspberry, strawberry and lime – and now, after two years of development, a spiced rum that goes by the name of Twin Fin is the latest spirit to expand the line-up. To make Twin Fin, a secret spice recipe is distilled in Southwestern’s copper pot stills and combined with two Caribbean rums. Then, the liquid is married with charred oak chips before bottling.

“It’s a blend of Jamaican pot still rum, which is lovely and banana-y, and Dominican Republic column still rum, which almost tastes a bit like coconut,” Leadbetter explains. “We wanted to spread our wings a little bit and use our knowledge and experience of distilling botanicals and create a rum, and the best way for us to start is by putting our own twist on a spiced creation. It’s got lots of citrus, lots of vanilla. We soak our oak chips in Pedro Ximénez sherry to add this almost Christmas cake fruit sweetness to the spirit.”

There’s no question that rum seems to finally be having its moment in the spotlight, and it appears to be led by the botanical success seen in gin. Could we see another spiced rum from Southwestern going forward? “In terms of further experimenting we might go down more of a fresh fruit approach as our gins have done, natural fruit flavours potentially, there’s space for some really fun tropical ingredients – or we might do some completely off-the-wall, wacky limited edition one-offs,” says Leadbetter.

“Traditionally rum has been quite an on-trade heavy spirit,” he continues. “Lots of people drink it in bars, but it’s never quite been the hero of the home cocktail bar, and there’s definitely more scope for that. Gin is the most popular spirit that people are buying to drink at home during lockdown, and I think rum could follow in its footsteps over the next few years – with the right products and some British experimentation also helping to drive the category.”

*A tried and tested technique whereby bread dough is used to seal the top of the still in place of a gasket. “It’s been around for probably 1,000 years, since they were using a very similar style of alembic still in north Africa,” Leadbetter says. “It’s super effective.”

Tarquin’s Gin is available from Master of Malt. Find the full range here.