New Arrival of the Week: Springbank 17 YO Madeira

Henry Jeffreys
No Comments on New Arrival of the Week: Springbank 17 YO Madeira

Today we’re toasting the arrival of a limited edition Madeira cask whisky from a distillery that still does things the old ways, Springbank in Campbelltown. Hurry, it’s not going to be around for long.

You can tell that they do things a little differently at Springbank from the marketing bumf. There’s no fancy fonts, or guff about ‘lovingly hand-selected’ and ‘hand-signed’ casks. Instead you have something that would have looked a bit dated in 1981.

Production is similarly traditional. Everything, malting, distilling, maturation and bottling, takes place at the distillery. Springbank is the only distillery in Scotland still doing this. But that’s not the end of the anachronisms: the stills are direct-fired, with oil. There’s something called a rummager inside to remove burnt bits. Springbank has its own unique distillation process with three stills. It’s a bit hard to explain so I’m going to quote from The World of Whisky book:

“The low wines, foreshots and feints are re-distilled with the next batch of low wines in an intermediate still before final distillation occurs in the spirit still.” 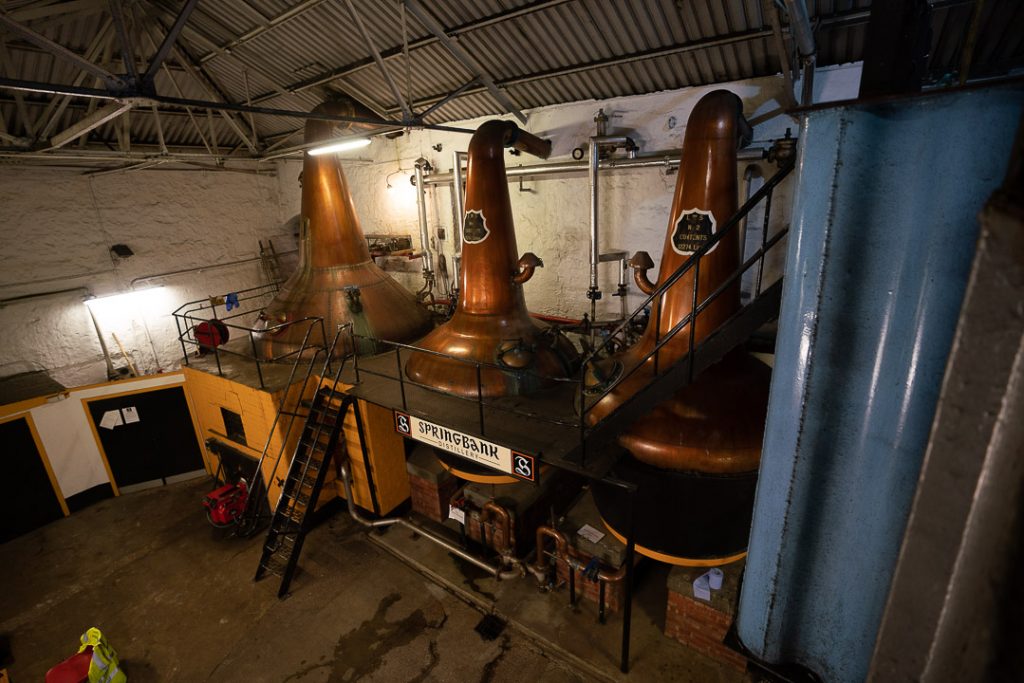 The unique still set-up at Springbank

So, the spirit is distilled 2.5 times. The wash and the spirit stills use shell and tube condensers while the intermediate still uses a worm tub.We scarcely need to say that there’s no chill-filtration or colouring used. The final unusual thing about Springbank is it has been in the hands of the same family since it was founded 1828. The current chairman of the distillery Hedley Wright is great grandson of founder John Mitchell.

At one point, Campbeltown, on a peninsula next to the isle of Arran across the water from Glasgow, was home to a staggering 34 distilleries. For much of the 19th century, it was Scotland’s whisky powerhouse, famous for its heavy oily spirit which was much in demand for blends. Things began to go wrong with the advent of the railways which saw better-connected distilleries further north, Speyside basically, stealing a slice of the whisky pie. But there were other problems: the Campbelltown style was ill-suited to lighter blends that became fashionable, Prohibition struck a blow, and there are stories about unscrupulous distillers simply making bad whisky and ruining the town’s reputation. By the 1930s there was only one functioning distillery in town.

Springbank suffered too. It stopped distilling in 1926 only to reopen in 1933. It then shut down for nearly ten years in 1979 as the Scotch whisky industry fell into another trough, and when distillation resumed, it was with only a limited production. Of course, things are very different now, Sprinbank is one of the most sought-after whiskies in the world, with old bottling attracting big money on the auction market. 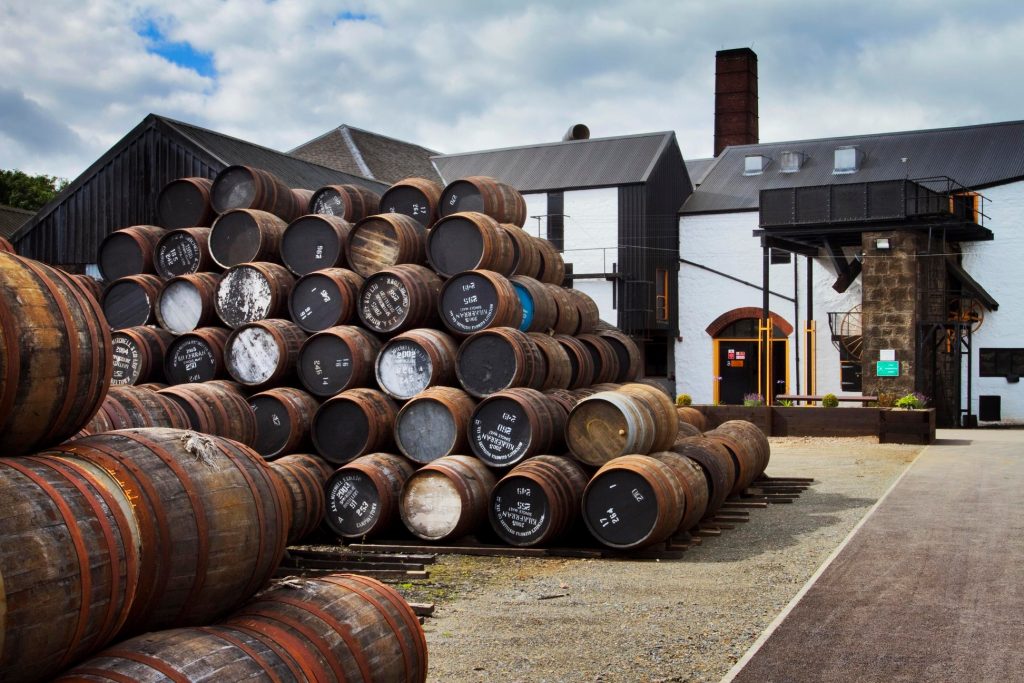 Casks outside the distillery

Things were going so well that in 2004, Springbank reopened Glengyle distillery taking the number of working distilleries in Campbeltown to three, the final one being Glen Scotia. Just to confuse matters, Glen Scotia owns the Glengyle brand so new releases from Glengyle distillery have been released under the Kilkerran name. The 12 year old is well with trying if you want some of the Springbank style at a bargain price.

Springbank itself produces three different brands: Longrow, which is heavily peated and distilled twice, Hazelburn which is unpeated and triple distilled as well as the classic lightly-peated Springbank. This week’s new arrival is a limited edition of this classic style.

Only 9200 bottles have been produced. It was aged in rum and bourbon casks for 14 years, before spending three years in Madeira casks, a total of 17 years, before being bottled in October 2020 at 47.8% ABV. That classic Springbank fullness mingles beautifully with the sweet nuttiness from the Madeira wine. It’s sure to sell out quickly but if you’re not one of the lucky ones, there are other Springbank and Campbeltown whiskies on the site.

Palate: Spicy black pepper and briny peat leads with sweet notes of caramelised ginger, salted caramel and fennel coming through, and a thick oily feel in the mouth. 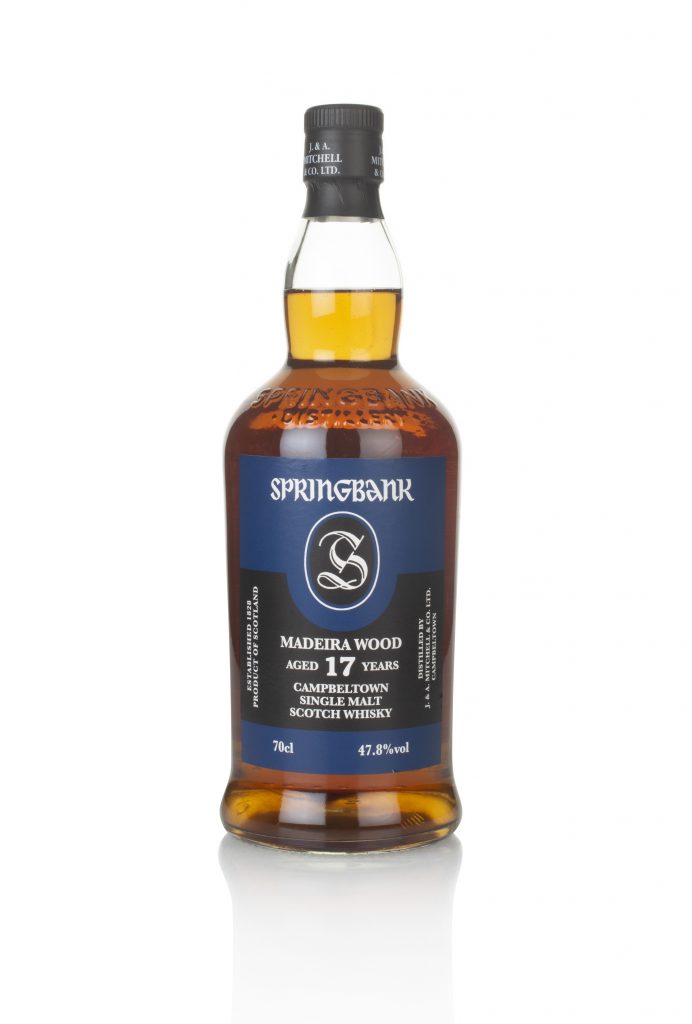 Master of Malt @MasterOfMalt
13 hours ago
Our New Arrival of the Week is the latest release from @whitepeakwhisky in Derbyshire. It’s called Wire Works Small Batch Whisky and it won’t be around for long.

Master of Malt @MasterOfMalt
18 hours ago
Festival season is in full swing, and we're celebrating with our own festival of spirits! Check out this lineup of delicious acts – they're sure to have your taste buds dancing.

Master of Malt @MasterOfMalt
22 hours ago
These summer evenings are bliss, and Balvenie 14 Year Old Caribbean Cask is the perfect single malt sundowner!