Today we talk to cellar master at Frapin, Patrice Piveteau, about what it takes for a Cognac to be singled out for the vintage treatment, and taste the very special 26 year old 1992 release.

It can be something of a culture clash when British journalists talk to French drink producers. Journalists asking increasingly specific empirical questions, will often make Gallic producers become more abstract. Our recent Zoom chat with Patrice Piveteau, cellar master at Frapin, conducted for the launch of a 26 year old vintage Cognac from 1992, is a good example. Everyone wanted to know what makes a vintage good enough to be bottled separately, is it a specific quality of the grapes? But Piveteau refused to be drawn. Yes, you need ripe grapes with plenty of acidity but he does not know for sure until they have been fermented and distilled. “I decide to make a vintage not from the grape, I have an idea during harvest, I have an idea after vinification but the real decision is after distillation. It’s not during the harvest,” he said.

To ensure that his spirits have the necessary structure for long ageing, he distills with the lees from yeast and with some of the pulp. “We are really artisan,” he said “there is no computer to tell you where to cut. From picking grapes to bottling, the main decision is only through the tasting.” Frapin produces vintages in most years. Even in years that are generally thought of as difficult like the frost-affected 1991, he found parcels of vines that made exceptional spirit: “1991 is not a good year on paper, but Frapin is on a slope, and part of the slope had no damage. It’s not a good year in general, but it is possible to find a vat from a year with a special characteristic,” he said. As the man said, it’s all in the tasting. 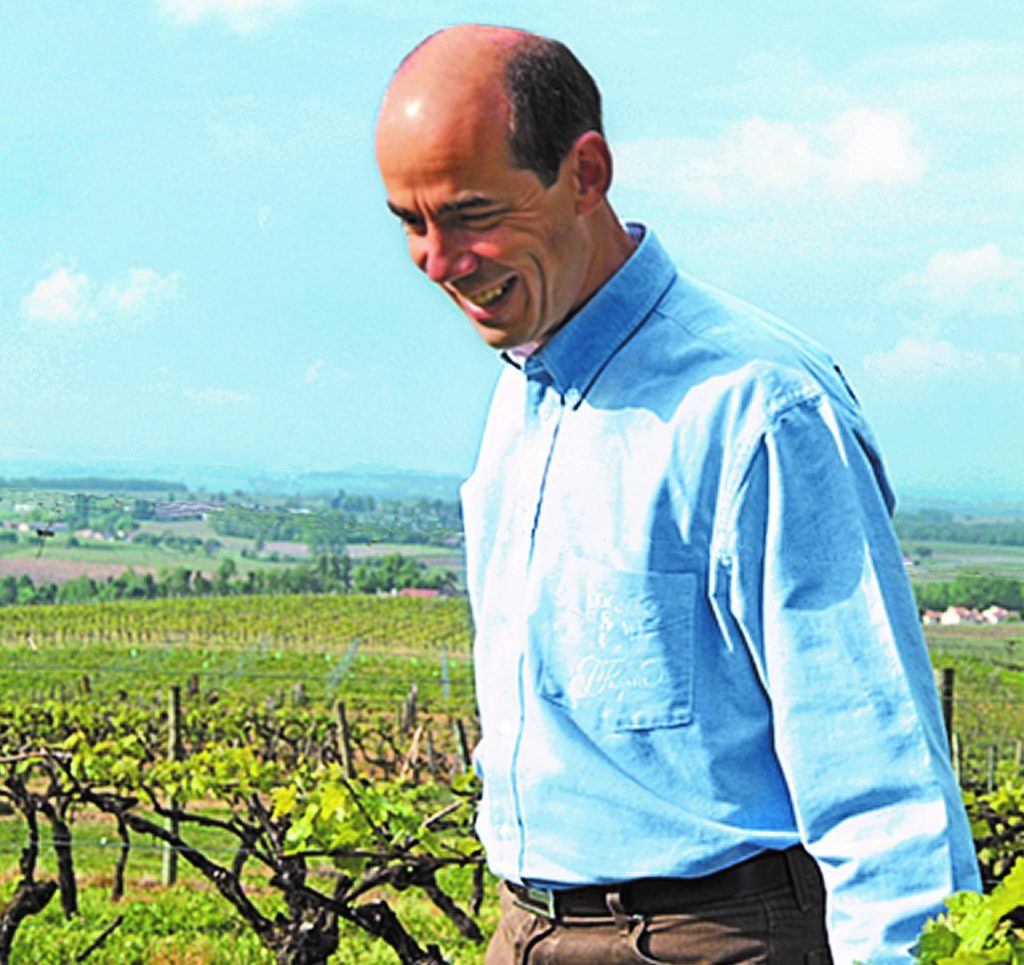 Patrice Piveteau in the vineyard

According to Piveteau: “We have a window between harvest and March to decide, then we call the authorities and they come and put a seal on it [cask of vintage wine].” This is to ensure against fraud so that only casks with the official seal can be sold as vintage. Such releases are rare in Cognac, “vintages tend to either be luxury releases from big brands or from small producers”, Piveteau said. “Frapin is small in Cognac but big for an independent grower in Grand Champagne.” It only uses grapes from its own vineyards. The 240 hectare property has been in the family for 22 generations, and is currently run by Jean‐Pierre Cointreau whose grandmother was a Frapin.

It’s a compact domaine entirely within the Grand Champagne region with a consistent chalky top soil with clay subsoil throughout, planted with Ugni Blanc (there is also a little experimental Folignan, a Folle Blanche/ Ugni Blanc cross planted 12 years ago so it is too early to speak about the quality). Vintage expressions, however, come only from the vineyard around Château Fontpinot. When asked why Piveteau replied: “I think the answer is in the question. . . . It’s the specificity of the terroir.” Thrillingly French!

Piveteau then explained a bit about the aging process. For the vintages, he uses 350 litre Limousin oak casks. Larger casks impart less wood flavour. The spirit spends only six months in new oak to pick up the tannins (and colour) needed for long ageing before transferring to 5-15 year old casks for one year before moving to old casks which have no oak flavour.

Frapin has two types of cellar, dry and humid. Interestingly, vintage Cognacs are only ever taken from the dry cellar. This ageing gives: “more evaporation, more concentration, you lose more water than alcohol,” Piveteau said. Apparently dry cellars are unique to Frapin. Again, he refused to be drawn on what the specific differences in flavour are between dry and humid cellars. “Humid cellars are smoother and more round,” he said, “but it is possible to find the same flavours in dry cellars. In dry cellars things mature more slowly. We don’t sell Cognac from dry cellars at less than 20 years. All the vintages come from the dry cellar, every time I prefer when I have to make the choice. But humid is also possible. . . .” he added just to complicate things. When deciding whether to bottle a Cognac as a vintage, he’s not just looking for quality but difference: “During ageing if a vintage is the same as the rest of range then I put it in a blend,” he said.

“What is interesting is not what I say, it’s the result in the glass,” Piveteau explained. And what is in the glass is very good indeed: the 1992 is rich but it’s also fresh and fruity, the flavour changing in the glass over the course of the day. Piveteau described it as: “like a firework, bof!” He went on to say: “It’s fine, fruity and elegant. You can find the rancio but it’s not heavy, that’s a real characteristic of Frapin. It’s a Cognac with purity, it’s not too woody. I’m really keen on complexity.” Sometimes you have to stop asking why, and just let the quality of the Cognac speak for itself.

Nose: So fruity and fresh, fresh apricots not dried, strawberry, floral, dark chocolate and toffee, plus aromatic notes of tobacco and orange peel.