Today, we’re tasting one of the world’s great brandies and it’s not from Cognac. No, it’s not from Armagnac either. It’s not from France, or even from Europe. It’s from Armenia, a country with a proud distilling heritage.

There’s a very special cask of brandy in the Ararat distillery in Yerevan, the capital of Armenia. It’s called the ‘Peace Barrel’. It was distilled in 1994, and will only be opened when there is peace between Armenia and Azerbaijan. Looking at the news today, it doesn’t look like that’s going to be any time soon as the two countries are once again fighting over the disputed region of Nagorno-Karabakh. This is an ethnic Armenian enclave within Azerbaijan. The two countries went to war after becoming independent from the Soviet Union in 1991, and what followed was an uneasy ceasefire in 1994 with the province still technically part of Azerbaijan but ruled by a breakaway Armenian government.

The Ararat distillery sits high on a hill above the capital. It’s named after the mountain that towers over the city, apparently where Noah landed following the flood. Ararat is the symbol of Armenia but it’s now in neighbouring Turkey. Armenia has been unfortunate in its long history to be surrounded by three huge empires, the Russian, Ottoman and Persian, with bits of its historic homeland often in different countries. ‘Caught between the hammer and the anvil’, as the saying goes. Nevertheless, the Armenians have, despite their tragic history, managed to preserve their language with its own unique alphabet, their culture and their fierce sense of belonging.

They are particularly proud of their brandy which dates back to 1877 when Nerses Tairyan introduced Cognac-style stills to Armenia. The most celebrated products, however, were produced in Yerevan by a Russian called Nikolay Shustov. One of his brandies won a gold medal, beating its French rivals, at the Paris Expo of 1900. The French were so impressed that they allowed Shustov to call his product ‘Cognac’. This was disallowed following World War II, but Armenian brandy is still known in the Russian-speaking world as konjak. In 1912, Shustov’s product got the official seal of approval from the czar. 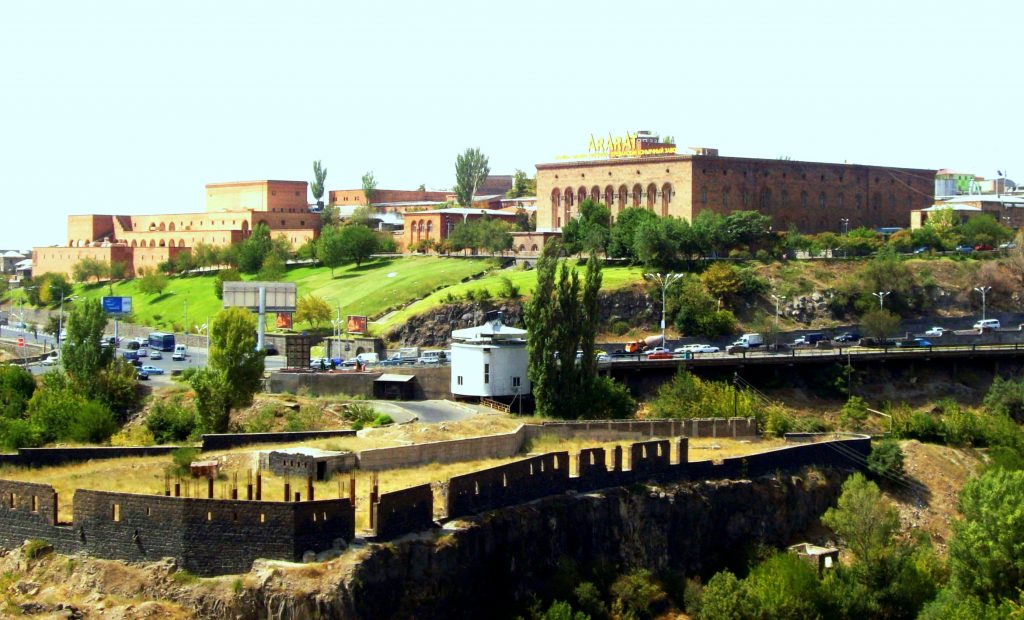 During Soviet times, Armenia was designated as the brandy producer to the USSR. The magnificent Ararat distillery was built in 1953, featuring a communist-neo-classical-meets-Armenian-monastic style dates back to this period. Whereas wine quality suffered greatly under communism, the reputation of Armenian brandy remained high. It functioned as the Johnnie Walker Black Label of the Eastern Bloc. A bottle to the right person could cut through yards of Soviet red tape.

The economic turmoil following the fall of communism hit the industry hard. As Becky Sue Epstein writes in her book Brandy: “When the USSR disbanded distribution networks disappeared overnight and the market for Armenian brandy collapsed.” War with Azerbaijan can’t have helped. Nowadays, however, the industry is more stable. The two successor companies to Shustov’s are Noy, meaning Noah, and Ararat (aka The Yerevan Brandy Company) which since 1998 has been owned by Pernod Ricard. Once again Russia is the main market, Noy is the official supplier to the Kremlin. But Armenian brandy is big all over Eastern Europe and you see them in airport duty-free in Germany and Austria, sometimes in the most extraordinary packaging; bottles shaped like AK-47s or penises. You can’t imagine Hine doing that!

It’s a shame about the novelty bottles letting the side down because Ararat makes some excellent brandies. They are distilled from indigenous grapes, mainly grown in the Yerevan region but also all over the country. Armenia is something of a viticultural paradise with an array of native grape varieties and the dry mountainous air means it’s easy to grow them without pesticides and fungicides. Try a bottle of Armenian wine, if you ever see one.

To make the konyak, the wine is double-distilled, aged in European oak. Ararat has its own on-site cooperage. It’s a huge concern, producing around 5.5 million bottles per year, that’s nearly the entire production of the Armagnac region. The master blender has a huge palette of brandies to make his blends from. They are generally sweetened, the Armenians tend to drink their brandies with dessert. The cheaper ones are very pleasant but once you get to 10 years and above, that is where the excitement starts.

The 10 year old Dvin bottling created by master blender Markar Sedrakyan in the 1930s was apparently enjoyed by Churchill at Yalta in 1945. It’s still made, coming in at 50% ABV, it’s aromatic and fiery with lots of dark chocolate, cedar and wood tannin. It reminds me of a particular full Armagnac. Even better is the 20 year old Nairi expression, which I drank a lot of during late-night chats with Armenian winemaker Zorik Gharibian from Zorah when I visited the country back in 2017.

For my money, Armenia vies with South Africa as the home of the best non-French brandies. They are true luxury products, no wonder the Russians like them so much, and should be much better known over here. And who knows, one day, perhaps, that special barrel will be opened and we can raise a glass to peace.

Check out these awesome autumn sippers!