After much excitement and 18 months of renovations, we finally made our way up to Speyside to see The Glenlivet’s newly-refurbished visitor centre in all its glory.

Back in June, we reported that The Glenlivet’s new visitor centre would be opening its doors on 1 July, and hoped that we would be able to see it in the flesh. Folks, that’s called manifestation, because just a few weeks ago we got on a plane for the first time in over 18 months, and scooted up to the Scottish Highlands to check it out for ourselves.

Spoiler alert: it’s incredibly well done. Though it’s obviously brand new, rather than something sterile and untouched – like a new toy that you’re afraid to play with – we were amazed at how warm and homely it felt. The Glenlivet is clearly striking a balance between leaning into its smuggling history and legacy, while looking forward to appealing to a younger set of whisky drinkers. 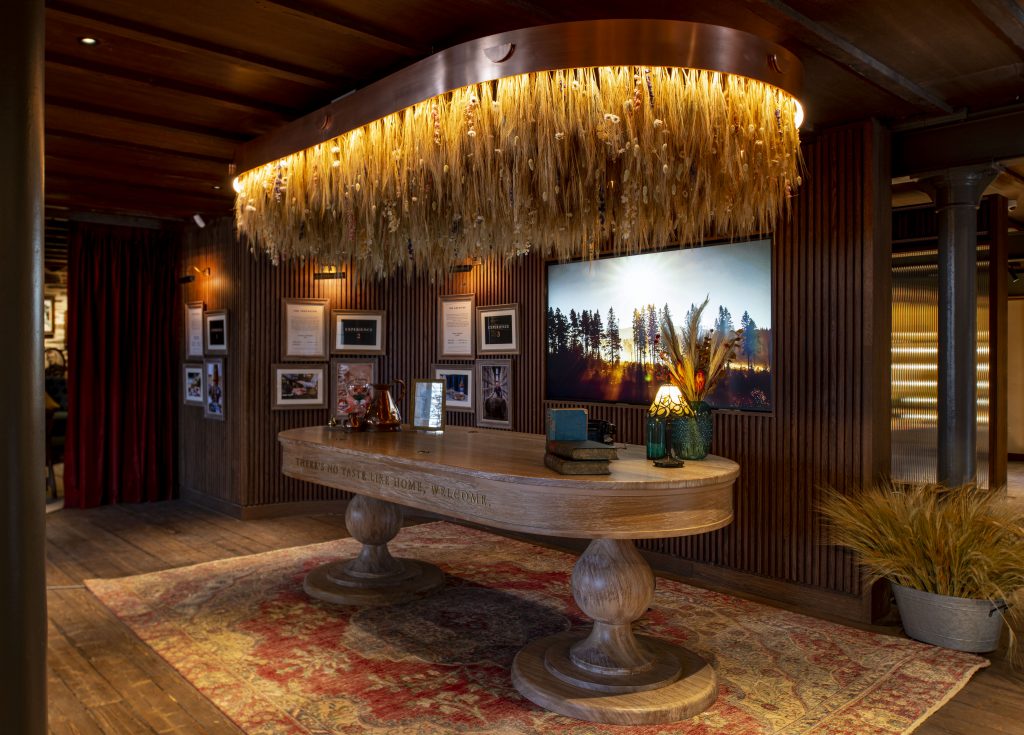 Greeted at the reception area with a flower ceiling

History of The Glenlivet

George Smith began as one of many illicit distillers during the 1800s in the Livet valley. As the story goes, those who travelled up to the area realised that his Speyside whisky was miles ahead of the spirits that were being produced in the Lowlands, which were also more expensive because they were being produced at licensed distilleries. In August 1822, King George IV on his visit to Scotland specifically requested George Smith’s whisky – even though it was illegal.

Nonetheless, the trailblazer that he was, in 1824 Smith decided that he couldn’t evade the threat of excisemen forever, and decided to open up the first legal distillery in the parish of Glenlivet – to many people’s disdain. Given that this was practically like sending a written invitation to excisemen to search his neighbour’s bothies, it didn’t go down very well. Death threats soon followed, so Smith began carrying a pair of pistols with him at all times, which are proudly displayed in the new reception room after being kindly donated by the family. Apparently he never used them – apart from this one time he fired a shot into a coal fire, simply to create dust as a diversion. Make of that what you will… 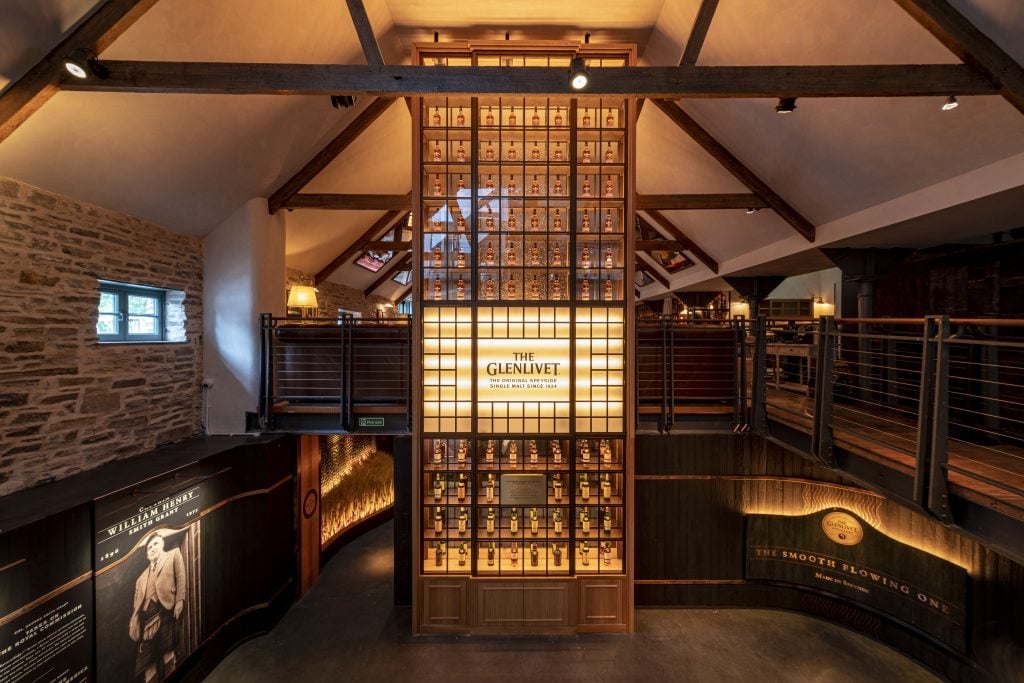 We’re hosted by Lyndsey Gray, whose knowledge seemingly knows no bounds. Beginning at a magnificent golden wall of bottles, we learn the history of the distillery and its owners while gazing upon The Glenlivet 12 Year Old throughout the decades – each  bottle a snapshot in time.

Next up, and one of my favourite segments, is an indoor field of barley, harvested and preserved at one of the local farms that supplies The Glenlivet. We’re presented with short videos from people all along the whisky’s journey; from the local barley farmers and coopers, to master distiller Alan Winchester. Humanising the people behind the liquid makes for a lovely touch, and coupled with the glorious smell and sight of the barley, it’s a mesmeric room.

Now, time for some more of the geeky stuff: the milling, mashing, fermentation, and distillation processes. We gather inside an actual washback for this part of the tour, and it’s a wonderful touch, make you realise just how big these wooden structures are! Sadly, because of the pandemic the production areas aren’t included as part of the tours at present – though the team are feeling hopeful that by 2022 that will be able to change. Until we can marvel at the shiny pot stills once more (rather than peeking at them through the windows), this is the next best thing.

This part of the tour finishes, naturally, in the warehouse. Gray admits this is the most difficult room to get people to leave – people want to stay in here because of the smell. Well, you are literally breathing in whisky, so perhaps that’s unsurprising.

Hone in your senses in the tasting room

What better way to end a tour than with a tasting? We sip on the core trio: the 12, 15, and 18 Year Old expressions. The darkened tasting room envelops your senses, with a shining beacon of whiskies taking centre stage in the middle. It’s a great way to explore the impact of various maturations, with the 12 and 18 boasting the same cask combinations, though tasting radically different.

Whisky and food – but not as you know it

Back into the main area, we pass through the bar and into the Smuggler’s Hideout room for a whisky tasting and food pairing. The walls of this cosy den are lined with eighty-three hand-crafted clay flagons, replicas of the vessels that were historically used to smuggle The Glenlivet through the Scottish hillside back in George Smith’s day. It’s here that Gray guides us through two twists on the well-trodden path of pairing whiskies with cheese and chocolate. 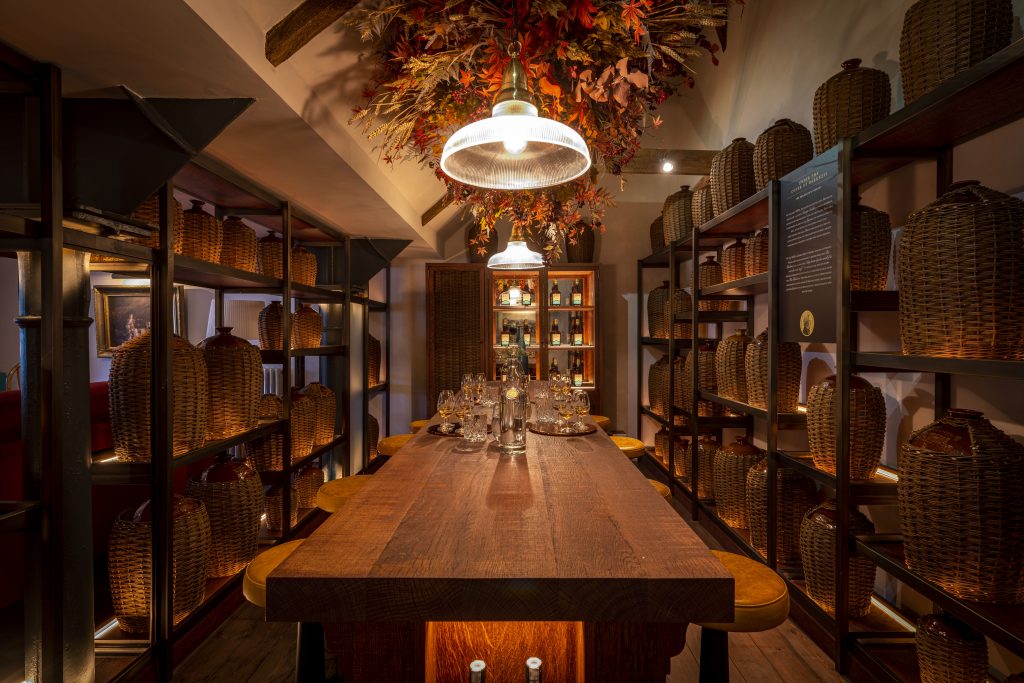 Check out whisky, popcorn, and chocolate in the Smuggler’s Hideout

First up is a 25-year-old Glenlivet from the Single Cask Collection, paired with Bare Bones 60% milk single origin chocolate. Gray acknowledges that “naturally you’d probably go with at least a 75% dark chocolate, but the milk chocolate brings out all that creaminess” from the second-fill ex-sherry butt where the whisky spent its days. The team wanted to concentrate on provenance, with the provenance of the cacao bean echoing The Glenlivet’s use of Scottish barley.

The second pairing is The Glenlivet’s take on whisky and cheese. This time, the Illicit Still 12 Year Old (a limited-edition available only at the distillery) is paired with cheddar popcorn from Popcorn Shed. Should it work? I’m not sure. Does it work? Yes – it brings out the bundles of ripe banana flavours in the whisky. Fans of salty/sweet combinations, this is a treat. 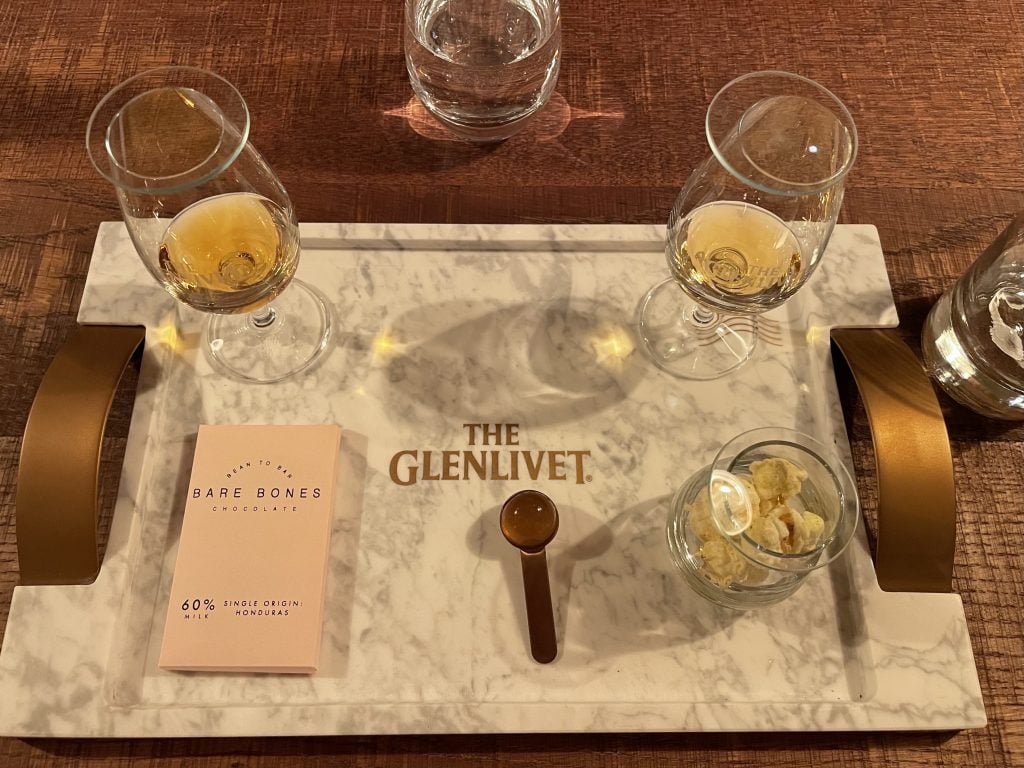 Of course, we have to round off with the famed Cocktail Capsule Collection – since launching at London Cocktail Week 2019, I’ve read the good, the bad, and the ugly about these little flavour bombs. Finally, a chance to form my own opinion. It’s worth mentioning that they’ve been revised, and are now half the size they were before (from 25ml to 7ml), at a reduced strength, too (from 28% down to between 15-20%).

I’m presented with the Mai Tai version, and seeing as the collection is all about challenging perceptions of whisky, I’d say it’s a job deliciously well done. You can only try them at the distillery these days, which is a double-edged sword – it makes them all the more exclusive, but all I wanted to do was bring back a whole case for my friends.

A highlight of this new experience is the chance to fill your very own bottle of whisky at the end! You can choose from distillery-exclusive cask strength editions of The Glenlivet’s 12 Year Old (£50), 15 Year Old (£70), and 18 Year Old (£125) expressions. You pull the lever, fill it up, and write your name on the label which you stick on yourself. A drinkable, personalised souvenir? Don’t mind if we do. 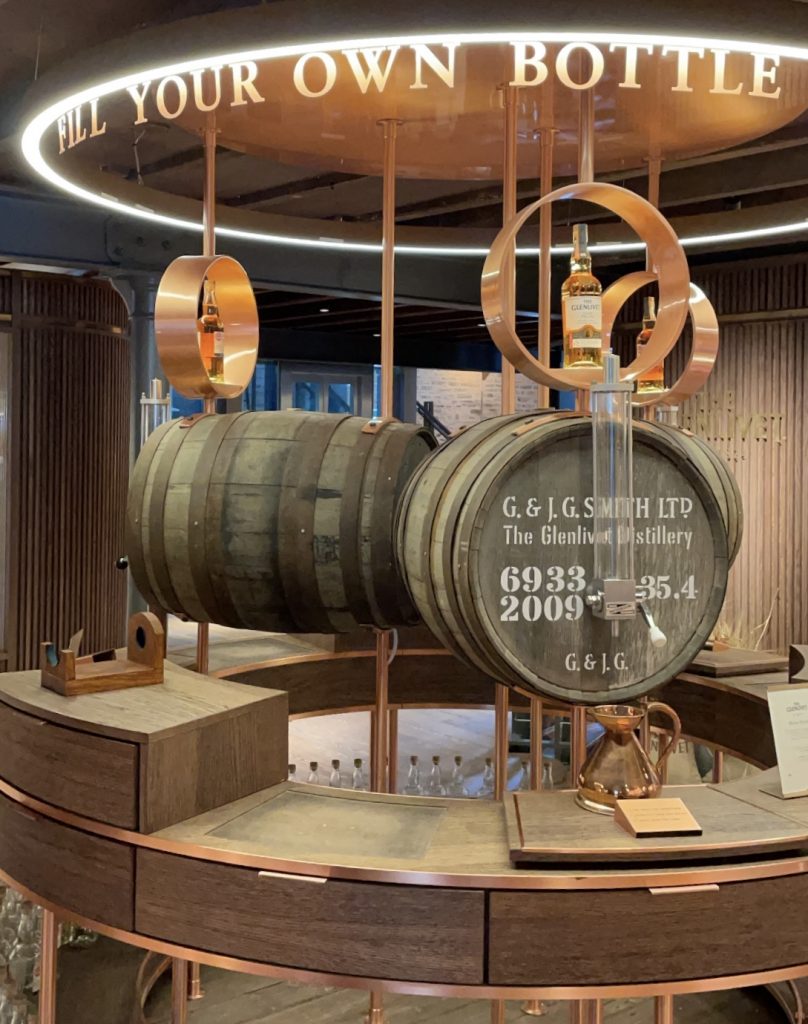 You can fill your own bottle of whisky!

From a range of geeky tastings, unusual pairings, and delicious cocktails, The Glenlivet has made sure there’s something for every stage, age, and budget of whisky drinker in this new refurb. The tours range from an accessible £15, which includes a tasting of the core trio, to a swanky £100, which includes a visit to the warehouse and a taste of ​​some of The Glenlivet’s oldest and rarest whiskies – namely The Glenlivet 30 Year Old Cellar Collection. You can check out the various tour options here.

Master of Malt @MasterOfMalt
19 hours ago
A stunning rum from Nicaragua, @flordecana 12 is produced using 100% renewable energy, offsetting any emissions by planting trees! 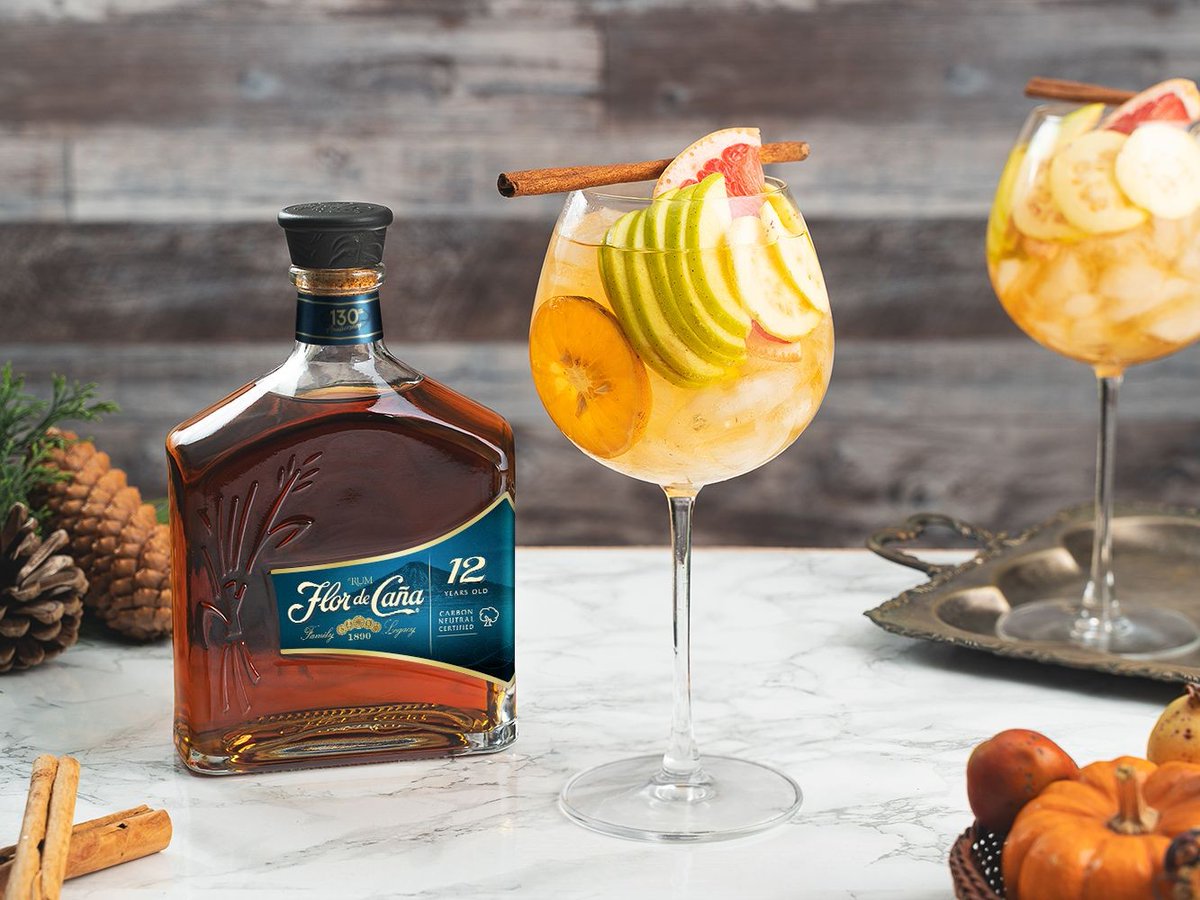 Master of Malt @MasterOfMalt
2 days ago
Explore a world of Wild Spirits, from producers who strive to make a positive impact on the environment, whilst also making super tasty drinks!