It’s Master of Malt Islay Festival 2021 Day 9: Ardbeg time! For the ninth day we travel to the mighty Ardbeg to see what the team has planned while Lucy Britner shares her own painful memories of the distillery.

We’re so near the end of the Master of Malt Islay festival 2021. This is the last day on the island itself before we head to Jura and from there back to MoM Towers at a secret location in Kent. We’ve got a treat today, as we’re going to Ardbeg, home of some of the most individual and fiercely-loved whiskies in Scotland.

Before we hand over to Lucy Britner for her memories of Ardbeg and the Islay half marathon, we’re going to take a look at what kind of online shenanigans the team has planned for Ardbeg Day. But before that, check out our very own Jake Mountain talking to now-retired distillery manager Mickey Heads from Feis Ile 2019 and don’t forget to listen to our Islay memories playlist on Spotify

As you might expect, Ardbeg is doing things a bit differently with what’s described as a “Fantasy Island Map” that you can navigate around to discover whisky-based treasure. “Simply click where you want to travel to, pour yourself an Ardbeg, and enjoy uncovering the myth behind this year’s malt – Ardbeg Scorch,” it says. It’s a bit hard to explain so we recommend going to the special page to find out more.

Ardbeg Scorch, of course! This will be released in time for Ardbeg Day on 5 June. That’s today! Naturally, Ardbeg Committee members get first dibs. The name comes from a dragon that apparently lives in Dunnage Warehouse no. 3. The limited release whisky is aged in heavily-charred ex-bourbon casks and bottled with no age statement at 46% ABV. Dr Bill Lumsden described it as “a fire-breathing beast of a dram!” The tasting note is quite something: “A long and heroic finale, with a subtle tarry aftertaste. A finish that will drag on, well into its happily ever after.” Blimey!

Colin Gordon, Ardbeg’s new distillery manager, said: “This year will be my first Ardbeg Day ever: a baptism of fire! It’s a shame we Ardbeggians can’t enjoy it together in person, but the online event is shaping up to be tremendous fun. With a whole virtual world to explore, including fantasy inns, campfire tales, medieval feasts and live tastings, there’s plenty for people to be excited about this year.” 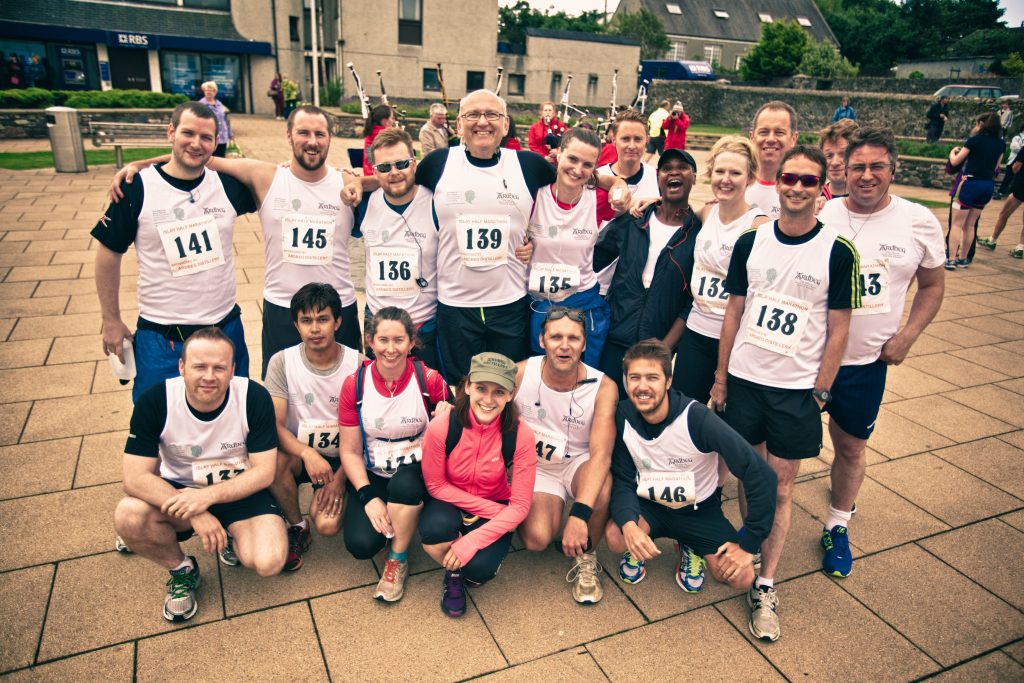 The brave runners of the Islay half marathon. Lucy Britner is 132

Tales from Islay: The Ardbeg half Marathon

This is the story of how Lucy Britner came to be wearing the former Ardbeg distillery manager’s socks. It’s also a story of friendship, loss and an ill-advised ceilidh.

The mile marker said ‘7’. I was over halfway in the half marathon that I’d only half trained for. Horizontal rain turned to hail and then back to sunshine, and I could no longer see any of the other drinks journalists that were also taking part in the Ardbeg Islay half. We were all doing the race in memory of one of our peers, Alan Lodge, who had died of a brain haemorrhage shortly before his 30th birthday.

Ardbeg had always been Alan’s favourite dram, and he would mention it frequently and passionately. And so here I was, plodding along a country road, trying to avoid grain trucks as they sped past. The rain kept coming and with it, every emotion I had. Of course, I was sad to be thinking about Alan but then moments later, laughing out loud at what he would’ve made of this motley crew of booze hacks running 13.1 miles.

I suspect I looked genuinely deranged. More so, perhaps, because mile seven was going on forever. And ever. I knew I couldn’t give up because I was alone in the middle of nowhere – and as I was fighting a feeling of despair, finally a mile marker came into view. It was mile 10. It turned out the others had blown away.

The finest illustration of just how lonely the run was, is Phill Williams’ brilliant picture of booze journo Richard Siddle. We called it the ‘never-ending road’ – and I genuinely don’t know how he’s smiling in the picture. Well, actually I do… Richard, or ‘the chief’ as he is known, ran the race on a cocktail of painkillers, owing to a bad back. He told me later that he’d been listening to Kylie and even enjoyed a blissful few miles where she had been running along beside him. Maybe that’s how to run a half marathon…

Never do this after a half marathon

The end of the road

The race started and ended in Bowmore and as I approached the finish, I could see familiar faces, already wearing medals and spurring me on for the final few paces.  A stranger shouted ‘C’mon, Lucy’ and for a second, I thought I was some kind of new local celebrity, but then I remembered my name was printed on the back of my top. Still, it gave me a boost for those last steps, especially as to meet the 13.1-mile requirement, you had to sort of run beyond a natural finishing point and round a little corner, away from the bustling main drag of Bowmore.

So, we finished. We ate snacks on Bowmore beach and patted each other on the back. The competitive ones among us talked times and tactics, showed each other app readings and compared running notes.

But I had something else on my mind. I’m a big believer in rewarding myself after any kind of exercise, so my thoughts naturally turned to what I could eat and drink after running that far. And so, just a couple of hours later, I was sipping from a can of lager in the village hall, awaiting my turn to be flung around the dance floor at the ceilidh. The hall was packed with locals and runners, and no one showed any of that ‘school disco’ fear. Indeed, we clapped and danced for hours and hours.

This, it turns out, was a huge mistake.

The next morning, my blisters had blisters and no amount of plasters would let me put on yesterday’s trainers. For some reason, I had taken flipflops to Scotland, which was a blessed relief until I got to the Ardbeg distillery.

We were hosted by the wonderful Mickey Heads, who was the distillery manager at the time – and if  my memory serves, we got to try many drams, including a limited-edition Ardbeg from 1973, as well as Alligator, Corryvreckan and Galileo. (Soz, Alan, you would’ve loved this.) 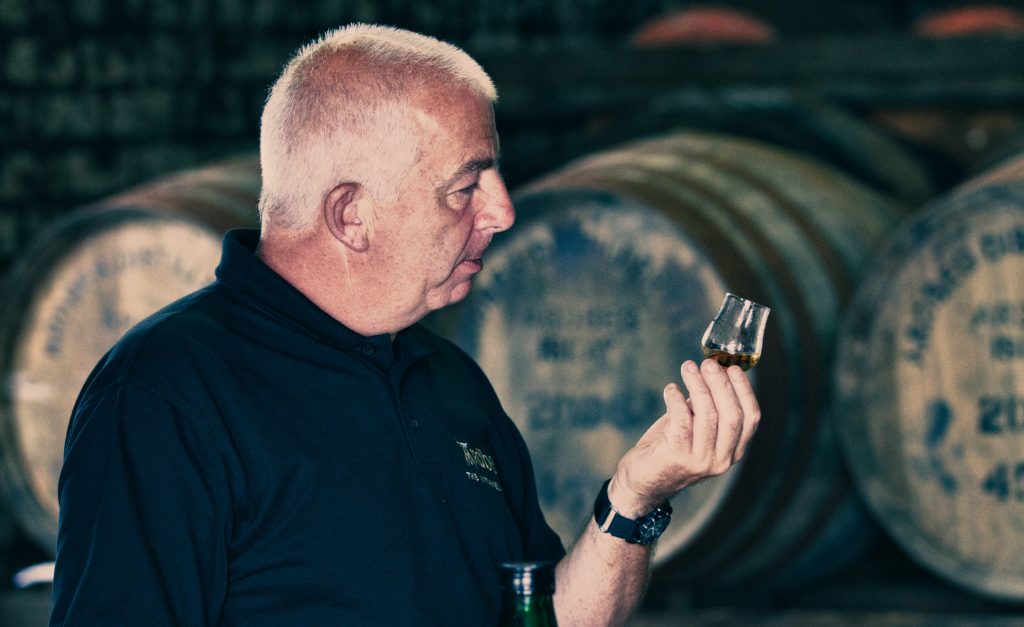 Mickey Heads to the rescue with a fresh pair of socks

You can’t hike to a water source in flip flops

After a tour of the distillery, Heads announced we were going to hike to Ardbeg’s water source, Loch Uigeadail, for a picnic. Now, it’s not that far – about 1.5 miles – but there’s always a danger of ticks and the like, so my flip flops quickly became a bone of contention. There was no chance the trainers were going back on and soon a pair of wellies appeared, and then Mickey handed over a fresh pair of socks. From his own sock drawer. What a legend.

And so we walked (slowly) and lazed by the loch, eating, drinking, chatting.

In hindsight, the Ardbeg half was a wonderful way to see a chunk of Islay. And I’d do it again, just with better trainers.

And so, for this year’s virtual Fèis Ìle, I raise a glass of Ardbeg to you, Alan. Gone, but never forgotten.

Photos of Islay half marathon courtesy of Phil Williams.

Master of Malt @MasterOfMalt
11 hours ago
Whip up a Strawberry Shrub #cocktail with Piston Gin! Shake your gin with lemon juice and ice, strain into a glass, add crushed ice and a drizzle of berry cordial, then garnish with fresh berries.

Master of Malt @MasterOfMalt
15 hours ago
Made in the Amazon rainforest with a host of native botanicals, Canaïma Gin is deliciously sharp and fruity – and the brand supports reforestation!