Henry Jeffreys
3 Comments on Macallan releases its oldest ever whisky

We’ve just had news of the oldest ever release from Macallan, an 81-year-old single malt distilled way back in 1940. It’s called The Macallan Reach and the packaging is sure to get people talking.

Sometimes it seems that not a week goes by without the Macallan team releasing some stupendously old and rare whisky. It’s what they do. But still, this latest release dubbed the Macallan Reach is likely to get jaws dropping for many reasons.

Firstly, it’s very very old. This will be an 81-year-old single malt, distilled in 1940, just before the distillery closed down for the duration of the second world war.

But what the most striking thing about the Macallan 81 Year Old isn’t the price, the age, or the rarity. It’s the packaging. We’re used to carved wooden boxes and hand-blown decanters but the Macallan has really gone to town/ jumped the shark with this one. 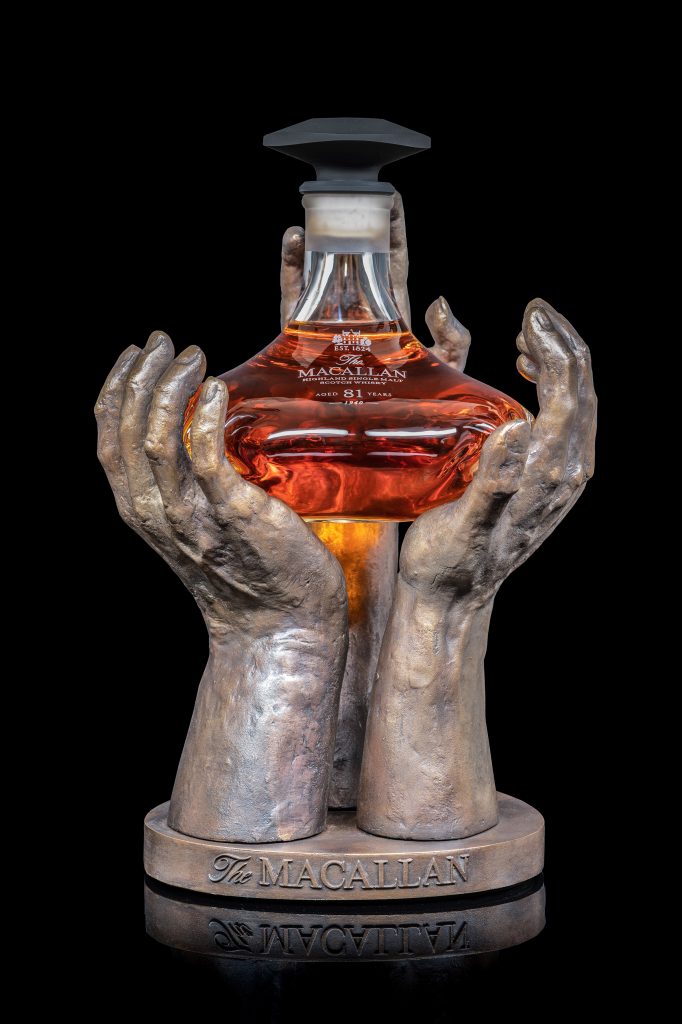 The Macallan Reach comes in a glass decanter, naturally, but then the decanter is held up by three hands cast in bronze by sculptor Saskia Robinson. It looks like something from a futuristic fantasy book or an object sacred to an ancient pagan cult. Reactions on Twitter included “zombie chic” and “the sort of thing the witches would give Lady Macbeth as a wedding present”. Particularly strange is the fact that it has not two, not four, but three hands.

According to the press bumf: “Each hand represents characters in The Macallan’s history and their unique story. One commemorates the Distillery workers of 1940 who crafted the spirit into existence, in challenging times, over eight decades ago. Another is the hand of one-time chairman, Allan Shiach, whose grandfather headed the company when this remarkable spirit was first consigned to its cask. The third is that of today’s Master Whisky Maker, Kirsteen Campbell, who carefully selected the 1940 cask used to create The Reach, deciding that now was the time to share this precious whisky with the world.” So there you go. It still looks really creepy.

Anyway, we’re clearly not the target market. Kirsteen Campbell, master whisky maker, continued: “It is an honour to introduce The Reach. Created during a turbulent time in the world, this extraordinary expression showcases The Macallan’s history, ingenuity, and unmistakable strength of character. The creation of many hands, The Reach has been a truly collaborative effort. It’s also a tribute to the people who made this precious whisky, and their enduring spirit which never wavered.”

The Macallan Reach will be on show at the Macallan Distillery from today, 9 February, and available worldwide soon. We will let you know if we will be getting one for sale on Master of Malt.

The delicious world of marmalade cocktails