Love bourbon? Heading to Kentucky? Make this your first stop…

Annie Hayes
No Comments on Love bourbon? Heading to Kentucky? Make this your first stop…

Unless you’re lucky enough to live in or around the Bluegrass State, a visit to the birthplace of bourbon is something akin to a pilgrimage. As it readies to open the Kentucky Bourbon Trail Welcome Center and The Spirit of Bourbon interactive exhibition, MoM reveals why The Frazier History Museum needs to be your first port of call…

If you’re hoping to cram in all 23 stops on both Kentucky Bourbon Trail tours, your whiskey-filled trip will require meticulous planning. Where to begin? It’s a question many have pondered. Thankfully, the good people at The Frazier History Museum, located in the heart of the Bourbon District of downtown Louisville, have been working hard on a solution. And come 25 August it will be open to the public.

In partnership with the Kentucky Distillers’ Association (KDA), the team is constructing the Kentucky Bourbon Trail Welcome Center, which serve as the official starting point of the tours. The concierge-style service will offer visitors a tailored guide to bourbon distilleries throughout the Commonwealth, as well as the best bars and restaurants throughout the state.

That’s not all. A permanent exhibition about the history of bourbon whiskey, called The Spirit of Kentucky, will provide guests with the foundation. Described as “a visual guide to the history, craft and culture of the bourbon industry”, the interactive exhibit shares stories of the people, places and events that have shaped the category into the behemoth brown spirit it is today. 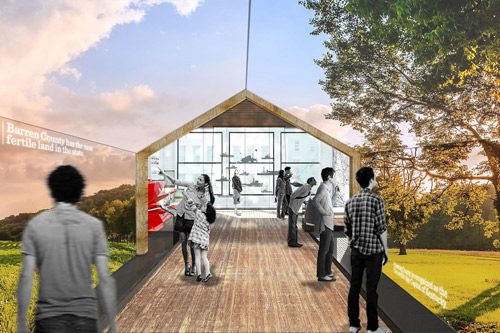 To make sure guests are extra clued up before they hit the distilleries, the museum has five Stave and Thief Society [the official bourbon education course of the KDA] certified stewards primed and ready to tackle any questions.

“It’s been years in the making,” Andy Treinen, The Frazier’s director of marketing, self-confessed bourbon fanatic, and former WHAS-TV news anchor(!) tells me. Incidentally, our conversation takes place the on the morning that House Bill 400, – colloquially known as Bourbon without Borders – is signed into law, which allows for the shipment of distilled spirits to other states. In fact, the very first packages of bourbon were shipped from The Frazier mere hours before: literally history in the making.

“There’s no industry that Kentucky owns quite like bourbon – 95% of the bourbon in the world comes from here,” Treinen continues. “We thought that this would be an outstanding way to show off the category, the culture, the families and the history of this signature industry which is America’s native spirit.”

After all, where better than Main Street? Incidentally, the historic road used to be called Whisky Row, because there were 89 different bourbon distilling companies pitched up there. The experience begins with a wander across a covered bridge, a “sight and soundscape” depicting how Kentucky’s natural features like Cumberland Falls, the Kentucky River Palisades and Red River Gorge, promote bourbon-making.

Visitors can experience soil and terrain samples, touch slabs of shale and limestone, examine maps of Kentucky’s waterways*, get familiar with the shared flavour characteristics of bourbon (as if you guys will need practice…), and get up-close-and-personal with model replicas of historic river paddle boats and grain silos, stacks of white oak lumber and whiskey barrels, and vintage ploughs and farm equipment.

Each room in the exhibition will have a theme; this one is ‘enchanted’. “It’s designed to give people a sense of what Kentucky is really about, explains Treinen. “It’s where people will realise they’re entering into something special, it’s a mood-changer. Kind of like drinking your first bourbon, if you will.” 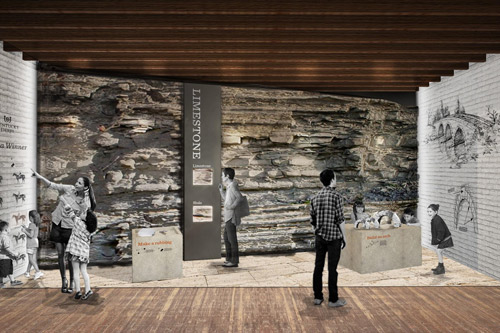 The next stage of the exhibition, “gracious”, focuses on the culture of camaraderie among distillers. It’s essentially a touch-screen dining room table, which Treinen says is “really a repository for all of bourbon history” that brings all the brands together. “The folks in this industry believe that a rising tide floats all boats and when there are crises, when there are distillery fires, they have historically helped each other out,” he affirms.

Consolidating this part of the exhibition must’ve been particularly fascinating. Is there a particular story that stood out, I ask? Treinen obliges. “There are Beam family members who have worked as a master distiller at every single distillery in the state of Kentucky – except for one,” he says. “The only reason they didn’t work there is because a poker game was played to determine which distillery Beam would be a master distiller at.” The distillery that lost the game missed out.

The experience ends in “refined”, a sultry room filled with uplit artefacts and stills in glass cases. Advertising from the 20s, 30s and 40s bedeck the walls, and references to bartending, cocktails and popular culture are documented. Visually, the experience transitions from natural light to near-darkness, “just like Kentucky bourbon”.

Everyone loves a selfie, right? For many, the highlight of the tour will be the chance to snap a pic of themselves in front of The Frazier’s epic bottle collection on the way out. We don’t drop ‘epic’ lightly: the wall contains every single bottle of bourbon that is currently being produced in the State.

“In the old days, nobody was interested in how long [liquid] was in the barrel and what different levels of charring do and how the rickhouses east third floor barrels were different from the first floor west barrels,” explains Treinen. “It’s all becoming much more scientific because of – our mayor calls it ‘bourbonism’; bourbon tourism. People want to know!”

*Kentucky has more internal waterways than any state in the US other than Alaska, Treinen tells me.

The Islay moment competition winner is…