In the Beginning, There was Beer…

Jake Mountain
No Comments on In the Beginning, There was Beer… 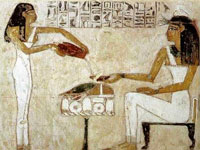 We do beer now, as you’ll no doubt know by now. That means we’ll be writing about the delicious stuff here on the blog as well as all the new and exciting pages on the site. Where to start though? Well, how about at the very beginning? That’s usually the best place.

My compulsion to start thousands of years ago may have something to do with my degree in Ancient History & Archaeology. It’s not something I get to use daily as part of my employment in drinks retail*, but today’s different. To trace the history of beer from the start you have to go right back into the ancient world, to the very birth of civilisation in fact…

Some of the earliest known examples of writing, found in southern Mesopotamia (modern day Iraq) in the late 4th millennium BC(!), relate to beer, whilst analysis of sediment on ancient jars shards from the Zagros Mountains (in modern day Iran) pushes the production of barley beer back another three centuries or so to 3400 BC (into the early Uruk period). If that doesn’t make you think “Wow, history is awesome. Tell me more…” then you could always skip down to the bit where I taste four beers. Up to you, I find this endlessly fascinating!

The earliest known man-made alcohol of any kind dates back to China around 7000 BC and was made with grapes, rice, honey and hawthorn. The likelihood is that barley beer was being produced in the Middle East at least that far back, however, being closely linked to the emergence of agriculture in the Fertile Crescent around the 10th century BC. Wheat was also cultivated and probably used. Some even argue that beer may have been a key driving force in the domestication of cereals and/or that beer dates back as far as the earliest unleavened breads (some 20,000 years ago). For context, distillation emerged around the 1st century AD.

As complex societies began to develop in southern Mesopotamia with agricultural surplus, early urbanisation, administration, public buildings, writing (as above) and city states, beer never lost its prominence nor its importance. Beer was used to barter with, it was a reason to build the granaries that made urbanisation possible, which in turn required administration including a numbers system and ultimately writing. It even held its place in religion with its own beer deity, Ninkasi, with brewery set-ups having been found within temple precincts. 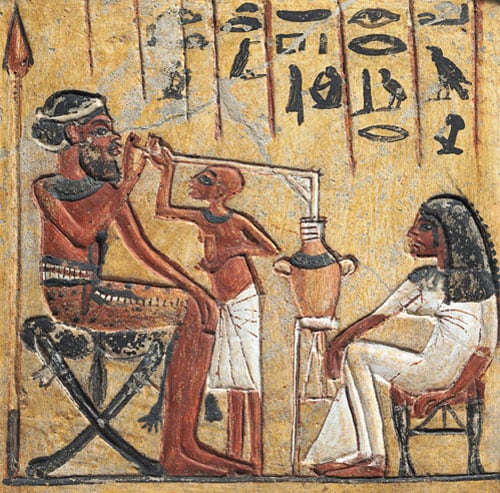 Drinking beer through a straw in Ancient Egypt.
(Very similar images can be found on seals from Mesopotamia.)

The beers mentioned so far were made by first baking a kind of bread (bappir) which would be broken up in water for fermentation, leaving behind plenty of solids, which necessitated the use of a straw. A straw made of gold and lapis lazuli has even been found amongst the funerary goods of what must have been an important member of one of these early societies. The Hymn to Ninkasi (the beer goddess mentioned above) details the process used, which would have been almost identical in Ancient Egypt. Written in 1800 BC (by which time they appear to have worked out filtration) it documents much older traditions…

You are the one who bakes the bappir
in the big oven,
Puts in order the piles of hulled grains…

You are the one who soaks the malt in a jar…

You are the one who holds with both hands
the great sweet wort,
Brewing [it] with honey and wine…

The filtering vat, which makes
a pleasant sound,
You place appropriately on [top of]
a large collector vat…

When you pour out the filtered beer
of the collector vat,
It is [like] the onrush of
Tigris and Euphrates…”

Fantastic, eh? It’s also the oldest known recipe in the world, and it’s for beer!

It’s not just recipes, either. The Epic of Gilgamesh (from around 2100 BC but again based on earlier oral traditions**) is considered to be the earliest surviving great work of literature and includes the tale of how Enkidu (a primitive man covered in hair) becomes civilised after having been seduced by a temple prostitute and also introduced to beer. Beer symbolising civilisation. “Drink the beer, as is the custom of the land” she encourages him, so he drinks seven jugs and (in my favourite translation) it’s said that he “became expansive and sang with joy!” That’s what I like to think happens to me when I drink a little too much, I become “expansive”.

Some of the earliest law codes also reference beer, with the Code of Hammurabi from 1750 BC containing laws such as “If a tavern-keeper (feminine) does not accept corn according to gross weight in payment of drink, but takes money, and the price of the drink is less than that of the corn, she shall be convicted and thrown into the water”!

In the Old Kingdom of Ancient Egypt the pyramid builders (2700 BC – 1700 BC) received a healthy daily ration of beer (4 or 5 litres), which made the brewer or ‘head of beer production and storage’ a very important man! Tombs of brewers such as Khonso-Im-Heb (early 14th century BC) from the New Kingdom, meanwhile, confirm the status they enjoyed throughout Ancient Egyptian history. Pharaohs drank beer too, of course, and were often buried with a whole load of full beer jugs (or at least the recipe) for a big ‘ol party in the afterlife.

By the second half of the 1st millennium BC the Greeks Xenophon, Sophocles and Polybius are writing of beer and traditions of barley wine, whilst the Roman Tacitus tells us soon after the turn of the millenium that barley and wheat was being fermented across central and northern Europe (although not to his taste). The earliest mention of hops doesn’t come until the 9th century AD and even then they’re not widely used. Before hops a wide variety of herbs and spices were used for their flavour and preservative qualities throughout the middle ages, but there’s also evidence to suggest that these were being used thousands of years earlier.

Right, better actually taste some beer then. With the above in mind I had a dash through the beer aisle for some modern examples brewed with honey, fruits, herbs and/or spices. Often considered specialities or even novelties these days, intentionally or otherwise they have links to some of the earliest beer making techniques.

I wanted to make sure I picked up at least one honey beer (not to be confused with mead) and whilst I almost chose Barbãr (said to be based on the cervoise of their ancestors), in the end I selected this golden Scottish ale. Brewed with organic malt, hops and heather honey, Black Isle donate 10p from each sale to The Bumble Bee Conservation Trust.

Nose: Runny honey on toast! Hints of heather too, with honey eventually giving way to biscuit, hops (herbal and lemon) and tinned peach.

Finish: Bitter (although not massively so) and drying, still malty.

Overall: Malt, herbs and honey – bit of an usquebaugh vibe on the nose (i.e. some of the earliest whiskies or malt spirits). By far the lightest of the beers I tasted (there are some heavy hitters coming), it came into its own once the initial honey hit dissipated slightly to reveal the sweet fruit beneath.

Not quite dates (not even the same family), but this stout is brewed with figs. It’s likely that naturally fermented figs were one of the first sources of alcohol encountered by man. Plus, the label is completely awesome.

Nose: Sweet and dark with roast malt, vanilla, dried fruit (probably couldn’t put my finger on figs without the autosuggestion) and hints of raspberry or cherry.

Overall: The fruit is subtle but present throughout as this one takes you deeper from a seemingly sweet nose through to a gorgeous dark and bitter finish.

A collaboration between Brouwerij Kees and Magic Rock from which I expect rather less subtlety… It’s brewed with blackberries, blackcurrant, oranges, apple, cinnamon, star anise and vanilla!

Palate: Fruity but a total change of direction – fresh orange juice and grapefruit zest – with toasty malt building on the tail.

Overall: Bonkers, really, but intriguing. I kept going back for more – a “Quadrupel with some magic” indeed.

Last but not least, a Christmas ale! Presented as something of a novelty, of course, Christmas or Winter ales aren’t just for December. They’re pretty awesome and cellar forever. Cuvée De Noël is made with a secret selection of aromatic herbs and spices…

Nose: Fennel seeds and caraway up front with nutmeg, orange peel (also a little grapefruit and even yuzu?), some Christmas pud, dates and caramel.

Palate: Orange juice, but more Orangina than the fresh acidity of Brewed With Friends, brown sugar and gingerbread.

Overall: Intense with dried fruits, spice and a herbal edge. Very much enjoyed in March.

* I did get all excited and mentioned my degree once before on the blog with regards to Highland Park’s depiction of Loki, but I was essentially commenting on a piece of marketing rather than the history of the liquid on that occasion.

** Some of these oral traditions that found their way into the Epic of Gilgamesh also influenced the Bible, including an extremely similar story of a great flood, for example.

Master of Malt @MasterOfMalt
12 hours ago
Read up on this year's spirit sales trends in @DrinksRetailing News! Whisky is doing well, and we've recorded big increases in the Tequila and rum categories, with some superb single cask bottlings, and high-end releases hitting the market.
https://t.co/eyxBPVWGOJ
View on Twitter
3
9

Master of Malt named Global Online Retailer of the Year 2016!