We hear a lot about environmental concerns and sustainability from the Scotch whisky industry these days. But is there real substance behind the marketing? Ian Buxton investigates…

I watched a nice little video recently. It features Doug Allan, a wildlife cameraman particularly noted for his work on Blue Planet, talking about his relationship with the sea. It runs alongside another short film about some rather earnest Californians who make ‘sustainable surfboards’. Both form part of Old Pulteney’s Rise with the Tide campaign on the brand’s website, where it tells us, rather sententiously I felt, that its story “is inseparable from the sea”, and that it embraces “the sea’s immense power… to do something remarkable.”

I rather like Old Pulteney and enjoyed the feel-good videos, without thinking about them very deeply.  After all, who these days doesn’t want to appear concerned about the environment in general and oceans in particular?  We’ve all seen the disturbing images of oceanic pollution and watched distressing footage of birds, animals and fish caught up or killed by plastic waste.  We all want to do something.

Kudos then, to the films with their stated aim. “Our latest film series is all about sharing these stories,” the website assures us, “so people can take inspiration from them. To get out there, embrace that opportunity and do something remarkable.”

So, I wondered, what remarkable thing is Pulteney doing? I posed a series of questions to the brand, expecting to hear about wave power generating the distillery’s electricity, reductions in effluent and waste, work with local environmental campaigners – something, anything related to these worthy messages. To summarise the answer: there’s nothing in particular.  Turns out this is a brand awareness campaign attempting to highlight Old Pulteney’s claim to be ‘The Maritime Malt’.

Now we could discuss the highly-vexed and contentious question of saltiness in the taste of whisky, but I’m not going down that particular rabbit hole. Or we could enquire what it is, precisely, that makes Old Pulteney notably different from other distilleries located on our coastline (Talisker’s marketing is uncannily similar). But there’s a bigger issue – and that’s the question of ‘greenwashing’ in marketing. 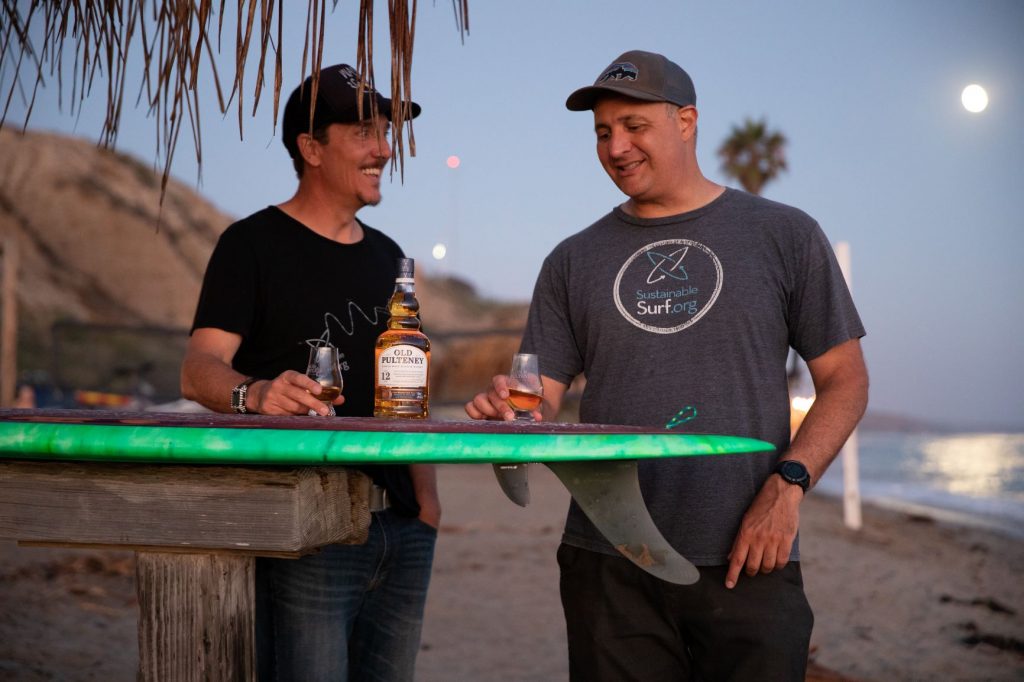 The Ecoboard boys enjoying a dram

Greenwashing: “a form of marketing spin in which green PR (green values) and green marketing are deceptively used to persuade the public that an organisation’s products, aims and policies are environmentally friendly and therefore ‘better’” (thanks, Wikipedia for that cogent summary). I’d say that aligning your brand with cuddly Doug Allan and the manufacturers of ECOBOARDS™ without actually doing anything is a classic example. Incidentally, the surf video was shot on location in California – each person from the brand who flew to Los Angeles generated 2.63 tonnes of additional CO² (or around three times that if they were fortunate enough to be flying business class, which would wipe out the CO² saving of more than 200 ECOBOARDS™).

In fairness, I don’t think anyone at Old Pulteney really thought about this in terribly great depth. They seemed genuinely surprised by my questions so what I think we have here is a bit of fluffy PR with no real substance.

It’s a shame though, and the disappointment is made worse by the fact that some brands are doing this well. Take Glenmorangie, for example, and its DEEP sponsorship, which we covered back in May last year. It is helping the regeneration of the oyster beds in the Dornoch Firth, which will improve the local marine environment and may, in time, form the basis of a sustainable high-value fishery. Who wouldn’t enjoy half a dozen native oysters washed down with some Glenmo’?  I know I’d be available for that media trip! 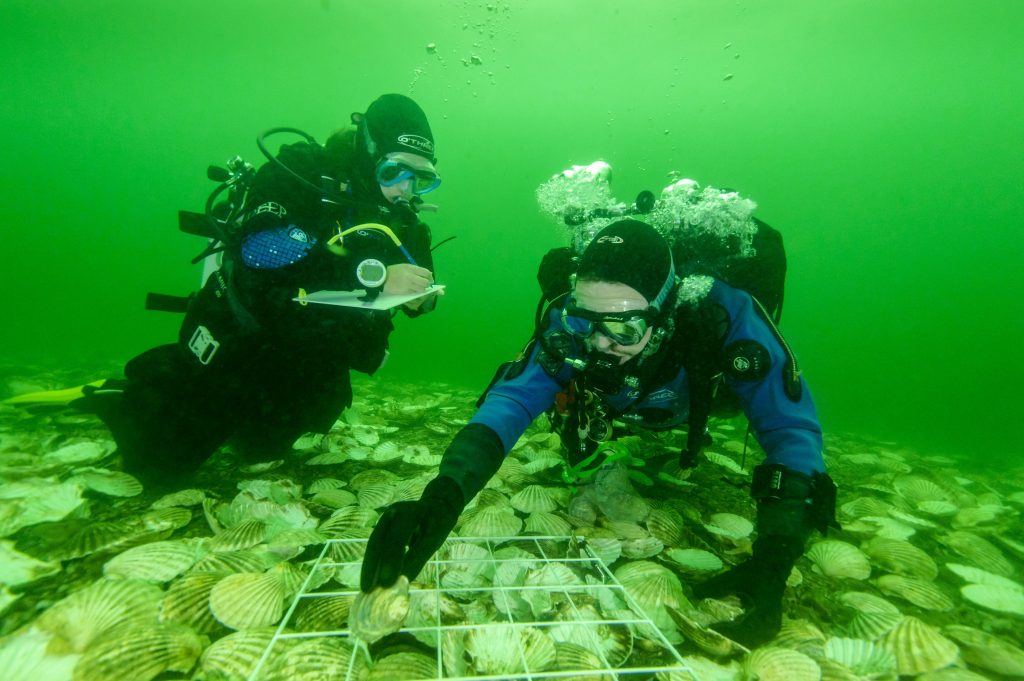 The oyster beds in the Dornoch Firth

Chivas Brothers, justifiably proud of the reduced energy footprint at Dalmunach, is the  lead sponsor of VIBES, the Scottish Environment Business Awards. “We believe sustainable business should be at the core of any enterprise that takes a long-term approach and expects their product to have a purpose and role in society,” says Ronald Daalmans, environmental sustainability manager for Chivas Brothers. Past award winners include Diageo for its work on environmental protection on the Leven site.

Not so very long ago, Dewar’s adopted lightweight bottles for its blends and installed a biomass boiler at Aberfeldy distillery, which was projected to deliver a phenomenal 90 percent reduction in the brand’s carbon footprint on the site. In 2018, Chivas Brothers barred plastic straws and stirrers from all its events in over 100 countries, and campaigned on Twitter to raise funds for the Marine Conservation Society.

And so on… there’s no shortage of whisky brands stepping up to meet the environmental challenges in distilling.  So, greenwashing marketers should take care. Today’s consumers are alert to empty claims and not shy in calling out offenders, with the consequent backlash far outweighing any early wins for brand image.

After Ian Buxton filed this article, he received a short statement from Old Pulteney:

“The Rise With The Tide campaign was developed to tell the story of The Maritime Malt in a new way, giving more insight into how our coastal hometown of Wick has depended on its relationship with the sea for hundreds of years.

Our content series shares personal life stories which mirror our brand narrative. Our first partners (Doug Allan in the UK and Sustainable Surf in the US) were selected for their lifetime of work with the sea, and their craft depending on the same patience that’s required to make a really great whisky. This is just the beginning, with the next phase of the campaign set to reveal more about the $20,000 investment we’ve made with Sustainable Surf to back their projects designed to protect the sea. This is being finalised now and will run this year – we’re looking forward to revealing more on this in the coming months.

Being a responsible member of the community is a value that Pulteney distillery has held for decades. Working in partnership with Ignis, Pulteney has supported a district heating scheme which supplies over 200 homes with renewable energy and utilises the biomass boiler’s steam to reduce the distillery’s greenhouse gas emissions. In recent years, we updated the secondary packaging of our whisky to ensure the design was fully recyclable. Projects such as these continue our ongoing commitment to, where possible, put in place sustainable measures.”