When Philip ‘Pip’ Hills bought with three of his friends a sherry quarter cask from a certain Speyside distillery filled with 10-year-old liquid, little did he know it would mark the beginning of The Scotch Malt Whisky Society. Today, the Edinburgh-based bottler boasts more than 26,000 members across international branches spanning Austria to Australia. We take five with member #001…

“At the beginning of the eighties I discovered malt whisky,” Hills recalls over the phone. “To be precise, I discovered Glenfarclas.” This Speyside gem would go on to be the first of more than 138 whisky distilleries in Scotland and beyond to have its liquid bottled under The Scotch Malt Whisky Society name. A feat made even more remarkable when you consider the ill-health of the Scotch whisky in the early eighties, a period that saw many producers close their distillery doors, never to reopen. How did his fledgling idea flourish in such a trying climate?

“If you add one thing to another, it’s an arithmetic progression,” outlines Hills. “If you double it each time, it’s a geometrical progression, which leads to an exponential curve. If you produce a really good whisky and I give a bottle of it to somebody, and that person has lots of friends – as most whisky drinkers do – if they love it, they’ll give out drams. So out of one bottle, you may have 50 or more converts to that particular whisky. You don’t have to be an arithmetical genius to figure out that the curve of increase just rockets. It becomes almost vertical.” 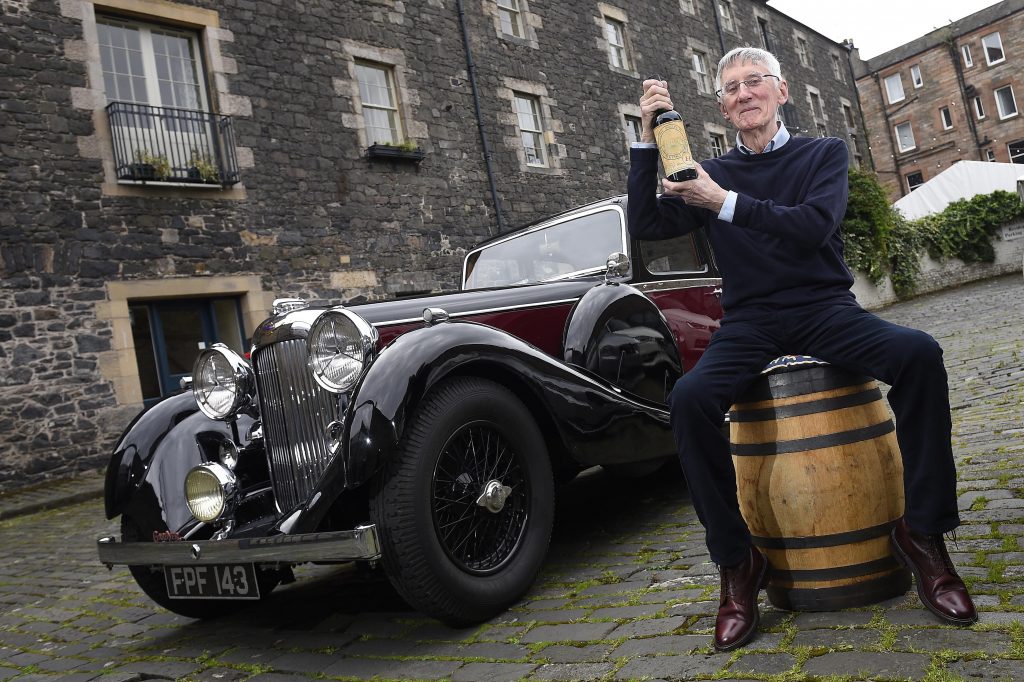 Pip Hills, outside The Vaults, with a 1937 Lagonda, the car he used to transport the first-ever cask of SMWS whisky

Prior to the Society, Hills “never had anything that could remotely be considered a career”. A keen mountaineer in his teenage years – until a climbing accident that almost killed him – Hills spent seven years studying philosophy, working as a docker, a truck driver, and other industrial jobs during the holidays. He “bought a pinstripe suit and became a respectful civil servant” working for the Inland Revenue, where he stayed “for the best part of five years, just to show that I was in earnest”.

From there, Hills set up a tax accountancy firm – “it wasn’t a high-flying tax evasion for rich people sort-of-thing,” he clarifies, “but helping my poor freelance mates get out of some of their troubles” – and even helped to raise £7.5 million to bid for the Scottish Television franchise with friends. “We didn’t get it, which was a relief, because I hadn’t really any interest in television but it was a good idea conceived over drinks in the Traverse Theatre bar one night,” he says.

With The Scotch Malt Whisky Society, Hills had found his calling. But those early days were not without challenges. “The whisky industry didn’t understand what we were doing,” he explains. “And from what they did understand, they didn’t like it much.” Barring a select few, distillers and brands were initially “very, very cagey”, not least because of the industry battle against people making a quick buck by ‘passing off’ imitation whiskies with the use of similar labels.

Trademark laws meant Hills couldn’t add distillery names to Society bottlings – something he turned to an advantage by numbering each distillery instead. “Since the first one we had was Glenfarclas, we made that number one, and we put a point after the number which indicates the consecutive cask bottled,” he says. “Nobody could take out legal action against us, because we weren’t passing anything off. And if you said in a newsletter, ‘if you go down the A96 past Aberlour and take the second road on the left for about three miles, you might just come to a distillery from which this whisky came’, no court would say that was a trademark infringement.”

Just some of the incredible SMWS range

Navigating legalities in this way proved to be an excellent marketing tactic – people liked the feeling of being in-the-know. Not that there was any real difficulty bringing whisky drinkers on board. “If somebody liked whisky, you say to them, ‘well, why don’t you try this?’, and let them taste it,” says Hills. “It was like starting a really good religion. All you had to do was show people the whisky and they would say, ‘God, you’re right!’, and they’d join.”

Hills adopted a policy that still sticks to this day, in which the Society doesn’t pay for advertising. “I’d always said, ‘if this thing is as good as I think it is, we won’t need to advertise’,” he explains. “However after we’d bought The Vaults [in Leith] and established ourselves, I thought, ‘maybe we ought to reach the wider public’.” He flew to London armed with a suitcase containing five whiskies for a meeting with “famously ferocious” wine writer Jancis Robinson, who went on to write a feature for The Sunday Times Magazine.

“The whole thing just exploded,” Hills recalls. “After that I did lots of press – a middle page spread in The Sunday Express, a full page in The Wall Street Journal… David Mamet came over from the US. I took him down to the Society and showed him a few drams and he wrote five pages in Playboy. All that cost me was about £10 worth of whisky. And it went on like that for years.”

While Hills stepped away from the Society in 1995, he’s “absolutely delighted” to see how the company has evolved. “I hadn’t really been back until about a year ago,” he says. “The Society personnel and bar staff are bright and enthusiastic and it’s great, I love it.” Indeed, much may have changed in the decades since the Society was established, but one thing remains constant: Hill’s whisky preferences. “I’m sitting here with a glass of Glenfarclas in front of me,” he tells me, when I ask if his tastes have changed over the years. “Perfectly lovely whisky.”

Cocktail of the Week: The 1796 Spritz